The Face of Escalation: Putin has already escalated the war. Semantics won’t stop him from going further

The Face of Escalation: Putin has already escalated the war. Semantics won’t stop him from going further

President Biden’s impassioned words in Poland over the weekend encapsulate the increasing shock and terror the world is feeling as we watch Russia destroy Ukraine.

But while Biden refused to apologize for expressing his “moral outrage” at Putin’s brutality, a deep fear of triggering WWIII is hindering the U.S. and Europe from direct military action. Inside Ukraine, however, it feels like WWIII has already begun. 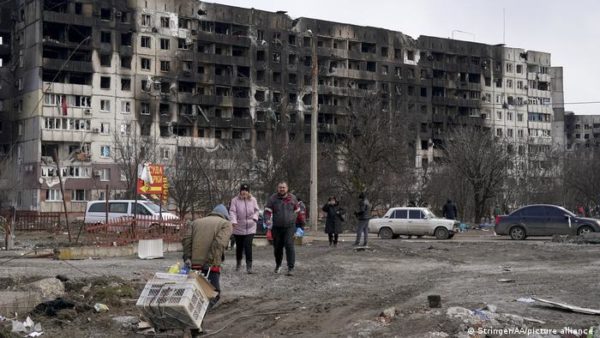 Unable to take Kyiv in a few days, the Russian army is bombing civilians. Unable to take Mariupol, the Russian military launched a siege eerily reminiscent of what Nazi Germany once did to Putin’s hometown of Leningrad. Unable to force Ukrainians to surrender, Russian soldiers are shooting protesters and evacuees and deporting Ukrainian civilians to Russia. Missiles have landed 15 miles from Poland, a bomb-laden drone crashed in Zagreb, and Russia has engaged in nuclear rhetoric and threats against EU members Finland and Sweden. Despite Putin’s claims that he will refocus on the Eastern regions, Russia continues its assault on Kyiv and moves ever further West. President Biden’s visit to Poland was met with increased air strikes on the closest Ukrainian city, Lviv.

This is escalation. And this escalation is not a reaction to NATO troops on the ground. It’s not a response to NATO aircraft in Ukraine’s airspace. It’s a one-sided escalation based entirely on whether Putin is able to get what he wants. Like a schoolyard bully, he seems especially enraged at being denied by a smaller victim.

Asked whether he feared Putin’s reaction to his words, President Biden said: ​​”He’s going to do what he’s going to do.” If this is the case, what should the U.S. and Europe be doing?

We will leave it to the military experts to opine on the optimal military implementation. But as behavioral economists with expertise in game theory and human behavior, we can speak to the importance of having the right response at the right time.

Let’s imagine the best possible scenario: that the brave Ukrainian army, against all odds, pushes off the aggression, goes on a counter-offensive, and reclaims Kherson and Donetsk. What will Putin do?

He will absolutely and certainly pursue all additional avenues of escalation that he thinks he can get away with. It might be chemical weapons, it might be tactical nuclear weapons in Ukraine, it might be “merely” firing endless missiles until there’s not a single building standing in Ukrainian cities.

This escalation will happen regardless of whether Ukrainian forces succeed on their own or with NATO partners. If he feels he needs to justify it, Putin will claim that NATO provoked it. He already labeled sanctions a “declaration of war.” Reality does not matter for him—that much is obvious from watching even a few minutes of Russian state TV.

The absence of a strong response when Russia annexed Crimea in 2014 did not deter Putin from bombing Kyiv in 2022. The lack of a military response to Russia’s attack on military targets in Ukraine did not deter him from moving on to civilian targets. Inaction has not prevented Putin’s escalation, and it will not do so going forward. But action might.

That action can take many forms. It could come from NATO, but it doesn’t have to. It could come from individual signatories (the U.S. and the UK) to the Budapest Memorandum that ensured Ukraine’s sovereign integrity. Or it can come from Ukraine’s neighbors like Poland and Slovakia, if they are free to act unilaterally yet feel assured that NATO’s Article 5 would protect them should Russian forces enter their land or airspace. The action could involve boots on the ground, but it might not have to. Properly and promptly supplying Ukraine with the necessary fighter jets and air defense systems would be a start.

There are many ways to act, but the important thing is to act fast, instead of focusing on what we won’t do and what Putin says he will.

For example, had NATO and its partners also gathered troops for their own “exercises” along Russia’s borders during December and January, Russia would have had to think twice about sending the bulk of its military assets into Ukraine in February. Letting fears of escalation tie our hands is like starting a game of chess by letting our opponent make three moves in a row. Still, even three moves in, it’s not too late to start playing. There is no undoing the death and destruction in Mariupol and Kharkiv, but we can try to spare the same in Kyiv and Lviv. By more credibly signaling its commitment to fight against Russia’s evil war now, the world can avoid having to watch what Putin’s next escalation will look like. If we act now, we still have time to assure that there will be no concentration camps in April, no chemical weapons in May, and no tactical nuclear strikes in June.

Some U.S. and NATO leaders are still in the “pre-escalation” reality of 2014. We hear talk of ceasefires acknowledging Russian control of Crimea and giving away Donbas and debate over the appropriate scale of our moral outrage. Ukrainians voice pained suspicion at the proposed compromises. They know what escalation looks like: They have been anticipating it for eight years and suffering under the full brunt of it for four weeks. Ukrainians are not afraid to fight—they have proven that—but they are afraid of being sold out. They are afraid that the support they receive from the rest of the world will be just enough to guarantee Russia’s continued escalation, and not enough to prevent it.