The First Perception of the Ukrainian Government: First 100 Days in the Office | VoxUkraine

The First Perception of the Ukrainian Government: First 100 Days in the Office

The new cabinet of Ukraine is unprecedented in many ways. Out of twenty members of the cabinet, fourteen members have not served in previous governments. Seven members come from industry and are novices in politics. Three ministers are foreign nationals and were granted Ukrainian citizenship so that they could join the cabinet. The average age of ministers is just a little over 44 years.

Yet, the bureaucracy of the ministries and governmental agencies is staffed with political veterans. The new ministers have been facing the daunting task of identifying competent and honest people who can serve national interests. But the incumbents do not go out without a fight. Being skillful at sabotage, they try to weaken political support for the new ministers, use the judicial system to challenge the lawfulness of new appointments, and even employ thuggish methods such as threats and physical force.

The Ukrainian cabinet serves in the most trying times since Ukraine regained its independence in 1991. Ukraine faces enormous challenges. Its economy is in deep recession, its currency is under attack, the financial system is in crisis, the public confidence is poor. The powerful neighbor Russia employs an entire array of military, political, diplomatic, economic, and media tactics to destabilize Ukraine. The government must act fast to push through structural reforms, stabilize economy, and put the country on a growth path.

VoxUkraine, jointly with KSE/EERC, Index of Monitoring Reforms, Reanimation Package of Reforms, and the Reform Support Centre have prepared a ranking of the first 100 days of the ministries, the National Bank of Ukraine and Naftogaz, the state-owned monopolist in the gas market. 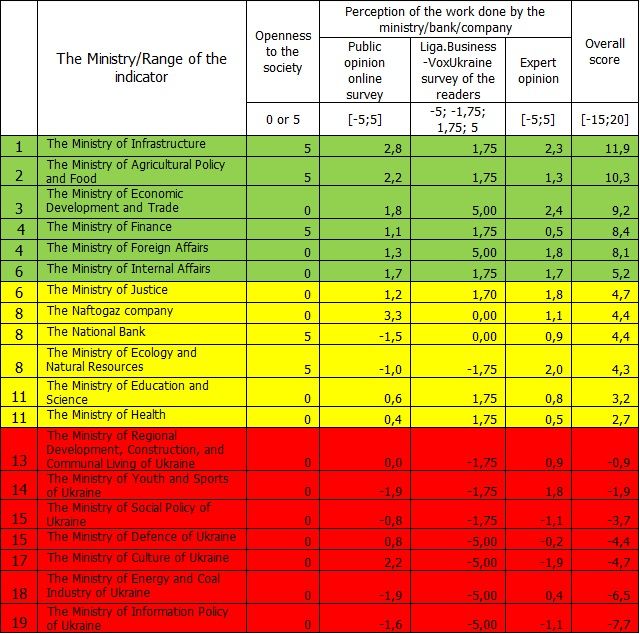 We evaluated how general public, the media, and the expert community see the work of the ministries, the Central bank, and Naftogaz. As the first step, we have sent letters to all the ministries, the central bank, Naftogaz, using the publicly available contacts on the official web-sites and pages in the social media. We asked them several questions about the most notable achievements during 100 days, the major challenges, plans and problems. Only several ministries replied – the Ministry of Finance, the Ministry of Ecology, the Ministry of Infrastructure, the Ministry of Agriculture, and the National Bank. As the second step, we have developed and conducted 3 surveys. The first two surveys – Expert Survey  (128 respondents) and Public Opinion Survey (220 respondents), asked to evaluate the most substantive actions and events reported in the media.  Every event was assessed on a scale from -5 (unsatisfactory) to 5 (outstanding). The Expert Opinion Survey respondents included experts from VoxUkraine, KSE/EERC, Index of Monitoring Reforms, Reanimation Package of Reforms, and the Reform Support Centre. The third survey was conducted by Liga.Business (3017 respondents) and asked for the general perception of the performance of each ministry.

The overall scores for each ministry are presented on the diagram below. 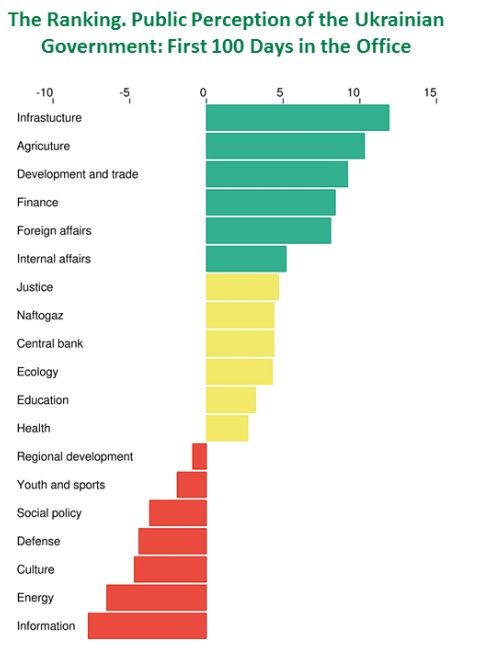 Ranking 2 was made after publication when 2 Ministers submitter their replies. 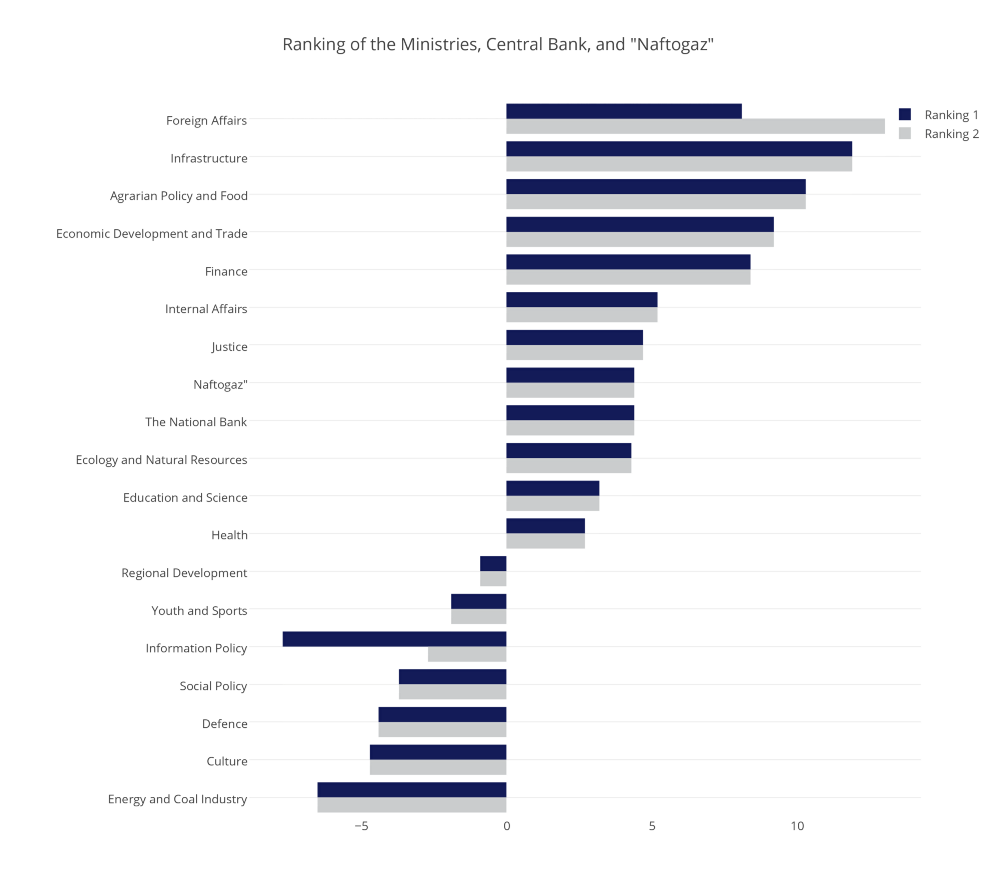 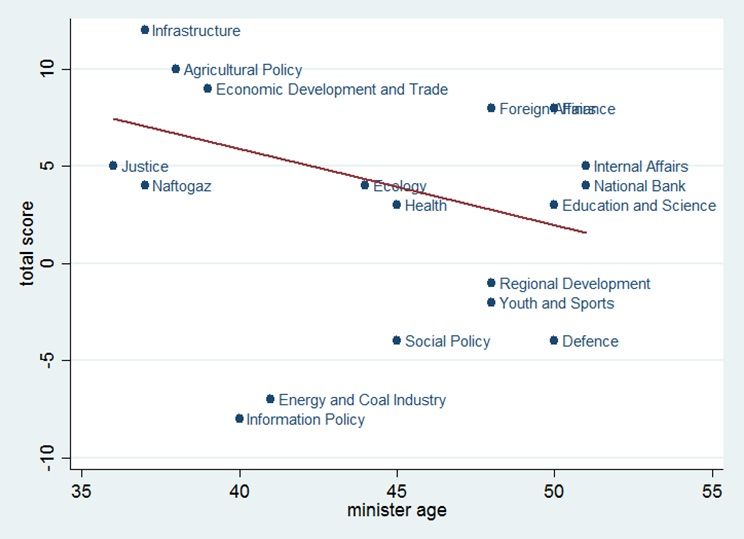 In summary, the government has made significant progress over its first 100 days. However, the society demands more. A lot more! Some reforms obviously require thorough preparation, repeated testing, and thoughtful design, which takes time, but the government can improve its perception quickly and cheaply by radically enhancing its communication strategy. Positive developments appear more apparent to experts than to the public, a gap that can be closed by an aggressive information campaign. Public support is vital for the success of reform and one can hope that the government is going to be more proactive on this front in its next 100 days.

Authors: A working group consisting of members of the Editorial Board, and Contributors of VoxUkraine: