The Good, the Bad, and the Ugly: How Do Tax Incentives Impact Investment? | VoxUkraine

The Good, the Bad, and the Ugly: How Do Tax Incentives Impact Investment?

Governments fund their programs in two ways. They can use the straightforward method of taxing and spending—money comes in and money goes out. Or they can use tax expenditures. These are tax credits, exemptions, or rate reductions which give direct benefits to a subset of taxpayers — often as an incentive to take a particular action—encouraging companies to invest, develop infrastructure, or set up in disadvantaged regions, or individuals to save for retirement, for example. Such tax expenditures overall are non-trivial amounts of money, estimated at 2 percent of GDP in Ghana, 2.5 percent of GDP in Kenya and Tanzania, and 5 percent of GDP in Brazil.

There are arguments for and against “spending through the tax system”. On one hand tax incentives are relatively easy to implement; they don’t require an outlay of cash and they make use of information that revenue agencies already collect. But on the other, loading the tax system with too many policy objectives conflicts with the drive for a coherent, simple, transparent tax system. Tax expenditures are harder to assess than on-budget spending and are prone to special interest lobbying and corruption, and vulnerable to of abuse. Despite decades of advice from international organisations to curtail tax incentives, they remain a popular tool for governments.

While tax expenditures can have different goals (such as reducing VAT on basic goods to make the tax system more progressive), this blog post focuses on tax expenditures used as investment incentives.

Can tax incentives be effective at attracting investment?

An economic case can be made for tax incentives: they offer a means for governments to reduce the cost of capital for high risk new industries, and for mobile capital while maintaining higher rates for general tax collection and location-specific rents. Professor Joosung Jun argues that for countries with large informal sectors and tax evasion pressures, tax incentives can be a means of enhancing productivity and economic grow by preventing firms from shifting into the informal sector or evasion-prone activities. Investment incentives have contributed to the rapid economic growth of countries such as the Republic of Korea, Malaysia, Mauritius, Ireland, Taiwan, and Singapore.

However, if incentives are overgenerous or poorly designed they can result in giving money away without affecting investment and operating decisions. Even worse, incentives can be captured by politically connected firms and used as a merry-go-round for diverting public funds into political finance. And they can incentivise perverse results (such as stretching out investment over time to extend the tax holiday such as was reported in the case of Dangote Cement and the Pioneer Status exemption in Nigeria).

Tax incentives for investment are often provided in response to what neighbouring countries and competitors are offering or perceived to be offering. Could countries and investors “just say no” and stop this race to the bottom?

Effective tax rates ought to matter: they are factored into the discounted cash-flow analyses that large, formal sector business commonly use as the corner-stone of project level investment decision making. Firms consider the projected internal rate of return (IRR) of projects based on the annualised cash flows, on a post-tax basis. Investments only go ahead if the returns after tax exceed the company’s “hurdle rate.”

Figure 1. The effect of tax incentives on IRR and investment decisions 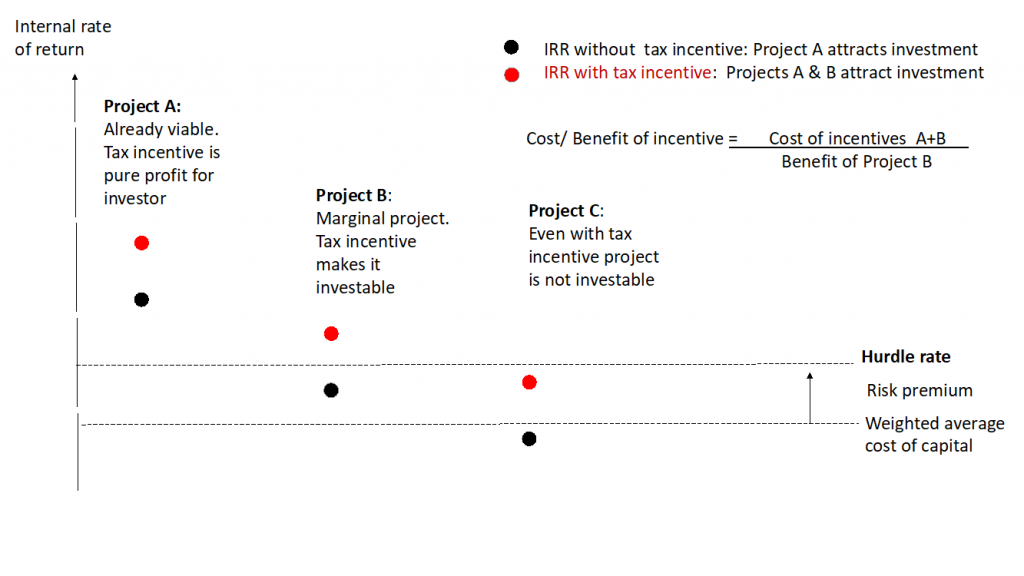 Tax incentives for investment work by changing the internal rate of return. The aim of incentives is to push marginal projects (Project B) over the line into viability. But the overall cost of the incentive also includes the revenue lost by subsidising projects which would have gone ahead anyway (Project A). An illustration of this dynamic is provided by the Stockholm Environment Institute; they looked at the impact of subsidies and tax breaks on oil drilling projects in the United States. They found that with an oil price of $50 per barrel and a hurdle rate of 10 percent around half of the not-yet developed fields are like project B relying on subsidies and tax breaks to become viable—this number goes up and down depending on the oil price and the hurdle rate used.

Why are tax incentives ineffective?

If tax incentives make a significant difference to effective tax rates, and companies factor this into their discounted cash flow analysis, why do so few of them say that it makes a difference, when responding to investor surveys?

One reason is that the tax incentives are most likely to be ineffective in the face of an unattractive investment environment. Policy instability create a triple-whammy against the effective use of tax incentives. Firstly it translates into immediate business costs such as unreliable electricity supply and lack of infrastructure, meaning that the gap to project viability is larger. Secondly the general perception of country-risk raises the investor’s hurdle rate for investment. Thirdly this risk perception also reduces the trust that companies put in the specific tax incentives, leading them to discount the value of tax breaks promised. Thus there are fewer “project B’s,” although there can still be some politically favoured “project A’s” that mop up the tax incentive. 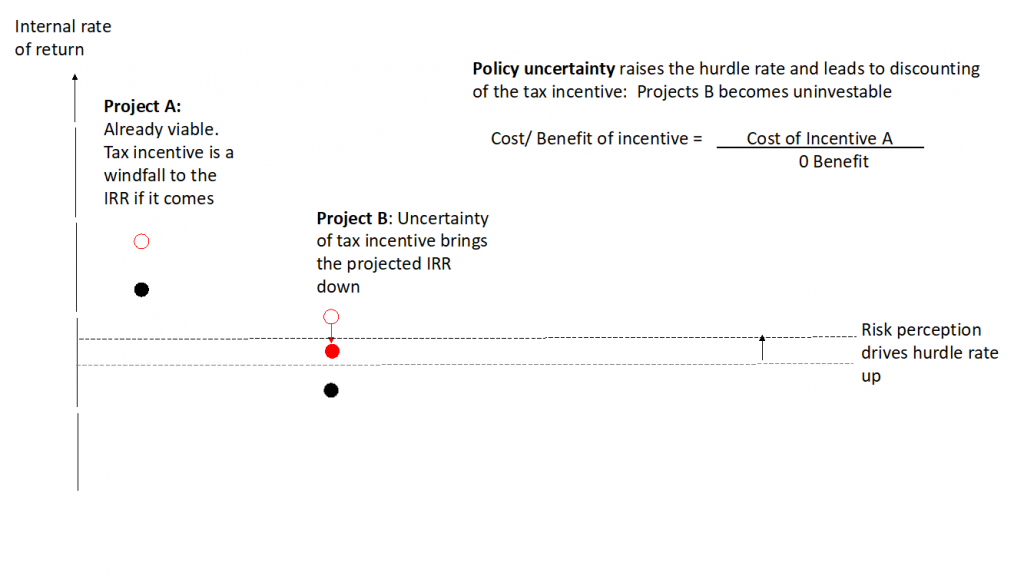 The same story can be told from a political point of view, as Mick Moore argues—in situations of weak democratic accountability and legitimacy tax exemptions are used as tools to generate support and to discourage oppositional activity—they persist because they succeed as a political tool, rather than because they are effective as an economic tool. A study by the World Bank confirms that tax incentives are far less effective at encouraging investment in weak investment climates than in strong ones—with the same difference in marginal effective tax rate having eight times the impact on investment for countries in the top half of the “Doing Business” index than those in the bottom half.

Another reason why the findings of investor surveys do not match up the intuition that effective tax burdens matter, is that they matter differently for different types of business. Exporters (“efficiency seeking FDI”) are very cost sensitive and therefore more likely to respond to tax incentives, whereas companies serving local markets (“market seeking FDI”) will invest anyway (and if they are shielded from competition will simply pocket tax incentives as additional profit). This is confirmed by investor surveys which differentiate between different types of business.

However, this does not mean that all tax expenditures are wasteful giveaways. Notably what counts as a “tax expenditure” in government budgets and public debates and what is considered as a “tax incentive” by business may not be the same thing. Tax holidays where corporate income tax is not charged for five or ten years, spring to mind as a classic tax incentive, but often a larger proportion of what is measured in tax expenditure lists are not these kinds of waivers but the effect of capital allowances and depreciation schedules, and VAT and import tax exemptions. Investors consider these to be part of the basic expected structure of an “investment grade tax system” in relation to business expenses and treatment of losses, and may not view them as an incentive (although they can be equally vulnerable to abuse).

Tax holidays where corporate income tax is not charged for five or ten years, spring to mind as a classic tax incentive, but often a larger proportion of what is measured in tax expenditure lists are not these kinds of waivers but the effect of capital allowances and depreciation schedules, and VAT and import tax exemptions.

For example, Goods and Services Taxes (GST) such as VAT are designed to be a tax on final consumption which companies collect. When businesses are involved in export transactions for which no VAT is charged, or where they make large capital investments, they can end up in a position where they have paid out more in input taxes on their own purchases than they owe to the government, and thus are due a refund. It is also common to offer import tax reductions on capital goods. However, many countries lack a fully functioning VAT refund system (In the World Bank/PWC Paying Taxes study, 43 percent of countries with VAT systems did not give refunds). Tax exemptions are often used instead. While these can result in large on-paper tax expenditures, it should not be assumed that the normal counterfactual situation would be equivalent large VAT revenues for government.

For example, one widely cited study on tax expenditures in Sierra Leone argued that the country loses $240 million USD a year from tax incentives to mining companies, including some $199 m a year of losses from customs duty and GST waivers to and an additional projected million venue loss from corporate income tax of $44 million. Or to put another way, “government tax expenditure in 2012 amounted to more than eight times the health budget and seven times the education budget.” However, these estimates were based on high historic commodity prices, combined with an assumption that goods and service tax exemptions should be considered an ongoing tax cost. In fact, corporate profits were lower than projected (due to the commodity cycle and the Ebola outbreak), while the goods and service tax exemptions were a short-term reflection of tax exemptions used in lieu of ordinary refunds. In practice the government of Sierra Leone has agreed with the IMF to seek to eliminate exemptions worth a much more modest figure of $4 million.

The promise of transparency

While reforming tax incentives is difficult, one area where there is broad consensus is that there should me more transparency; tax expenditures should be disclosed as part of the public budget, and their impact evaluated. Most developed countries, and increasing numbers of developing countries publish tax expenditures as part of their budget. The International Budget Partnership’s survey of developing countries found that almost half of the 102 countries surveyed publish some details of tax expenditures, including Argentina, Chile, Columbia, Dominican Republic, Guatemala, India, Jamaica, Jordan, Kenya, Lebanon, Malaysia, Morocco, Nepal, Pakistan, Peru, Philippines, Russia, Serbia,  South Africa, Sri Lanka, Tanzania, and Trinidad and Tobago.

The details of tax incentives can be complex and it is difficult to differentiate a legitimate adjustment to the tax system from a wasteful giveaway.

The details of tax incentives can be complex and it is difficult to differentiate a legitimate adjustment to the tax system from a wasteful giveaway. The T20 Task Force on International Cooperation in Tax Matters this year called for a standardization of the reporting of tax expenditures. This could support the goal of making both tax systems and tax incentives simpler and more reliable through rationalisation of multiple incentives. However, current tools for assessing tax incentives based on corporate microsimulations and marginal effective tax rate calculations tend to look only at corporate income tax exemptions, rather than VAT and import taxes which, as the Sierra Leone example, shows can be both larger-on-paper and a genuine business deal-breaker.

Perhaps as well a standardized reporting, what we need is a simple rating system for tax incentives that reflects what investors say they need from a reliable tax system, and what governments say they are trying to achieve.