The Heady Brexit Campaign: How the UK intent to Leave the EA will Factor in the UA Issue

Two years after a referendum was held on Britain’s future in the European Union, the political jostling from Members of Parliament within Westminster remains. As Britain’s negotiating position is slowly sketched out in the form of a newly published white paper, it would be wise to consider the effect of Brexit upon Ukrainian-British relations. Britain’s exit from the European Union will alter to some extent the three major pillars where British influence in Ukraine is exerted; these being defence, trade and diplomatic partnerships. Whilst Brexit may be seen as a radical departure from the norm and an event which has consequences affecting all areas of British politics, there is no reason to say that Ukrainian policymakers cannot use Brexit to their advantage for further British-Ukrainian relations, through strengthening existing political and cultural relationships and finding ways to attract further investment into the country.

Although the effects of Brexit upon Ukrainian affairs are quite clear, the government policy which is to act as Britain’s opening negotiation position as agreed by Collective Responsibility looks to be in doubt following the resignation of both Department for Exiting the European Union Secretary, David Davis MP and Foreign Secretary, Boris Johnson MP. These resignations could lead to increasing pressure to alter policy regarding Britain’s inclusion into what is termed as the ‘Common Rulebook’, which governs the standardisation and regulation of goods for trade. Nevertheless, a hypothetical analysis can be undertaken. To this end, it can be argued that trade with Ukraine could be improved upon post Brexit.

Give trade already occurs between the European Union, Ukraine and Britain, the possible regulatory alignment seems unlikely to obstruct upon current trade. This is good news for both British and Ukrainian businesses as Britain is currently Ukraine’s 11th biggest trading partner, with British imports accounting for 799 million dollars in 2017, an increase over the previous year’s 709 million. This was spurred on by a deepening effort by the Department of International Trade to encourage trade between the two nations. Furthermore, Britain welcomes the ongoing dialogue between the EU and Ukraine to ensure continuity of the Association Agreement, which includes a Deep and Comprehensive Free Trade Agreement (DCFTA), which has facilitated more than £1.7 billion in trade between the 2 countries, once the UK leaves the EU. 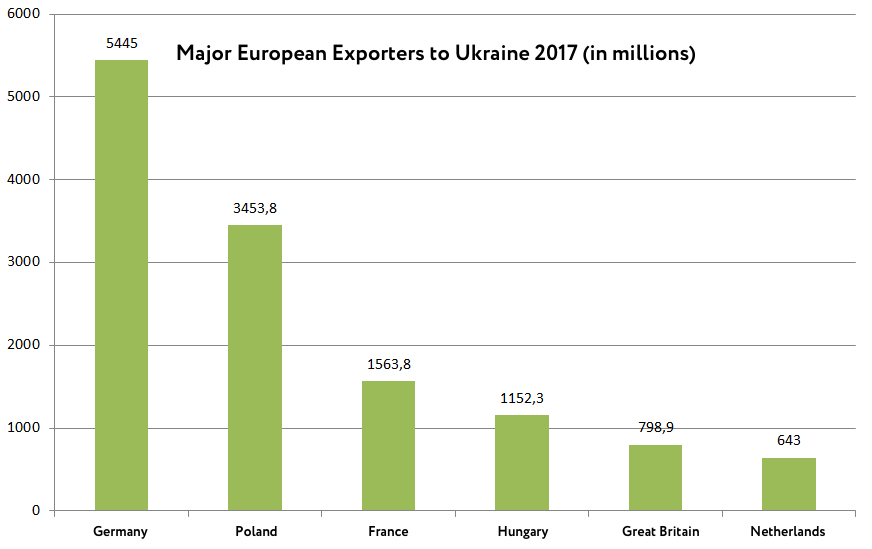 However, following the Chequers meeting at the weekend, the agreed government line is one which allows a degree of European Union control in areas of manufacturing and agricultural goods, with a treaty based commitment for Britain to adopt the position of a ‘rule taker’ following “ongoing harmonisation with EU rules on goods.” This is to be understood as a way of maintaining the free movement of goods and paved the way to the establishment of custom arrangements between the two parties. As far as Ukraine is concerned, given trade with the EU is already in existence, British trade can continue unimpeded if this remains policy. It can be therefore concluded that Brexit does create an opportunity to further trade between Britain and Ukraine, but this possibility is highly dependent upon whichever shape the final settlement takes.

One aspect where Britain’s influence in Ukrainian affairs has been demonstrated substantially is through supporting Ukraine throughout defence and diplomatic frameworks. Britain has been a strong proponent in deterring Russian aggression in Ukraine and this has been something which has manifested itself through a drive to assist the modernisation of the Ukrainian Armed Forces to NATO standards, imposing economic sanctions for Russian individuals in Britain and the provision of British military advisers and non-lethal equipment to Kyiv, all of which will remain Foreign Office policy throughout and after Brexit.

Britain has been a strong proponent in deterring Russian aggression in Ukraine and this has been something which has manifested itself through a drive to assist the modernisation of the Ukrainian Armed Forces to NATO standards, imposing economic sanctions for Russian individuals in Britain and the provision of British military advisers and non-lethal equipment to Kyiv, all of which will remain Foreign Office policy throughout and after Brexit.

Although not an active participant in the Normandy Four negotiations, Britain has been an ever present ally to Ukraine and this is especially the case following the annexation of Crimea by Russia. Whilst Brexit will inevitably pose difficulties for the department, the Foreign Office and its team of diplomats and civil servants are famed for their flexibility and capability to forge ahead in deepening cooperation with other nations. London has, in the past, shown great commitment to the reform efforts of Kyiv, be it through policing, anti-corruption and decentralisation efforts.

Whilst throughout the organs of the EU, Britain has been a vocal pro-Ukrainian member, Ukraine will have to find new allies within the EU in order to achieve its foreign policy objective of accession to the Union after Britain’s exit. Nevertheless, Ukraine will remain a key policy interest for both the FCO and DfIT and one which is growing in importance.

Nevertheless, preparations for a post-Brexit relations cannot happen unilaterally. For Britain and Ukraine to fully realise the potential this could bring, Kyiv should act proactively. Policymakers should be willing to strengthen and deepen existing political cooperation between Kyiv and Whitehall, engage in cultural diplomacy and find additional ways of attracting British investment to Ukraine.

Indeed, Kyiv has already made commendable progress in these quarters. Ukraine has lent its support to Britain in light of the Sailsbury poisonings, furthermore, MPs passed a Magnitsky Act-type of amendment to the Sanctions and Anti-Money Laundering Act 2018, which allows for the freezing of assets in Britain to those committed of Human Rights abuses.

Indeed, Kyiv has already made commendable progress in these quarters. Ukraine has lent its support to Britain in light of the Sailsbury poisonings, furthermore, MPs passed a Magnitsky Act-type of amendment to the Sanctions and Anti-Money Laundering Act 2018, which allows for the freezing of assets in Britain to those committed of Human Rights abuses. Furthermore, given the richness of Ukrainian literature, the arts and the vibrant Ukrainian diasporas found in Britain, a celebration of this through cultural diplomacy ought to be undertaken using retrospective Embassies and Consulates. Lastly, and of key importance to Ukraine, policymakers ought to streamline business practices and push on with the effort against corruption in a bid to attract further British investment in the country. These examples have shown a clear desire for Ukraine to maintain its partnership with Britain and, if continued, this partnership can be strengthened post-Brexit.

Britain’s exit from the European Union will lead to the country reshaping its international outlook and stature. From trade, defence, immigration, science to a new relationship with its European friends. The two parties are negotiating on the principle of ‘nothing is agreed until everything is agreed’, that is to say that the governmental policy as outlined in today’s white paper may not result in the final outcome. Despite this, Brexit offers some opportunities for Ukrainian policymakers when it comes to trade and exercising long held bilateral ties between the two countries. After all, Britain has been a supporter of Ukraine since her independence in 1991 with Prime Ministers and Foreign Secretaries throughout the decades voicing their desire for Ukrainian prosperity. This is an unshakable trait in British foreign policy and will not be diminished in light of Brexit.