The Most Interesting Is Behind The Curtain. What Do The Business Indexes Really Show? | VoxUkraine

The Most Interesting Is Behind The Curtain. What Do The Business Indexes Really Show?

Why are some countries rich and others poor? Why do some poor countries grow rich and others remain poor? Many articles or popular science books try investigate these questions but they do not have an unambiguous answer. Some authors discuss such factors as geographical location or natural resources, others emphasize on institutions, including religion or values, yet other ones stress the decisive role of individuals or historical moments.

VoxUkraine launches a series of publications on changes in business environment that have taken place over the past five years. In the first publication, we talk about two of the most famous indexes that even had been included into President Petro Poroshenko Strategy- 2020, and present to the readers the Index for Monitoring of Reform, which has been produced by Ukrainian experts for four years and evaluates the legislative changes to the “rules of the game”.

Modern models of economic growth necessarily include capital (investment) and labor or human capital. They of course consider other factors that can influence economic growth – such as technology, taxes, interest rates, foreign direct investment, government expenditures etc. However, no model can take into account the entire complex of factors that determine economic growth of a country or its investment attractiveness.

Despite the theoretical and empirical complexity of the issue, there are many popular ratings and indexes that compare countries in terms of economic freedom, democracy, institutional quality etc. Theoretically, these indexes can explain the differences in economic development between countries or their investment attractiveness (Figure 1). However, it is unlikely that someone actually uses them to make investment decisions.

Fig 1.GPD per capita (PPP) and country score according to Global Competitiveness Index 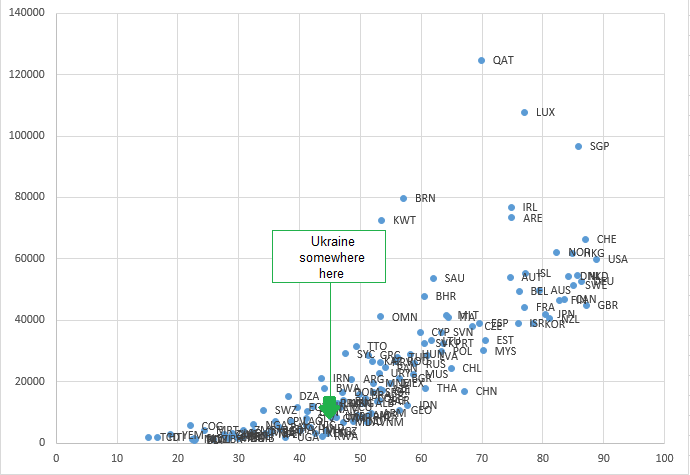 One of the most famous is the Global Competitiveness Index (GCI) calculated by the World Economic Forum. The last available index (2018) was based on 97 indicators, of which 32 were statistical data, 19 other indexes, 47 – data from the survey of senior management of companies (in Ukraine, about 100 executives participate in the GCI survey, while 14000 people are surveyed across the world).

The methodology of the index changes considerably over time – for example, of 118 indicators which entered the 2014-15 index only one third (41 indicators) is comparable to that of 2018 index. Compared to 2014-2015, the 2018 index includes fewer macroeconomic variables, fewer indicators of corruption but more indicators that measure workers’ skills and a country’s innovative potential. Besides, the 2018 index relies more on objective data – only 48% of its indicators come from the survey compared to 66% in 2014-2015 index.

Indicators also migrate between pillars of the index – for example, the number of subscribers of mobile broadband subscriptions between 2015 and 2018 moved from “technological readiness” to “infrastructure”.

Thus, despite its correlation with GDP (Fig. 1), this index rather a tool for drawing attention to the World Economic Forum report than for comparing countries among themselves, let alone measuring progress of a country in time. The most interesting part of it is the actual list of indicators of which it is composed because these are the factors that according to the scientists and experts who produce the rating determine a country’s competitiveness today. In Fig. 2 we provide the index value for Ukraine for 2014-15 and 2018. However, this figure is for illustration only, it does not show the progress or regress of Ukraine in a particular area.

Figure 2. Global Competitiveness Index (distance to frontier) for Ukraine. Pillars written through the dash should read as follows: the first indicator for 2018, the second – for 2014-15. Thus in 2018 the index has a pillar “innovation capability”, and in 2014-2015 a similar pillar was called “technological readiness”. The within-pillar indicators are also different. 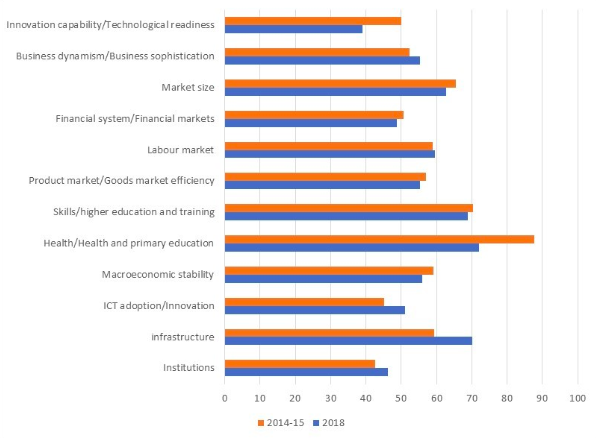 Another frequently cited index is the World Bank’s Ease of Doing Business, which gives an overall assessment of the cost and duration of regulatory procedures. This index is based on expert survey data (13,800 experts worldwide, with an average of 72 from each country). Experts are mainly employees of legal, investment and audit companies, for certain indicators – representatives of the government. For the sake of comparability of the data between countries experts are asked to evaluate the cost of procedures for an imaginary “standardized” enterprise. For example, the duration and cost of business registration are calculated for an LLC located in the largest city of a country, with 5 individual founders, from 10 to 50 employees, starting capital of 10 average per capita incomes etc. (16 assumptions altogether).

The set of indicators on the basis of which Doing Business (DB) Index is calculated varies slightly over the years. Therefore, a country DB rank can be compared over time, but with two reservations.

First, one should check that there were no significant methodology changes in a given year. Secondly, one should remember that the index shows relative, not absolute, progress. That is, if a certain country progresses quickly but others even faster, its DB rank may even worsen.

Figure 3 shows that over the past five years, Ukraine has improved its business conditions faster than other countries, except for property registration. Significant progress has been recorded in getting electricity and trading across borders. Resolving insolvency procedures are the longest and most expensive (however, the adoption of the new Code of Bankruptcy in summer 2019 should change this). Contract enforcement is also far from ideal, which is not surprising given the slow pace of judicial reform. 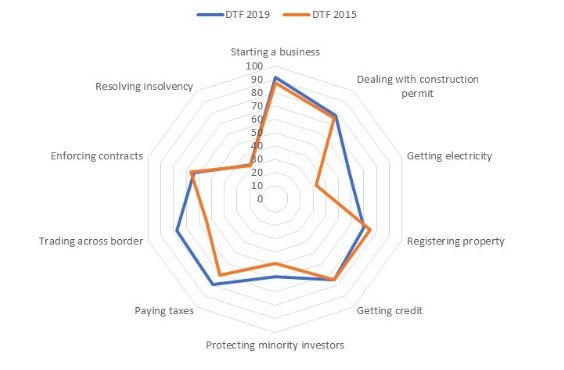 Ukraine’s ranking of competitiveness and ease of doing business have become one of the key indicators of the presidential Strategy 2020:

1) in the World Bank’s Doing Business rating Ukraine will rank among the first 30 positions;

3) On the World Economic Forum (WEF) Global Competitiveness Index Ukraine will be among the top 40 countries in the world;

The desire to increase the country competitiveness was stated by the newly elected Parliament of the VIII convocation. In November 2014, the majority of MPs signed a coalition agreement deciding to implement reforms “aimed at … developing a competitive economy, establishing favorable conditions for doing business, reducing unemployment, creating new jobs …”

Indeed, as shown by the VoxUkraine Index for Monitoring of Reforms (Figure 4), in the last 4 years the majority of reforms were about governance and business environment – changes in these areas received the highest total scores from experts. Of over 800 reformist regulations almost a quarter (208) of changes concerned business environment. How do they relate to the international ratings of Ukraine?

As many observers say, over the past 5 years, Ukraine has adopted more reforms than in the previous 20 years. But what reforms have been implemented? Which of them were very important and what brought only incremental improvements? Have there been changes that actually worsened the “rules of the game”?

To answer these and other reform-related issues, since the beginning of 2015 the VoxUkraine team and a pool of experts grade reformist legislation according to its expected impact on certain spheres of social and economic life (the score is calculated every two weeks based on an expert survey). Over the period of 2015-2018 we evaluated over 800 documents.

Each event can get a grade from -5 to +5 depending on its expected impact on the “rules of the game”. If an event affects a number of spheres, it can collect a total of more than 5 points.

Details of the methodology can be found here.

How does iMoRe relate to Doing Business? The Doing Business reports highlight key reforms in each of the 10 index pillars. We have collected this information over the past 5 years and matched with iMoRe (Table 1).

Table 1.Changes that affected Ukraine Doing Business rank and their іМоRе grades. The table shows actual year of adoption of relevant legislation. The Doing Business is forward-looking, so changes introduced for example, in 2015 can be found in the 2016 report, 2016 changes in 2017 report etc. Reforms that are favourable for business are market with green, adverse to business environment – with red. 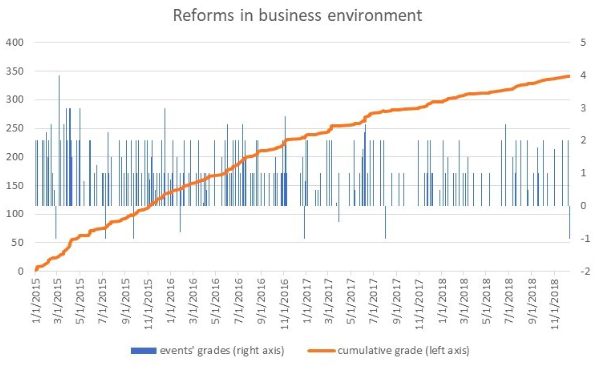 Experts evaluate events on a scale from -5 to +5. The final assessment of the event is the median of expert assessments. However, if an event affects several directions, it can score more than 5 points. During 4 years of evaluation there were a few such events.

Events affecting the business environment received a total of 231.6 points from experts or an average of 1.1 points each. Reforms that simultaneously affected several spheres received higher grades.

9 regulatory acts influenced the business environment and at the same time energy independence. These are the Law on Commercial Accounting for Heat Energy and Water Supply (+4 points), the Law on Energy Efficiency of Buildings (+3.75 points), the Law on the Electricity Market (+4.5 points).

Eight reforms that simultaneously affected business environment and the banking sector also received high average grades: 1.8 for the business environment and 1.5 for the monetary policy and banking component. Among them are the law on strengthening the responsibility of bank owners (+7 points), the law on currency and currency operations (+5 points), simplification of foreign operations of Ukrainians (+4 points).

Three events have affected three areas at once: business environment, governance, and public finance. These were the law on the opening of public procurement information in line with the EU directives (+8.5 points), the Law on creation of an export credit agency (ECA) (-1.25 point) and the tax reform approved in the budget package on December 30, 2016 (+3.5 points)

We will describe reforms that influenced business environment over the past four years in more details in our next publications. 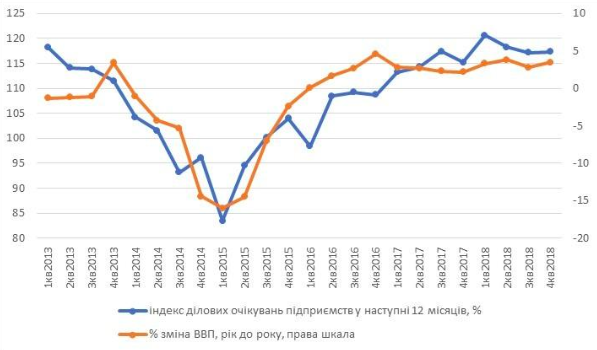