In this article we discuss the “neighbourhood curse” – slower economic development and higher political polarization in countries in the neighbourhood of Russia. Russia has been consistently supporting conflicts within its neighbouring countries or even directly attacking them (Georgia in 2008, Ukraine in 2014). The literature suggests that conflicts, in their turn, increase political polarization, which then leads to proliferation of conflicts. In Ukraine and Georgia, contrary to expectations, political polarization decreased after the conflict because the nations united in the face of the existential threat. A better understanding of political attitudes formation could guide policy interventions aimed to preserve international peace and stability.

Countries cannot choose their geographical neighbours. The “neighbourhood effect”, extensively studied in social sciences, implies that the neighbourhood characteristics (for individuals) or regional characteristics (for countries) affect a wide range of their outcomes. For example, living in a rich neighbourhood indirectly helps an individual get richer. Living in a poor neighbourhood has an opposite effect. For countries, contiguity with a corrupt or politically unstable country increases the likelihood of higher corruption (Becker et al., 2009) and political unrest (Grechyna, 2018) and reduces economic growth (Murdoch and Sandler, 2004). The negative neighbourhood effect occurs through many channels, such as the need for higher government spending to enhance a country’s security, distortions in international trade, higher instability in the bordering regions, and mass migration flows.

Russia is a prime example of a state that has undermined the economic development of its geographical neighbours due to presumably geopolitical or simply ideological reasons. Since the collapse of the Soviet Union in 1991, economic and political development of newly independent countries has been complicated by political instability (Wikipedia lists more than 30 post-Soviet conflicts). Countries such as Georgia, Moldova, Ukraine, Armenia, and Azerbaijan have suffered from violent conflicts directly or indirectly supported by Russia (Jakub, 2019). The economic consequences of such conflicts are straightforward: the decline in economic growth and living standards, the deterioration of future prospects for development, high unemployment, and emigration.

In the political sphere, a persistent struggle between pro-Western (pro-European) and pro-Russian political actors, with the latter consistently promoted and supported in diverse ways by Russia, has led to policy uncertainty and slow pace of economic reforms in countries neighbouring Russia. Another result of this political struggle is significant political polarization in the affected societies: the divergence of individual attitudes towards what policies should be pursued by the government.

In rich and politically stable countries political polarization worsens economic performance, leading to low investment rates and high macroeconomic volatility (Azzimonti, 2011 and Azzimonti and Talbert, 2014). In countries building their way towards democracies, political polarization fuelled by a foreign state poses the threat of sliding towards authoritarianism supported by that state (Svolik, 2019). In addition, violent conflicts and polarization are interconnected (Esteban and Ray, 2011). Thus, inciting regional conflicts could potentially enable Russia to make the affected regions more ideologically distant from the other regions in a given country, increasing regional political instability. If this happens, the “neighbourhood effect” suggests that the countries neighbouring the affected post-Soviet countries will be negatively affected; the neighbours of the countries neighbouring the affected post-Soviet states will be negatively affected, and so on, with the negative impact spreading like circles on the water.

We test whether political polarization was higher in regions affected by Russia-induced conflicts, and whether it increased as a result of the conflicts in Georgia and Ukraine.

One way to measure political polarization in a country is by looking at the regional variation in the share of votes given to a political party/candidate that won a country-wide election (Grechyna, 2022). Figure 1 considers Georgia and Ukraine and shows the average difference between regional and country-wide shares of votes given to the party that won the elections (either presidential or parliamentary), separately for regions that are contiguous versus non-contiguous to the conflict zone, during peaceful times and during the conflict years*. These countries have been characterized as relatively democratic but suffered from violent conflicts initiated by neighbouring Russia. Figure 1 suggests that the regions contiguous to the conflict zone are more polarized compared to the regions non-contiguous to the conflict zone, as expected. However, while polarization generally increased as a result of violent conflict initiated by Russia in Georgia, surprisingly, it decreased following the violent conflict initiated by Russia in Ukraine.

Figure 1. Regional deviation from country-wide support for political elections winner, by the state of conflict and contiguity with conflict zone

Note: This figure reports the average difference between regional and country-wide shares of votes given to the political elections winner, separately for the regions non contiguous (in green) and contiguous (in orange) to the conflict zone, during peaceful times (in columns titled “No conflict”) and during violent conflicts initiated by Russia (in Columns titled “Conflict”).

Figure 2 reports the data on the same measure over time. Regional dispersion of political elections winner’s support did not increase significantly as a result of conflicts in Georgia (1991-1992, 2004, 2008) and in Ukraine (2014-present). In Ukraine it in fact decreased, with the vast majority of the population voting for the same candidate and political party during the 2019 presidential and parliamentary elections. 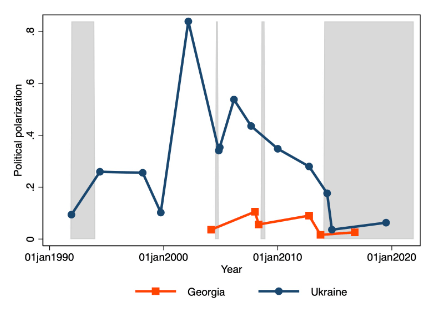 Note: The figure depicts the computed polarization measure based on the averages across regions for Georgia and Ukraine, in squares- are circles-marked lines, respectively; grey shaded areas represent violent conflicts.

The patterns presented in Figures 1 and 2 can be driven by many factors, including time trends, characteristics of political candidates competing in elections, and changes in economic conditions. Table 1 presents the results of empirical estimation of the relationship between regional polarization and violent conflict, controlling for region and time fixed effects, and therefore, taking into account many unobserved factors that can drive the correlation between conflicts and polarization. The negative and significant coefficient on the indicator of “Conflict in the last four years” implies that a violent conflict in the last four years is negatively associated with regional polarization. Similarly, the number of conflict years is negatively associated with regional polarization in Georgia and Ukraine (see Table 1 in the Annex).

Another way to measure political polarization is by computing the divergence of individual attitudes towards public policies (Lindqvist and Östling, 2010; Grechyna, 2016). This measure, computed based on Esteban and Ray (2011) using individual attitudes towards income inequality from the World Values Survey (Inglehart et al., 2020), is presented in Figure 3, for Georgia in red and for Ukraine in yellow. The data suggests that variation of the public opinions has declined in recent years in both Georgia and Ukraine. For comparison, the right panel of Figure 3 presents the same measure of political polarization for Germany, Poland, Spain and the US.

Figure 3. Attitude polarization in a sample of countries

Note: This figure shows Esteban and Ray (2011) political polarization measure based on the attitudes about income inequality computed from the World Values survey for Georgia and Ukraine, on the left panel, and for a sample of Western economies on the right panel, using available survey years.

How can the higher agreement among citizens about political matters coexist with the instability caused by the violent conflicts? One possibility is that the conflicts induced by Russia were a reaction to a positive trend in the development of the neighbouring states, in expectation that these trends can be permanently reversed by the war. Another possibility is that the reduction in the polarization in the affected societies is an unexpected consequence of the violent conflict, with the affected nations uniting against the aggressive neighbour trying to destroy them.

Political polarization can be measured for countries where human rights are respected and individual opinions can be expressed freely. Western allies of the post-Soviet states are themselves politically polarized. The diversity of individual opinions is what eventually drives scientific progress and development. But this diversity also complicates the decision-making process on a country level. There is no (observed) political polarization in Russia or China, because the opinions cannot be expressed freely in authoritarian states. But that is what makes the decision-making in these states easy and efficient. Efficient for the decision-makers – not for their citizens. Or their country’s neighbours. Or the neighbours of their country’s neighbours.

The changes in political polarization in the presence of violent conflicts call for a better understanding of the drivers behind the political attitudes and national identity formation. If there exist ideological, economical, or other triggers that connect diverse social groups in the presence of a common threat, policy interventions based on such triggers perhaps led by international organizations could help maintain international peace and stability.

* For Georgia, the data has been collected from www.electoralgeography.com  and CLEA dataset; for Ukraine, from cvk.gov.ua. The dates of conflicts are taken from the Uppsala Conflict Data Program dataset.  The classification of regions by contiguity to conflict zone is based on governmental data for Georgia (shidakartli.gov.ge/ge/pages/index/47  and mfa.gov.ge/Occupied-Territories/Law.aspx) and authors’ knowledge for Ukraine. Because the years of elections for which the polarization could be computed and the years of conflicts do not coincide in general, conflict times are considered as election years for which a conflict occurred during the four years prior to elections. Overall, dataset consists of  27 regions in Ukraine  and 78 regions in Georgia. See Grechyna (2022) for more details on the data.

Lindqvist E., and Östling, R., 2010. Political Polarization and the Size of Government.

Annex. Table 1. Conflicts and regional divergence of political winner’s support: the estimates based on regional data for Georgia and Ukraine 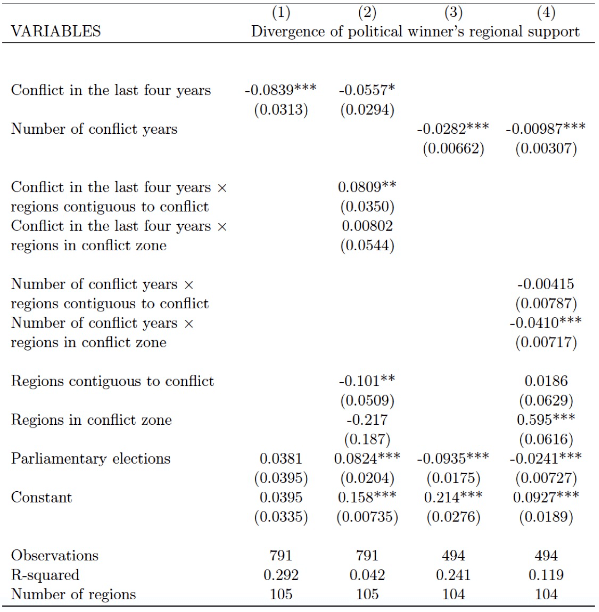 Note: This table reports the OLS estimates of the relationship between conflicts and regional deviation of political elections winner’s support controlling for year and region fixed effects; robust standard errors clustered by region; ***, **, and * denote the significance at 1, 5, and 10% significance level.