The index for monitoring of reforms (iMoRe) is +0.8 points for the period from November 13 – 26, 2017 (+0.7 in the previous round on a scale of  -5.0 to +5.0). Certain positive developments were recorded in legislation regarding public finance, the monetary system and the business environment.  Both positive and negative changes were recorded in the sphere of governance. There were no reformist legislative changes affecting the energy sector.

The major events of the round are changes in procedural legislation and the exception of certain positions from the operation of the law “On Civil Service”. 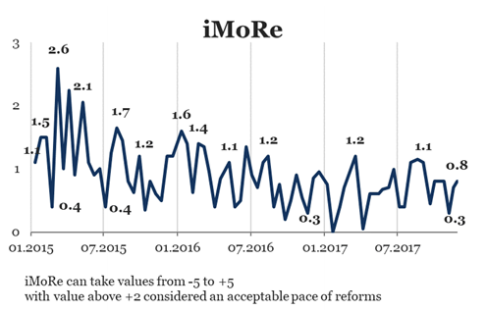 The major events of the release

Ukraine ranks 78th among 113 countries in the Global Rule of Law Index, while the level of Ukrainians’ confidence in the legal system is the lowest among all state institutions (72% of citizens do not trust courts). This problem, as well as corruption, remains the biggest barrier to foreign investment in Ukraine.

The foundations for institutional changes in the judicial system were established in 2015-2016 with changes to the Constitution in the field of ​​justice, laws on judicial system, the status of judges and the High Council of Justice. In particular, the four-level system of courts has been changed to three- level one: instead of courts of the third and fourth instance (Supreme Court, Supreme Economic Court, Supreme Administrative Court and High Specialized Court) the new Supreme Court of Ukraine should function and become the only court of cassation. In November 2016, a competitive recruitment selection of judges was announced, and a year later, on November 30, 2017, the first Plenary Session of the Supreme Court, where its Chairman was elected, took place. The new Supreme Court will begin work on December 15, 2017.

Law 2147-VIII of 03.10.2017 introduces a number of changes in procedural legislation, that are necessary to ensure the work of the three-level system of courts and the functioning of the Supreme Court as the only cassation instance.

The law should also simplify court proceedings and make the trial process more transparent. Among the main innovations in this area is the introduction of “e-justice”. After the implementation of these changes, it will be possible to apply to the court, pay court fees, participate in the consideration of the case and receive the necessary information and documents by electronic means. The law provides for changes in the system of distribution of cases between judges in order to ensure impartial review of cases.

Law on excluding heads of local administrations and their deputies from the category of civil servants, -2.0 points

The heads of local state administrations, their deputies, as well as heads of central executive bodies (CEBs) were the posts of the state service – hence, the appointment of these officials occurred on the basis of the results of the competitive selection in accordance with the Law “On Civil Service”, adopted in a new wording at the end of 2015.

With the Law 2190-VIII of 11.9.2017, these positions were excluded from the category of civil servants. The heads of local state administrations and their deputies will be appointed by the President of Ukraine on the submission of the Cabinet of Ministers. CEB heads, who are not members of the Cabinet, and their deputies will be appointed and dismissed by the Cabinet. At the same time, the provision that the Commission on the issues of the highest civil service should recommend these officials according to the results of the competitive selection, was removed.

The initiator of the law was the President and, as indicated in the explanatory note, such decision was necessary to eliminate the incompliance of the laws “On Local State Administrations”, “On Central Executive Bodies”, “On the Cabinet of Ministers of Ukraine” and “On the Civil Service” of the Constitution of Ukraine in parts of the appointment and dismissal of these officials. 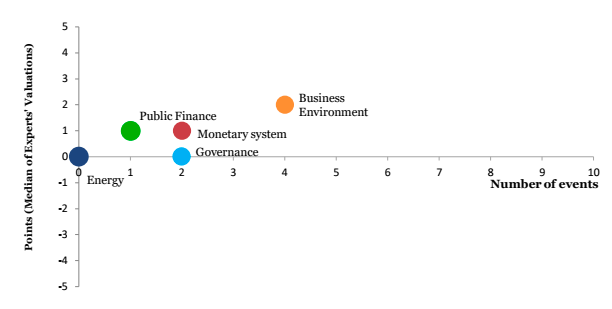