One of the characters in a popular Soviet comedy (an incarnation of a “genuine Soviet person”) said: “I think people should be trusted only in extreme cases”. In this way the authors of the movie formulated one of the main principles of the Soviet state, which controlled and repressed its citizens instead of serving and protecting them. It seems that this view is still popular among the Ukrainian power “elite” which views “ordinary” people as their enemies rather than alliances – and therefore does not trust the society and is afraid of it. Under such conditions, it is hard to expect that people will trust the government.

In the current situation, lack of mutual trust among the citizens and the government is especially dangerous since internal confrontation multiplies external shocks. At the same time, economic research shows that the level of trust in the society positively impacts economic prosperity. A few straightforward changes in the government policy could help to rebuild the trust.

A bit of history

In many aspects, the Russian empire (in its various reincarnations), of which Ukraine has long been a colony, is an antipode of the Western civilization. Thus, it imposes supremacy of the state over an individual (people should be tightly controlled by government while the government is not accountable to people), practices presumption of guiltiness, believes that each game is zero-sum and values loyalty much more than professionalism.

During the Soviet time, these features of the Russian empire were disproportionately developed. Since Communists (the Bolshevik party) overtook the power through an armed coup in 1917, they had always been afraid that their illegitimate government would be overthrown by people, and therefore tried to retain the power through lie and terror. Thus, in USSR millions of people were killed or imprisoned, and tens of millions were paranoically looking either for “imperialistic spies and enemies” or for KGB agents even among their closest friends and relatives. This situation resulted in a steep decline in both horizontal and vertical trust.

In short, the criminals that ruled the USSR tried to replace the “old-fashioned” moral principles with their own imperative “don’t trust, don’t be afraid, don’t ask”. Unfortunately, they had largely succeeded. However, while optimal for criminal environment where no one knows whether he will live until tomorrow, this principle is unsuitable for building of long-term social relations, such as a state. So there is no wonder that the Soviet Union collapsed.

After its collapse, one of the major challenges for post-Soviet people was learning to trust each other again. In Ukraine, popular movements of 1989-1991, 2002-2004 and 2013-2014 have had a very favourable impact on horizontal trust (between the people). However, vertical trust remains a problem.

Figure 1 below shows that while the level of trust to peer citizens has considerably increased during the last ten years, trust to government institutions remains far below. There is no data for 2014 yet but we suppose that there should be a further rise of the horizontal trust and at best a moderate increase in trust to the President and the Cabinet of Ministers. 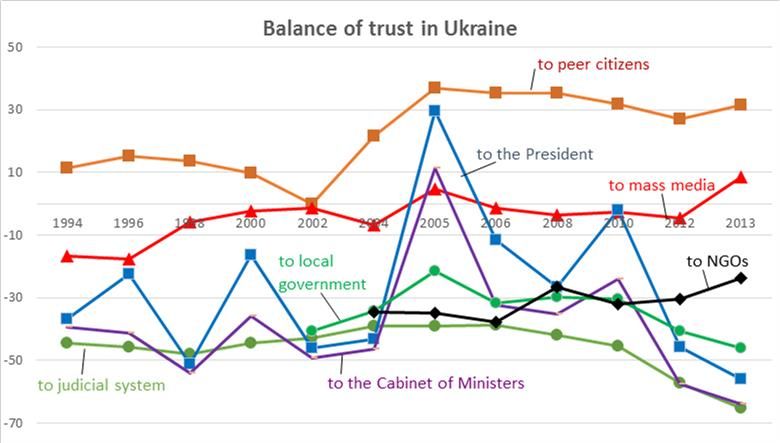 Currently, we can distinguish two main problems with trust in Ukraine:

These two problems prevent people’s trust to government from rising, and may indeed lead to social unrest.

Possible solutions to these problems are simple and straightforward:

I think, the majority of people understand the dangers of a third Maidan and don’t want it to happen. There is not much fun in freezing in the streets instead of working either. However, the aim of the first and second Maidans was a state governed by law rather than thugs. If we see that the old system is restored, we’ll simply have no other choice.

The last part of the article is a brief overview of economic research related to trust, so if you are short of time you can skip it. It shows that higher level of trust within a country leads to greater prosperity.

Evidence from economic research: trust is positively correlated with well-being

Although hard to measure, trust is a very important asset in an economy. As Kenneth Arrow (1972) formulated, “It can be plausibly argued that much of the economic backwardness in the world can be explained by the lack of mutual confidence.”

Therefore, trust has received considerable attention of economists (e.g. an overview of Algan and Cahuc (2013), Ebert (2007) or Jordahl (2007)). On the country level, trust is measured with surveys, as answers to questions like “do you think that the majority of people can be trusted or that you need to be very careful?” On the individual level, trust is measured both with surveys and in laboratory experiments.

The main findings of economic studies related to trust can be summarized as follows:

Figure 2. Correlation of trust with per capita GDP and income inequality 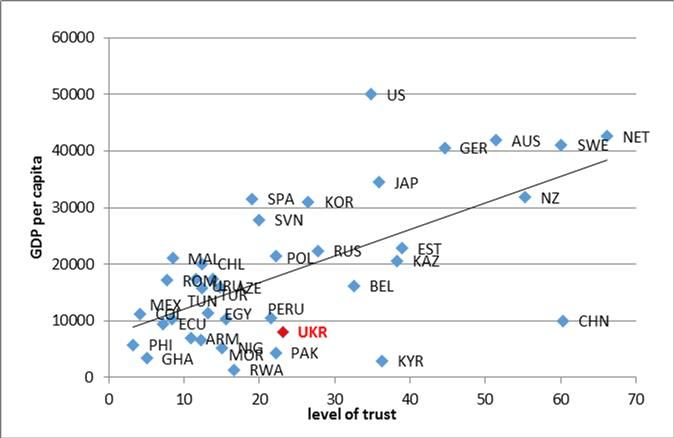 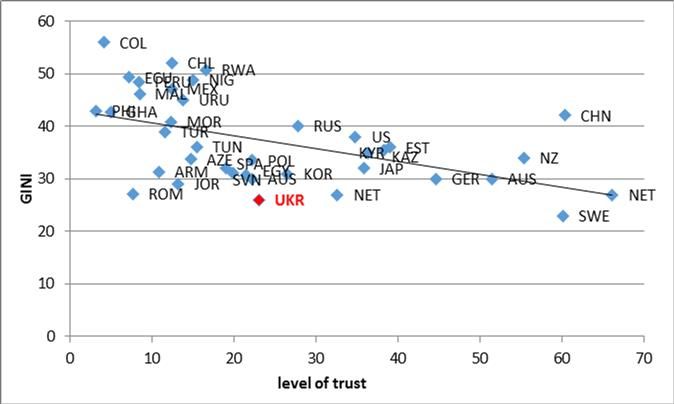 Source of data: Trust data is derived from the World Values survey 2010-2014 wave. The survey contains the question: “Generally speaking, would you say that most people can be trusted or that you need to be very careful in dealing with people?” with two possible answers: “Most people can be trusted” and “Need to be very careful”. The level of trust in a country is proxied by the percentage of people who chose the first answer. GDP per capita (2009-2013 average) and GINI coefficient are derived from the Worldbank data.

Of course, correlation does not imply causality and, most probably, the impact is mutual. However, taking into account the endogeneity issue, quite a few studies have found that trust positively impacts growth and employment (e.g. Dincer&Uslaner, 2007). However, other authors note that very poor countries can fall into the “low-trust trap”, and in those countries higher levels of social trust do not lead to higher economic growth. Results of another study (Bjonskov&Meon, 2010) suggest why. The authors find that trust enhances TFP and TFP growth through property rights enforcement (i.e. a working judicial system).

Other studies also stress the importance of institutions for enhancement of trust  (e.g. Bidner&Jackson, 2012).  So, the causality runs the following way:

This evidence again supports the argument that a properly functioning judicial system is an absolutely necessary precondition for the success of economic reforms.