Pervasive Russian propaganda appears to be quite effective not only in Russia itself, but also in some Western countries. Andrii Tymofeiuk explains the Kremlin tactics and recommends how to refute Russian lies. All the fakes must be immediately responded to, and Ukraine has to counterattack damaging the rival’s image.

The “hybrid” war that Russia is leading against Ukraine is an excellent example of how some invented narratives can become reality, how TV lies and hatred can result in real people taking weapons and going to fight their long-term “brothers” who have suddenly become “fascists”.

Pervasive Russian TV propaganda has created “tectonic faults” not only between the nations but often within families – when some people more readily believe “speaking heads” on their TV sets than their family and friends.

Unfortunately, many people in the West still think of Ukraine and former USSR republics as “Russia.” At the same time, many influential commentators continue to assume  the viewpoint of Russia, and it is difficult for Ukraine to overcome the trend. Ukraine has support from the majority of the governments in the world, but its popular support remains rather weak. On the other hand, while Russia has much more money for propaganda, Ukraine has much more powerful weapon – the truth. So, with proper usage of this weapon, gaining  wide popular support for Ukraine abroad is quite a manageable task.

Below, I propose the tactics and strategy for implementation of this task.

2014 was the most important year in the history of Ukraine as a sovereign state. We saw the EuroMaidan Revolution, the annexation of Crimea and the war in Donbas.  These three developments led to tremendous changes within the country.   The Ukrainian people were forced to fight for their Motherland on the fields of Donbas immediately after the victory over dictator Yanukovych. We face a huge and powerful enemy, and we can’t win this battle without significant support from our allies. This enemy attacks Ukraine not only by weapons but also through a well coordinated information war.

President of Ukraine and Commander-in-Chief Petro Poroshenko with the soldiers in Donbas © Ukraphoto.com

Ukraine should more actively inform the people in the world, and specifically, the EU voters, about these events.

Unfortunately, the logic of Ukrainian patriots who say, “It is obvious, that we are good guys, and pro-Russian separatists are bad guys; all the civilized world will support us for sure!” hasn’t worked. An average European citizen doesn’t really know what is going on in Ukraine and, honestly, doesn’t really care about Ukraine. Just as an ordinary Ukrainian has little knowledge or interest in the situation in Nigeria, Syria or Sudan. Moreover, an ordinary European doesn’t really understand that through the annexation of Crimea, Russia crushes all the international post-WWII agreements that secured the borders within Europe. Russia’s actions also give a reason for countries to continue developing a nuclear deterrent (Ukraine had withdrawn all its nuclear weapons in 1990s – and now it is being attacked despite of given guarantees in Budapest).

We can’t expect all this geopolitical understanding from an ordinary European, therefore, we need to have a good image of Ukraine in the heads of European citizens to give their country leaders  a possibility to support Ukraine more actively. Right now our image is relatively bad mostly due to massive Russian propaganda. Of course, we also want to have a good image for the people of the USA, Australia, Brazil and other countries. However, European countries are much closer – both geographically and economically, so EU citizens must be our target audience.

Currently, the Kremlin pays a lot of money to its own propagandists, or so-called “journalists”, from TV-channels like Russia Today, and also to “experts” from  Western countries to influence the minds of the Europeans. They are trying to deliver the following key 7 Messages: 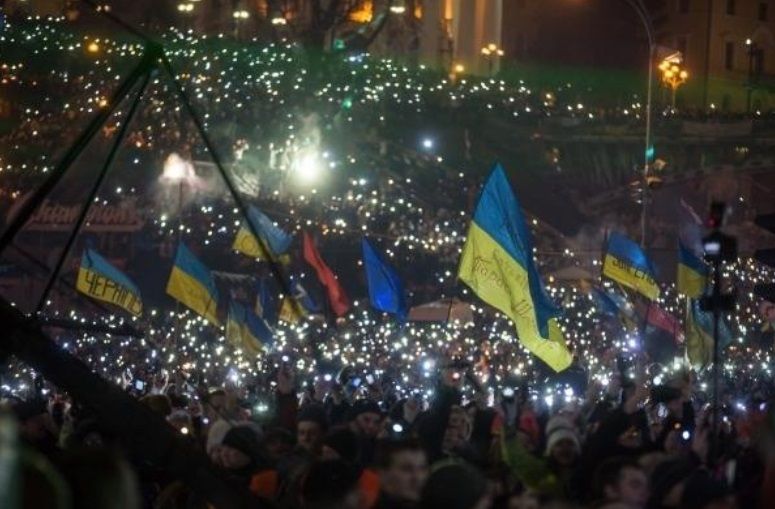 Our advantage is that all of these statements are actually lies.

24 hours a day, 7 days a week Kremlin’s propagandists work on delivering these messages to the Europeans. It is even funny that depending on target audience, propaganda varies significantly. For example, while they try to scare the Europeans by telling them of the Nazis in Ukraine, they tell Russian TV-watchers that it was the aggressive Europe that  brought Nazis to rule Ukraine. Russian propaganda is very well financed and has been effective, but it also makes a number of mistakes mistakes and produces too much fake news. We can take advantage of these weaknesses.

What should our  optimal tactics be in information war against Kremlin? 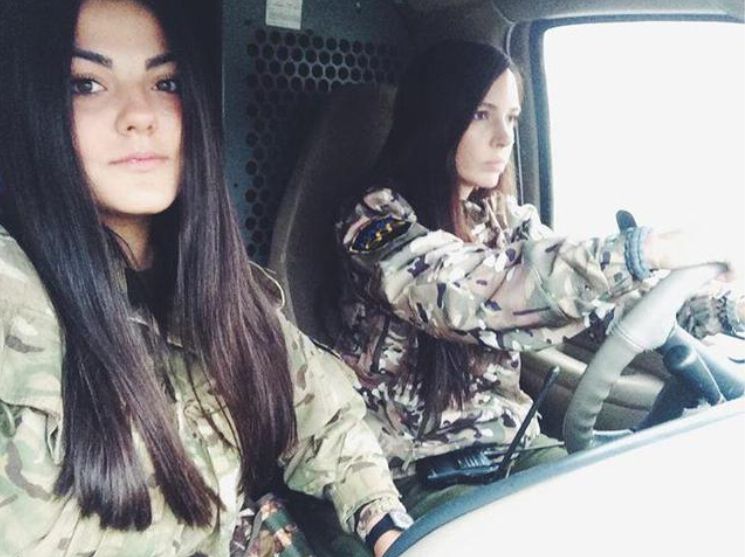 Ukrainian volunteers from ArmySOS group bring equipment to the Ukrainian soldiers which is bought using donations. The Ukrainian Army has never seen so much support from the Ukrainian people as today. © ArmySOS

To illustrate the the first point, we provide here short and clear messages refuting the above-stated 7 Russian lies about Ukraine.

1) “The EuroMaidan Revolution wasn’t made by Nazi radicals. People from different regions with different political positions supported it. It was a peaceful protest when it began on 21st of November 2013.  The public protested against former President Yanukovych’s decision not to sign Ukraine–European Union Association Agreement.  Clashes occured  after the “Dictatorship laws” (the laws significantly limiting rights and freedoms of citizens, among them the right for peaceful protests) were passed by Verkhovna Rada (controlled by pro-Russian Party of Regions) on January 16th and signed by Yanukovych the following day. The EuroMaidan Revolution was a protest against corruption, against a pro-Russian dictator and kleptocrat Yanukovych, and against his intention to lead Ukraine towards Russia instead of going closer to Europe.”

2) “Yanukovych fled Kyiv on 21st of February 2014. Presidential elections happened in May 2014. Parliamentary elections were held in October 2014. All the elections ended successfully – an absolute majority of Ukrainians supported pro-European forces. Now Ukraine has a legitimate Government, a legitimate Parliament and a legitimate President.”

3) “Current Ukrainian leaders are definitely not Nazis and they haven’t made a totalitarian state. There is no discrimination of  Russian-speaking people in any region of Ukraine. Everybody can speak Russian everywhere in Ukraine. In fact, the President, the Prime-Minister, the Central Bank head and a few ministers are Russian speakers”.

4) “Crimea is occupied by Russia without any doubt. Ukrainians and Crimean Tatars suffer a lot as inhabitants of the occupied territory. Putin acted like Hitler in 1938 when Sudetenland was annexed. Russian soldiers took off their official military uniform and captured administrative buildings and military bases pretending that they were civilians from Crimea (for example, in this propaganda movie Putin confesses that Russian special forces were involved in organizing the referendum in Crimea). This totally fake “referendum” took less than a month to prepare, and there is evidence that its results are falsified. Ukraine didn’t fight for Crimea because its former President Yanukovych, who is hiding in Russia right now and had been Putin’s string-puppet during his presidency did everything possible to destroy the Ukrainian army. Ukraine was not ready to begin the war against one of the biggest countries in the world in February 2014. But now it is ready. In order to avoid a full-scale war between two biggest countries in Europe in the future, Crimea must be returned to Ukraine.”

5) “The Ukrainian army acts according to the law. It protects its own citizens and the order in the country. People of Donbas haven’t ever created their military forces by themselves. Their military forces were created and supplied by Russia. LPR/DPR’s military forces mainly consist of not the Donbas workers but of the local gangsters, Russian radicals, mercenaries from the former-USSR countries and soldiers of the Russian Federation who are “on vacation”. They are headed by Russian special forces and army officers. Unfortunately, some local Ukrainians who live in LPR/DPR are forced to join its military forces  in order to survive (because there are little jobs left, and because they are “mobilized” by force).  An absolute majority of Ukrainians support Ukrainian army. Army volunteer movement is extremely popular in Ukraine. “

6) “The war in Donbas was organized by Russia. Through an open border it sends lots of specialists to train separatists, provides them weapons (the material about Russian tanks © Inform Napalm) and sends its own soldiers to help them (for example, special forces © Inform Napalm). LPR/DPR’s military forces are fully equipped with military technique: tanks, air defense systems, multiple rocket launchers etc.   There is absolutely no chance for LPR/DPR to have so many weapons without Russia’s help, considering that LPR/DPR’s regions don’t have a developed military industry. Strelkov, Boroday, Kozitsyn, Babay, Bezler, Motorola and other leaders of the first stage of the conflict are the citizens of Russian Federation. LPR/DPR’ army seizes civilian houses, shoots from there at the Ukrainian forces and makes them to answer by return fire in order to accuse Ukrainian soldiers of destroying homes of #saveDonbasspeople. Malaysian Boeing was shot by separatists using Russian weapon. There is no civil war in Ukraine. Russia attacked Ukraine. It is a sneaky undeclared war.”

7) The answer to this message (“Ukraine is a failed state”) is provided  in the second part (Strategy).

The winner of MindSketch February Competition