Ukrainian economy is both energy-inefficient and energy-intensive. While there is a clear need to promote greater efficiency of energy use, Ukraine has no funds to actively promote massive green energy projects 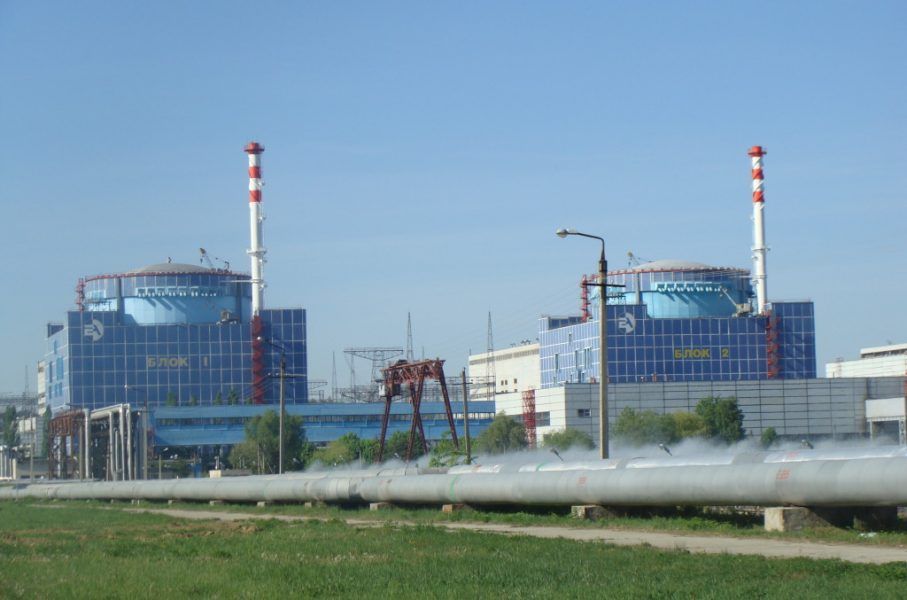 Ukrainian economy is both energy-inefficient and energy-intensive. While there is a clear need to promote greater efficiency of energy use, Ukraine has no funds to actively promote massive green energy projects. Therefore, in all likelihood burning hydrocarbons (coal, oil, and gas) and nuclear fission will continue to be major source of electricity production in the next 20 or so years. One of the ways to improve the situation is to uprate existing reactors as has been done in other countries.

Energy is a national security issue for Ukraine. The structure of Ukrainian energy market is undergoing a drastic transformation. Ukraine relies on imported gas and over the last year it has substantively diversified its supplies away from Russia. Ukraine has also lost control over territories that supplied coal for thermal power plants. As a result, it has now faces a choice to import coal either from those territories, from Russia, or from other countries. Ukraine also imports almost 100% of its nuclear power plant fuel from Russia with planned expansion from the USA (in 2015 14 out of 15 reactors were supplied by Russia and 1 by the USA’s Westinghouse). This winter we have seen regular electricity blackouts electricity shortages led to regular blackouts in most of the country last winter.

The national government has undertaken some steps to improve incentives for efficient use of energy and to eliminate distortions in energy markets, in part, to limit consumption of energy and reliance on import. The tariffs have been increased, and modernizations programs and structural institutional reforms are underway. On the supply side, the reforms in Ukraine have predominantly focused on restructuring gas industry (see this recent interview by the head of Naftogaz, in Ukrainian).

This is not enough. Ukraine must also search for ways to increase its capacity to produce electricity, and increase efficiency of the existing electricity generating plants and electricity transmission infrastructure. Roughly half of electricity power generation in Ukraine comes from nuclear power plants (NPPs). Currently, there are 4 NPPs with 15 reactors that have declared net capacity of 13.17 gigawatt (GWe).

The existing plants can be uprated to increase their production. This will make energy cheaper, and will decrease reliance on coal, and through substitution effect can somewhat limit demand for imported gas.

The pros and cons of this approach are discussed below.

Ukrainian economy is both energy-inefficient and energy-intensive. In Ukraine, GDP produced per unit of energy is one of the lowest in the world. In addition, the national economy has a notable share of enterprises, which, even if efficient, requires a lot of energy to operate (e.g., steel mills). Thus, while there is a clear need to promote greater efficiency of energy use, there are limits imposed by the current structure of the economy.

It is expected that during the next 20-30 years most countries will increase their electricity consumption. Of course, generation should increase as well. Generation is possible from a variety of sources, including hydrocarbons (in Ukraine chiefly coal), nuclear fission, different renewable sources (hydro, wind, sun, biomass, tides, etc). Despite the notable increase of ‘green’ generation during the last 20 years, especially in Western Europe and North America, its share in total generation remains small at about 5-20%. Germany, one of the world leaders in usage of renewable energy, was able to increase its share to 31% in 2014, but even there generation by thermal power plants working on coal exceeds all renewables combined (220 GWh vs 140.4 GWh). According to the WSJ, Germany’s bet on green energy may undermine its long-term competitiveness.

In terms of its world stance in nuclear energy, Ukraine is ranked 8th in terms of capacities and 4th in terms of share of generated energy by the NPPs. Zaporizka NPP is largest NPP is Europe and 5th largest in the world.

Ukraine has no funds to actively promote massive green energy projects. There are also political and budget considerations: the Ukrainian government has lowered tariffs on solar energy in early 2015 due to political pressure to reduce budget deficit. Therefore, in all likelihood burning hydrocarbons (coal, oil and gas) and  nuclear fission will continue to be major source of electricity production in the next 20 or so years.

There are several ways to increase capacity of nuclear power plants, which differ is their effect and price tag [details can be found here and here]:

From what can be guessed from open sources, the government most likely intends to make a stretch uprate. There are arguments for and against such a modernization. 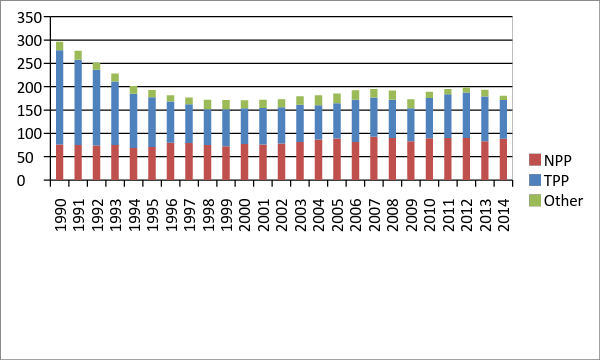 3. Cheaper energy. Current sell price of electricity generated by NPPs is 423.84 UAH per MWh, and for generated by TPPs is 862.05 UAH per MWh. These figures should be taken with a bit of salt because representatives of both types of power plants claim that current prices do not fully cover their full costs. However, an important point is that similar difference exists in other countries as well – fossil fuels are competitive with nuclear power only if their easy-to-extract deposits are close to thermal power plants. In Ukraine main competitor is coal, its deposits are quite deep and hard to extract, so coal mining requires massive subsidies from the state budget. Moreover, currently a large share of the mines are located on territories that are not controlled by the authorities and purchase of coal (and electrical power) from this regions may finance terrorists, thus has a very strong externality. Note, however, that any additional capital investments most likely will be included in tariff, exact extent of growth depends on cost of modernization and repayment schedule.

4. No need to struggle with local community, as is usually the case with new plants. Ukrainian people that were hit hard by Chornobyl disaster are extremely sensitive regarding construction of new NPPs. At the same time finishing reactors on Khmelnitsky and Rivne NPPs in 2004-2006 was made without notable protests.

5. Modernization extends life of NPPs and improves safety. Most of the reactors were installed in the 1980s and originally had 30 year exploitation term. Currently the term was prolonged for the reactors for 5 years, and it seems unlikely that Ukraine will shut down reactors in near future. 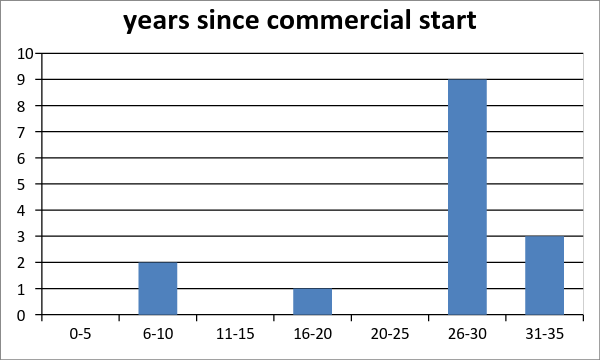 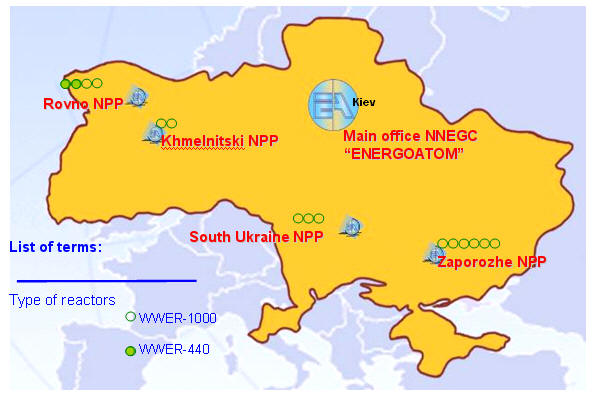 4. Is increase in capacity safe? Ukrainians remember Chornobyl catastrophe and certainly wish to minimize the change of its repetition. In support for safety one can name the fact that Chornobyl NPP had different reactors (RBMK) than any currently operating in Ukraine (VVER). VVER reactors currently constitute the majority of operating reactors in Central and Eastern Europe. It is the type of PWR (Pressurized water reactors) that is assumed one of the safest type of reactors in terms of accidents that lead to radioactive contamination, and PWRs have been uprated in the USA and other countries since the late 1970s [156 approved uprates to date]. VVER reactors, of the same type as present in Ukraine were uprated in Slovakia, Hungary, Czech Republic.

5. Does infrastructure to transfer additional power exist? When Khmelnitsky NPP R4 was finished in 2004 the problem was that power lines that connected it to the grid were inadequate. Bearing in mind that electric power to be transferred over long distances (in case when western NPPs supply central and eastern Ukraine) the power grid most likely will demand upgrade as well.

Ukraine currently faces problems with electricity supply that caused almost regular blackouts during last winter. Improving the situation will have a positive effect on both economic growth and standards of living. The country has notable potential in nuclear power generation. One of the ways to improve the situation is to uprate existing reactors as has been done in other countries. However, the decision about an uprate should take into account not only NPPs per se but their location and availability of adequate grid connection. On demand side a question of load curve should be addressed, possibly by changing tariff policy.