The fact that there is considerable support for the “people’s republics” among many groups calls for some deeper reflection as to its underlying causes. What complicates the matter is that the Donbas hosts a significant population that carries a “cosmopolitan” Soviet identity. Thus, rather than being divided between Ukrainians and Russians, the Donbas is divided between people who believe in the concept of Ukrainian sovereign statehood and those who are nostalgic of the Soviet past.

By the time the Donbas conflict will have settled, assuming Kiev will succeed in regaining control over the occupied territories in the Luhansk and Donetsk oblasts, the Ukrainian government will have to come to terms with the consequences of a number of divergent narratives to which the population of these regions has been exposed. These narratives concern Europe and the West, the Maidan, and the cause and purpose of the current war. To be sure, variations on the theme have been present during the entire period of Ukrainian statehood, so the problem is not a new one. However, it is not until recently that the problem has been identified as a matter of national survival rather than as a mere serious concern. The commonplace, almost bland, metaphor of Divided Ukraine has suddenly assumed a new meaning, and its implications carry an unforetold degree of urgency.

It is important to note that Divided Ukraine’s divisions are neither ethnic nor linguistic, as the Kremlin would want us to think, but social and cultural. The calamity in the Donbas is not about what languages are spoken there, nor is it a matter of who is Russian versus Ukrainian: ethno-national identities are (were) blurred, while the Russian language is ubiquitous. Until recently, being Russian or Ukrainian was not a matter of great concern (Barrington 2002), and over two decades of research on national identity and foreign policy preferences (i.e., geopolitical orientation) in the Donbas show that statistically recorded ethnicity is a moderate predictor of pro-Russia sentiment at the very most. Instead, the imprint of class-based and demographic cohort effects is more manifest (Pirie 1996, Kubicek 2000, Malanchuk 2005, Mykhnenko 2009, Armandon 2013), and with time the population had gradually grown accustomed to living in the sovereign Ukrainian state (Winnerstig et al. 2014). By 2013, a majority among the younger cohorts living in the Donbas (and in Crimea!) supported the idea of EU membership (Armandon 2013). With this in mind, the current tragedy would have seemed unthinkable just one year ago, and the current notion of an “overwhelming support” for the separatist cause, as indeed much of the real support in itself, is a cynical creation of the ruthless Muscovite war of disinformation.

Nevertheless, the fact that there is considerable support for the “people’s republics” among many groups calls for some deeper reflection as to its underlying causes. What complicates the matter is that the Donbas hosts a significant population that carries a “cosmopolitan” Soviet identity (Pirie 1996, Kubicek 2000) that we can now retrospectively identify as the region’s, and perhaps even the entire country’s, most insidious Trojan horse.

Thus, rather than being divided between Ukrainians and Russians, the Donbas is divided between people who believe in the concept of Ukrainian sovereign statehood and those who are nostalgic of the Soviet past, i.e., it is a profound ideological divide, but not one that runs along ethnic, political or religious lines.

That Soviet identity remains particularly strong in the Donbas is not by chance, as the region occupied a special role in the historiography of the making of the Soviet Empire – a telling V.I. Lenin quote that accompanies the largest statue of the Soviet leader in Donetsk says it all: “The Donbas is not just any region; it is a region without which the construction of socialism would remain simple wishful thinking ”. The way the local authorities have tried to accommodate the mutually exclusive Ukrainian and Soviet identities rests on a somewhat odd compromise that petrifies and possibly exacerbates their parallel existence. For example, the main train station in Alchevsk, a mid-sized industrial city that is currently occupied by the “Lugansk People’s Republic”, bears the city’s pre-1992 name of Komunars’k. Not Kommunarsk, as it would spell in Russian, but Komunars’k, in Ukrainian (Figure 1). 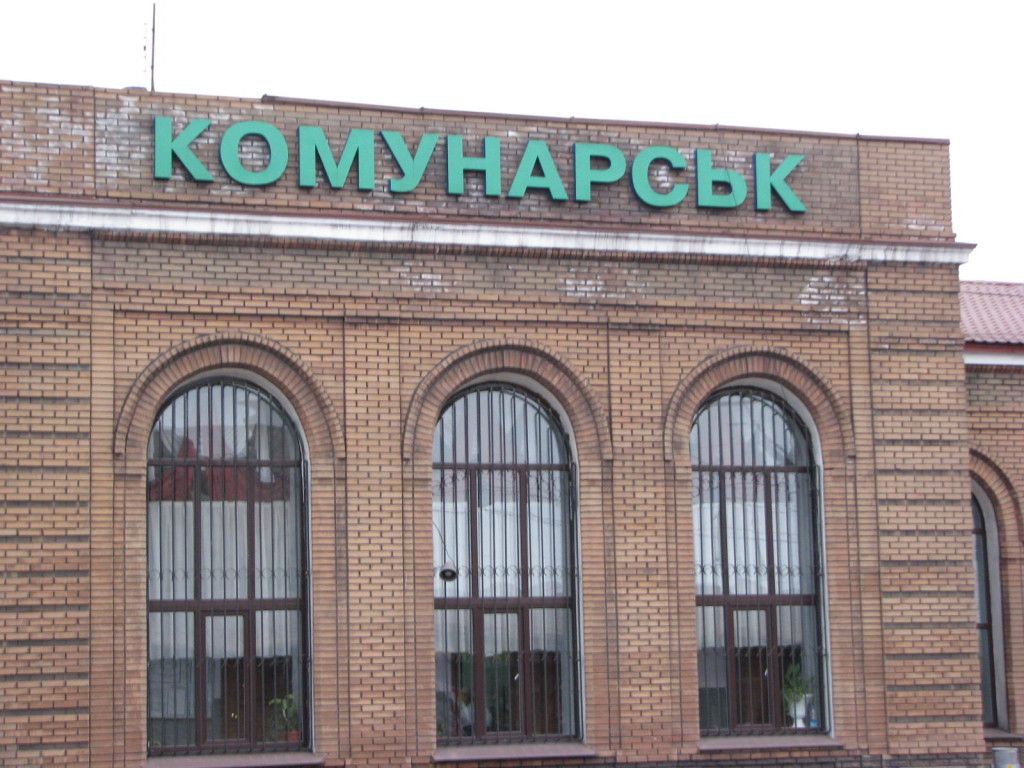 Such a hesitant strategy does not promise much success: as suggested by Anders Åslund (2002) and others, following the demise of the socialist system, the transition countries required radical and fast economic and institutional reforms as opposed to the gradual “soft” strategy advocated by others. The speed and depth of change was expected to influence the credibility of the overall architecture of reform. Unfortunately, gradualist Ukraine was not one of Åslund’s best students, and the lagging pace of economic reform did little to facilitate the country’s effort and urgent need to come to terms with its Soviet near past, walling it instead into the present. As a result, most Ukrainian cities, and most notably those located in the Donbas, continued to be occupied by anachronistic mindsets and stone-carved assassins. For example, the equestrian statue of Luhansk’s most notorious Bolshevik, Kliment Voroshilov – the man who sealed the fate of thousands of victims of Stalin’s purges and of the Polish officers murdered in Katyn – still stands in its place, idolized by the local populace and free from any threat. This Soviet psychological and semiotic occupation of the Donbas is integrally related with its current military occupation, and it is an important influence on the local population’s geopolitical conceptions, preferences and sense of belonging – on its geopolitical identities. The fact that the separatists claim to represent “people’s republics”, that they have installed “people’s courts”, and that they are defended by a “people’s militia”, underscores this point.

If part of the blame for Divided Ukraine can be put on the lack of political will and courage among past policy-makers to shed off the Soviet Union, understanding who it is that is most affected by it is of paramount importance for the success of future reconciliation policies in the Donbas. Based on a detailed survey conducted in Luhansk in late 2013 – just before Yanukovych changed his mind about the EU Association Agreement – my own research (Gentile 2015) investigated the population characteristics that were most associated with pro-West sentiment measured using attitudes toward the idea of Ukraine joining the EU and/or NATO. The results may be assessed against the findings of a similar extensive survey conducted in the nearby city of Stakhanov in 2009. The general picture in both surveys indicated that EU support hovered around 15 percent, while support for NATO alone was close to zero (but 2 and 4.5 percent, respectively, in combination with the EU). However, compared to Stakhanov in 2009, the 2013 Luhansk survey noted a substantial increase in “don’t know” answers (14 vs 36 percent), and accordingly the openly anti-West position was only supported by a relative majority of just over 43 – not 96 – percent in Luhansk on the eve of the Maidan (and this does not necessarily imply support for the separatists). There were only small differences between Ukrainians and Russians, whereas the small Crimean Tatar community emerged as distinctly pro-West.

Who were the 21 percent who actually supported EU and/or NATO accession in this bastion of separatist resistance against the “Kiev junta”? The results of a multivariate logistic regression model comparing this group to the pro-Russian reference group indicate that this constituency was younger, male, better-educated, not Russian, more tolerant toward sexual minorities, more satisfied with life, and somewhat more fluent in English. Reflecting this, anti-Western sentiment was most common among older, Russian, low-educated, homophobic, and resentful non-English speakers.

However, among these effects, education and tolerance toward sexual minorities were clearly the most important predictors of EU/NATO support. The effects of age and ethnicity were only moderate, confirming earlier suggestions that social class – not ethnicity or spoken language – is the principal determinant of geopolitical identity in the Donbas. This is good news for Ukraine, for it means that a well-conceived and fair reform process may trump separatist revanchist ethno-particularism, which makes little sense in a region where ethnicity has a shallow and poorly defined meaning. Therefore, the success of the forthcoming reconciliation effort will need to rely on the state’s ability to “sell in” a set of universally positive values and norms, and the state institutions and their representatives have to set the example first. However, to do so will also require the rapid and irrevocable demise of the vestiges of the Soviet Union. Voroshilov needs to be toppled from his horse, and even though there have been better windows of opportunity to do so during the country’s recent history, the job has to be done once and for all. The liberated cities of Lysychansk, Kramatorsk and Slovyansk are good places to start with.

2 The survey was conducted in cooperation with the Luhansk Oblast Statistical Authority (n=4,000, based on face-to-face interviews). For more information see Gentile (2015).

3 To the best of this contributor’s knowledge, the Stakhanov and Luhansk surveys are the most extensive representative sample surveys that exist in relation to specific cities of the Donbas.

4 Multivariate regression models allow the identification of the impact of each included variable when all other variables are held constant (i.e., “controlled for”).

5 This indicator is expected to indirectly measure the influence of the Russian media.

Armandon, E. (2013), Popular assessments of Ukraine’s relations with Russia and the European Union under Yanukovych, Demokratizatsiya: The Journal of Post-Soviet Democratization 21 (2): 289-308.