On May 7, 2015 there was a general parliamentary election in the UK. Before the election, VoxUkraine has asked the UK Parliament candidates three questions about their views on the Budapest memorandum and territorial integrity of Ukraine, economic and military support to Ukraine, and whether the actions of Russia pose a national security threat to the UK. Here is the detailed analysis of the answers.

Overall, 3,601 candidates out of all 650 UK constituencies were approached by email, and 109 answers have been received (response rate 3.0%). The exact questions were as follows:

Question 1: In 1994 the UK was one of four countries that signed the Budapest Memorandum, which guaranteed Ukraine’s territorial integrity and sovereignty. Ukraine  fulfilled its promise and gave up its nuclear weapons. One year ago Russia annexed Crimea. Russia has sponsored war and terrorism  in Eastern Ukraine. Nine British citizens were aboard flight MH17 shot down with Russian missiles. If you become a Member of Parliament, would you support full restoration of Ukraine’s territorial integrity?

Question 2: To solve the crisis in Eastern Ukraine, Ukraine needs to strengthen both its economic and its military power, and pressure on Russia needs to be applied.

Question 3: Mr Litvinenko, a British citizen, died in November 2006 after being poisoned with the radioactive substance polonium-210 within 20 minutes walk distance from Buckingham Palace, London. British authorities submitted a formal request for the extradition of two suspects. Both were Russian citizens, but Russia declined to cooperate. Over the last year a number of incidents involving Russian bombers and submarines have been reported around the UK borders. Do you believe that Russian actions should be considered as a threat to the UK security? 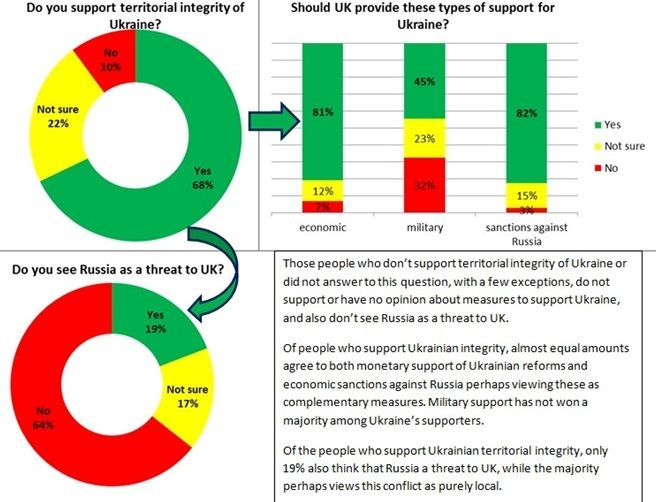 Next we turn to specific questions – the answer to each question has been decoded to the following values: “1” – Agree, “-1” – Disagree, “0” – No clear opinion. Figure 2 reports the ‘average’ answer on specific questions. If there are as many candidates in favor as there are against, this average will be zero. If this average is positive, there are more candidates in favor than there are against. If negative, more candidates are against than in favor.  Figure 2 shows that more people agree that Ukraine’s territorial integrity should be restored than disagree with this statement. Furthermore, economic help to Ukraine and sanctions against Russia have more supporters than opponents. However, the majority of potential MPs opposed providing military assistance to Ukraine. 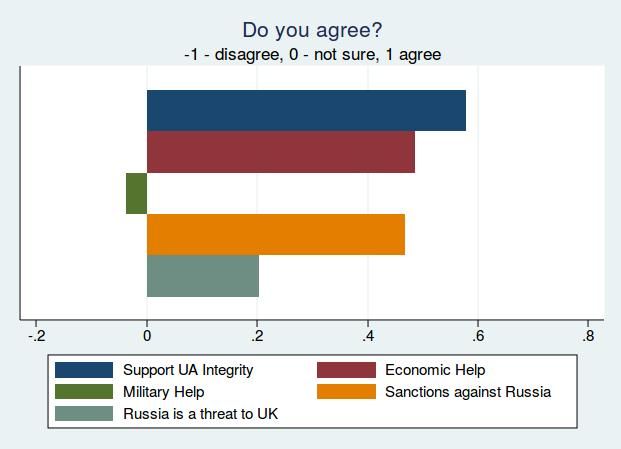 Table 1 reports correlations across answers. These correlations help to understand which questions are answered most often in the same way.  The highest correlation (63%) is between answers to question “Do you support territorial integrity of Ukraine?” and  “Do you support sanctions against Russia?”. So people who answered ‘agree (disagree)’ to one of these questions are likely to ‘agree (disagree)’ on the other question as well.  The lowest correlation is between the questions of economic help and of whether one sees Russia as a threat to Ukraine. So for these questions, it happens more often that a person agrees with one of them but disagrees with the other. 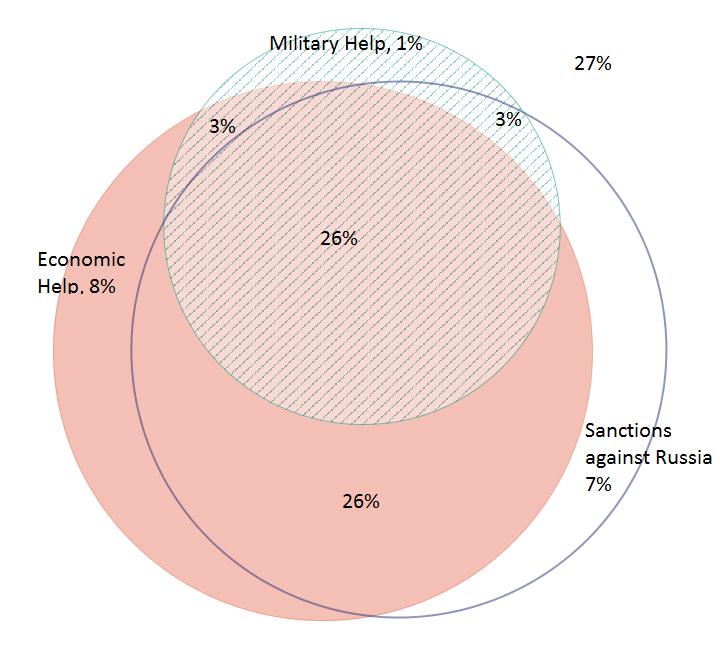 Figure 3 illustrates these correlations in an easy-to-see way: it shows that 52% of people who support providing economic help to Ukraine at the same time support economic sanctions against Russia. 26% of candidates support all three types of help to Ukraine (military, economic and sanctions against Russia). However, it is clear that military support is favored by the lowest number of candidates.

We extend our analysis by exploring a network of candidates, based on answer patterns. The main idea behind this technique is to reveal patterns of interconnections among a set of candidates. 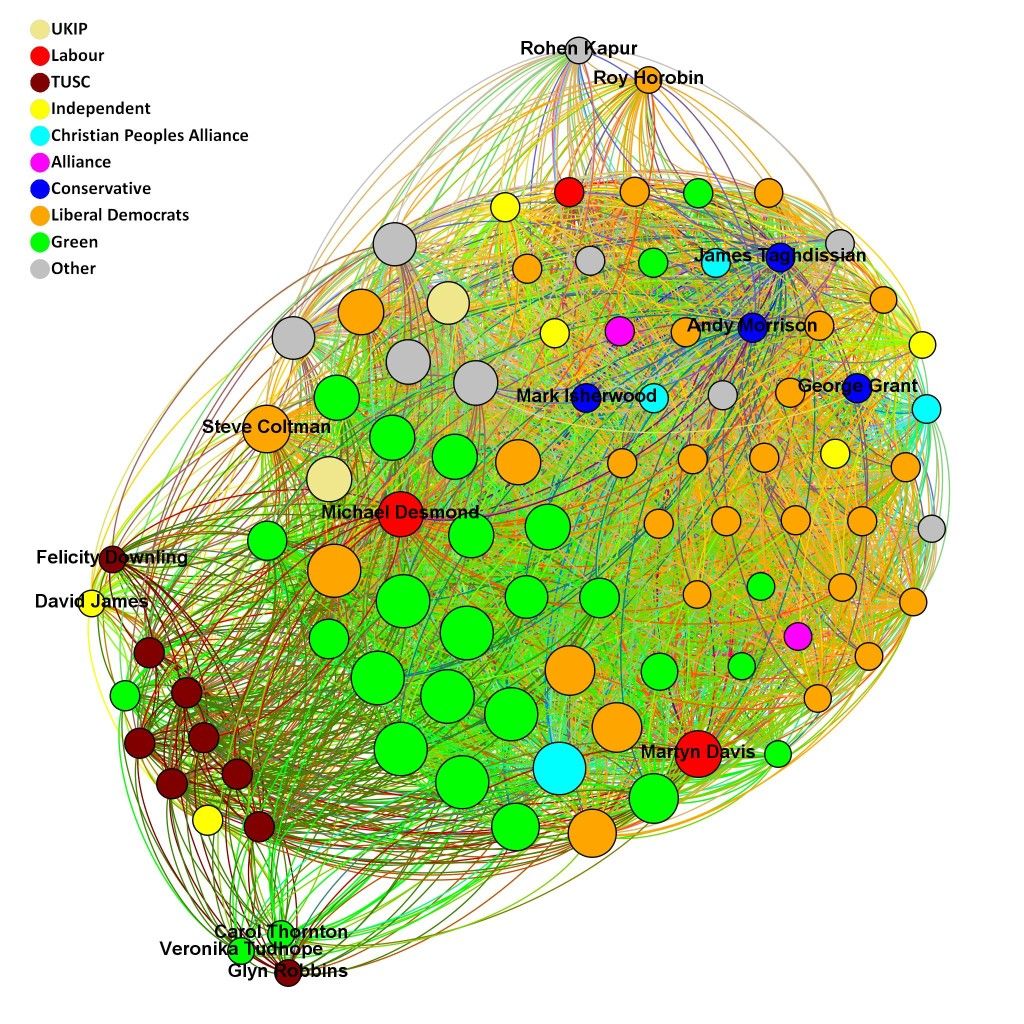 Two of the candidates who responded to our questionnaire got elected to the Parliament. Since we do not know the opinion of other elected MPs, we cannot say that their answers are representative but nevertheless they are worth citing to show that even politicians generally supportive for Ukraine are not ready for a hard stand against Russia.

“Yes, I would support [Ukraine’s territorial integrity] in principle, but I cannot conceive of any circumstances for the foreseeable future whereby Russia could be forced or persuaded to return Crimea to Ukraine.

But I am surprised that you don’t ask about the only thing that will really work, which is a properly integrated EU Energy Union. I also believe that we need to improve our understanding of Russian culture, history and outlook. We need to demonstrate that we are listening more to Russia’s side of the story. A statement making it clear that we do not envisage any expansion of NATO for the foreseeable future would be helpful.

Yes. I lived and worked in St Petersburg for three years, from 2005 to 2008, which enabled me to observe Russia’s slide towards autocracy at first hand. An autocracy with nuclear weapons on the borders of the EU must of course been seen as a threat to our national security. However, please see my comments above about the urgent need for us to engage more constructively with Russia, and also the need for us to make it clear that we do not see Ukrainian membership of NATO as being feasible or desirable for the foreseeable future.”

Paul Maskey, representing Sinn Fein was elected in Belfast West with 54.2% of votes. His opinion is slightly less supportive:

“The Ukrainian people have suffered under corrupt and ineffective governments for too long. The result has been deterioration in socio-economic conditions and the effective bankruptcy of the state.

In my opinion the recent problems in Ukraine stem from the EU/US and Russia playing a zero-sum geo-political game with Ukraine. Ukraine basically got offered to throw all its eggs in the EU basket, on the off chance, that down the line, they might possibly, in a few years, get EU membership. Or to throw all its eggs in Russia’s basket and continue to be under its thumb while surrounded by countries who have went the EU route.

Meanwhile the country was completely bankrupt, socio-economically regressing and rife with corruption.

Rather than trying to railroad the Ukraine down one particular political route, the EU and Russia should have been working together to create mutually beneficial and non-exclusive economic, political and social relationships with Ukraine. This is what would have been of real and genuine benefit to ordinary Ukrainians.

All efforts need to be placed into de-escalating the crisis and allowing the people of Ukraine to discuss and seek agreement on its future. The more Ukraine improves it socio-economic development, the less likely it will be that the country can be used as a geo-political football, like it has been for so long.

This should be the focus of all efforts and support”

Furthermore,  Fabian Hamilton, mentioned in the earlier post of Voxukraine, won in Leeds North East (47.9%). We hope that his position will remain unchanged.

In conclusion, we observe that most candidates in the UK do not care enough about the situation Ukraine to answer questions about it – most of those who did answer did not get elected but were typically quite supportive of Ukraine’s cause. Those who answered are often in favor of restoring Ukraine’s territorial integrity but there is less consensus on how to do this – economic support to Ukraine and economic sanctions against Russia receive quite some support, but military assistance to Ukraine remains controversial. All this suggests that if Ukraine really wants to get support from the UK, it will have to work harder to inform the UK MPs of the importance of what is happening in the East of Ukraine, both for Ukraine and for the UK.