Ukrainian Reforms on Quarantine: the Pace of Reforms Becomes Quite Slow | VoxUkraine

Ukrainian Reforms on Quarantine: the Pace of Reforms Becomes Quite Slow

Extra-ordinary conditions caused by the corona crisis and quarantine have redirected government efforts from longer-term issues (reforms) to urgent problems.

Reforms considerably slowed down at the end of February, and only a few incremental changes were noted in March. Procurement, licensing, and education moved forward the most.

During the 1st quarter, our bi-weekly index for monitoring of reforms fluctuated between +0.04 and +1.1 points, with an average grade of +0.45. Among numerous legislative acts adopted over the period, VoxUkraine selected 32 that had reform components – twice less than in the previous quarter. Experts evaluated them with an average score of +1.0 point. These legislative acts mostly affected Public Finance and Business Environment. No anti-reforms were observed during the first quarter 2020.

The majority of reforms were adopted by the Cabinet of Ministers of Ukraine – 18 regulations. The Verkhovna Rada initiated ten reforms; three reforms were initiated by the National Bank of Ukraine, 1 – by Ukrainian President Volodymyr Zelenskyy. This breakdown is tentative, as President Zelensky has an outright majority in the Parliament and majority government.

The most significant progress was observed in Public Finance&Social Security. For the first three months of 2020, there were ten reformist changes in this sphere. They mostly affect public procurement, education, and labour legislation.

The following ten measures introduced in 1Q20 will improve the Business Environment. They concern such sectors as telecom and internet communications, customs clearance, and land ownership.

In the Monetary System, the National bank of Ukraine initiated two reforms aimed at improving the experience of users of banking services.

To sum up, a few important reforms were introduced in the first quarter of 2020. With the replacement of the government on March 4th and then with the introduction of the quarantine, the pace of reforms considerably slowed down. Still, it would be important for the government to reinforce reform efforts, in particular, in business deregulation, as this will help to partially offset the negative impact of corona crisis cost on companies. 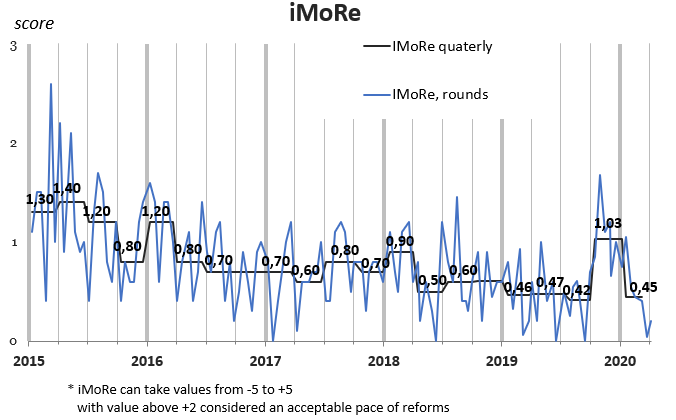