What is the Optimal Currency Composition of Sovereign Debt for Ukraine? | VoxUkraine

What is the Optimal Currency Composition of Sovereign Debt for Ukraine?

Before 2018 Ukraine used to borrow more in the foreign currency. However, in 2019 the situation changed in the opposite direction: today more than a half of debt is issued in the national currency. My analysis shows that when the country is in a recession, it is optimal to borrow more in the national currency, if such an opportunity exists. However, when the economy is booming, it is optimal to sell Eurobonds and accumulate sovereign reserves.

Before 2019, the Ukrainian government used to borrow most of its debt in foreign currencies (mainly dollars or euros). For example, according to the medium – term strategy of sovereign debt management for 2019 – 2020, in 2018 67% of Ukraine’s sovereign debt was denominated in dollars, euro and other foreign currencies, and only 33% – in hryvnia (figure 1). By instruments, 33% of the national stock of debt was in the form of Eurobonds and 25% – in the form of loans denominated in foreign currencies from foreign governments and international financial organizations like the IMF.

Figure 1. Shares of currencies in the denomination of the sovereign debt as of 31.12.2018 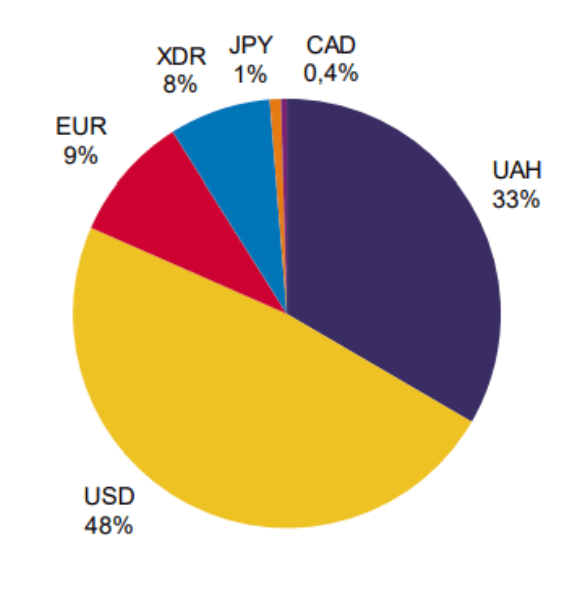 Figure 2 provides a benchmark for this debt structure. Compared to similar countries, Ukraine in 2018 accumulated relatively less debt in the form of government bonds held by domestic and international investors, and relatively more debt in the form of loans from the IMF and other financial institutions, domestic government bonds issued to capitalize state-owned firms, and other loans. 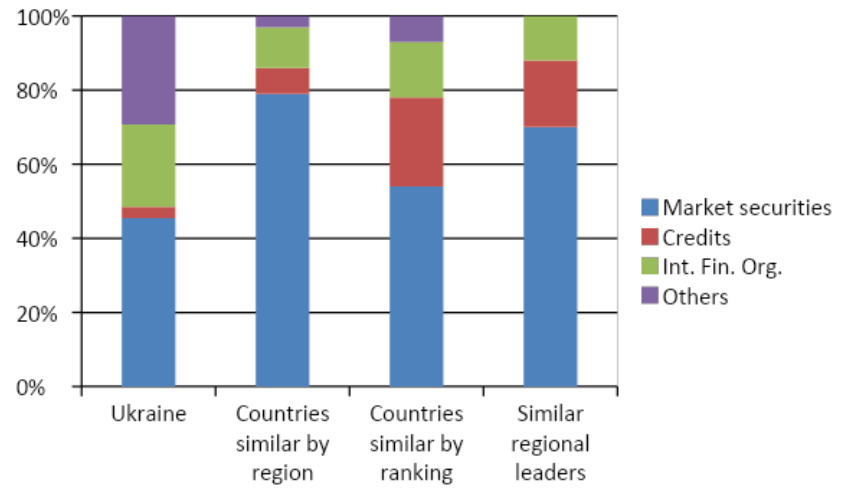 In 2019 the government started issuing more debt in the national currency. According to the ICU, an investment company, during the first three quarters of 2019 the share of national currency in the total stock of debt increased by seven percentage points: from 29% to 36%. ICU analysts state that the main reason for this trend was the depreciation of hryvnia in 2014, which resulted in almost doubling of the debt-to-GDP ratio: from 39.9% in 2013 to 69.4% in 2014 and 79% in 2015. Expenses on sovereign debt servicing also increased: the share of state budget revenues spent on debt financing was less than 7.5% in 2012 whereas in 2015 it reached 16%. Thus, the government considered increasing the share of debt denominated in the national currency to be economically optimal, as it would allow to reduce the risks of default and costs of debt servicing.

To account for the three above-mentioned facts, the authors develop a theoretical model calibrated for “two economies”: one, in which the government can choose only debt, and another one where the government can choose both debt and inflation. In the first model, the authors highlight the ability of the national currency debt to hedge against negative income shocks: when GDP falls, the exchange rate depreciates, which devalues debt denominated in the national currency and reduces debt burden.

The model accounts for the second and third facts as well. An increase in the share of debt in the national currency in the observed small open economies is linked to positive GDP shocks and increased costs of inflation. The result is consistent with the famous work by Eichengreen and others (2002) introducing the concept of the “original sin”, under which many small open economies cannot denominate debt in their national currencies when selling it in international financial markets, which increases their volatility and makes them more prone to crises.

Experience of other emerging market economies 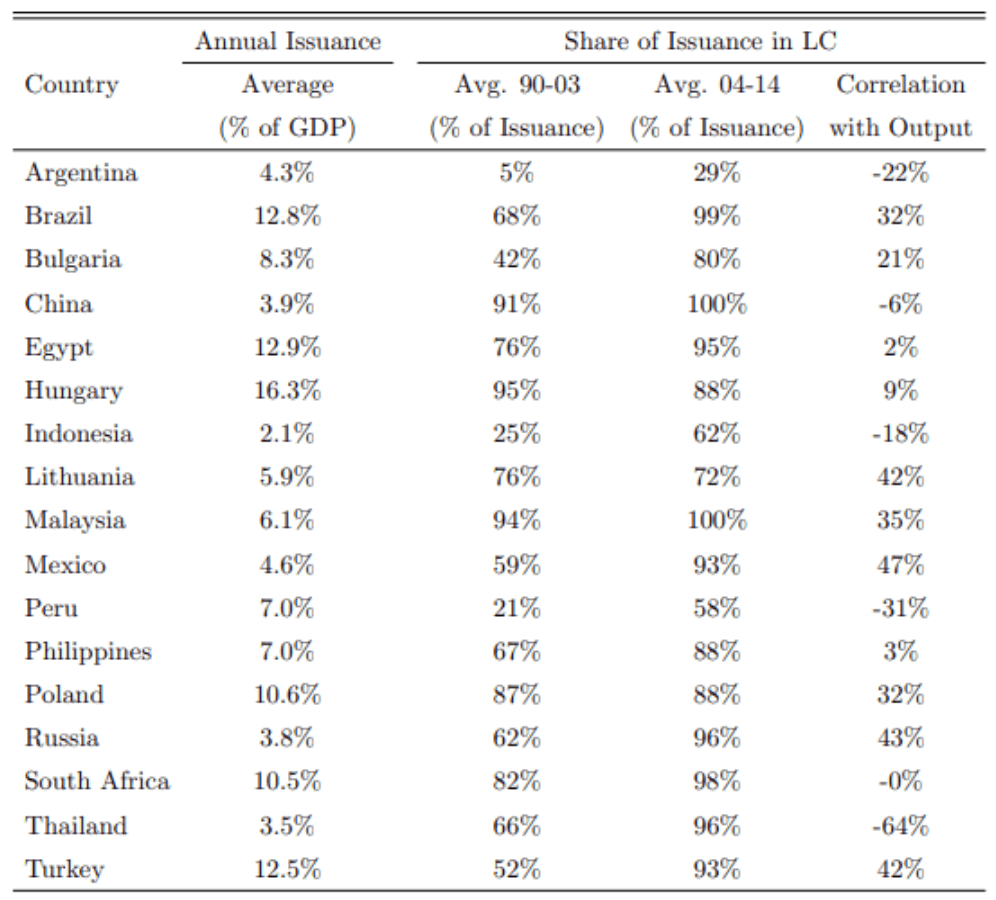 Table 1 shows that between 1990 and 2003 the majority of emerging market economies used to denominate newly issued debt mostly in the national currency (column 2). The exceptions are Argentina, Bulgaria, Indonesia, and Peru. In Argentina, a high share of debt denominated in foreign currency became the major reason for the country’s default in 2001. In 2004 – 2014 the shares of debt denominated in the local currency further increased in almost all the emerging market economies presented in the table (column 3). One of the most important reasons is the financial crisis of 2008 and the potential willingness of global investors to take more risk and buy national-currency bonds of small open economies that brought much higher yields than bonds of developed countries. Another reason is an increase in the level of GDP and costs of inflation in respective countries (Ottonello and Perez , 2019).

Results of the theoretical model and policy advice for Ukraine

I developed a theoretical model based on Ottonello and Perez (2019) and Arellano and others (2019). Similar to Arellano and others (2019) the opportunity of partial default on debt denominated in the foreign currency is introduced. Therefore, I allow for the trade-off between the risk of default if debt is denominated in the foreign currency and the risk of inflation if it is denominated in the national currency. In addition, as in Ottonello and Perez (2019), the model economy consists of two sectors producing tradable and non-tradable goods. Since Ukraine is highly dependent on commodities, shocks in this sector substantially impact the economic outcomes in the country. I calibrated the model for Ukraine using the annual data on consumption, GDP, risk premiums, stock of debt, and debt-to-GDP ratio for 2010 through 2019. The main results are as follows.

Today Ukraine is going through another major recession. My theoretical analysis suggests that the Ukrainian government should continue its strategy to issue debt in hryvnia. This policy will help the government to minimize the risk of default and real debt burden incurred by the Ukrainian taxpayers.

A potential drawback of my model is the absence of assumption about the inflation targeting by the Central Bank. In the modern environment of inflation targeting, the government is constrained in his effort to inflate away the debt by causing an unanticipated inflation. Inflation targeting implies that the central bank will raise the interest rate in response to rising prices, which will increase the cost of debt servicing. Another aspect for which the model does not account is the loss of investor confidence: if the government significantly inflates its national currency debt away at present, it may be unable to attract loans or to sell bonds denominated in the national currency in the future. Or it may have to pay much higher interest rates for these loans or bonds.

Another important assumption which is not covered by the model is the opportunity for the government to collect taxes. Taxation is an alternative source of state budget financing. Although raising taxes or imposing additional taxes is unpopular, governments may try to do this instead of borrowing.

Eichengreen, Barry, R. Hausmann, and U. Panizza. 2002.  Original sin: the pain, the mystery, and the road to redemption. IADB Conference ‘Currency and Maturity Match-making: Redeeming debt from Original Sin.’