What is Wrong with Port Tariffs in Ukraine and How to Make them Competitive? | VoxUkraine

What is Wrong with Port Tariffs in Ukraine and How to Make them Competitive?

Ukraine’s logistics is by far more expensive by international standards. The World Bank 2016 Logistics Performance Index (LPI)[1] ranks Ukraine 80th among 160 countries, down from 61th place in 2014. Its LPI score is almost 55% lower than the value of the top performer, Germany (2.74 vs. 4.23).

Ukraine’s competitors in agriculture also outperform, USA and Argentina’s LPI scores are 3.99 and 2.96, correspondingly. {x} Poland, Ukraine’s neighbor and 33d in the LPI ranking, outperforms Ukraine in all components of the LPI. Port infrastructure, which is a part of logistics infrastructure and a focus of our paper, also performs quite badly on international rankings.  Per the World Economic Forum Quality of Port Infrastructure measure[2], Ukraine’s score was only 3.2 out of 7 in 2016, down from 4 in 2012. In other words, business executives’ perception of Ukraine’s port facilities is more than moderate and it’s deteriorating. Ukraine’s competitors’ scores in this ranking are much higher (see Figure 1).

The above facts about Ukraine’s performance in various logistics infrastructure related rankings corroborates well with a finding of the recent study of the World Bank (2015). Among other things it shows that the costs of moving grain from Ukrainian farms to the Black Sea ports are approximately 40% higher than costs for comparable logistics in France and Germany, and 30% higher than costs in the United States. As a result, agricultural producers in Ukraine receive lower shares of world market prices and thus forgone revenues due to inefficient logistics in the country. According to the same World Bank (2015) study, if Ukrainian agricultural producers could get the same farm gate price as their US colleagues, they would earn additional US$ 1.6 billion per year for wheat and maize alone. Other exporting sectors (iron ore, metallurgy) face similar losses (see in the paper below). As far as imports is concerned, inefficient logistics makes consumers pay higher prices and thus decrease their purchasing power.

Figure 1 The Quality of Port Infrastructure scores for selected countries, 2016 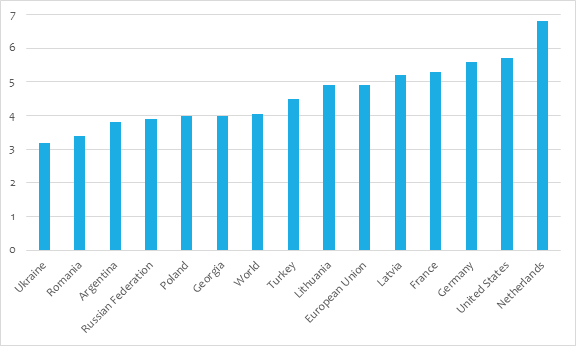 Port costs seem to be especially high in Ukraine compared to its competitors. As Figure 2 shows, grain traders, for example, incur significantly higher costs at ports (black chunk of bars) compared to their competitors in the EU and US, i.e. their costs are higher almost by a factor of 3. Below we show the main contributors to the high  port costs and focus in the following on one area where the Government has control over the pricing and could get rather quick reductions.

Port costs in general one can divide into those related to handling the cargo and those related to serving the vessels at port. Cargo handling costs cover the costs of terminal load/discharge operations, storing, vessel load/discharge operations, certification and forwarding fee etc. Vessel servicing costs are related to a call and stay of a vessel in the port of loading, agent fees and any additional expenditures that are negotiated in a charter (number of ports of loading, number of loading berths, additional expenses connected with shifting the vessel, etc.). These costs are contained in so-called vessels disbursement account and port charges make up a considerable share in it.  Figure 3 demonstrates some examples of a breakdown of total port costs into cargo and vessels expenditures for key export products of Ukraine (see Figure 4). Of course, all these expenditures vary from port to port and depend on vessels’ tonnage capacity, but it would be relatively safe to assume that port charges make up on average 20 to 50 % of the total port costs for key Ukraine’s commodities.

Cargo handling expenditures or prices are market based in Ukraine and the government has little leverage to influence them in the short run. The answer to the question why cargo handling expenditures component is more expensive in Ukraine’s ports requires additional analysis and it is out of the scope of this paper, it is a question of competition between port terminals, their handling capacities, access of third parties, etc. But the general trend in cargo handling expenditures is downwards. Grain port terminal capacities increased from 32 million tons to nearly 52 mln tons over the last 5 years and cargo handling prices decreased from USD17-18/t two years ago to USD11-13/t today.  Port charges, on the contrary to cargo handling prices, are established and regulated by the government, i.e. by the Ministry of Infrastructure of Ukraine/Ukrainian Sea Port Administration and this is where the government can decrease the export/import logistics costs via decreasing its port charges.

In the following we will take a closer look at the sea port pricing practices in Ukraine and how does it compare to the best international practices. We also demonstrate to what extend port tariffs could be reduced in Ukraine. 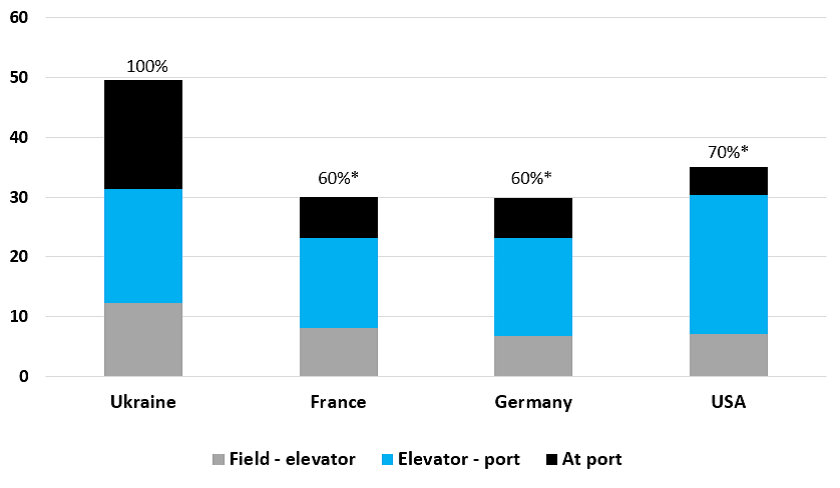 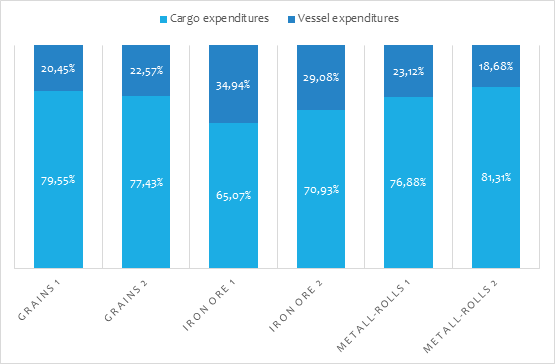 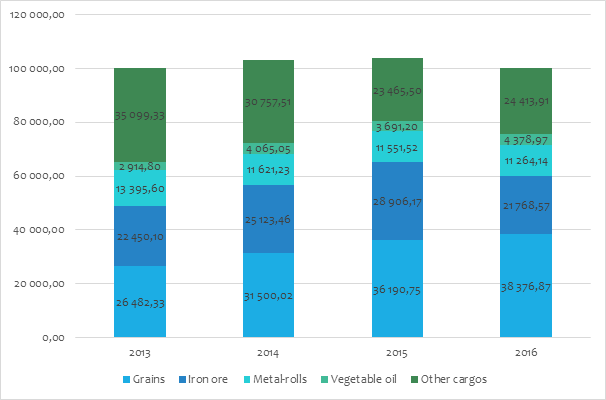 1.1.  Ukraine has too many port tariffs

The Ukrainian ports collect income from at least fourteen to up to twenty tariffs[3]. They consist of:

Figure 5 Example of Payments by a Panamax Dry Bulk Carrier at Ukraine’s Ports, in US$ 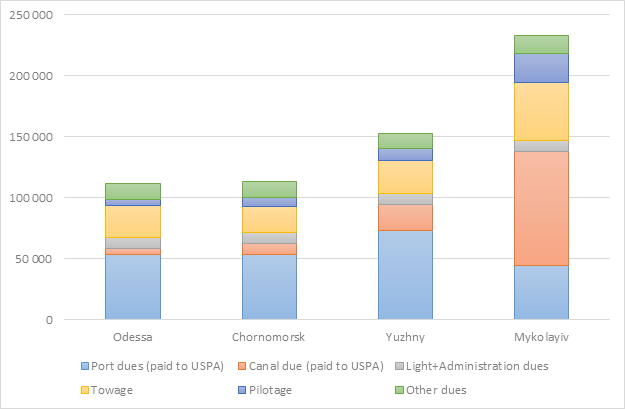 Source: Own presentation using shipping agent data. The figures are based on a call by a Panamax vessel of about 65,000 DWT and 45,000 GT.

The structure of the main tariffs is only partly consistent with that elsewhere in the world, where charges have generally developed along similar lines.  In particular, tonnage dues, towage, pilotage and sanitary dues are standard charges. But, canal/channel dues are less common in other countries, while seven others –  administration, VTMS, boatmen dues, harbor master fees, port information fee, watch keeping service, sealing of output valves – are unusual. Two largest European ports – Rotterdam and Antwerp – have only three significant charges in their tariff schedules collected by Port Authority, while towage and pilotage dues are paid to private companies.  The trend in advanced economies is towards fewer and simpler tariffs.

1.1. The levels of Ukrainian port tariffs are well above those at comparable ports elsewhere

Source: based on calls by a 95,000 GRT container vessel at eight ports in the region

Smaller bulk carriers, however, do not always have to pay much more in Ukrainian ports than at other top ports in the world (see Figure 6), two of the Ukrainian ports (Nibulon and Mykolaiv) are about four times as expensive as the European ports. But Odessa, for example, is only about 45% more expensive.  The reason is that well over half of the Nibulon and Mykolaiv costs consist of channel dues and tug charges, which are high because the ports are located at the end of long canals (see Figure 5). 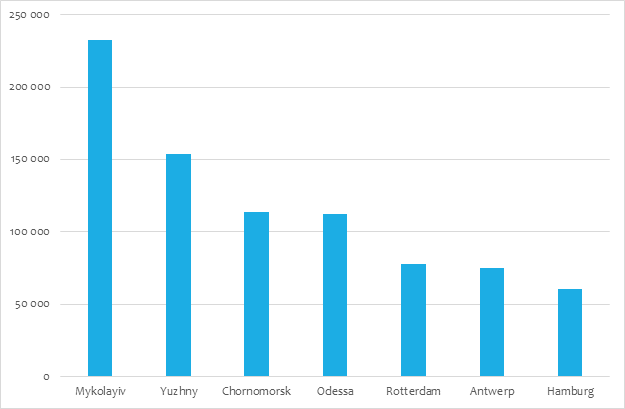 How to Reform Sea Port Tariffs in Ukraine

The discussion in the above sections makes a strong case for revising the sea port tariffs in Ukraine and making them competitive with the ports elsewhere in the region and in competing destinations.

To conclude, the average cost-based approach is the most widely used approach to port pricing and that Ukraine should adopt it as the dominant model in revising its port tariffs. This basic approach, however, should be complemented by demand-based refinements, considered on a case by case basis, after reviewing competition from other ports and the scope for winning national, transshipment and transit traffic.  The analysis should be carried out in conjunction with terminal and inland transport operators, both of whose costs are greater than those of the port authority.

The best starting point for understanding why Ukrainian port tariffs are high is the Financial Statements of the Ukrainian Sea Port authority (USPA), which shows revenues from sales in 2016 at UAH 7.3 billion compared with reported costs of only UAH 2.6 billion (see Table 3), i.e. the revenues exceed the costs by a factor of 2.8. Very similar picture is observed in previous years, so it could therefore be inferred prima facie that tariffs could be cut by at least 2 times and still cover costs.

Source: Own presentation using USPA data; * not for the full year, because USPA was established in the middle of 2013, therefore financials for 2013 look unusual compared to other years

More detailed look at revenues and costs associated with port tariffs confirms that there is a significant scope of reduction of port tariffs. Table 3 shows that if all costs (opex and capex) are included, then the tariffs could be cut also by at least a factor of two. If inly OPEX is accounted for, one reach more significant reductions, i.e. by more than 3 times. If only 50% of CAPEX is to be recovered from port dues, port tariffs could be also then cut by more  3 times.

Table 4 shows a scope for tariffs reduction for each individual port tariffs, considering the revenues they generate and how much costs are associated with each of the tariffs. Resulting ratios are indeed impressing. For example, the revenues exceeded the corresponding costs for the anchorage due by more than 9 times in 2015.

It worth also mentioning, that little of the USPA’s large mark-up over costs is retained for port investment (CAPEX).  Most of it goes to the state budget in the form of corporate tax and dividends[5], USPA is always on top of list taxpayers of Ukraine.  As in many countries that have port revenues charged in dollars the port authority is treated as a cash cow by the Government.

Source: Own presentation using USPA data; berth due does not include a special berth service fee that is been charged by USPA separate from much smaller berth dues

The scope for tariff reductions could be even higher if:

Recommendations for building a sound foundation for rational tariffs based on modern port operations with reasonable costs in the short, medium and long terms are outlined below:

[1] LPI is a perception survey and as such it demonstrates how private sector logistics professionals views logistics services in countries they operate.

[3] Some shipping lines report paying even more tariffs, up to twenty, see users views on number of tariff later in this Chapter.

[5] Since 2015 75% of USPA’s profits is transferred to the state budget, this applies to all state enterprises in Ukraine

[6] Calculated in cubic metres from the sum of three values (vessel length, vessel beam and vessel freeboard) shown in the certificate of tonnage (principal dimensions) or in the document that substitutes for it.

[7] The GT of a ship, which is available in the vessel’s documents, is calculated on the basis of “the moulded volume of all enclosed spaces of the ship”, by measuring the total capacity in volumetric tons of 100 cubic feet, adding the underdeck tonnage and the internal volume of tween-decks and deck space used for cargo. The formula to be used is defined in Regulation 3 of Annex 1 of The International Convention on Tonnage Measurement of Ships, 1969, and serves to determine the ship’s manning obligations, safety requirements and registration cost as well as port dues.