Reporting on reforms in Ukraine that commenced after the Euromaidan Revolution has often been rather negative, with successes observed during the first years after the revolution being rolled back and stagnating. Many people say that the fight against corruption is a second frontline for the country, which to some extent is true. However, Ukraine’s successes in the anti-corruption direction are often underestimated.

Full version of the article is available at Euromaidan Press.

Significant processes whose results are already visible or will be in the future have been launched. In particular, Ukraine has built a chain of anti-corruption bodies that have broken the stalemate on the country’s anti-corruption front.

Euromaidan Press talked to Vadym Valko, Automaidan NGO lawyer and Secretariat of the National Anti-Corruption Bureau’s Public Control Council analyst to evaluate the results of the changes in the anti-corruption direction.

The last of the three had – at least until Autumn 2019 – a very bad reputation, being blamed for inefficiency and political dependence. In Autumn 2019, the new parliament relaunched NAZK, which soon delivered positive results, examples of which are the draft of the new anti-corruption strategy and an improved format of asset declarations for state servants. 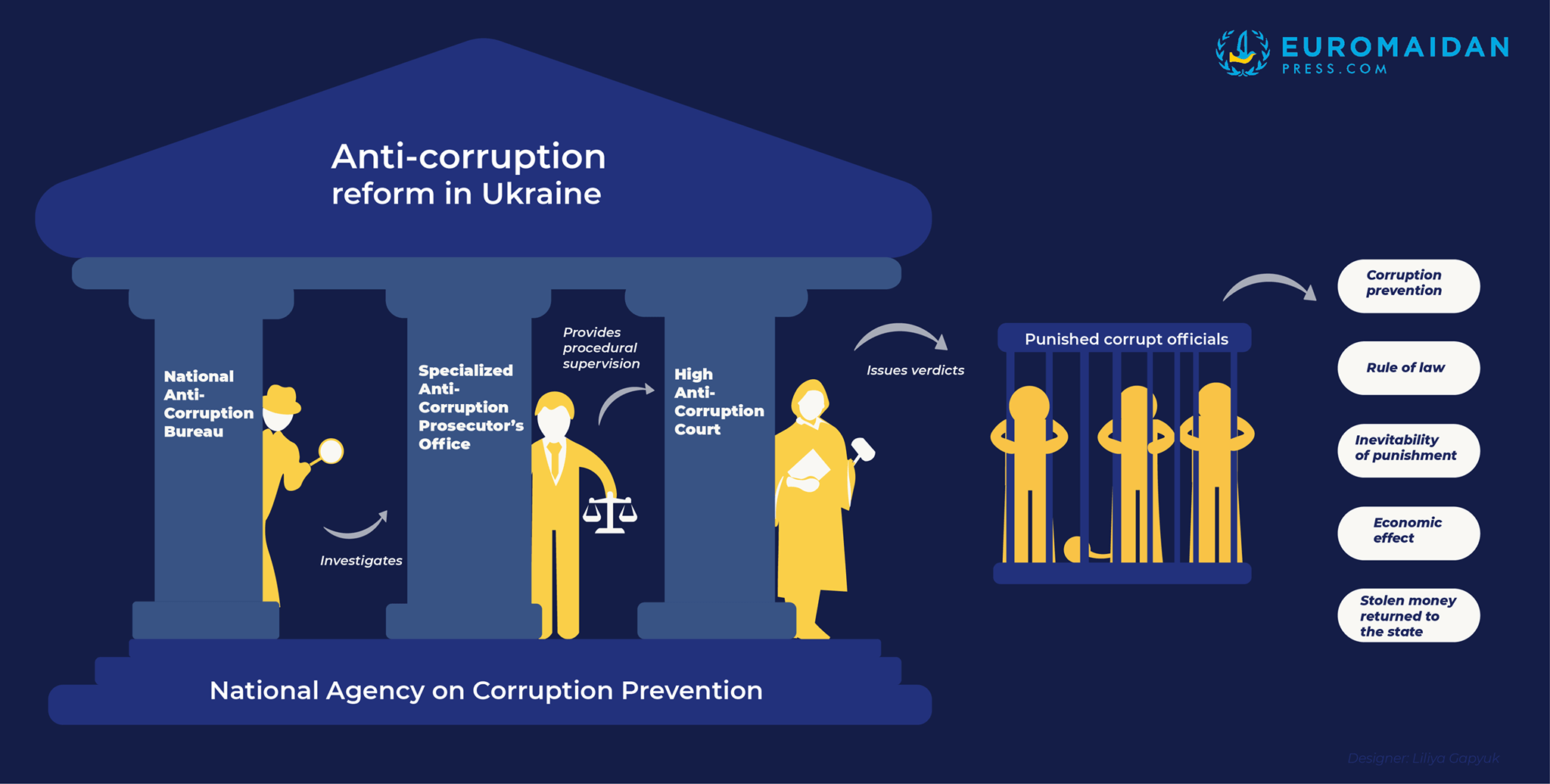 Why is the creation of all of these bodies considered a success?

Before the creation of the Anti-Corruption Court, Ukrainian media tended to discredit the NABU as it was blamed for a lack of prosecuted individuals. In fact, the NABU as an investigative body has never been responsible for punishment. Valko stresses that when the NABU and SAP did not exist Ukraine had never seen such high-profile investigations. Among them are cases against the “grey cardinal” of Ukraine’s political scene Mykola Martynenko, the former head of the State Fiscal Service Roman Nasirov, Odesa mayor Hennadiy Trukhanov, and many others.

However, calculating success is complicated. “If looking at the amount of the stolen funds returned to the budget, it is not much,” Valko says.

Other benefits the NABU delivers:

Firstly, it has a preventive function, as those looking at cases being investigated would think twice about committing such a crime themselves.

Secondly, Valko points to the economic benefit. Corruption schemes investigated by the NABU which siphoned off millions over years have been eliminated.

A particular economic effect results from terminating harmful agreements between state-owned enterprises (SOEs) and private companies.The decisions to terminate these allow SOEs to file independent lawsuits to have the funds returned.

“The NABU terminated agreements to the amount of UAH 8bn ($292m). During five years, about UAH 2.5bn ($91m) was spent by the NABU. If state enterprises were dealing with it [working on extracting the funds], the NABU would be paid off only due to these agreements.”

In general, the NABU’s establishment was a breakthrough in Ukraine’s anti-corruption efforts. NABU showed that no one is immune to investigation.

Institutions are strong despite issues with their directors

Since the beginning of their work, the NABU and SAP have been headed by Artem Sytnyk and Nazar Kholodnytskyi respectively. The procedures of the selection of both differed, but both were public. The NABU head is appointed for seven years, while the head of the SAP for five.

Kholodnytskyi had to leave in November but had announced his resignation at the end of August 2020. Previously, society had lots of questions about his work as there were signs of him sabotaging cases. “Still, Kholodnytskyi himself is not the SAP, the SAP is prosecutors,” Valko says.

The Commission which will select the new head of the SAP includes 11 people. Four of them are nominated by the Prosecutor’s Council (these have already been selected), while seven are appointed by the Parliament. According to Valko, civil society organizations have no issues with the four people selected by prosecutors, while they do have questions to the candidates chosen by the Parliamentary Committee on Law Enforcement. The parliamentary vote on them is expected in September.

The public procedure of selecting the SAP head was a condition for the EU visa-free regime for Ukraine. Non-fulfillment of it might lead to its suspension.

There have been questions about the NABU head Sytnyk as well, and even a minor corruption scandal with his involvement as Sytnyk found himself in the registry of persons having committed corruption or corruption-related offenses. This related to him not having paid UAH 25,000 (about $900) for accommodation during his vacation. The incident sparked attempts by the NABU’s opponents to have him dismissed.

Valko says that the personality of the head itself is not that important as the body will be able to keep the quality of the institution for some time irrespectively of the name of the director.

Moreover, the role of the head of the NABU is overestimated.  “No single case of a NABU detective taking a bribe was identified. I think that all the other law enforcement bodies were chasing the NABU detectives to catch them. But there were no such cases.”

While we were writing this article, Sytnyk’s opponents came closer to unseating him with a decision of the Constitution Court of Ukraine.

The court ruled that the former president Petro Poroshenko’s appointment of Sytnyk after a competition in 2015 was unconstitutional. MPs appealing to the court stated that Poroshenko had gone beyond his purview, as the Constitution does not foresee the president appointing the NABU head.

The Constitution indeed does not foresee such an option, which means that the law on NABU was adopted despite contradicting the Ukraine’s main law. This, according to the constitutional expert and deputy head of the Center for Political-Legal Reform Roman Kuibida, was a “time bomb” which would erupt sooner or later.

However, the Constitutional Court can’t dismiss Sytnyk; rather, the ruling invalidated the decree with which he was appointed. Practically, this means that decisions signed by Sytnyk from now on could be appealed in court, which will probably force him to avoid signing anything. However, NABU will continue operations, with the deputy director assuming Sytnyk’s duties. The situation may be resolved by changing the law on NABU or the Constitution, while the only person who can dismiss Sytnyk is the president, believes Fedir Venislavskyi, the president’s representative to the Constitution Court of Ukraine.

Reacting to the court decision, NABU released its own statement calling the court decision politically motivated and related to NABU’s recent investigation into the work of the Kyiv District Administrative Court, which has exclusive powers to consider cases related to high-level government agencies located in Kyiv. The NABU suspected the judges of this court of creating a criminal organization and aiming to seize state power. The investigation included uncovering political interest in some of the Constitutional Court decisions as well.

Even if Sytnyk is removed, NABU’s institutional capacity will permit continuing to implement its duties on a decent level. However, it is obvious that further offensives on the institution are expected in the future. Therefore, public control over the processes around the NABU becomes crucial.

The High Anti-Corruption Court was created in particular for cases of top-level corruption investigated by the NABU and the SAP. The procedures involved in its creation included the participation of international experts which contributed to its fairness.

After a year of work, the court has taken 14 decisions, 13 of which were convictions. So far there have been no major claims of court judges lacking independence.

Among the challenges the court faces, Valko names the number of judges.

“There are lots of cases, but not that many judges. Out of the 38 judges of the court, there are only 18 who conduct hearings. A number of others are investigative judges, others work in the appeal chamber. The specifics of the cases on top corruption is that there have to be three judges conducting the hearings. 18 judges mean six collegiums. Each collegium considers about 30 cases. There are 22 working days in a month. Two cases can be considered a day. So objectively big cases consisting of 200-250 books each should be considered for about a year and a half.”

Valko estimates that 13 convictions are a decent result for the first year of the court’s work. However, more is expected in the years to come as the establishing work is over.

Valko praises the transparency and communication of the court’s work. However, the lack of unbiased media coverage is another challenge the court faces. For example, the case against the above-mentioned grey cardinal Martynenko accused of causing losses to the state of UAH 700m ($26mn) has been systematically covered in a manipulative way by the two nationwide channels Inter and Ukrayina. In their materials, the two hushed up the details, gave the floor only to the defense, and never described the international component of the investigation. Meanwhile, other media only cover key hearings in high-profile cases.

“I think that the judges are honest. Even though it’s important for them to know that someone is watching them.” –  stresses Valko.

He, as well as other independent judicial experts, thinks that it is crucial to extend the experience of selection of the judges to the anti-corruption court with the participation of international experts to the entire judicial system.

The fight for the Anti-Corruption Court in Ukraine had been tough. The pre-Zelenskyy government first resisted the idea in general. When under pressure of Ukrainian NGOs led by the Anti-Corruption Center and the country’s international partners the idea was finally accepted, the fight to make the court independent started. Today, functioning of the court is  on the list of Ukraine’s successes on the anti-corruption front.

The restaffing of the judiciary is foreseen by the anti-corruption strategy draft produced by NAZK, another anti-corruption agency created from scratch in 2015. Until autumn 2019, the agency was not effective and involved in scandals itself.

After the NAZK relaunch things went differently. The agency introduced a new form of asset declaration for civil servants. Also, due to the NAZK efforts, asset declarations of heads of the Security Service of Ukraine are finally public.

The draft anti-corruption strategy is praised by the professional community, while judicial self-governance bodies criticized its parts that outline how they should be reformed. It is important for NAZK to withstand attempts to compromise the strategy.

After its relaunch, the NAZK passed the test of commitment to the reform path. However, the test of being able to withstand political attacks is yet to come.

The glass of the anti-corruption fight is half full

During the last five years Ukraine proved its ability to establish effective institutions aimed to punish and prevent corruption. However, the risk of a rollback is always there, as the fight against corruption foreseeses pushing the so-called political elites, both former and current, out of their comfort zone. The influence of these people in Ukraine is still strong, therefore they will not give up easily.

Apart from punishment and prevention, Ukraine has a lot of work to eliminate corruption embedded into culture and to bring up political elites with a new mindset aimed at developing the country, not stealing from it.