Why Ukraine Should Take Notice of UK Parliamentary Elections | VoxUkraine

Why Ukraine Should Take Notice of UK Parliamentary Elections

On May 7, 2015 the Britons will vote in a general election which will determine the composition of the new parliament and affect the UK’s foreign policy. VoxUkraine has asked the UK Parliament candidates three questions about their views on the Budapest memorandum and territorial integrity of Ukraine, economic and military support to Ukraine, and whether the actions of Russia pose a national security threat to the UK. So, what can Ukraine count on?

In fighting its past, Ukraine needs public, political, and diplomatic support from the rest of the world. UK parliamentary elections on May 7th will determine the composition of the new parliament and will inevitably affect the UK’s foreign policy with respect to Ukraine.

VoxUkraine has asked the UK Parliament candidates three questions about their views on the Budapest memorandum and territorial integrity of Ukraine, economic and military support to Ukraine, and whether the actions of Russia pose a national security threat to the UK.

The good news, Ukraine is important enough that a number of candidates has taken time to respond. However, the responses suggest that the support for Ukraine is not unanimous. This should be a source of concern for Ukrainians. Indeed, the Ukrainian government can and should do a much better job at communicating facts to the UK politicians and fighting off Russian propaganda.

Interestingly, VoxUkraine requests have awakened Russian propaganda forces. A pro-Russian campaign called “Solidarity with the Anti-Fascist Resistance in Ukraine” led by Richard Brenner, who is not a candidate, prepared a template answer for Trade Unionist and Socialist Coalition (TUSC). This template has been used by several TUSC candidates. The template repeats Russian propaganda on the issues of Donbas and Crimea and suggests ‘NO’ answers to all three proposed questions. While TUSC is marginal and unlikely to be represented in the next UK parliament, this incident suggest two conclusions:

Here is the detailed description of the questions and the analysis of the responses.

Overall, 3,601 candidates out of all 650 UK constituencies were approached by email, and 109 answers have been received (response rate 3.0%).

The questions were as follows:

Question 1: In 1994 the UK was one of four countries that signed the Budapest Memorandum, which guaranteed Ukraine’s territorial integrity and sovereignty. Ukraine  fulfilled its promise and gave up its nuclear weapons. One year ago Russia annexed Crimea. Russia has sponsored war and terrorism  in Eastern Ukraine. Nine British citizens were aboard flight MH17 shot down with Russian missiles. If you become a Member of Parliament, would you support full restoration of Ukraine’s territorial integrity?

Question 2: To solve the crisis in Eastern Ukraine, Ukraine needs to strengthen both its economic and its military power, and pressure on Russia needs to be applied.

Question 3: Mr Litvinenko, a British citizen, died in November 2006 after being poisoned with the radioactive substance polonium-210 within 20 minutes walk distance from Buckingham Palace, London. British authorities submitted a formal request for the extradition of two suspects. Both were Russian citizens, but Russia declined to cooperate. Over the last year a number of incidents involving Russian bombers and submarines have been reported around the UK borders. Do you believe that Russian actions should be considered as a threat to the UK security?

Given low response rate, and lack of responses from major parties’ candidates, the survey cannot be called representative. Also, there can be some bias because people who respond favourable to Ukraine are more likely to answer and hence those not answering could as well be counted as ‘do not care much about Ukraine’.

Keeping this in mind, below we analyze the answers that we received.

Diagram 1 presents the party distribution of candidates who answered VoxUkraine questionnaire. Note that major parties that are likely to be in the next parliament are: Conservative (34% support), Labour (33%), UKIP (17%), Liberal Democrats (9%), and Green (6%). The last two parties’ candidates provided the highest number of answers and also expressed the highest level of support for Ukraine. 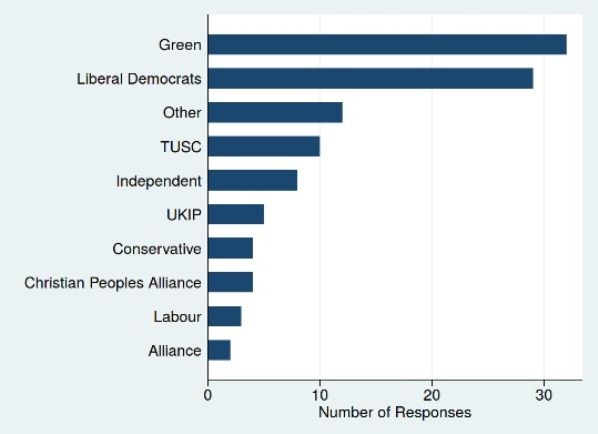 “We must do all we can to help, ensuring that the benefits of democracy and capitalism rapidly improve the well-being of the Ukrainian people. Then perhaps, the pro-Russian rebels will see that they have led their supporters into an economic and cultural cul-de-sac and, if so, we can again resume the renaissance of a wider European culture and economy.”

Similarly to Labour Party, the Conservatives are also likely to support Ukraine. Their manifesto says:

“We will continue to stand up robustly for Ukraine’s sovereignty and territorial integrity and the international rule of law. We want to see a Ukraine that has good relations with Russia but we also believe it has as much right as any other European country to determine its own future. The Ukrainian people have shown that they have had enough of the pervasive corruption that has held their country back. We will support them in their efforts to build a true democracy in which the law is applied fairly and fully to all. The EU also has a crucial role to play. We will continue to work with our European partners so that the EU works with the Ukrainian people towards these goals.“

Another party that has “instructed” their candidates about Ukraine-Russia case, except for above-mentioned TUCS, is Liberal Democrats, which is a part of current coalition and holds 57 seats in the House of Commons.

“Russia’s annexation of Crimea, complete with a referendum held at the point of a gun, as well as its presence in Eastern Ukraine, represents a clear violation of this basic norm of international law.

When the Ukrainian people expressed a desire to look to the EU, they did not at the same time express a desire to go to war with Russia. They are seeking a better life; one bounded by democratic accountable institutions – the same promise extended by the EU to the former Warsaw Pact countries.”

Green party candidates were very active in their responses. It is worth noticing that they were very diverse in their opinions towards Ukraine and UK support and don’t seem to follow one consistent policy regarding UK response to Ukrainian crisis. 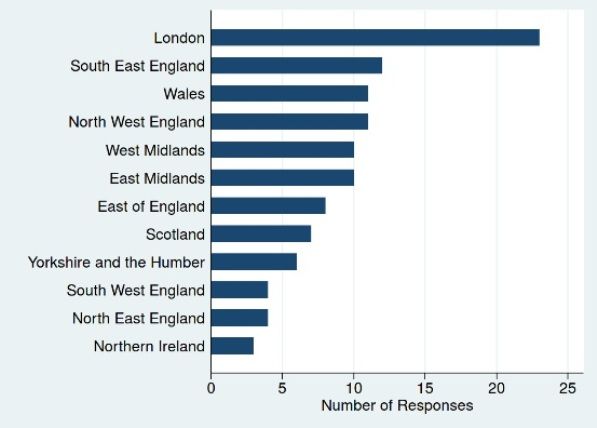 The next set of pie diagrams represents aggregated answers to the questions above. We see that the majority of respondents support Ukraine, although mostly argue for non-military support (the position promoted by major EU players). 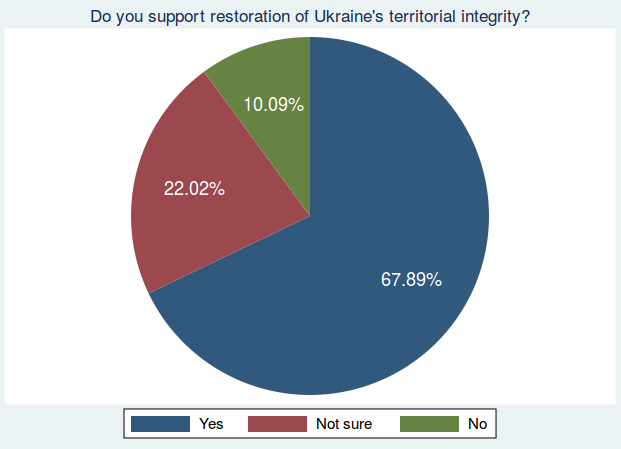 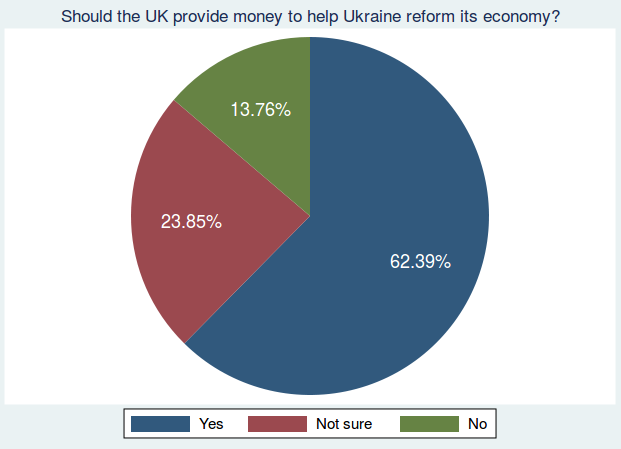 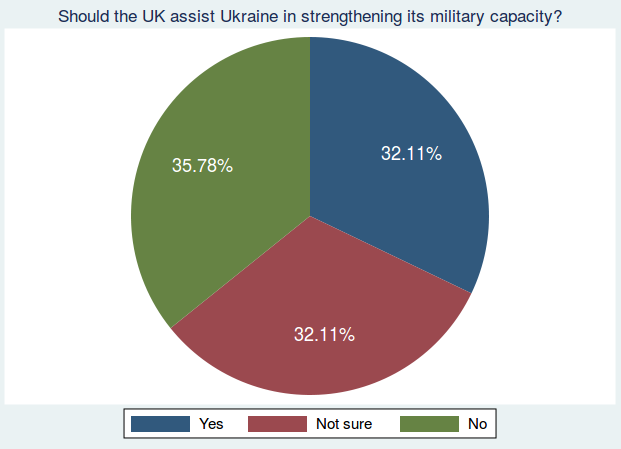 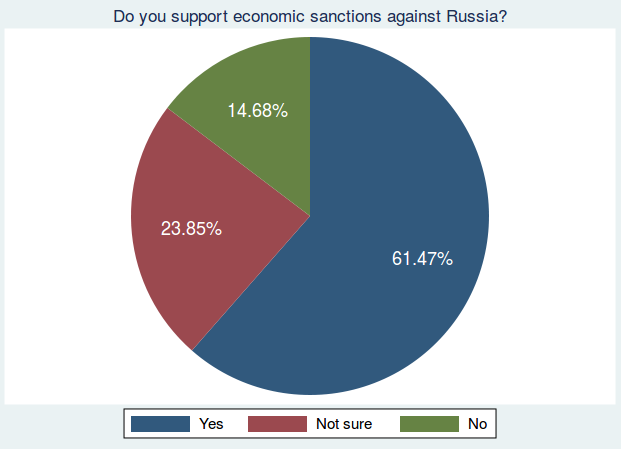 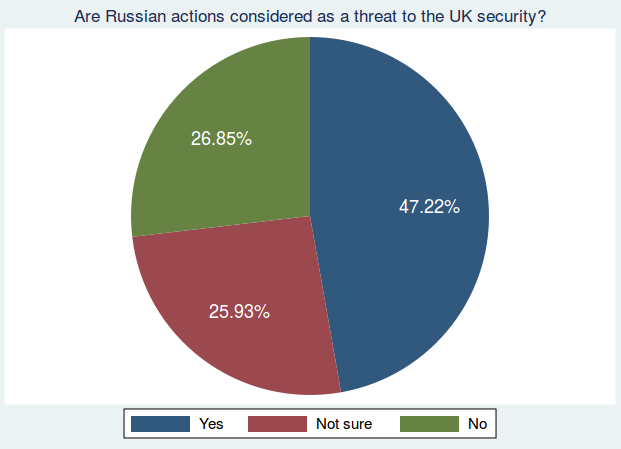 As can be seen from the diagrams above, the majority of respondents support restoration of Ukraine’s territorial integrity with the exception of TUSC party. However, many candidates also stress that it is a complex task and very difficult to achieve without Russian cooperation. A few Green party candidates have written exactly the same answer to this question condemning Russian annexation of Crimea, but warning against any attempts to reunite Crimea with Ukraine by force.

The majority of candidates who responded also support economic support for Ukraine and sanctions against Russia. However, only 47% consider Russia to be a threat to UK security. Overall, the candidates agree that Russia tries to provoke UK, e.g by intruding into UK airspace or sending russian bombers. However, they don’t seem to believe it represents real threat to the country’s security. Less than a third believe that UK should provide military assistance to Ukraine. Overall, the candidates advocate peaceful solutions using diplomacy or economic restrictions. 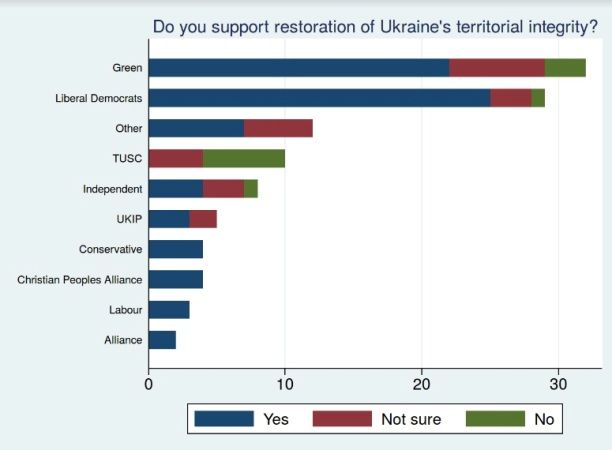 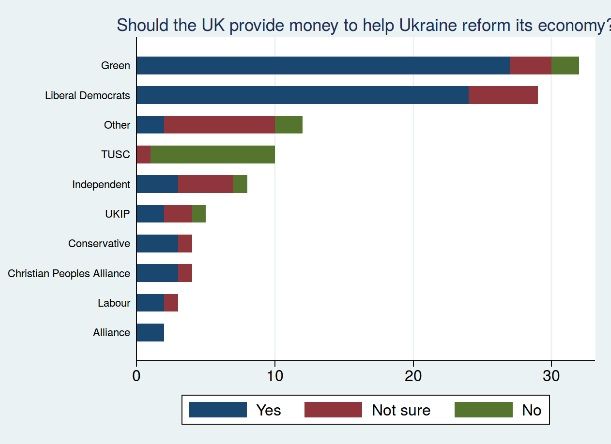 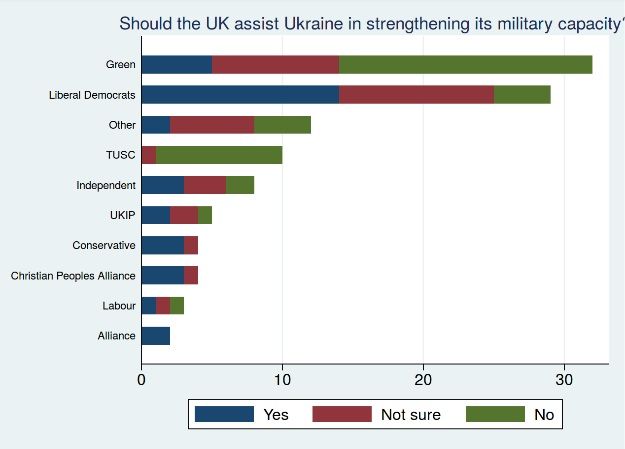 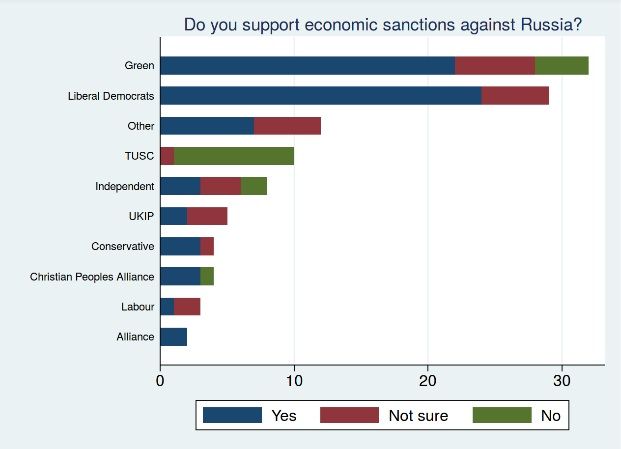 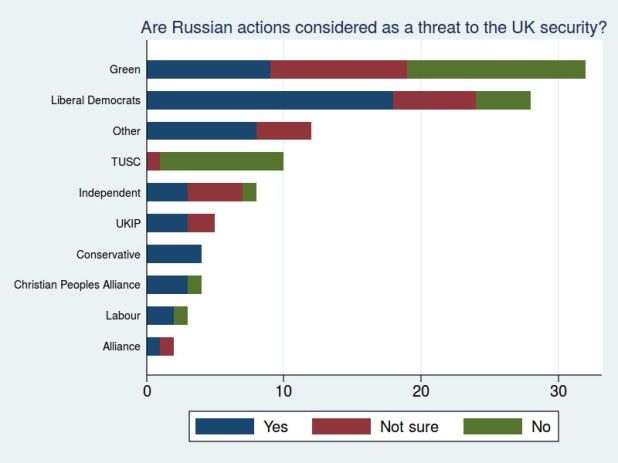 What conclusions can we draw from this small survey and reaction to it? First, that those people in UK who care about Ukraine mostly support its territorial integrity. Second, that nevertheless they don’t see Russian war on Ukraine as a threat to EU security and therefore, at most we can count on economic support. And third – that Russian propaganda is quite widespread and reaching to many people (although not many people actually believe it). Therefore, the Ukrainian government should put much more effort in promotion of the narrative that “Ukraine is fighting for the entire Europe” among the Europeans.