How to help internally displaced people (IDP) is one of the key problems faced by Ukrainian government after Crimea annexation by Russia and fighting with separatists in Donetsk and Luhansk regions in Eastern Ukraine. This is a new problem for Ukraine as it never faced any war conflict in its modern history. At the same time a number of former Soviet Union republics faced this issue.

For example, at least 34,900 IDPs, mainly from Chechnya and North Ossetia, are reported in Russia. 172,000 people were displaced in Southern Kyrgyzstan after the conflict between the Kyrgyz majority and the Uzbek minority in June 2010. The scale of the problem was particularly large in Georgia and Azerbaijan. After Karabakh war about 600,000 people were displaced in Azerbaijan which constitutes 6.2% of population. Moreover, about 5% of Georgians were displaced after conflicts in Abkhazia and South Ossetia.

Compared to conflicts in Caucasus, the situation in Ukraine is different in a number of aspects. First of all, the scale of problem substantially smaller, at least for now. Left panel of Figure 1 reports number of IDPs registered in all Ukrainian regions except Donetsk, Luhansk and Crimea. Total number of IDP from Crimea is about 10,000 and it is stable over observed time span. Number of IDPs from East (Donetsk and Luhansk) has tremendously increased in June-July and it is equal to about 60,000 people. Right panel reports number of new IDPs of the last period. The spike of East IDPs on June 26 could be due to longer length of periods (12 days while other periods include 4-5 days) and anti-terrorist actions in Eastern Ukraine. The number of new Crimea IDPs is just zero. 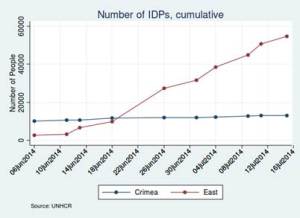 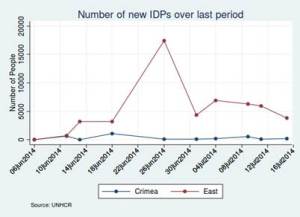 Another peculiar feature of Ukrainian IDP is their expected return to the original places of residence. Majority of IDPs in former Soviet Union Republics are permanent, as they fear to come back to their homes, located in different states. Similar situation is observed for Crimea IDPs only.

It is likely that many IDPs from Donetsk and Luhansk regions are likely return back to their homes when military actions are over and infrastructure is restored. This hypothesis is supported by Figure 2. More than half of East IDPs go to the neighbour regions. The percentage is much large (up to 75%) in July when military actions intensified. However, UNHCR (2014) reports that out of about 24,000 East IDPs registered in Kharkiv region, about 15K have already returned to Slaviansk. 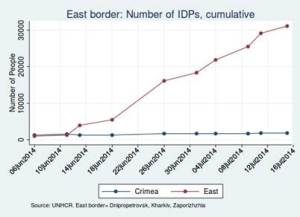 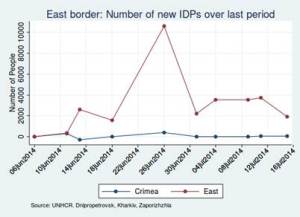 Figure 3 shows the number of IDPs in Kherson region, which borders Crimea but relatively remote from military actions in Eastern Ukraine. We observe no increase in number of new Crimean IDPs except July 8, when 400 people registered. The total number of East IDP increased during our time span and it is equal to about 700 which is substantially lower compared to regions bordering Donets and Luhansk. 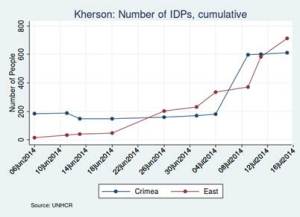 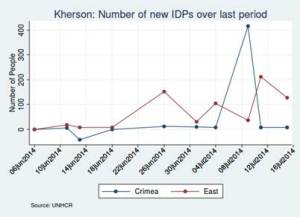 It is not surprising that majority of permanent IDPs choose the capital as their place of residence. Quality of life in Kyiv is higher than in any other Ukrainian region. However, the cost of living and required social benefits is also higher, which leads to additional burden on government budgets. Figure 4 shows that about 30% of Crimea IDPs registered in Kyiv regions but the flow of new IDPs from Crimea is low. The popularity of Kyiv as a destination is comparable to the popularity of capitals in Georgia and Azerbaijan. For instance, Tbilisi became residence of about 95,000 (out of 250,000) IDPs and about 216,000 IDPs (out of 600,000) settled in Baku, that is, approximately a third of IDPs came to the capitals. 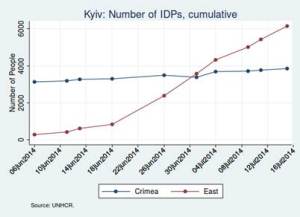 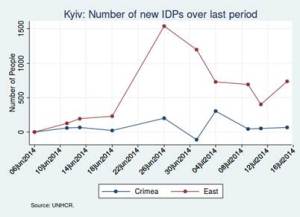 Finally, Figure 5 reports the number of IDPs in Volyn region, which is the most remote from both conflict zones and does not have large cities (above 500,000). Similar to Kherson region, we do not observe substantial increase in Crimea IDPs. The numbers of Crimea IDPs are comparable as well (about 200). This might be explained by family reason. This argument is also supported by low number of East IDPs coming to Volyn region. 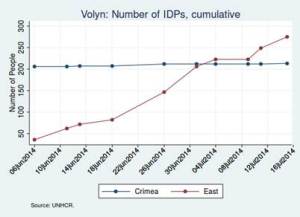 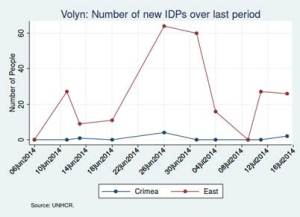 Unfortunately, the lack of data does not allow us to explore in detail socioeconomic characteristics of IDPs. Table 1 reports number of IDPs from East and Crimea categorized by age and gender. There are few differences between East and Crimea IDPs. First, share of women in total employable people is higher in East IDP group (38%) compared to Crimea IDP group (26%). This could be explained by the fact that men of employable age from East could either take part in military actions on either side of conflict or stay in conflict zone to look after property. Second, the percentage of children among non-employable people is lower in Crimea group (56%) compared to East group (63%). IDPs from East and Crimea have also some similarities. About half of IDPs are of employable age in both groups. Obviously, all these numbers have to be interpreted with precautions due to small sample size and lack of detailed information.

These statistics are consistent with temporary status and safety reason of East IDP as well as the stable number and permanent status of Crimea IDPs. Despite these differences both groups require support in the short run. The UNHCR suggests that priorities are food and close, access to social payments and pensions, access to bank accounts, access to public health services, access to educational institutions (kindergartens, schools, and universities). Surprisingly, registration of residence appear to be a problem. In order to register with local authority a deregistration from previous place is required. Obviously, the latter is a problem in conflict zones.

Nevertheless, the Ukrainian state, with support of international organizations and an army of volunteers, does its best within severe budget constraints. For example, the Law “On the rights and freedoms of citizens and the legal regime on the temporarily occupied territory of Ukraine” has been adopted. It focuses on IDPs from Crimea and regulates access to social payments, education, health services. This law is in line in structure to the best practices. Similarly, Georgia’s Law On IDPalso defines status of IDP, states IDPs rights and obligations and protects IDP property.

There are a number of further initiatives which could improve efficiency. First, it is developing of transparent IDP registration/reporting system. Current numbers of IDPs are likely to be lower than real ones. Easier registration might allow IDP to get faster access to the required resources. Furthermore, it would help international community to coordinate efforts with Ukrainian government. Second, we suggest to involve IDPs themselves in the planning of the return and reintegration process. This initiative might create some employment opportunities for IDPs. In addition, governmental employee with IDP experience might be better aware of needs and requirements of other IDPs.

Beside governmental support, IDPs might also need additional media support. As for now, Ukrainian and Russian media frequently report controversial stories. These reports and interactions in social media might result in a number of stereotypes. As a result, we would expect a number of the following views to emerge and should be addressed.

– IDP from East are Pro-Russian and are brainwashed by Russian media.

– IDPs are lazy and rely on handouts

– IDPs are not grateful for the help they receive

– IDPs get aid from government and other sources, while local people do not get

– IDPs get free housing but local people do not get

– local people considered IDP at the bottom of social ladder

– false accusation of being thieves or alcoholics

To overcome these perceptions a powerful social advertisement campaign and social support of IDPs might be required.