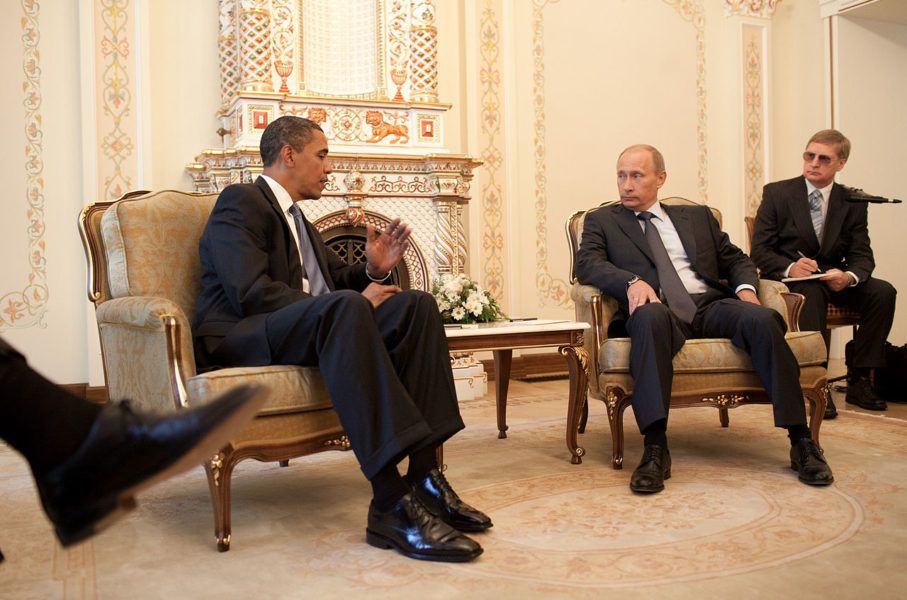 To the surprise of many, but not to those who understand him, Vladimir Putin has upped his aggression against Ukraine in the wake of the shooting down of MH17 by his separatist allies. (For a definitive account of separatist guilt, see AP What Happened: The Day Flight 17 Was Downed.) The Russian military is now routinely shelling Ukrainian positions from across the border, hoping to elicit a response so they can claim a Ukrainian attack. Russia’s drones are targeting troop positions. Even more sophisticated missiles are flooding across the border, ignoring the lesson of the Malaysian jet tragedy. Russian MIGs are shooting down antiquated Ukrainian SU fighter aircraft, depriving Ukraine of control of its own skies. (After shooting down MH17, a rebel commander called east Ukraine air space “our skies.”)

Putin’s propaganda war continues unabated, spinning fantastic conspiracy theories and accusing Ukraine of war crimes as they fight back against professional Russian mercenaries. Russian state television informs its viewers that the true enemies are the United States and NATO. Ukraine is just a lackey carrying out orders from above.

Putin knows that Western intelligence sees that he is tripling down, but he no longer bothers to hide his actions. He has decided the West is too cowardly, divided, and interested in money to do anything.

The New York Times is noted for its access to the inner sanctums of the Obama administration. Four of its top reporters collaborated on its Pentagon Plan Would Help Ukraine Target Rebel Missiles, which elaborates the administration’s thinking on Ukraine. To the shame of many Americans, the Times report confirms that Vladimir Putin has sized up Barack Obama correctly. He does not understand Putin. He responds to strength with weakness.

The Times article describes the debate within the Obama administration over a Pentagon and intelligence agency plan to provide real-time specific locations of surface-to-air missiles in eastern Ukraine. (Even though Russia claims they are not there, I guess we can see them). The Times reports that the plan “hasn’t gotten to the president yet.” He is described as busy rallying support for sanctions and gaining access to the crash site. When he does get around to it, however, the Timesreports that “it is unclear whether President Obama, will agree to give more precise information about potential military targets, a step that would involve the United States more deeply in the conflict.”

Administration officials, speaking on the condition of anonymity, describe the plan as part of “the debate over whether to send a stern message to Putin by aggressively helping Ukraine target the missiles Russia has provided.” These missiles have “taken down at least five aircraft in the past 10 days, including MH17.” (I welcome that the administration has no doubts that the rebels shot down the passenger plane).

Pentagon officials and Secretary of State John Kerry are said to back the plan as part of the effort to support allied and partner nations in defending their territory without direct American military involvement. They fear that “if Mr. Putin does not encounter significant resistance to Russia’s moves in Ukraine, he may be emboldened to go further.” A senior military official opines that “we think we could do it (targeting missile sites) easily and be very effective … but there are issues of escalation with the Russians,” and the Ukrainians may lack the precision to strike Russian-supplied antiaircraft batteries.

Let me break down four arguments within the administration singled out by the Times against providing real-time missile targeting to Ukraine – an intelligence service we currently supply to Iraq.

First objection: One administration official raises the warning that “we’ve been cautious to date about things that could directly hit Russia — principally its territory,” but also its equipment.

What in the world does this mean? Are we buying Putin’s argument that suicidal Ukraine is poised to invade Russia? Is the only thing holding Ukraine back targeting assistance from us? Does the Obama administration not know that Russia threatened “irreversible consequences” of Ukrainian aggression against Russian territory after one stray shell, likely fired by separatists, killed one civilian? If Russia wants to invade Ukraine with regular troops, it will fabricate an excuse, just as Hitler did for invading Poland.

What does “our caution against hitting Russian equipment” mean? Is it not valid for pro-Ukrainian forces to use all means to destroy the tanks, armored personnel carriers, and missiles supplied by Russia, or are these weapons of death off limits because they came from Russia?

Second objection: Another official characterized the debate as “over how much to help Ukraine without provoking Russia.” It is as if there is some golden mean whereby we help Ukraine in denying Russia its most prized objective without upsetting Russia! What logic! And these are the experts advising Obama!

What are the costs to the United States of “provoking” Putin? The reset has failed. The hoped for Russian support for U.S. policies in Iran and Syria has not materialized. What more is there to lose? Are we really worried that Putin will retaliate with a nuclear attack? That seems to be the only thing left that he has not done.

Third objection: Another Obama administration official argues that “if any strikes (prompted by U.S. targeting) missed their targets, they could cause civilian casualties or land in Russia, giving Mr. Putin an excuse to enlarge the conflict.”

Does this administration official not know that the pro-Russian separatists routinely locate their headquarters in schools and hospitals and that they hide the BUK missile systems in a densely populated areas? There are enough civilians being killed by normal military operations as the rebels employ Putin’s recommended “human shields” strategy. (Putin: Let the Ukrainians “shoot their own people.”) True, Putin could use civilian casualties as an excuse to introduce Russian peace keepers, but too many would understand that Russian “blue helmets” are Russian troops tasked with decimating Ukrainian forces.

Fourth objection: Yet another senior administration official raises the possible objection to missile targeting that “Ukraine is not a NATO ally, complicating the question of how to support its government.”

As far as I recall, the anti-Khadafy rebels, whom we assisted with air power, were not members of NATO. We considered giving lethal assistance to the anti-Assad rebels before we discovered that many were Islamist extremists. We have not been queasy about supplying lethal assistance to any number of questionable regimes, yet when it comes to Ukraine, fighting an expansionist Russia on the West’s behalf but without its assistance, we suddenly must worry about the formalities of alliances? This does not sound right to me.

Despite compelling reasons, the Obama administration has allotted Ukraine the paltry sum of $33 million in nonlethal support such as meals-ready-to-eat, bomb-disposal equipment, night vision goggles, radios and engineering equipment – most of which has yet to arrive – as Senator John McCain pleads in frustration: “How can we not give them military assistance with all the Russian arms flowing in?” Bipartisan calls in Congress to supply weapons, ammunition, military vehicles and training go nowhere.

The internal Obama administration debate – it seems the president is largely absent – displays a shocking lack of understanding of Putin and his KGB state. They seem to think Putin is a normal head of state with normal objectives. The Economist understands Putin better than any of Obama’s advisors as a vain, power-hungry tyrant who could care less about his people, who bases his regime on a web of lies.

No matter what we do – placate or resist – we are the heavy in the Ukrainian conflict as far as Putin’s propaganda is concerned. Despite incredible setbacks, including giving up on the dream of New Russia, Putin knows only to escalate until he encounters resistance, and so far he has encountered none other than what Ukraine can mount with its meager resources. He is willing to tolerate the world’s opprobrium with MH17. Such things will pass soon, as the West moves on to other things and he stonewalls. He has his own apologists in Europe and the United States, who equate any military assistance as one step away from “boots on the ground.”

I don’t understand how we could lose by supplying military aid on a big scale. We would not lose credibility or get ourselves into a war as long as we make no commitments to put our troops into battle. If our assistance proves effective, Putin would have to escalate or lose. If he loses, great for Ukraine, the United States and the West in general. If he escalates, he might still lose. If he wins through a large escalation, he demonstrates that he intended an annexation regardless of the cost. In such an eventuality, we have lost nothing through our assistance, but we have gained two things. We make aggression costly and less likely to be repeated. I do not see any risk.

The Obama administration does not know how to make strategic decisions. Or perhaps they do not want to make decisions in general. If they would map out a decision tree, as is taught routinely in business programs, they would know this is a no-brainer.