Will the Russian downing of the Malaysian Air 777 and the loss of almost three hundred innocent lives make a difference in Russia’s war against Ukraine? 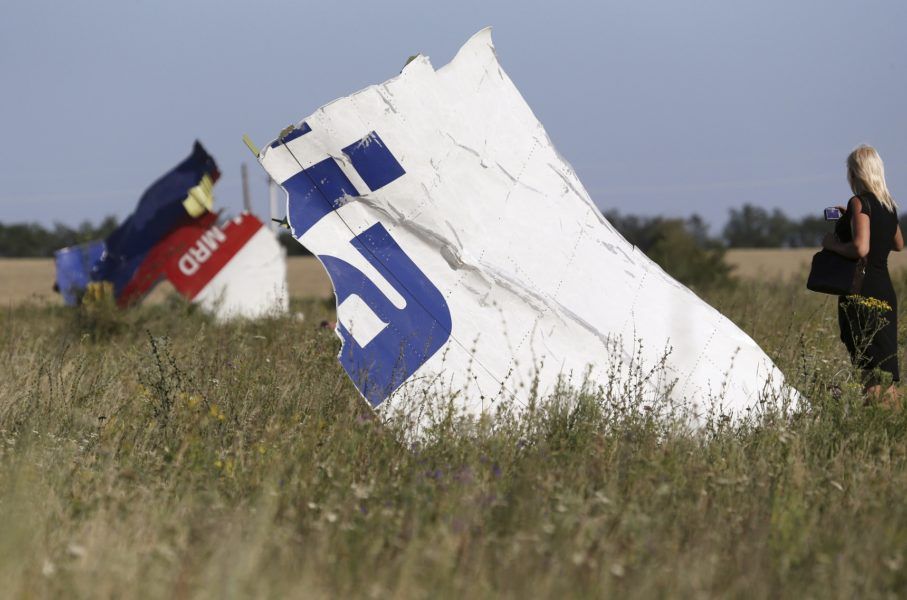 Around 4:20 pm, a Malaysian 777 carrying 295 passengers and crew disappeared over east Ukrainian air space a few miles from the Russian border. It disappeared in virtually the same location as the Ukrainian military transport AN-26 shot down by a missile a few days before.

The social website of the self-appointed military commander, Colonel Igor Strelkov, of the self-proclaimed People’s Republic of Donetsk, first celebrated the downing of the plane with the following 5:07 pm announcement on the Strelkov web-site (see image): 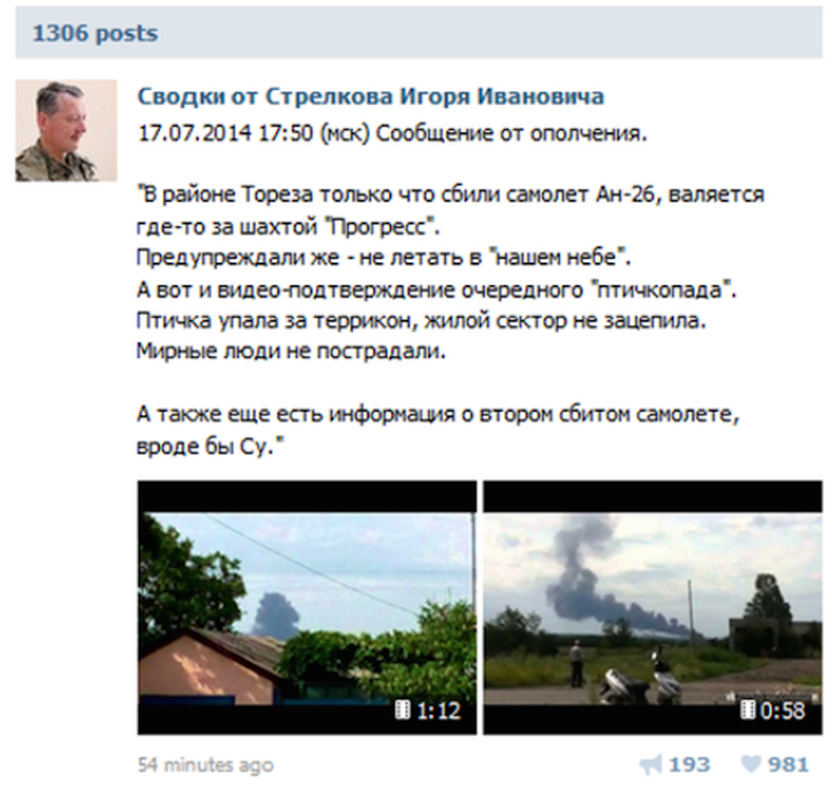 “In the Torez region, they have destroyed an AN-26 transport plane. Its wreckage landed near the ‘Progress’ mine. This will teach them: Do not fly in ‘our skies.’ And here is the video confirming the ‘crash of the bird.’ The bird fell on open fields. It did not damage inhabited sectors. Peaceful people did not suffer. And there is information about a second destroyed plane; looks like an SU.” (With widespread wreckage perhaps those on the scene thought they had shot two for one?).

ATTENTION. This announcement declared that the news of the downing of the AN-26 was not official but came from residents and militia members on the scene. The only official announcements are published under the banner: Strelkov INFORMS. In other words, Strelkov asks his readers to forget the earlier announcement of the successful downing of a fascist Ukrainian plane.

Ukraine intelligence services intercepted a series of purported phone calls from officers of the separatists to their superiors. Readers can listen to the YouTube. It’s in Russian, with English translations. Below I provide some excerpts.

The first call, from field commander “Bes (Demon)” to a Russian military intelligence colonel, Vasiliy Geranin, reported that a plane had been downed some 15 minutes earlier. Bes did not know the details but his people were going to photograph the site.

“Major” then reported to “Grek” at 5:32 pm that the plane had been destroyed by “Kazaks” at the check point Chernukhino and that the wreckage was that of a civilian plane, with a catering kitchen, bodies, chairs, documents. When asked whether the plane carried weapons, the answer was “no weapons.”

The third call at 5:42 from “Warrior” to “Kozitsin,” “Warrior” confirmed that it was a civilian plane, although the downed plane had earlier been called an AN-26 transport, that there was “a sea of bodies” of women and children and Indonesian university students, and was marked as an civilian Malaysian carrier. “Kozitsin” showed little concern and declared “the plane must have carried spies. We are in a war after all.”

The story that Russian mercenaries shot down the 777 by mistake makes complete sense. It appears to be confirmed by the commanding separatist officers and by those on the ground. It shows the shift in mood from celebration to foreboding as they learn they had killed hundreds of civilians.

Here is the video of heavy military equipment including missiles purportedly fleeing the scene from which the Malaysian 777 was shot down.

As to the availability of BUK missiles at check points like Chernukhino, the Associated Press reported that a similar launcher was seen by its journalists near the eastern Ukrainian town of Snizhne earlier Thursday. The BUK missile system can fire missiles up to an altitude of 22,000 meters (72,000 feet).

In its July assessment, the U.S. State Department warned that Russia continues to accumulate significant amounts of equipment at a deployment site in southwest Russia. This equipment includes tanks of a type no longer used by the Russian military, as well as armored vehicles, multiple rocket launchers, artillery, and air defense systems….More advanced air defense systems have also arrived at this site. The State Department warned that: “We are concerned much of this equipment will be transferred to separatists, as we are confident Russia has already delivered tanks and multiple rocket launchers to them from this site.”

The London Daily Telegraph reports that Ukraine will present evidence of Russian military involvement in the Malaysian Air 777 crash. The military leader of the terrorists Igor Girkin (Strelkov) commented directly after the plane crash, believing that it was a Ukrainian jet that had been destroyed. As noted above, he later attempted to retract his earlier statement. Per the Telegraph, the Associated Press is reporting that one of its journalists saw a launcher that resembled a Russian BUK system—the kind that Ukrainian government says carried out the strike—in the vicinity.

Putin’s propaganda machine will launch a furious effort to blame Ukraine, the CIA, the U.S. State Department, or dark forces that have it in for Malaysian Airlines. It will find many conspiracy buffs to support its wild yarns. However, the true story is simple: The Russian mercenaries, having celebrated their downing of two Ukrainian air force planes, were ready for another triumph. They set their radar sights on an incoming plan which they assumed to be a Ukrainian military transport and shot it down. Within a few minutes, the separatist authorities and their Kremlin handlers knew they had shot down a civilian plane. They did not seem that shaken. As officer Kozikhin retorted: “Well the plane must have carried spies. Do they not know there is a war going on?”

Will the Russian downing of the Malaysian Air 777 and the loss of almost three hundred innocent lives make a difference in Russia’s war against Ukraine? Yes. If Putin has any sense, he will withdraw all his officers and intelligence agents from the scene. He will try to convince the world this was not Russia’s fault, but he cannot succeed in so doing. The attention of the world is now on east Ukraine, and news reporters can scarcely be denied free access. Even if denied access, there is plenty of evidence in the form of YouTube videos, intelligence reports, and eyewitness accounts that prove that Russia had already invaded Ukraine with tens of thousands of troops and heavy military equipment – facts that the West did not see or did not want to see. I doubt that the Russian public will be so enamored with Putin once they learn that his loyal people’s militias marauding in east Ukraine killed three hundred innocent people.

With respect to Putin, there are two interpretations: One is that he controls Russia almost single handedly with his noted vertical of power. If so, he must be held personally responsible for what his agents did. The second interpretation is that Russia is falling apart as mercenaries move themselves and heavy military equipment at will within Russia and across its borders.

Neither places Mr. Putin in an exactly favorable light. Let’s see how he squirms out of this.

Paul Gregory serves on the International Academic Advisory Board of the Kiev School of Economics. His views do not represent those of the school. His latest book is Women of the Gulag: Portraits of Five Remarkable Lives. Repost from his blog.