Separatists May Be Exaggerating Ukraine Referendum Turnout By 300% 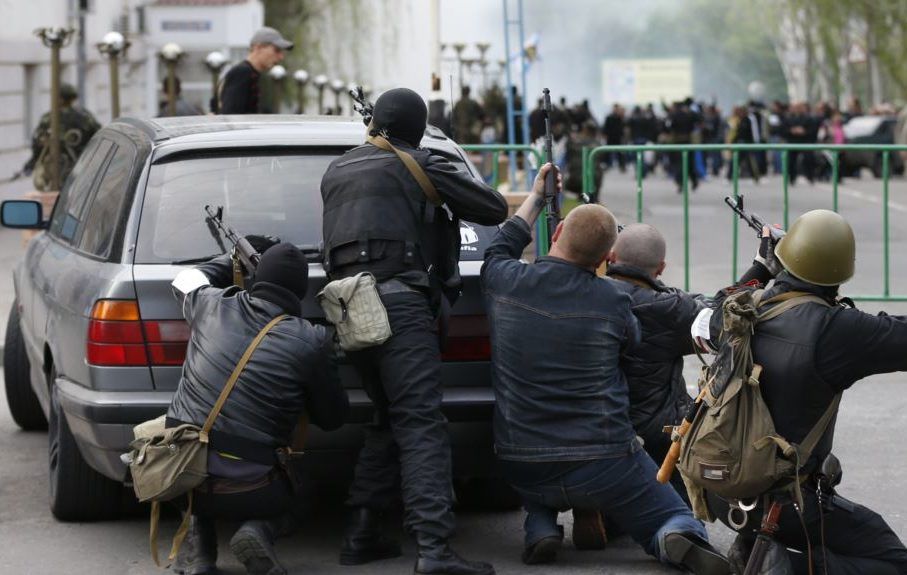 Separatists in Luhansk oblast have officially announced that 96 percent of eligible voters approved the referendum on independence (See: Ukrainska Pravda). According to the KyivPost election update, separatist officials are reporting 89 percent for seceding and 10 percent against in Donetsk Oblast. Donetsk and Luhansk make up the lion’s share of the contested Donbass region.

East Ukraine separatists are celebrating what they claim is a huge electoral victory in the May 11 referendum. These Crimean-scale election results are pure falsification.  I report here more believable results that show one third the turnout of the separatist claims and confirm earlier polling data that show 70 percent of East Ukrainians want to keep a united Ukraine.

As Moscow eagerly accepted as gospel truth the referendum results, the Western media reacted with confusion. German television news led with “a majority voted clearly in the referendum for separation.” The Wall Street Journal (See Vote in Ukraine Emboldens Separatists) points out the unclarity of the referendum question and its chaotic (and illegal) circumstances, but concludes that the “long waits at some voting stations helped turn simmering anger against Kiev into open defiance.” The New York Times (See: Chaos Marks Ukraine Vote on Separation) reports large crowds and a festive atmosphere at polling stations, while expressing doubts about the election process.

The general Western media takeaway is that, indeed, large numbers of disaffected voters stood in long lines to vote in favor of “independence,” while pointing out the chaotic atmosphere and warning of the opportunities for massive voter fraud.

No major media outlet has dug into the Crimean-like election results – 89 to 96 percent in favor, despite a Pew survey taken shortly before the referendum (See the Pew Foundation, Despite Concerns about Governance, Ukrainians Want to Remain One Country) showing that less than 20 percent of east Ukrainians favor secession and 70 percent want a united Ukraine.  The chasm between the result predicted in a fair election and the 90 percent plus reported vote should raise serious eyebrows.

Simple logic and observation yield quite different results and reveal that the Pew poll was remarkably on the mark despite the demonstrations, armed clashes, and presence of Ukrainian troops nearby.

Facts about the May 11 referendum supplied to me by a knowledgeable Donetsk professor (whose name I withhold for safety reasons) offer material for an independent calculation of the actual Donetsk referendum results:

In Donetsk (a city of one million), 35 polling stations were combined into 9 in the city center, representing a total of 80,000 eligible voters. In other districts, one sixth of the usual polling places were open. Moreover, the polling stations were located in schools and not in larger venues like concert halls, large factories, or other public buildings. The polling stations lacked voter registration roles, so poll workers had to write down by hand each voter’s name, address, and passport number.  Poll workers complained about working unpaid and that regular poll workers refused to work without pay. (On this latter point, see Novaya Gazeta, Lugansk: Not a referendum in the real sense of the word).

My Donetsk colleague observed the whole day of voting from an outdoor café opposite a voting station in central Donetsk, keeping count of the voters going in. According to his tally, the station processed a maximum of 2,500 voters for the day, or about 200 an hour, or about 3 a minute. The greatest numbers came in the late morning and early afternoon. By evening, the flow of voters had fallen to a trickle. He saw no lines.

Applying these observed numbers to the 9 central districts representing 80,000 eligible voters, we get a turnout (what in Russian is called yavka) of 28 percent versus the official claim of 89 percent!

It must be noted that one voting station (Donetsk’s School No. 9) claims that it processed 6,000 voters on May 11. This racing assembly line would have had to write down the names, addresses, and passport numbers of voters at the rate of one voter every ten seconds. Those who recall the Soviet period would want to award the head of this polling station a Stakhanovite medal.

Independently of my Donetsk colleague’s exercise, a Facebook post reports a similar experiment conducted in Mariupol, a city of slightly under a half million, the site of violent street demonstrations and fighting of late.

Facebook tally of Mariupol vote. First line: voters per minute, then per hour, then per day for a total of 14,400 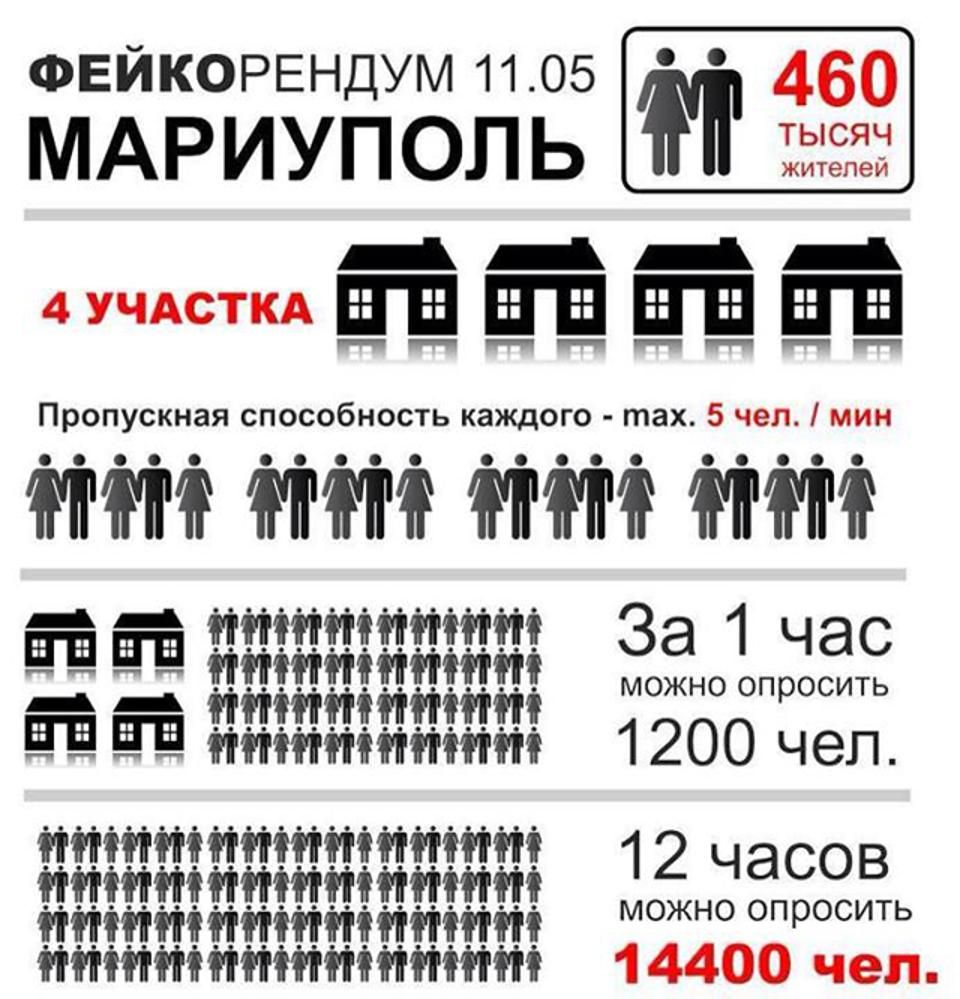 The calculation (shown here as a graphic) is based on the fact that separatists opened four polling stations (all in schools) to service a population of some 330,000 eligible voters. (Each voting station would therefore have to be prepared to handle 82,000 voters (with a hundred percent turnout) or 2 voters a second! No wonder there were long lines. To handle these numbers, each station would have had to have a 30 mile-long line queuing in front.

The Mariupol calculation uses a maximum capacity of one person a minute (rounded to 5 persons for 4 stations), which yields a maximum number of voters in 12 hours of 14,400 for the four stations, for a 5 percent voter turnout versus the official claim of 96 percent. Quite a difference. Perhaps Mariupol is where the purported pre marked ballots were used.

Note as well the photos of the huge voting urns being emptied for the press. They contain hundreds of ballots not tens of thousands.

Poll workers emptying ballot boxes for counting for the press 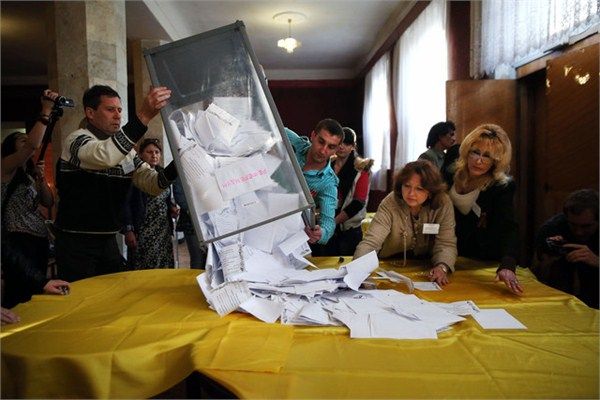 In both the Donetsk and Mariupol cases, separatist officials will argue that they opened unofficial tents and other makeshift voting locations, but these, at best, would have accounted for a small portion of the vote. Residents were told to go to the official voting stations. In fact, the only real crowds that were observed by reporters were in Mariupol. This was probably a deliberate move – few voting stations guarantee voters standing in line. (See photo). 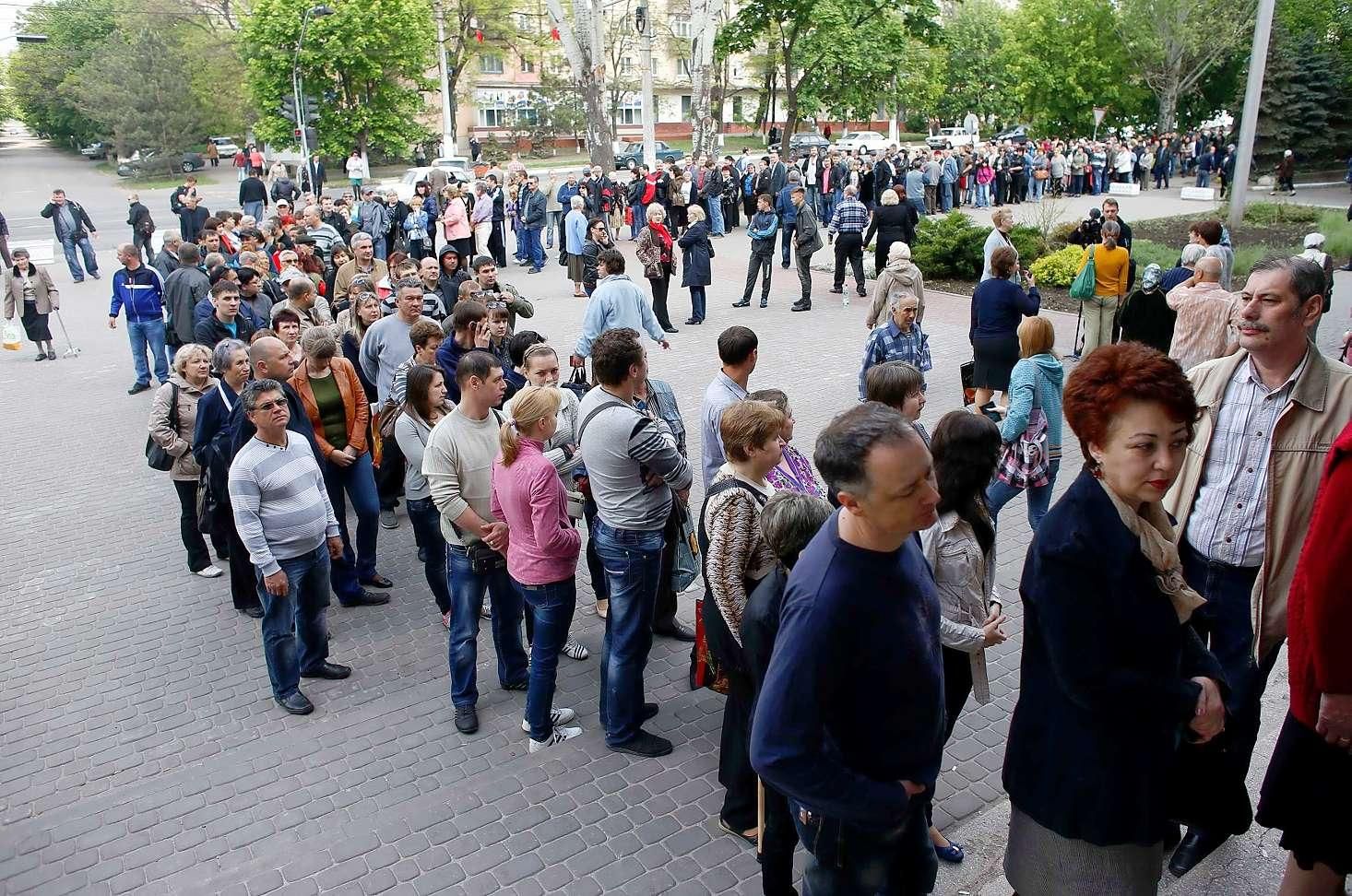 We need not worry about the statistics of those voting who voted yes. Only the strongest of no voters would have entered a polling station in Donetsk or Mariupol, where he or she would have encountered men toting s and manned by separatist poll workers. To add insult to injury, the voting urns were transparent plastic, so observers knew whether the voter checked “yes” or “no.” The Noyaya Gazeta account describes the vote counting scene at a polling station, as each worker calls out when he or she comes up with a rare no vote. As a first approximation, we can say that the percentage of yes votes should be close to 100 percent, given the voting environment. Anything other than that would be a surprise.

In sum, reasonable calculations based on observation, logic, and experience place the percentage of eligible “Peoples Republic of Donetsk” voters who turned out to vote at under 30 percent. Virtually all those who cast their ballot voted yes. The under-thirty-percent result conforms closely to the earlier Pew poll. Moreover, it is consistent with the 24 percent (Luhansk) and 32 percent (Donetsk) turnout calculated by the Ukrainian government. (See Kyiv Post Turchinov calls referendum a farce).

The turnout figures I come up with are not the final word. As time passes, more information will leak out, and we can have a more precise count of the real vote. I publish my results early because the crazy and fantastic official results will be hammered on by Putin’s propaganda machine until people start to believe them. Recall that the true figures (See: Putin’s ‘Human Rights Council’ Accidentally Posts Real Crimean Election Results) for the sham Crimea election did not come out for two months. By that time, it was already too late.

In the meantime, I wonder why Donetsk and Luhansk separatists insisted on a vote outcome that would do North Korea’s Kim Jong Un proud.