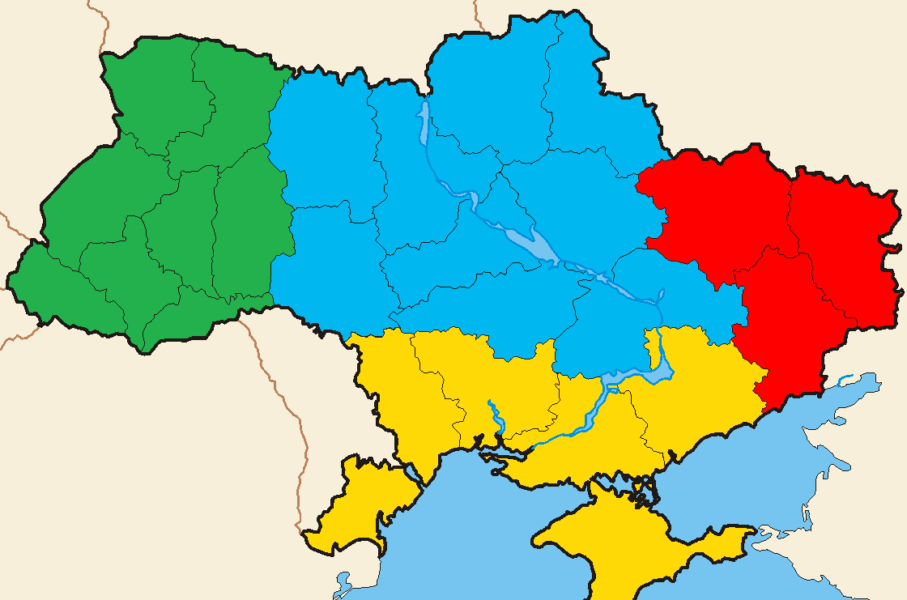 Shortly after Russia swallowed Crimea, its appetite grew even stronger: next day after March 16 Crimean referendum Russian Foreign Ministry called upon Ukrainian government to create a new constitution providing for “democratic federal state”. On April 17 Vladimir Putin questioned Ukrainian current borders and called its eastern and southern part “Novorossiya” (New Russia, Russian-speaking regions formerly controlled by Russia during the imperial times). By the end of the month federalization in Ukraine has become #1 issue in Russian-Ukrainian dialogue.

Sergey Lavrov, Russian Minister of Foreign Affairs, in his interview stated that Russia must insist on federalization “not because we want this, but because it is a request of the southern and eastern regions.”  Ukrainian Transitional Government strongly opposes the idea of creating a “federation” out of a unitary state and views Russian suggestion as an attempt to “dismember” a country. At the same time the idea of decentralization of power has acquired recognition and support from Ukrainian officials and is currently promoted to become central in the reforms package. Unexpectedly President of Belarus Alexander Lukashenko (old Russian ally) joined Ukrainian side and commented that federalization would “split the country” and “destroy the Ukrainian state.” This post makes humble attempt to distinguish between Russian “federalization strategy” and Ukrainian “decentralization ambition” and clarifies whether one should follow Mr. Lukashenko’s example.

Russia has been insisting that Ukraine should adopt a federal form of government and award regions with authority over its own “economics, finance, culture, language, education, foreign economy and cultural ties with neighboring countries or regions.” In line with the claim concerning the alleged abuses against Russian-speaking population, Russian authorities are playing this card again and again (proved to be nonsensical in a post 1, post 2, post 3): along with insisting on Ukraine’s alleged inability to protect minority rights, they also claim that Ukraine failed to develop its own identity or historical narrative, common for all the regions. Additionally, Kremlin criticizes the current system of appointing governors from Kiev and suggests that federal form of government would provide for “neutrality of state” (it is assumed that such system contends with each region’s particular identity and obliges them to coexist within the single state framework).

At a first glance it looks like a reasonable advice based on Russian own experience. However, the first glance is deceitful: actually Russia requests Ukraine to create a confederation, while similar mode of state organization proved to be inefficient in Russia and lately transitioned to highly centralized, close to unitary form of government. In early 1990s, after the “Parade of Sovereignties”, transition to federation was the only solution for Russia to maintain its “inherited” boundaries (see more here). In the case of Ukraine, the situation is substantially different since the state is facing a different challenge: external military threat to the territorial sovereignty.

In terms of minority protection and political engagement of minorities, Russian example also provides for little melioration. Federal Agreement 1992 named three different types of constituent entities of the Federation; scope of their competences and the breadth of discretion varied substantially depending on potential threat of growing separatism (that was reflected in bilateral agreements between such entity and federal center). Later on, these differences blurred due to the leading tendency for intense centralization and concentration of power in the hands of federal government (regions of European unitary states usually possess more powers in the sphere of budget and local administration then federal entities in Russia). The substantial difference, which remained, is Russian language policy: Russian legislation does not provide for any status of “regional” language (in alternative to currently existing in Ukraine). That’s why the probability of violation of minority rights under current Russian legislation is more probable than under Ukrainian rule. Hence, Russian government demands Ukraine to perform the act, which Russia currently doesn’t have the guts to do, in the conditions of permanently high political pressure, and considering that such action won’t result in the inclusion of national and ethnic minorities into political process.

Ukraine rejects any type of such “advice” since it deems federal form of government as a political mode, which makes eastern and southern regions vulnerable to Russian invasion/interference. First of all, Ukrainian people poorly support the idea of federalization: according to the survey by the International Republican Institute, overall 14 percent of Ukrainians support federalization. Yuriy Yakymenko, a political expert at the Razumkov think tank in Kiev, calls the “federalization problem” absolutely artificial attempt to prevent Ukraine from integrating with Europe. Ukraine’s Acting Prime Minister, Arseniy Yatsenyuk, expressed an opinion that “…the federalization issue may lead to a situation where, instead of one Yanukovych, we will have lots of little Yanukovyches.” Oleksy Garan, a professor of comparative politics at the National University of Kyiv-Mohyla Academy, shares this view: unless local (regional/city) administrations and legislatures are vested with executive powers, federalization is likely to lead to accumulation of power by “feudal princes” in eastern Ukraine. He also insists that Ukraine needs decentralization as a form of actual self-government. Indeed, the process of redistributing and delegating powers to local elected authorities not only addresses the flaws of the current system of “Kiev appointees”, but also supports the growing need of minorities political engagement highlighted by the number of international bodies (see previous discussion). More importantly, if accurately implemented, it provides for preserving current unitary state organization while providing for actual benefits for the local communities which should get empowered to make essential economic and social decisions concerning each particular locality and affecting it. Finally, the decentralization strategy goes in line with Ukrainian pro-European vector since it promotes democracy in action from the roots to tops.

After all, one must admit that Mr. Lukashenko’s statement totally made sense. Russian demand for federalization only increases the eastern-western antagonism in Ukraine, and most likely won’t result in any political or social improvement (judging from Russian 90s experience) and in the best case brings country back to where it started. Moreover, Russian reference to its own political past is totally irrelevant since the internal and external political and economic conditions are different: Russia was “collapsing” through the motion of former USSR republics and Ukraine is commanded to split apart by the “polite” request of the paramilitary groups without identification signs eventually recognized by Mr. Putin as belonging to Russian militia. And third, such radical step as federalization must belong to the means of last resort. Luckily, Ukraine has not exhausted alternatives to federalization, namely the Transitional Government is more than willing to trigger decentralization process providing to broader political engagement of local communities, including national and ethnic minorities, while preserving unitary form of country.