Is Putin’s New Type Of War In Ukraine Failing? 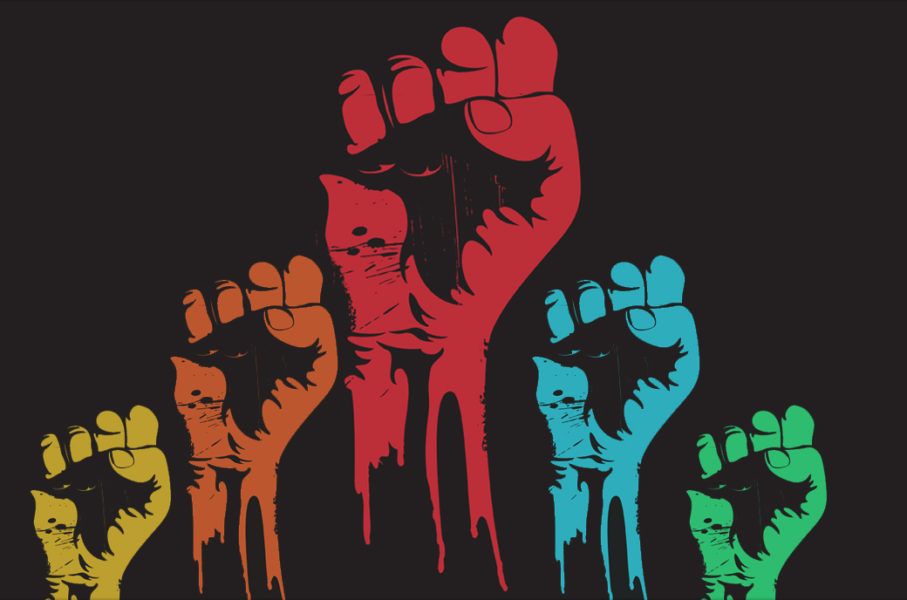 As the Kiev EuroMaidan demonstrations were gathering momentum in late February, Anne Applebaum prophetically wrote: “Putin doesn’t need to invade Ukraine. He can destabilize it from the Kremlin.” So far, Applebaum’s insight has proven correct. What we have seen is a covert war of destabilization, rather than an invasion by conventional means. While we focus on the 40,000 troops amassed on the border, Putin has, all the while, been conducting a war of another kind in ten strategic cities and towns in eastern Ukraine.

The epicenter of Putin’s covert war, these grimy, depressed cities — with exotic names like Slovyansk, Kramatorsk and Horlivka — have been seized, according to a common script, by faceless self-proclaimed mayors, unidentified Russiann special forces, “protest tourists” and local criminals. They demand separation from what they call the criminal neo-Nazi and fascist government of Ukraine. 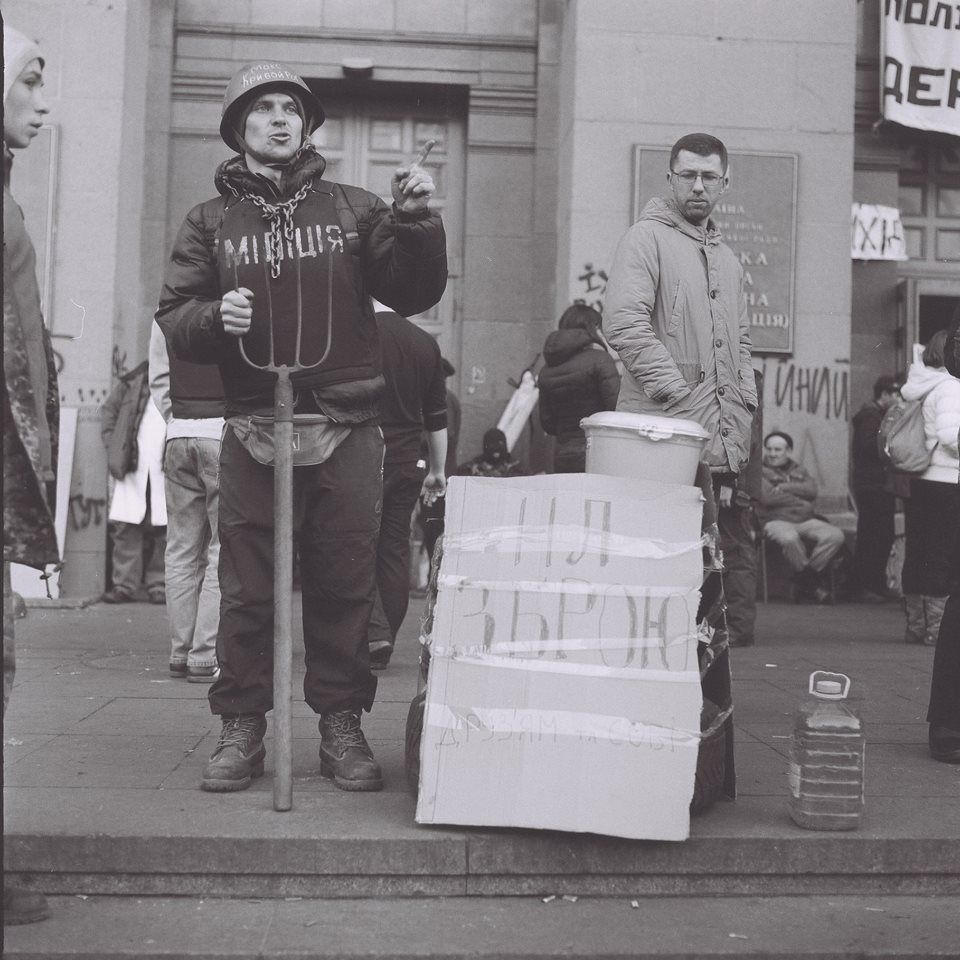 First, civilians, women and children represent “an important military force” in the war. As Putin himself suggested in his March 4 press conference, “Let them [the Ukrainian forces] try to shoot at their own children.” Indeed, Ukrainian barracks in Crimea were stormed by human shields of local men and women followed by armed special forces. Ukrainian forces, attempting to retake check points outside of Slovyansk, were neutralized by crowds of civilians surrounding their tanks. Ukrainian intelligence reports that armed separatists hole out and store arms in local schools and kindergartens.

Second, Putin’s new kind of war considers the media as a key battleground. Writes Latynina: “PR operatives are a no less important component than the living shield … The goal of one or another operation is public relations rather than a direct victory on the battlefield.” Indeed, Russian propaganda has been broadcasting 24/7, featuring bald-faced lies, distortions and staged incidents, mixed in with partial truths, designed to outrage domestic viewers and frighten audiences in southeastern Ukraine.

Third, accuse others of what you are doing. In this way, “the aggressor blames others for the victims he has in fact created.” In Ukraine, writes Latynina, “Moscow is sending armed diversionists into Donetsk and organizing the local dregs of the population, but at the same time, it accuses the West of doing the same.” Indeed, not a day passes without reports of Ukrainian snipers flushed from their lairs, of spies on the payroll of NATO or the state department or of Nazi extremists attacking innocent civilians just because they are Russian.

Fourth, Putin’s new kind of war aims to “zombify” the local population with hysteria about a rabid enemy that does not exist. As Latynina writes: “The main object of attack is the brains of those whom you are ‘liberating.'” Indeed, east Ukrainians have been fed such a steady diet of rape, murder and pillage by sinister neo-Nazi extremists that these fantastic stories gain traction. A resident reported to me that Donetsk was outraged on Friday by stories of a “Right Sector” extremist gunning down a 14 year-old girl.

I would add two more components to the new kind of war:

Fifth, take advantage of the local economic misery — unemployment, delayed wages, falling living standards — which you have helped create by cancelling Russian contracts and by other forms of economic subversion. Unemployed, unpaid and frustrated workers and their families can be lured into occupying buildings and taking part in protests, sometimes for a small payment. They become part of the human shield, not because they hate Ukraine or love Russia, but out of economic desperation.

Sixth, do not hesitate to make claims and take actions that require a suspension of logic under normal conditions. Expect people to accept the claim of a stranger to the city that he is now the major, appointed by a non-existent “Peoples Republic,” to not blink an eye when an unidentified Russian officer declares himself the commander of the “Self-Defense Forces of Donetsk” or to accept the claim of a self-appointed mayor that the kidnapped team of accredited international observers from the OSCE must be held as NATO spies.

According to a report by the Atlantic Council, Russia has been preparing for this new kind of war for several years, building “very covert but well-structured networks with agents, with pro-Russian organizations, involving in such illegal activity many Ukrainians.” Russian special ops officers “are very dangerous, well armed, [and well] prepared to do what they are doing now.” Many are veterans of Chechnya or even Afghanistan. A number of them moved to Ukraine after the collapse of the Soviet Union in 1991; so they can claim to be regular Ukrainians just defending themselves.

First, a covert war gives him plausible deniability. Putin and his foreign minister can continue to lie that Russian forces are not in Ukraine, until it is no longer possible. Putin denied that Russian troops were in Crimea before annexation, but the Russian army’s own training film of the Crimean Anschluss shows their special forces seizing parliament to start the annexation operation on February 27.

Second, a covert war offers a fig leaf for Russian apologists, who help in the propaganda war, and for Western politicians (and businessmen) looking for any excuse not to impose sanctions or take other meaningful actions against Russia.

Third, as experienced analyst Paul Goble writes: “There is another advantage of subversion about which less has been said: it is relatively cheap for those who engage in it. Governments who employ this strategy do not have to spend a great deal of money, and just how little is highlighted when they actually seize or annex territory when the costs go up astronomically.” Russia’s campaign to annex Crimea was cheap. The long run cost of propping it up will be high but only evident over time.

Putin’s new kind of war does not require large numbers of troops and hence limits expense. The headquarters of Russia’s Ukrainian covert operations (in Slovyansk and Kramatorsk) is purported to have thirty special forces troops or officers of Russia’s military intelligence service, the GRU. They have to compensate the self-appointed local leaders and provide walking-around-money for demonstrators, but it does not add up to much. Putin’s new kind of war offers insurrection at bargain-basement prices.

As the old saying goes, “You get what you pay for.” Putin’s New Kind of War has given him some ten cities and towns in eastern Ukraine controlled by Russian special forces and self-appointed city officials. They rain terror on non-cooperative citizens, murder political opponents, use human shields, and go so far as to threaten summary execution of those possessing Ukrainian information leaflets.

Is Putin’s new kind of war giving him the results he needs? I would argue, No!

Putin’s overarching objective is to keep a subservient Ukraine in his orbit and not as a part of Europe. A unified Europeanized Ukraine on the Russian border that has achieved the rule of law, democracy, and prosperity would prove fatal to Russia’s dysfunctional kleptocracy. Therefore, Putin feels he has no choice but to weaken Ukraine by actual or de facto dismemberment, shaving off Ukraine’s southeast either into independent entities or annexing them into Russia. Putin achieved this goal in Crimea by military force, but the Crimean peninsula is not southeastern Ukraine.

Putin’s dismemberment plan has two variants. The first is to gain enough control over southeastern Ukraine to hold sham “independence” referendums under the watchful eyes of “self defense” Kalashnikovs. Moreover, Putin must have sufficient control of southeastern Ukraine to sabotage the Ukrainian presidential election scheduled for May 25. (Read Slovyansk’s self-appointed mayor’s gutter language explaining how he will thwart the election). At this point, however, Russia does not have the necessary territorial coverage or control.

Putin cannot afford either an honest referendum (“Stay in Ukraine or not”) or a presidential election with the participation of the Party of Regions (the ousted president’s party) and reveals, according to all polls, minuscule support for the loathsome Right Sector extremists, who control Kiev according to Russian propaganda.

A series of what appear to be legitimate surveys show strong Ukrainian support for joining the European Union, but not NATO, that almost 90 percent of Ukrainians do not want to join Russia, including a large majority in the eastern heartland, and a majority of Ukraine’s easterners prefer Crimea to be a part of Ukraine.

The covert stage of Putin’s campaign against Ukraine will not give him the command and control that he needs to carry out a rigged referendum or block Ukraine’s presidential election. Moreover, there are no guarantees that the covert operation will not lose steam as Ukraine fights back in the propaganda war, as the brutality of the Russian operation becomes evident, and the credibility of Russia’s more bizarre propaganda claims are unmasked.

The world is watching now. Earlier it was not. That pro-Russian authorities are jailing reporters at the epicenter of their operations and even going so far as to kidnap international observers shows their fear of exposure of their Potemkin villages of self-defense forces and locals fearful of Kiev Nazis. These kidnappings are extreme steps by panicked Putin minions.

The greatest cost to Putin of an armed invasion (even under the guise of “peacekeeping forces”) is the loss of the fig leaf of Russian noninvolvement. An even greater cost would be the world opprobrium caused by a powerful army crushing (presumably with considerable loss of life on the Ukrainian side) a helpless enemy. World public opinion does not like asymmetric military battles — the ruthless Russian Goliath against the diminutive Ukrainian David. In this case, sanctions would be severe. Russia becomes a world pariah. Germany’s Schalke 04 would publicly tear off their Gazprom football jerseys. Russia’s participation in the Eurovision contest would be cancelled. Wealthy Russians can kiss their travel to the civilized West goodbye along with their million and billion dollar Swiss bank accounts. Russia would go into a deep recession or even depression.

Putin’s own timetable gives him only a short time to decide. His rubber-stamp Federation Council has “peacekeeping forces” on its Tuesday agenda. Putin’s operatives and surrogates in southeastern Ukraine have set the date of the “independence referendum” for May 11, and the Ukrainian presidential election is scheduled for May 25. An astute Ukrainian observer identifies the May 9 World War II victory anniversary as the ideal patriotic setting for returning (by force) New Russia back into Mother Russia’s embrace. Both May 9 and May 11 are approximately two weeks off.

Putin must decide: Is Ukraine worth this? Only he can answer. Perhaps he has not made up his mind. Maybe he is improvising as he goes along.