r“Passing a reform law is only 5% of a reform’s success,” — admit officials of the new wave. But no reform is possible without a start in the form of a law. For two years now, VoxUkraine has been monitoring and evaluating legislative changes that have taken place in our country. Based on this data, we’ve created a rating that reflects which ministries contributed most to the progress of reforms in Ukraine. Who in the government haven’t worked in vain within the past two years?

The Big Picture: Progress of Reforms in the Past Two Years. In short, the reforms slowed down, at least when it comes to legislative changes (Figure 1). The number of reform regulatory acts reduced by 35% — to 208 in 2016 from 322 in 2015. The average rate of the index for monitoring reforms (іMoRe) decreased to +0.9 points from +1.2 points in 2016 (on a scale from -5 to +5, where a negative value means regression). The index reached its peak in the first half of 2015, when Ukraine negotiated with the IMF on a new programme to increase financial support and was getting ready to receive the first tranches — back then, the average rate of іMoRe reached 1.4 points.

Figure 1. Dynamics of the Index for monitoring reforms * 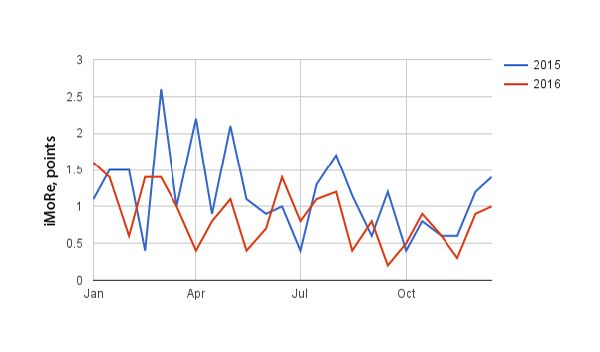 However, there have been significant changes for the better within the past two years in several areas. Since the beginning of 2015, the most significant legislative progress was observed in the anti-corruption and deregulation areas. This result reflects not only activity of the reformers, but the fact that these areas accumulated significant problems. The issue of corruption is one of the most painful in Ukraine, and the huge number of regulatory documents, which regulate business activity, is a huge problem for private companies. That’s why it’s heartening to see progress in these areas. However, it doesn’t mean that most of the problems have been solved. Significant positive changes also took place in the banking legislation, energy sector, and public sector. 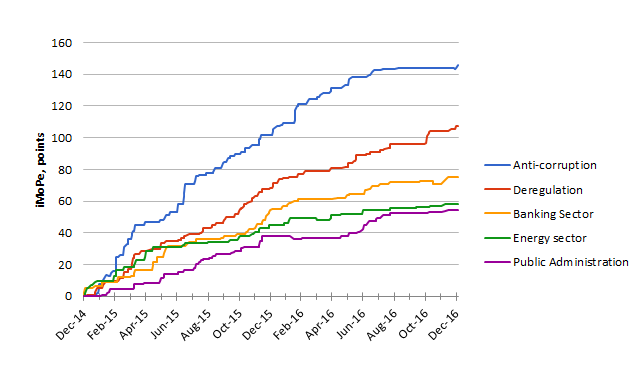 * Index value for each date in a chosen area is the sum of ratings of all regulatory acts that affect this area and have been approved since the start of the monitoring (January 2015) until now. Areas with less reforms are not reflected in the diagram, but readers can create similar figures themselves using index data.

The Cabinet of Ministers was the most active initiator of economic reforms among the authorities (see a detailed analysis here). This is not surprising, since the Government (in coordination with the National Bank) pursues economic policy of the state and must perform tasks of the parliamentary coalition that appointed him.

The Cabinet of Ministers initiated most positive legislative changes almost in all areas, which saw significant changes. Except for the banking sector, which is the concern of the National Bank (even though the National Bank has no right of legislative initiative, its experts drafted some of the laws), and the fight against corruption: the Parliament and the President made a significant contribution to the anti-corruption legislation.

Figure 3. Contribution by the authorities to reforms in Top 5 areas 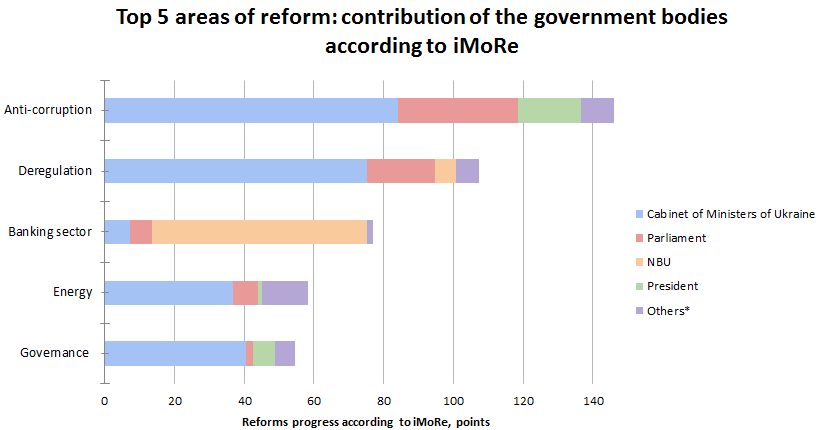 Rating of the Ministries

The Ministry of Economic Development and Trade topped the rating of the ministries related to economic policy. This Ministry actively initiated draft laws and regulations, which had a positive impact on the process of deregulation, fight against corruption, liberalisation of foreign trade, and reform of public procurement.

The Ministry of Finance ranked as the second best. It initiated a lot of anti-corruption regulatory acts, and it also contributed to the reforms of the tax system, social security system, and public spending.

The Ministry of Justice made it to the third place in the rating. It made a significant contribution to the anti-corruption, deregulation, and public service reforms.

Table 1. іМоRе rating of the ministries 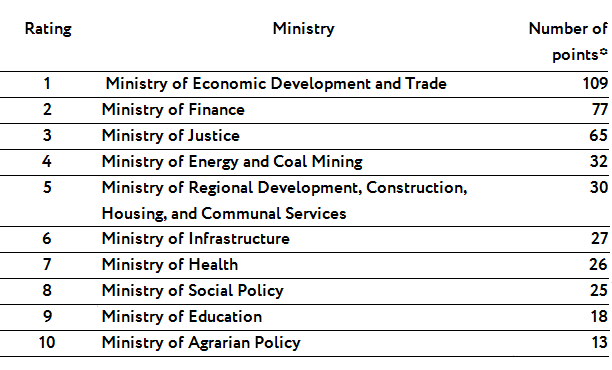 Source: http://imorevox.org, Cabinet of Ministers, calculations of the authors.

* The number of points was calculated as the sum of іMoRe estimates for reform regulations initiated by the ministry (see. the text box). The rating includes ministries related to the economy.

How We Calculated the Rating

іMoRe-rating of the ministries reflects their reform activities. The experts assess every reform regulatory act. Evaluation of the ministries in the іMoRe rating is the sum of points received by all reform regulatory acts, initiated by this Ministry. We received the information about the initiators of the draft laws from the explanatory notes on the Verkhovna Rada website, and the data on the initiators of regulations and orders — through official requests to the Cabinet of Ministers. The information about the authority that issued the order is mentioned in the order’s details.

Methodological limitations of the rating:

The іMoRe-rating shows contribution of the ministries into the economy-related reforms, but it cannot be considered a comprehensive assessment of a ministry’s work. Also, we deliberately didn’t calculate the rating for each government, since the process of preparing legislative changes and approving them may take months. Quite often initiatives, initiated by one team, become a law or a regulation when another person heads the ministry.

What Exactly the Ministries Did

The Cabinet of Ministers showed the greatest progress in the anti-corruption, deregulation, energy, and public service reforms.

1. Ministry of Economic Development and Trade

This Ministry gained 109 points — the highest rating among all ministries. Among the best initiatives of the Ministry there are, undoubtedly, public procurement (implementation of ProZorro) and ratification of the WTO’s revised Agreement on Government Procurement. Moreover, the Ministry received high points for energy (increase of gas tariffs and corporate governance reform of “Naftogaz”). The experts also highly praised governance reform of state-owned enterprises, as well as deregulation laws and orders. In addition, one of the first (and highest evaluated) was the Ministry’s decision to dissolve “Ukrekoresursy” (State Enterprise for Managing Waste as Secondary Raw Materials). The Ministry also proposed an “antireform” — the 2016 decision to increase the number of state-funded programs in universities. 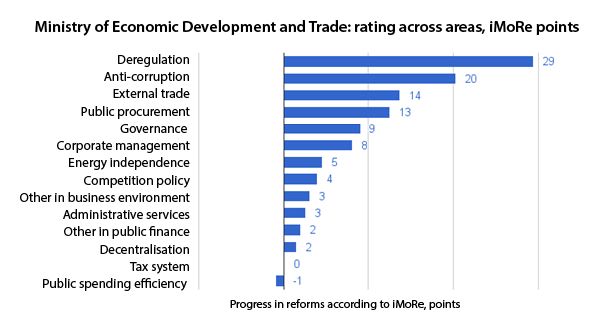 This Ministry came second with 77 points. The Ministry’s top reform was implementation of the single window system at the customs. Experts also highly praised regulatory acts implementing social welfare verification, changes to the Tax Code of Ukraine on improving the investment climate, restructuring of the external public debt, determining appointment procedures of supervisory boards of state-owned banks, and reducing the number of tax inspections by 50%.

There were also anti-reforms. The experts evaluated negatively certain provisions of the 2015 State Budget of Ukraine, establishment of common indicators of the customs value of goods in September 2015, which was annulled a year later, and setting salaries of the heads of executive authorities at a fixed level (also annulled later). 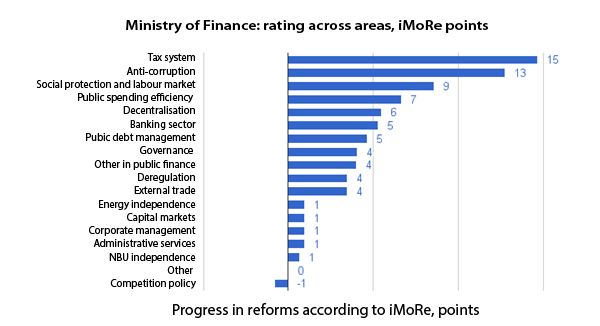 65 points. The majority of this Ministry’s reforms were related to “anti-corruption” (20 points) and “deregulation” (11 points). Among the regulatory acts initiated by the Ministry the experts highly rated amendments to the law on joint stock companies that allowed the government to hold a shareholders’ meeting and receive dividends from “Ukrnafta”. In addition, the Ministry of Justice has simplified business operations by introducing electronic format (online service, access to some registries, equating legal effect of real estate electronic and paper documents, etc.). Other important steps were dissolution of the State Enforcement Service of Ukraine and introduction of the institute of private judicial executors. 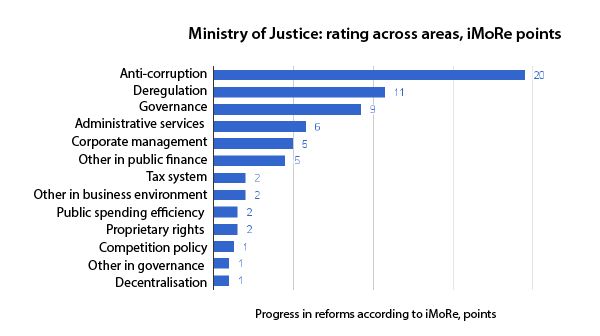 4. Ministry of Energy and Coal Mining

Received 32 points. The Ministry’s key initiatives focused on the energy supply security and gas market reform. In particular, the Law on Natural Gas Market, developed in cooperation with the Ministry, was recognised as fully compliant with the European Union’s Third Energy Package. It became the first step towards liberalisation of the gas market and creation of competitive conditions among suppliers. The next step was adoption of the Naftogaz Ukraine unbundling plan, which envisages unbundling of the gas transmission and storage operations. Gas production will remain under the control of Naftogaz. It will also function as a trader, retaining its competitive edge in the market.

Got 31 points, mostly for deregulation (8) and decentralisation (6). The “Open Data” initiative got the highest rating. However, not all the data is in a convenient format. Energy became the second most prominent area of the Ministry’s activity. In particular, it adopted the law on single tariff in the sphere of housing and communal services from the IMF package and approved the Energy Efficiency Action Plan through to 2020. Finally, the Ministry adopted several regulatory acts on decentralisation and deregulation of architectural and construction activities.

The Ministry of Infrastructure got 27 points for the changes in the “anti-corruption” (6), “deregulation” (6), “public procurement” (5), and “public service” (4) areas.

Among the key decisions there were the decision (+5.3 points) to disclose information about procurement of all subordinate enterprises, as well as the order (+4.5 points) to the industry state enterprises and administrations to carry out all tender purchases broadcasting the procedure of choosing the winner online. In addition, the Ministry introduced several changes in the management of roads, railways, and sea ports, and adapted the rules of protection of inland surface waters from pollution to the international standards. 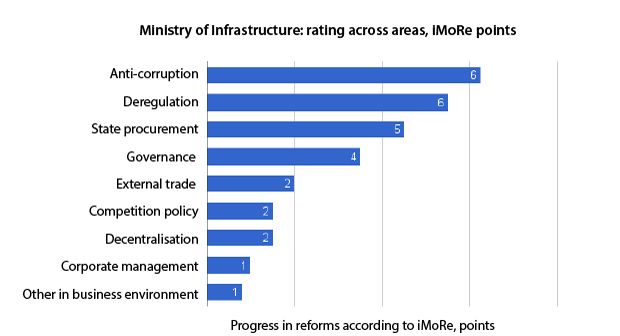 The Ministry of Health received 26 points for changes in the “anti-corruption” (6) and “deregulation” (6) areas. The most outstanding decision of the Ministry is, of course, transfer of a part of medicine procurements to international organisations, which significantly reduced corruption possibilities in the industry. A significant deregulation step was cancellation of compulsory re-registration of medicines. In addition, over the past two years the Ministry improved the order of distribution of medical subventions among health care institutions.

Seven of the 24 regulatory acts, initiated by the Ministry, related to various aspects of “energy” subsidies. Among other important changes there were enabling employees of local government bodies to receive additional salary from the local budgets, reduction of the list of early retirement professions, as well as the decision to create a single registry of displaced persons and introduce a new order of social payments.

The most important reforms, initiated by this Ministry, were aimed at improving the quality of education — creation of the National Repository of Academic Texts and introduction of a competitive procedure of appointment of head teachers (principals) in schools. Moreover, creation of a single database of school students, students, and graduates will help avoid “fake degree scandals”. And, of course, we cannot ignore adoption of the law on science and scientific work. 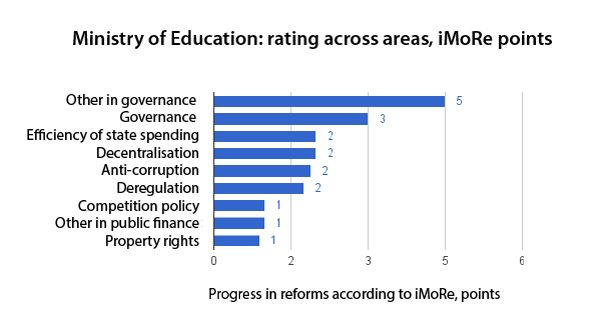 Elimination of a state monopoly on the production of bioethanol got the highest score. Other reform decisions of the Ministry concerned mainly deregulation of farmers’ activities. In addition, detailed rules on organic production were approved.