IMF’s program in Ukraine: How to create a new Greece

More information came in about the deal between the IMF and the new government in Ukraine. While some conditions (e.g., switch […] 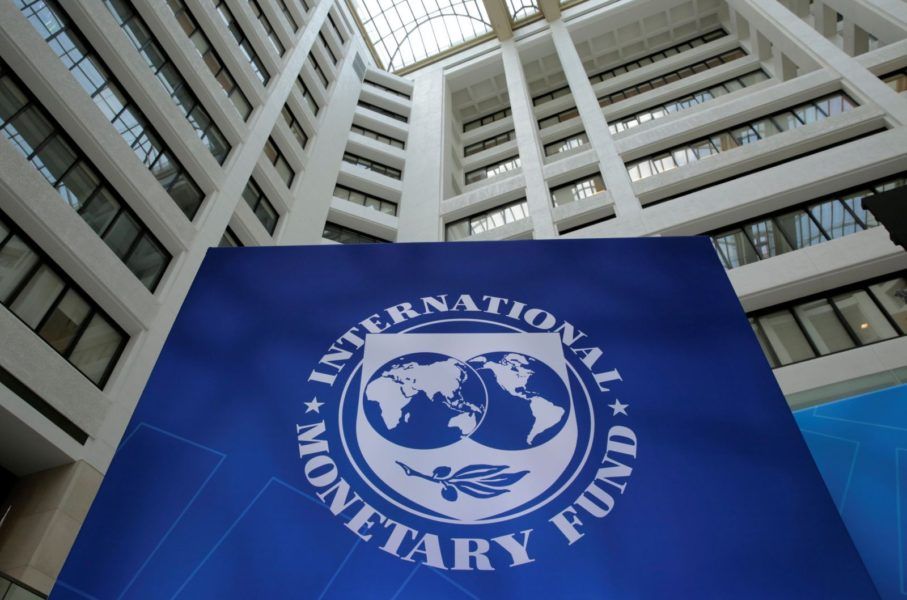 More information came in about the deal between the IMF and the new government in Ukraine. While some conditions (e.g., switch hryvnya (Ukraine’s currency) to a floating exchange rate regime and depreciate to correct external imbalances) appear reasonable, others appear to be surprising given the experience of the Great Recession.

Specifically, the fiscal position of the government in Ukraine is weak with a deficit of 5 to 9 percent of GDP—the exact magnitude depends on how one treats “off-balance sheet” liabilities (e.g. state owned enterprises). Clearly, a fiscal consolidation is needed. The IMF demanded that the government raise taxes (about 2 percent of GDP), cut spending (about 3 percent of GDP), remove energy subsidies to population (1 percent of GDP), and freeze minimum wages. The government agreed to raise energy prices charged by utilities by 50 percent starting May 1, 2014. The program envisions a gradual expenditure-led fiscal adjustment—proceeding at a pace commensurate with the speed of economic recovery and protecting the vulnerable—aiming to reduce the fiscal deficit to around 2½ percent of GDP by 2016. In short, the IMF wants Ukraine to implement a massive, front-loaded fiscal contraction.

This is a bad idea. First, many commentators observed a strong negative correlation between fiscal consolidation and GDP growth in Eurozone countries during the Great Recession (see Figure 1). While the IMF demonstrated more flexibility with respect to fiscal reforms in these countries, it was still far too aggressive on forcing countries to keep balanced budgets. PIGS countries had to implement large fiscal consolidation, they had deep recessions, and even now they have weak economic growth. 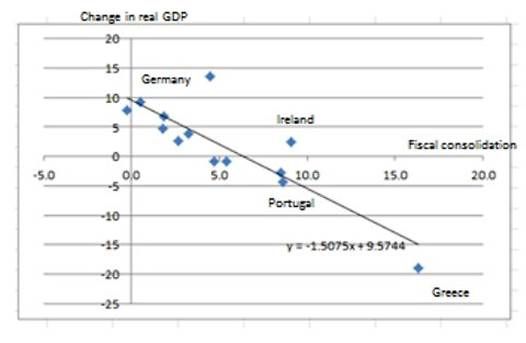 Second, recent research has converged on the consensus that fiscal multipliers may be particularly large during recessions ([1], [2<]) and financial crises ([3]) so that fiscal consolidations could be particularly painful when economies are weak. Even IMF economists acknowledge that fiscal multipliers could be larger than the IMF thought. That is, the IMF consistently underestimated the negative effects of fiscal contraction during the Great Recession (see Figure 2). Olivier Blanchard, the chief economist of the IMF,  argues that the timing for fiscal consolidation should be “less now, more later.” In other words, fiscal consolidation should be done when economies are doing well rather than when they are depressed. 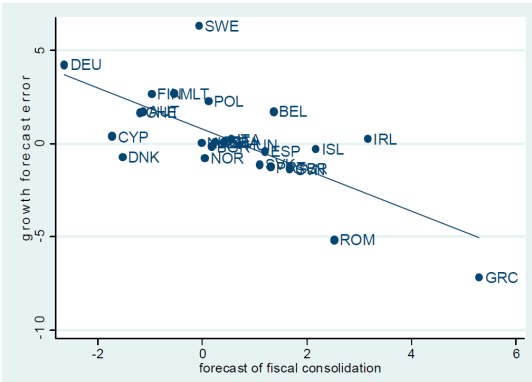 Figure plots forecast error for real GDP growth in 2010 and 2011 relative to forecasts made in the spring of 2010 on forecasts of fiscal consolidation for 2010 and 2011 made in spring of year 2010; and regression line (available at www.imf.org)

One may argue that fiscal consolidations should be front-loaded because i) a crisis may be the only time when politicians can do reforms, ii) a fiscal consolidation may restore confidence and resume economic growth, iii) fiscal consolidation could be the only feasible option to balance the budget. While these could be good arguments, I believe that none of them applies to Ukraine: i) Ukraine is going to implement wide-ranging reform as a part of its association agreement with the EU anyway; ii) given a very low income per capita, Ukraine is likely to grow fast in the medium run (fighting corruption is by far more important in restoring confidence); iii) many countries committed to loan vast resources to Ukraine and so it can weather short-run difficulties.

In summary, fiscal consolidations in weak economic conditions could be a kiss of death. One could have expected that the IMF is going to learn from its mistakes but the program between the IMF and Ukraine suggests otherwise. At this rate, the IMF can turn Ukraine into Greece, a country with deep and prolonged economic contraction and continued political instability. Is this what the IMF wants to achieve?