When Ukraine and the EU sign a free trade agreement, the role of trade with Russia is going to diminish since the EU is a much larger market 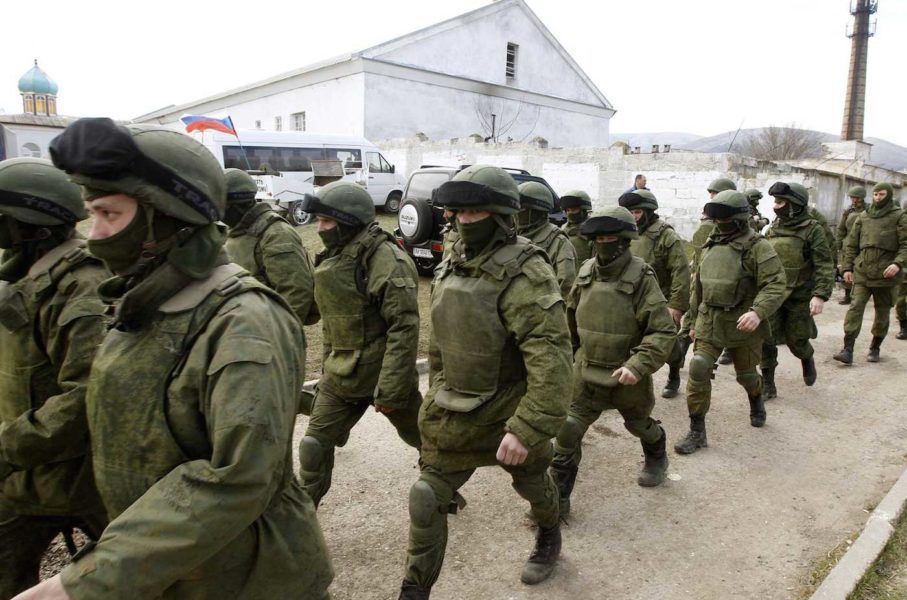 After the Russian annexation of Ukraine’s Crimea, the relationship between Ukraine and Russia is a historical low. There is a significant chance of a full-scale war between countries if Russia invades other parts of Ukraine. However, a more likely scenario is a trade war between the countries. It is not likely that anybody is going to win this war since the economies of Ukraine and Russia are highly integrated but the sectoral exposure to trade varies considerably and thus the pinch will be distributed unevenly.

Figure 1 shows the distribution of Ukraine’s trade with Russia by sector. Each circle is a sector, and the size of the circle indicates the relative importance of a sector in imports from Russia (larger circles correspond to a larger volume of trade). In a nutshell, Figure 1 shows that Ukraine imports energy from Russia and exports food, chemical and machines to Russia. There is only a handful of industries with roughly equal flows of goods in both directions (that is, circles are close to the 45-degree line). This pattern of trade is consistent with the notion that the trade is dominated by comparative advantage rather than monopolistic competition or economies of scale. Thus, if Russia decides to cut energy supplies to Ukraine, it’s likely to end up paying more for food and other goods supplied from Ukraine to Russia and thus the welfare of Russia’s consumers will be reduced.

Figure 1. Composition of trade with Russia, 2012 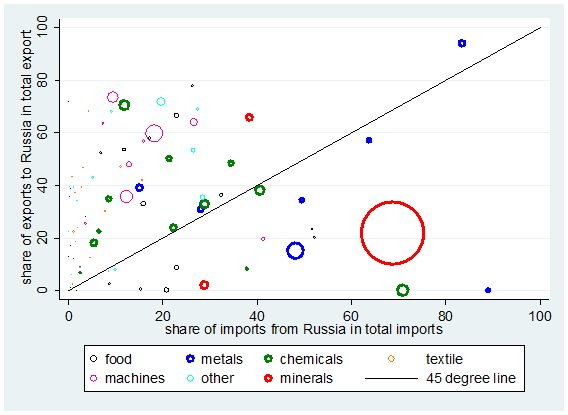 The cost of a trade war with Russia depends on how easily Ukraine can redirect its trade to other destinations. One can reason that if a good is supplied almost exclusively to Russia, it has not established market in other countries and hence redirecting trade flows may be difficult. On the other hand, if a good is shipped to many countries and Russia has only a modest share in trade, shifting exports to other countries could be easier. To illustrate the concentration of Ukraine’s trade with Russia, Figure 2 plots the shares of exports to Russia and Europe by sector. Again, each circle corresponds to a sector and the size of the sector indicates the volume of trade. If a circle is close to the “100 percent” line, it means that Europe and Russia cover close to 100 percent of exports for a given sector. Several patterns are present in Figure 2. First, for most industries, exports go to many destinations other than Europe and Russia. For example, metals—the main export sector in Ukraine—sends only a half of its exports to Russia and Europe. Second, while there is some sectoral concentration of trade directed to Russia, many industries are fairly diversified. For example, sectors in the food segment have large exports to both Russia and Europe.

Figure 2. Shares of Ukraine’s exports to Russia and Europe, 2012 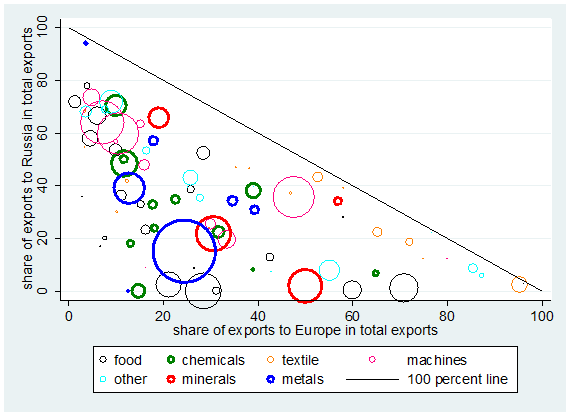 In summary, trade between Russia and Ukraine is good for both countries. If Russia tries to exploit the “oil/gas” argument to pressure Ukraine in a trade war, the outcome is likely to be costly for Russia too: Ukrainian exports will end up charging higher prices to Russian consumers and redirecting their trade to other countries. When Ukraine and the EU sign a free trade agreement (the EU promises to do it after the presidential elections on May 25th, 2014), the role of trade with Russia is going to diminish since the EU is a much larger market, and Ukraine’s comparative advantage is likely to be even stronger in the Ukraine-EU trade than it is in the Ukraine-Russia trade. By starting a trade war now, Russia will only speed up this process.