The economic cost of annexing Crimea

Today the military annexation of Ukraine’s Autonomous Republic of Crimea is now officially complete, as President Putin has just signed into laws the respective bills passed by Russian parliament this week.

Most of the civilized world has effectively condemned the unlawful and illegitimate referendum in Crimea that “formed” the basis for annexation, as evidenced by the draft UN Security Council resolution #S/2014/189 that was blocked and vetoed by Russia.

It became crystal clear that from now on Russia would only regard the application of brute force and power in international relations. Therefore, major countries and blocs of the civilized world – the U.S., Canada, European Union, Japan, Australia and others – moved ahead with sanctions against Russia that included travel bans and asset freezes for Russian officials and their closest aides and related business entities. So far the strongest were the sanctions imposed by the U.S Department of Treasury as they saddled the global commodity trader Gunvor, controlled by Putin’s close friend, and Bank Rossiya, the personal bank of senior officials of Russian Federation. Any assets of designated persons that are within the U.S. jurisdiction must be frozen. In addition, transactions by the U.S. persons or within the United States involving these individuals and entity designated are generally prohibited.

If the civilized world were to introduce further sanctions imposing economic costs in direct response to Russia’s acts shaking the post-WWII world order and undermining international law, the measures could include partial embargo on Russia’s exports of crude oil. The easiest export routes to target would be the crude oil supplies by the tanker fleet via Bosporus strait and the pipeline exports to Europe through Ukraine. 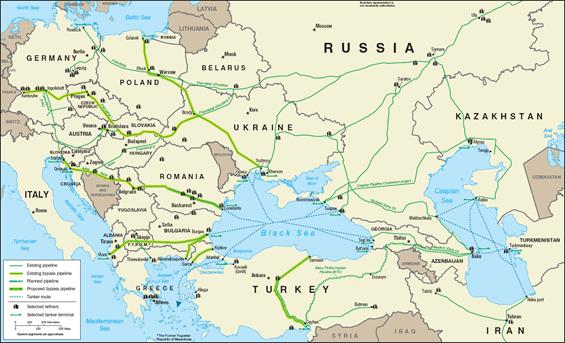 As seen in the map above, two major oil pipelines – “Druzhba” and “Pridneprovsky” – pass from Russia through the territory of Ukraine to Europe and major exports by tanker fleet goes via ports in Black Sea and further via Bosphorus strait. Some estimates suggest that if these routes are blocked, then about 45 percent of Russia’s projected “far abroad” export sales of crude oil in 2014 will be affected.

The Russia’s share in total world crude oil exports amounting to about 11 percent is big and is second highest after Saudi Arabia’s. However, European countries – the biggest export destination for Russian crude – would be able to withstand the disruption shock and replenish oil supplies from other sources with idle capacity such as Saudi Arabia, Libya and potentially Iran.

The partial embargo may drive up the oil price by 10-15 percent, but these effects will be temporary and will dissipate as other oil exporting countries step up production and exports and as Russia will shift some of the export supplies to the ports in the Baltic Sea (Primorsk, Ust’-Luga) and Pacific (Koz’mino). 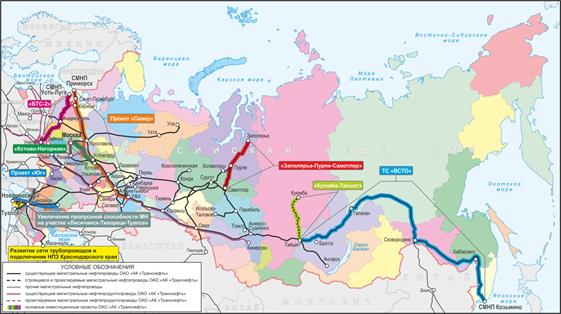 The economic consequences of the embargo-type sanctions on Russia would be dire for Russia. In addition to the massive outflow of private capital (estimated to accelerate to US$ 50 billion per quarter), stock market collapse, huge depreciation pressure on ruble and loss of international reserves associated with CBR resisting the pressure, the annual permanent loss of crude oil export earnings can be estimated to total US$ 79.1 billion, or 3.4 percent of GDP. The 2014 projected current account would turn around from surplus of +1.5 to a deficit of -1.9 percent of GDP. The economy is likely to slide to a recession (-1 percent in 2014) against sharply negative contribution from net exports and subdued investment spending held back by eroded business confidence and heightened uncertainty in the corporate sector. The fiscal balance of general government will worsen and that would weigh on government spending. If the authorities were to respond with aggressive monetary and fiscal stimuli to compensate for the loss of external demand and support growth, these policies can help in the short run but will quickly lead to an erosion of fiscal and external positions. For example, just one year of sustained capital flight and reduced crude oil export earnings would cost Russian economy a hefty 50 percent of gross international reserves. The structural shortage of foreign exchange would require either substantial exchange rate correction (that would bankrupt half of the corporate sector exposed to US$ 700+ billion in external debt overhang) or capital controls and tight foreign exchange restrictions of the type that existed in the former Soviet Union. Multi-year sanctions can plunge the Russian economy into a deep recession.

One can only hope that the Russian government appreciates how serious economic consequences of sanctions can be in case it chooses to continue the occupation of Crimea and further escalation of the crisis.