What is the status of Crimea? 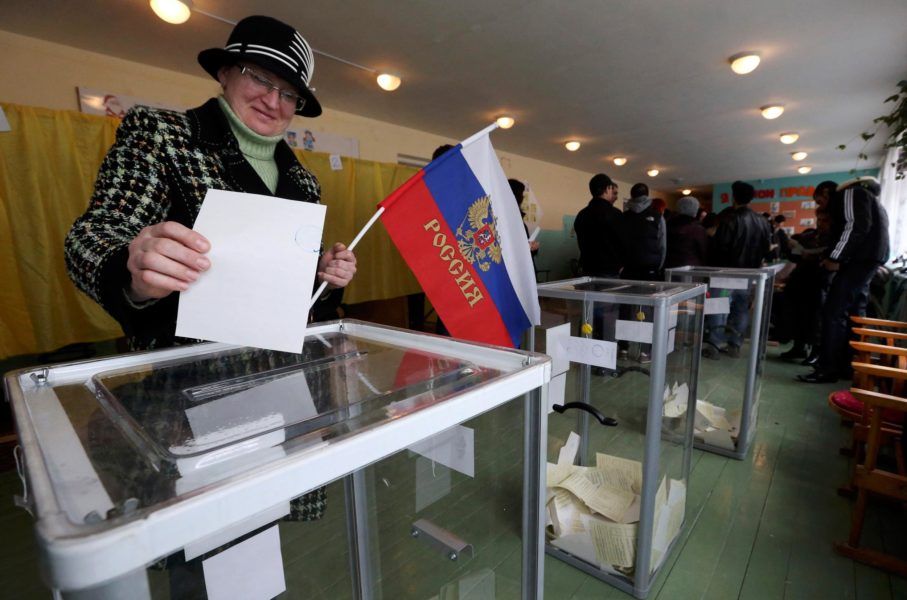 On March 18, 2014 Vladimir Putin in his address to the Federal Assembly stated that Crimea’s referendum was consistent with international law and constituted an exercise of the right for self-determination. In line with this contention, Putin relied on Kosovo’s declaration of independence from Serbia.

“Our western partners created the Kosovo precedent with their own hands. In a situation absolutely the same as the one in Crimea they recognized Kosovo’s secession from Serbia legitimate while arguing that no permission from a country’s central authority for a unilateral declaration of independence is necessary. […] That’s what they [western partners and International Court of Justice] wrote, that what they trumpeted all over the world, coerced everyone into it – and now they are complaining. Why is that?”

Then he proceeded his argument with potpourri of the cases when “western partners” behaved profoundly wrong, including Yugoslavia, Libya, Afghanistan, Iraq and wrapped it up with Arab Spring “yielding Arab winter” and “colored revolutions” in Europe. Basically, every ambiguous issue in international law was brought up in several minutes. Although there are many points to discuss here, I will focus on the main message and examine the credibility of self-determination claim. 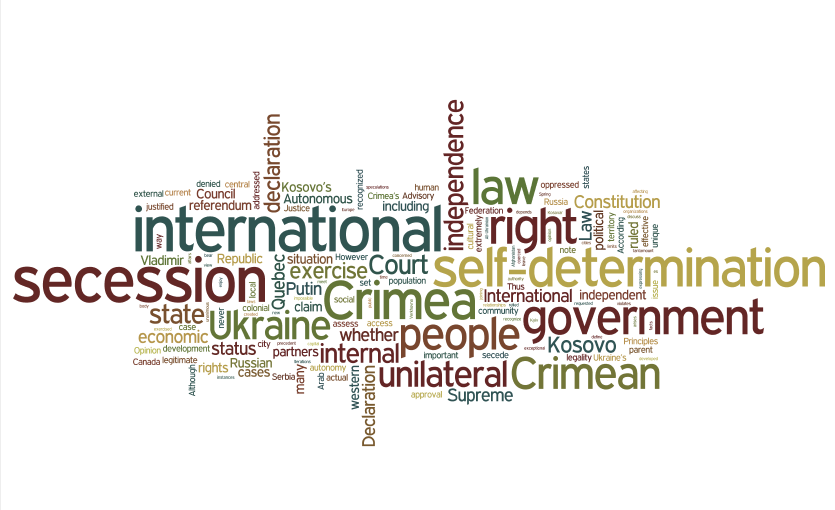 1. What is “Right to Self-Determination” and how is it different from unilateral secession?

The right of a people to self-determination is widely recognized in the UN Charter, international conventions (Declaration on Principles of International Law, Declaration on the Granting of Independence to Colonial Countries and Peoples, ICCPR, ICESCR) and is considered a general principle of international law (Cassese; Doehring, Simma). This right is normally fulfilled through internal or external self-determination. The latter is tantamount to unilateral secession and arises exceptionally in the most extreme cases, while internal self-determination constitutes pursuit of political, economic, social and cultural development by people within the framework of existing states. Thus, Vladimir Putin’s claim transforms from “Crimean exercise of the right to self-determination” to “legality of Crimean unilateral secession”. One should also bear in mind that such unilateral secession becomes even more unique in the light to immediate Crimea’s accession to the Russian Federation (unanimously approved by the Russian Constitutional Court in a single day).

2. When unilateral secession is justified under international law?

According to the Declaration on Principles of International Law and the Vienna Declaration and Programme, secession is deemed justified in cases when it is exercised by people “under colonial or other forms of alien domination or foreign occupation” and/or is set by the Constitution (or applicable national law) of the parent state concerned. However, article 73 of the Constitution of Ukraine stipulates that “[a]lterations to the territory of Ukraine shall be resolved exclusively by the All-Ukrainian referendum.” Therefore, neither of aforementioned provisions applies.

Although instances of unilateral secession are extremely rare, international legal practice developed the set of alternative criteria, which, if satisfied cumulatively, render the secession legitimate. The right to self-determination enables a “people” (1) to secede if the parent state seriously violates their human rights and (2) makes impossible or limits exercise of the right to internal self-determination (3) while there are no other effective remedies under either domestic law or international law.

The Supreme Court of Canada in its Advisory Opinion on the secession of Quebec ruled that Quebec “does not meet the threshold of a colonial people or an oppressed people” and has not “been denied meaningful access to government to pursue their political, economic, cultural and social development” and in such circumstances “do[es] not enjoy a right at international law to effect the secession of Quebec from Canada unilaterally.” Thus, the Supreme Court ruled out the possibility of unilateral secession when people of Quebec could fully exercise their right of internal self-determination.

The more intricate situation evolved in the case of Kosovo, addressed by Vladimir Putin. Indeed, the International Court of Justice ruled in Advisory Opinion on the legality of Kosovo’s declaration of independence that international law does not prevent Kosovo from declaring its independence. However, the Court specifically underlined that opinion was given not on the issue whether Kosovo had “a right” to secede, but rather whether the proclamation of independence was conducted in a lawful way (more of assessment of the situation post factum). Thereby, this decision marked the crucial difference between declaration of independence and actual “being an independent state”, which depends on recognition by the international community. In this respect, it is important to note that the Russian Federation does not recognize Kosovo as independent state, while expressing eagerness to accept Crimea as an integral part of its sovereign territory.

Since declaration is not a self-sufficient requirement in international law, in order to define the legitimacy of secession in Crimea it is important to assess whether “people” of Crimea were oppressed by government, discriminated, denied an access to government and subjected to human rights violations (as it was the case with persecution of Kosovar Albanians) and to assess the response of international community.

3. What is the status of Crimea?

First of all, I would prefer to leave aside a question of whether Crimean population satisfies the extremely vague definition of “people” under international law and avoid speculations while proving or undermining the fact that people in Crimea have formed a distinct identity under the rule of the USSR, Russia or Ukraine. The only note to make here is to say that almost unanimous (97%) vote in support of joining Russia does not by itself demonstrate the actual view of the local population since many citizens opposing the merge boycotted the referendum (after it was condemned by Ukraine’s government) and many of them have already escaped from peninsula due to the persecutions.

Under the Constitution of Ukraine, Crimea has a unique status of an autonomous parliamentary republic in a unitary state and is governed by its own Constitution in accordance with the laws of Ukraine. The capital of the republic’s government is the city of Simferopol. Another Crimean city, Sevastopol, along with Kyiv enjoys the special status: both cities are simultaneously units of public administration and local government. Crimean legislative body is the Supreme Council of Crimea, which has 100 seats. It appoints the Council of Ministers, headed by a the Chairman, whose candidacy is suggested by the Speaker of the Verkhovna Rada of Crimea (Crimean parliament) with the approval of the President of Ukraine and subsequent approval of the Crimean Supreme Council. According to Article 9 of the Law of the Law of Ukraine “On the Autonomous Republic of Crimea” the Autonomous Republic of Crimea “should be involved in the formation and implementation of internal and external economic affairs of Ukraine on matters affecting the interests of the Autonomous Republic” and should enter into relationships with government of other states and international organizations in the questions of economy, environment and culture. During 22 years of Ukraine’s existence as an independent state (including 3 rebellious months of “EuroMaidan” revolution) the Crimean government has never requested broadening Crimean’s autonomy. There are no facts identifying that the new government is willing to diminish or limit current exceptional status of Crimea, deprive it of autonomy or in any other way obstruct effective exercise of political, civil and economic rights, including right to internal self-determination. The current self-proclaimed Crimean government as well as its predecessor has never addressed the central government in Ukraine with complaints and evidence of limitation of a right for self-determination. Peculiarly, we hear this claim for the first time from Putin.

Finally, international community was more than clear: Russia is the only nation to recognize the Crimean referendum due to the abstention of China during the vote in UN Security Council on a draft resolution condemning an upcoming referendum.

From all the reasons mentioned above it follows that unilateral secession of Autonomous Republic of Crimea may not be justified under applicable international law since (1) people of Crimea  were never denied the right to exercise their right to self-determination trough internal self determination, were granted access to government and enjoyed a broad autonomy; (2) violated the Constitutional procedure on carrying out referendum on the matters related to the territorial integrity of Ukraine (and thereby did not exhaust this remedy); (3) were not recognized by international community as an independent state.