A Handful of Optimism: the I quarter of 2018 witnesses a slightly faster pace of reforms | VoxUkraine

A Handful of Optimism: the I quarter of 2018 witnesses a slightly faster pace of reforms

On a regular basis, VoxUkraine measures the pace of the economic reforms in Ukraine. The quarterly reviews allow you to get a bird’s-eye view of the changes that took place throughout three months. Here is the I quarter of 2018 review of reforms. To read the previous reviews, please follow this link.

In the previous quarter, the index for iMoRe was +0.7 points. 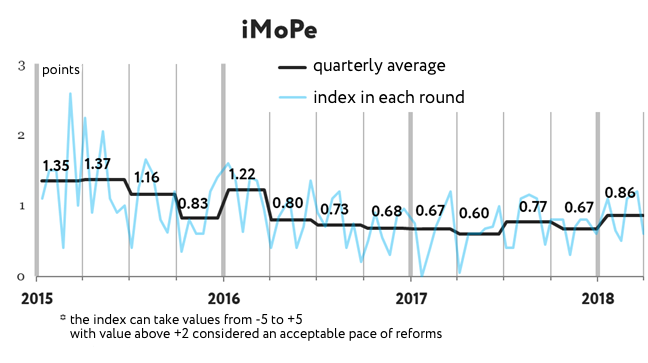 In a nutshell: just numbers

In the I quarter, 19 regulatory acts promoting reforms were passed. The average value of these reformist documents by iMoRe was +1.5 points (in the previous quarter 36 regulatory acts were passed with the average value +1.2 points), i.e. regardless their decreasing number their quality increased to some extent. On the average, laws have made 37% of the regulatory acts since the beginning of the measurement (2015-2017), with their value equaling to +1.7 points. As before, the most active change initiators were the Cabinet of Ministers of Ukraine and the NBU.

In 2014, the Organization for Economic Cooperation and Development (OECD) that has 35 member countries with strong economies, developed Guidelines on Corporate Governance of State-Owned Enterprises. According to the Guidelines, the state should shape and publicize the policy of corporate governance of state-owned enterprises justifying a purpose for owning each of the enterprises. For example, such purpose might include making a profit or carrying out a particular social mission.

However, in previous years there were some reforms implemented in the corporate governance of state-owned enterprises. They included the introduction of new governance mechanisms and the institution of independent supervisory boards, developing of the concept of state ownership reform, and setting up governing bodies in some individual enterprises in accordance with the OECD recommendations. Within the reform of state-owned enterprises, a so-called triage was carried out, i.e. it was defined which of the enterprises should remain state-owned, and which ones should be granted to a concession, privatized or liquidated. However, under current legislation, transparent and quick privatization, especially for small and medium-sized enterprises, would face some obstacles.

The I quarter of 2018 marked a number of developments in this sector, including the adoption of the law on privatization and defining new rules for the appointment of heads and independent supervisory boards of large state-owned enterprises. These changes were initiated by the Ministry of Economic Development and Trade of Ukraine.

The I quarter of 2018 marked a number of developments in this sector, including the adoption of the law on privatization and defining new rules for the appointment of heads and independent supervisory boards of large state-owned enterprises. These changes were initiated by the Ministry of Economic Development and Trade of Ukraine.

The law on privatization is another attempt to launch a “big privatization”. For the past three years, the state budget estimates of proceeds from privatization were UAH 17 billion, however, such a plan was never realized by more than 5%. The situation may change due to the adoption of the new law, but it depends much on whether there is the political will to implement it. The most tangible changes will take place in the privatization of small enterprises, which will be up for open auction Prozorro. Sale. Enterprises with assets of UAH 250+ million will gain the opportunity to apply the international law for sales and purchase agreement by 2021, and the evaluation procedures will become more transparent.

New rules for the appointment of heads and independent supervisory boards of large state-owned enterprises have changed the decision-making procedure. Previously, the selection, except for the last stage, would be carried out by the Competition Commissions under the relevant ministries. At the final stage, the Cabinet of Ministers would take the final decision. From now on, the pre-selection will be carried out by the Nomination Committee. It will determine the criteria for selecting candidates and engage professional headhunters into the selection procedure. As before, the final decision will be made by the Cabinet of Ministers.

The I quarter of 2018 witnessed a number of developments aimed at making the banking sector more transparent. From now on, bank clients will be able to receive detailed information about the activity of banks on both their websites and the NBU’s website. On the other hand, the law on the Credit Register of the National Bank of Ukraine will allow banks to receive more information about their clients’ debts.

A resolution of the NBU on increasing the amount of mandatory disclosure of information is necessary for making the activities of banks more transparent for clients. Within the framework of prudential supervision, banks provide the NBU with information on their activities. However, previously bank customers did not have access to such data and therefore often could not properly assess risks of investing money in some particular bank. According to the new rules, data on economic standards, components of regulatory capital, volume of granted loans, etc. in terms of individual banks will be published on the NBU’s website on a monthly basis. Banks have also started publishing this information on their websites.

The law on the Credit Register of the NBU addresses the issue of incomplete data on borrowers’ credit history banks can access. Banks will have more opportunities to assess the risks of giving a loan to particular borrowers, being aware of their open commitment to other banks and also whether they reimbursed a loan on time previously. Banks have already accumulated such information. There are also a few private bureaus of credit history However, the information sharing was not well set up, that’s why banks did not always have a broad picture of the borrowers’ credit histories. At the same time, previously there was a problem with access to such data for borrowers. Borrowers often have no idea of what kind of their information is included into credit registers and have no access to it.

Ukrainian legislation allows establishing public and private joint-stock companies, limited liability companies, and additional liability companies. However, the rules for establishing and managing such companies used to be controversial, belated and largely inconsistent with international practice. The stock exchanges functioned according to special rules which differed from the norms the global investors were used to. Only joint-stock companies were able to conclude corporate agreements, while this tool was hardly used in practice. This made a significant obstacle for foreign investors and additionally encouraged Ukrainian company owners to use offshore schemes.

The Law on Securities Issuers addresses a number of issues related to the low transparency of public joint stock companies for investors. From now on, foreign investors have clear rules for a stock-exchange introduction and a public offer. Companies whose shares are not quoted on the stock exchanges will be subject to simplified disclosure requirements. From now on, the rules and procedures for issuing securities and disclosure requirements will comply with European principles of regulation of joint stock companies (1, 2, 3, 4, 5, 6). Over time, this will make Ukrainian companies more attractive to investors.

The Corporate Agreements Law regulates the use of this tool by joint-stock companies and introduces it for limited liability companies. Corporate agreements can be concluded to define “rules of the game” for shareholders or company founders. Corporate agreements can be concluded by company owners additionally to constitutional documents (a Charter or a founding agreement). Corporate agreements may establish owners’ rights and duties concerning important issues of company management; conditions in which the parties have an obligation to approve the acquisition or disposal of participatory interest or shares in a company; and a dispute resolution procedure between owners, etc.

The adopted regulations substantially change the rules of the game in the corporate sector, however, the progress of reforms will largely depend on their implementation. The upcoming elections may negatively affect the adoption of complex decisions necessary to promote reforms. Reforming state-owned enterprises has been long waiting for real steps towards their corporatization and privatization.

The Law On Limited Liability Companies and Additional Liability Companies introduces the guarantees to access the financial documents of the companies for the LLC shareholders, the procedure of the shareholder withdrawal from LLC, the possibility to establish a Supervisory Board, the possibility of transferring a company share by deed of conveyance without amending the Charter or participation of other shareholders.

The adopted regulations substantially change the rules of the game in the corporate sector, however, the progress of reforms will largely depend on their implementation. The upcoming elections may negatively affect the adoption of complex decisions necessary to promote reforms. Reforming state-owned enterprises has been long waiting for real steps towards their corporatization and privatization.

In general, this year’s agenda includes creating a land market, implementing health care and education reforms, keeping up with reforms in the energy and justice sectors, including the creation of anti-corruption court that is crucial for further cooperation with the IMF and other international investors.