About the protests – according to the propaganda manual. How pro-Russian media in Ukraine wrote about Kazakhstan

About the protests – according to the propaganda manual. How pro-Russian media in Ukraine wrote about Kazakhstan

Protests in Kazakhstan are the focus of the whole world. The lack of unbiased information immediately led to manipulation by stakeholders. For example, the Russian media write about anti-government protests in Kazakhstan according to the methodology that Russia takes out in the case of rallies against authoritarianism around the world. The “gold standard” of Russian propaganda about protests consists of 5 elements:

These elements have been used at various times in protests in Venezuela, Hong Kong, Ukraine, Belarus, and now Kazakhstan. The pro-Russian media are now spreading the same or very similar narratives in Ukraine. Not all of the theses mentioned below are misinformation. However, these narratives are in tune with the propaganda campaigns of the Russian media.

VoxCheck analyses which Russian narratives enter the Ukrainian information space as part of a joint project with the Center for Strategic Communications. You can find previous issues here.

Prove the intervention of “external forces”. Only not Russia!

Russian propagandists also talk about the “Western curator”. Some sources even claim that Ukraine is involved in the protests in Kazakhstan as an “instrument of the West.” It is alleged that “the plan for the color revolution in Kazakhstan was developed in London, and the main figure with whom everything was discussed was Zelenskyi.”

Kazakhstan President Tokayev said that “terrorists” (as he calls the protesters) underwent “serious training abroad” when he appealed to the CSTO to send troops into the country. But Russia almost immediately claimed that the protests were “inspired from outside.”

This tactic is not new to the Kremlin. During the protests in Belarus in 2020, Russian propaganda promoted the same message: the West allegedly organized these protests. And it is the West that is interested in “weakening Belarus.” We heard the same thing about the Revolution of Dignity. “Russia Today” wrote about the “destructive interference of foreign states” in the events in Ukraine and the political chaos that deprived Ukraine of its sovereignty to subjugate it to the United States.

In addition to protests in neighboring countries, Kremlin propaganda is focusing on riots in other parts of the world. They also allegedly have an “American footprint”. So they said about the protests in Hong Kong 2019-2020. And in Venezuela, where the authoritarian regime is headed by Putin’s ally, Nicolas Maduro. Protests against the government have been taking place in Venezuela since 2014. As expected, Kremlin propaganda blamed the West, including the United States. Here are just a few headlines from the flagship of propaganda campaign “Russia Today”:

Unpeaceful protest. Create a strongly negative image of the protesters

The pro-Russian “Strana” unilaterally covered the protests, emphasizing the brutality of the protesters. For comparison, “Ukrayinska Pravda” (included in the rating of quality Ukrainian media according to the IMI rating and the fact-checking resource Mediabias/Factcheck) neutrally described the actions of the protesters. Most of the publications about the protesters in the “Strana” were devoted to their brutality. Here are some headlines that appeared on the publication’s website during the week: 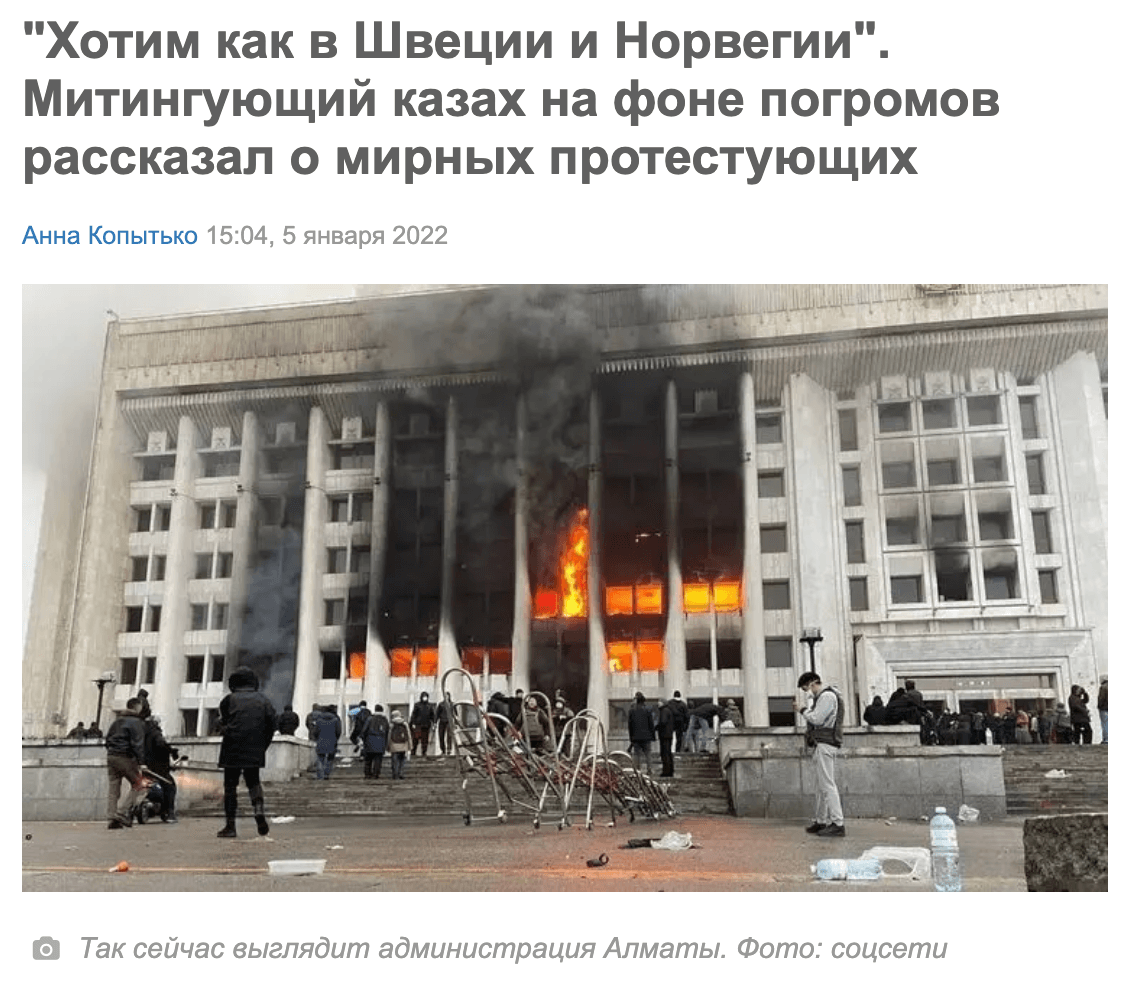 “We want as in Sweden or Norway” – the protesting Kazakh man on the background of pogroms talked about peaceful protesters. That is how Almaty Administration currently looks. Screenshot — “Strana”

However, the “picture” of the “Strana” could not be formed in any different way. In most publications, the source refers to Russian propaganda outlets, which show the official pro-government line. For example, “Sputnik Kazakhstan”, “RIA Novosti”, “TASS” and, of course, “Russia Today”. Numerous videos from “Sputnik” and “TASS” were published in the telegram channel “Politics of the Country”. The terms in the captions to the videos (“Almaty is clearing the streets of radicals”) seem to be from there too.

The essence of these reports is to form the idea that the protests are not peaceful.

The protests in Kazakhstan are indeed accompanied by looting. Peaceful protests began in Almaty on January 4, but later arson, robbery and the use of firearms were reported.

Organized looters began appearing on the streets on January 5. Armed groups on the streets of Almaty and other cities are not directly involved in the protests, BBC experts explain. Exactly how the riots started, who organized them and who gave the people weapons is still unknown. But the Kazakh authorities call all protesters “criminal groups.” It is Russian propaganda as well.

At the same time, for example, Kazakh journalist Aian Sharipbaiev says that “young men of athletic build” were not part of the protest movement and may be an analogue of Ukrainian “titushkas”. Similar methods have been already used in Kazakhstan against protesters in the past (1, 2).

The initial demand of the protesters was an economic one – to lower fuel prices. The speeches themselves were initially peaceful. According to the representative of the initiative group for the establishment of the Democratic Party, Aiherym Tuleuzhanova, most of those who went to the protests in the main square of Almaty were unarmed youth. When the protesters’ demands began to take on a political character, the authorities tried to disperse them by force, which led to a gradual escalation of the conflict. Security forces used light and noise grenades and tear gas to quell the protesters.

Manifestations of violence and aggression began just after the authorities ordered the police to use force to disperse the protesters.

On January 7, Kazakh President Tokayev said the authorities and security forces were dealing with armed local and foreign-trained “bandits” and “terrorists” whom they had to destroy. This statement shows why the authorities need to pass off all protesters as looters. Tokayev firmly rejected the possibility of holding peace talks. According to the president: “What kind of the negotiations can be with criminals and murderers?”. For the same purpose, CSTO troops were called to the country to suppress “gangs” and “terrorists”.

The Kremlin mentions “extremists” and “terrorists” every time they plan to intervene in a country. Under the slogan of fighting them, Soviet troops suppressed the uprisings in Hungary in 1956 and Czechoslovakia in 1968.

Pro-Russian outlets, mostly the “Strana” website, published articles about numerous victims only among law enforcement officers. As well as mentions of extreme brutality among protesters:

Another piece of news is about the allegedly beheaded three security officers (first there was information about two of them, later – another one). This information was published by the Russian state agency “RIA Novosti” with reference to the Almaty commandant’s office. There is no other evidence of this.

Based on these reports, a logical conclusion is drawn: the CSTO troops are needed for stabilization. Because the Russian and pro-Russian outlets labelled all the protesters as “bandits” and “murderers”. The terms “radical” and “protester” are becoming synonymous. They try to compare the actions of all protesters with the crimes of organized gangs. In some materials, the protesters are directly called terrorists.

“Even if peacekeepers do not engage in real combat, it will dramatically strengthen Moscow’s image as a “security exporter” in the post-Soviet space,” writes “Strana”.

The only available information about the victims is the data of the Ministry of Health of Kazakhstan. According to the latest report from January 9, 164 people died as a result of the riots.

On the night of January 6, dozens of protesters in Almaty were killed by law enforcement agencies. It was stated by the representative of the city police Saltanat Azirbek. There are no other official figures on the number of victims of the protests.

On January 7, Kazakh President Kassym-Jomart Tokayev ordered the army and law enforcement to open fire on the protesters without warning.

It is noteworthy that propagandists have been trying to prove the same about Euromaidan for years that the first victims were among security officers and that the people on Maidan were the first to take up arms against militiamen. As a result, it was allegedly not a peaceful protest that had to be suppressed by force.

Show what “maidans lead to”

No one hoped that the propagandists would forget Euromaidan. Especially the “terrible consequences” that Russia attributes to it. The pro-Russian media duplicate these messages: they intimidate by radicals and oppressions of the Russian language. 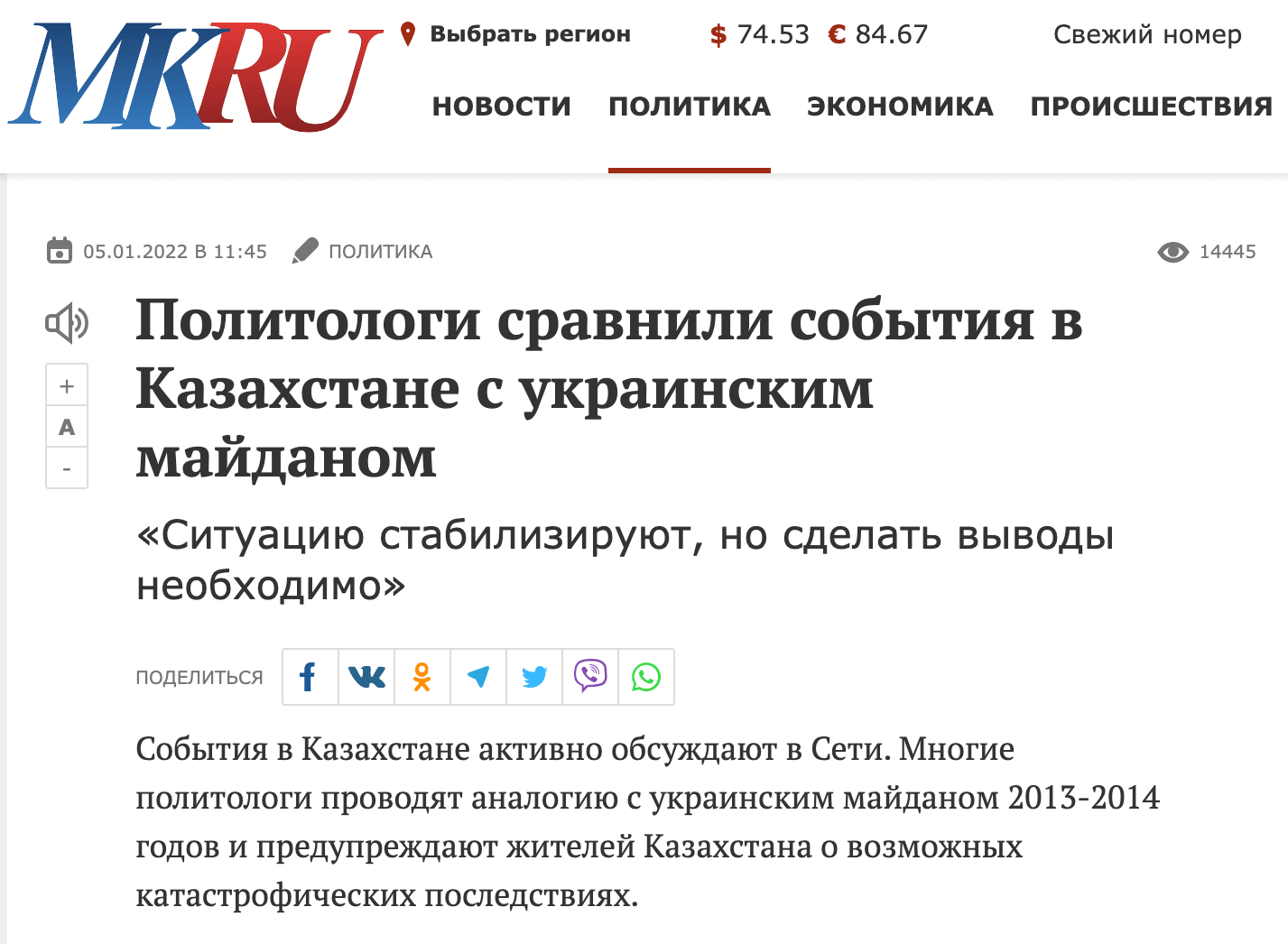 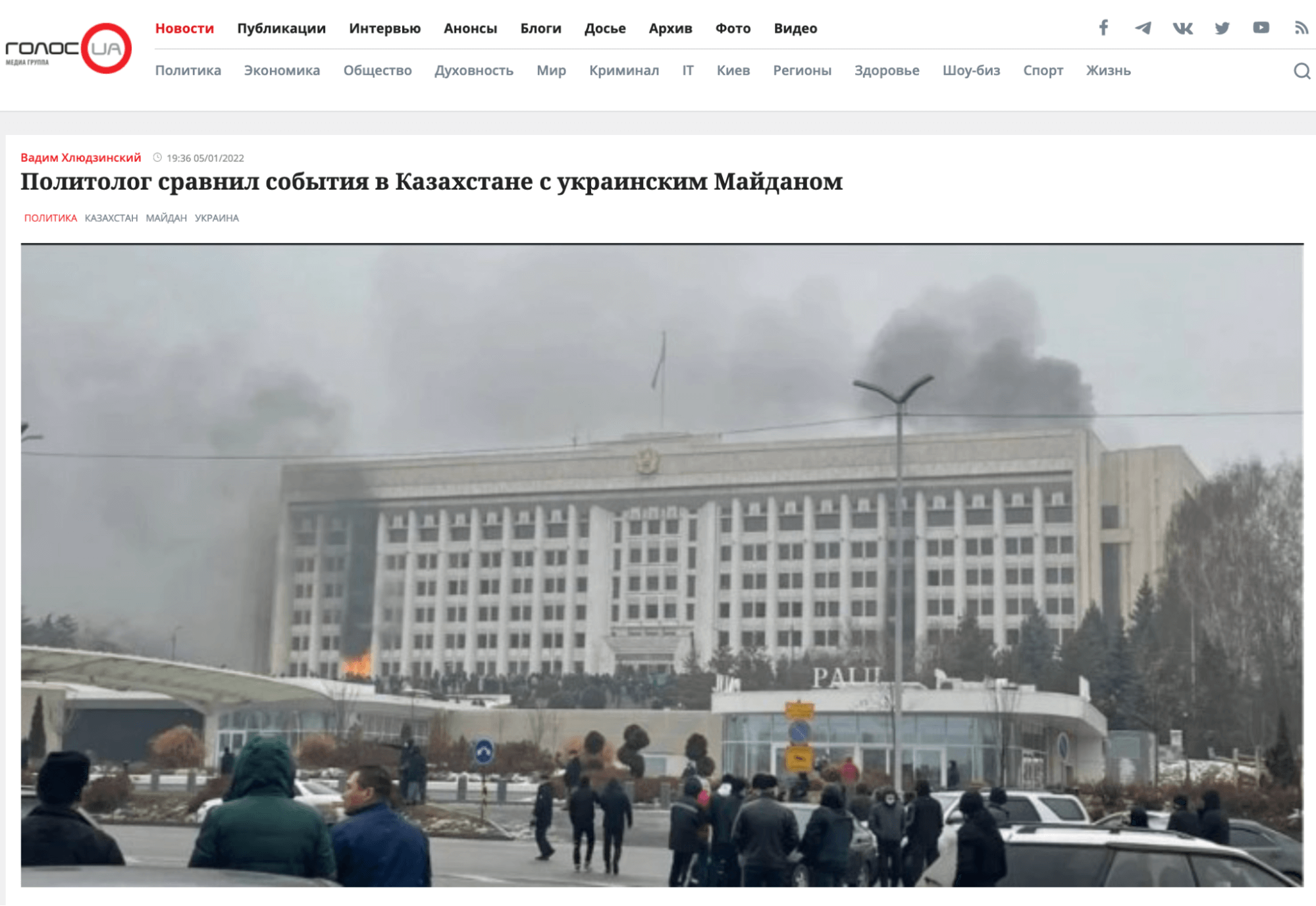 “Political experts compared Kazakhstan events to Ukrainian Maidan”. For comparison: the first screenshot is pro-Russian media in Ukraine, the second one comes from Russian outlet. Political experts are different, but the narrative is the same

VoxCheck refuted the fakes of propaganda about the Revolution of Dignity and its consequences for Ukraine in this article: “Crimea, Donbas and independence have been lost.” How pro-Russian media lie about Euromaidan”.

All propagandists in Ukraine, who are eventually led by Putin and Medvedev, like to comment on the law on indigenous peoples. We refuted their lies about the law in the articles “On the Historical Unity of Lies and Vladimir Putin” and “5 Points Of Dmitry Medvedev’s Lies”

VoxCheck analysts monitor the websites and social networks of Ukrainian pro-Russian media and identify the main news or topics of the week that have received the most airtime or attention in the news feed. We identify key narratives for the past week and analyze their origins.

VoxCheck looks for fakes and manipulations and refutes them. The basis of the test is the “click and check” method. Everyone can check our arguments and sources. Verification can only be based on open data with relevant links. An article with a fact check can be published only if two editorial board members sign it.