The armed confrontation between Ukraine and Russia started in March 2014 when Russia annexed the Crimean Peninsula, a sovereign Ukrainian territory. Following the annexation, Russian-inspired protests took place in the Donetsk and Luhansk (the Donbas region) and escalated into a war in Eastern Ukraine. In a recent study (Pham et al., 2021), we examine the impacts of this military conflict on banking activities in the immediate area of dispute and the extent to which these impacts were propagated to the whole Ukrainian banking sector.

The armed conflict led to severe damages of banking infrastructure in the conflict areas. In addition, Ukrainian banks faced substantial losses and funding issues due to unpaid loans and substantial deposit outflows in the Donbas region. Among others, banks that issued more loans in the Donetsk and Luhansk regions prior to the conflict were hit hardest. After the onset of the conflict, such banks faced a higher ratio of non-performing loans compared to their peers. The more exposed banks also experienced a greater reduction in their rate of loan growth.

More importantly, the negative impacts of the war on banks were not limited to bank branches in the dispute areas but were transmitted to branches in other markets as well. Yet, the farther a market was from the conflict zone, the lesser impact it faced (Figure 1). Further analysis suggests that Ukrainian banks changed their lending practice following the onset of the conflict. Particularly, while there was an overall reduction in lending, the decline in credit supply was more severe in the regions farther from banks’ head offices (Figure 2), i.e., the “flight to headquarter” effect.

While the study was centred around the conflict in Eastern Ukraine that started in 2014, its results are still relevant to today, not least because the war is still on-going and also because Russia is expanding and escalating aggression against Ukraine. On 21 February 2022, Russia announced its recognition of two breakaway regions (separate areas of Donetsk and Luhansk regions’), as independent entities. By the time of this writing (24 February 2022), Russia has launched a direct military attack on Ukraine. If such aggressive actions continue being escalated, the Ukrainian economy and banking sector particularly can be affected. However, we hope that the continuing efforts to make the banking system more stable, well-capitalized, and liquid, coupled with the temporary measures (e.g., imposing cash withdrawal limit), could help mitigate the negative impacts. 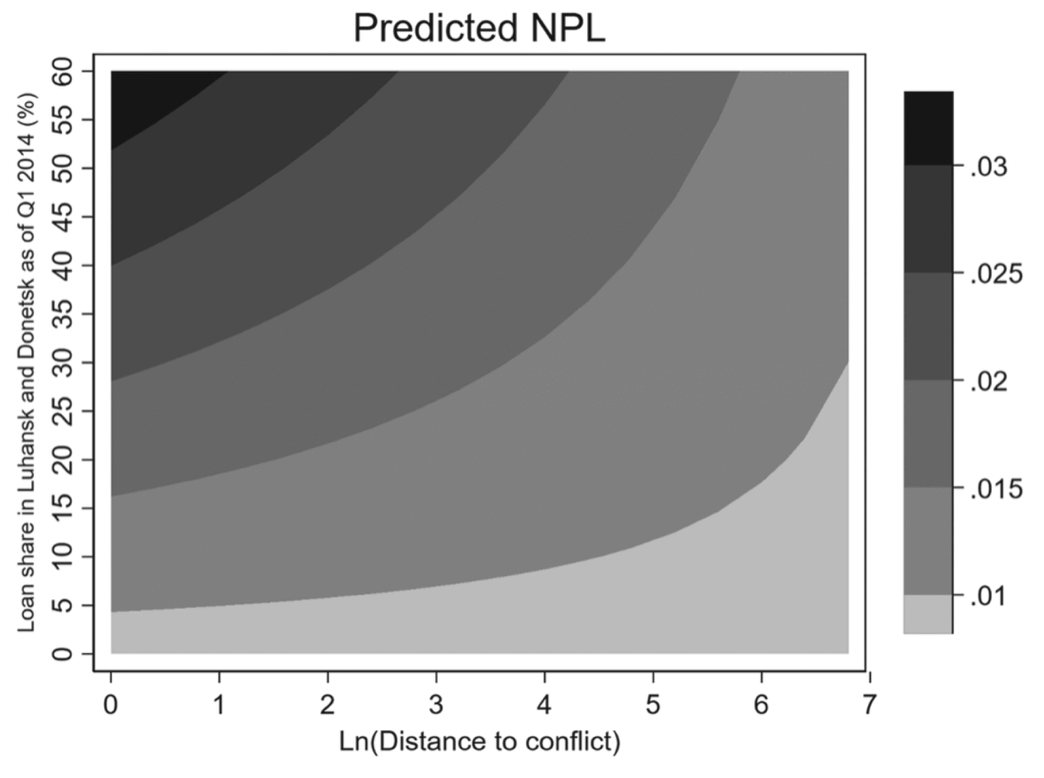 Notes: This figure shows the effects of the interaction between the conflict exposure (indicated by Loan share in Luhansk and Donetsk in Q1 2014) and distance to conflict on the post-conflict NPL ratio. The darker colour reflects the higher predicted NPL ratio. 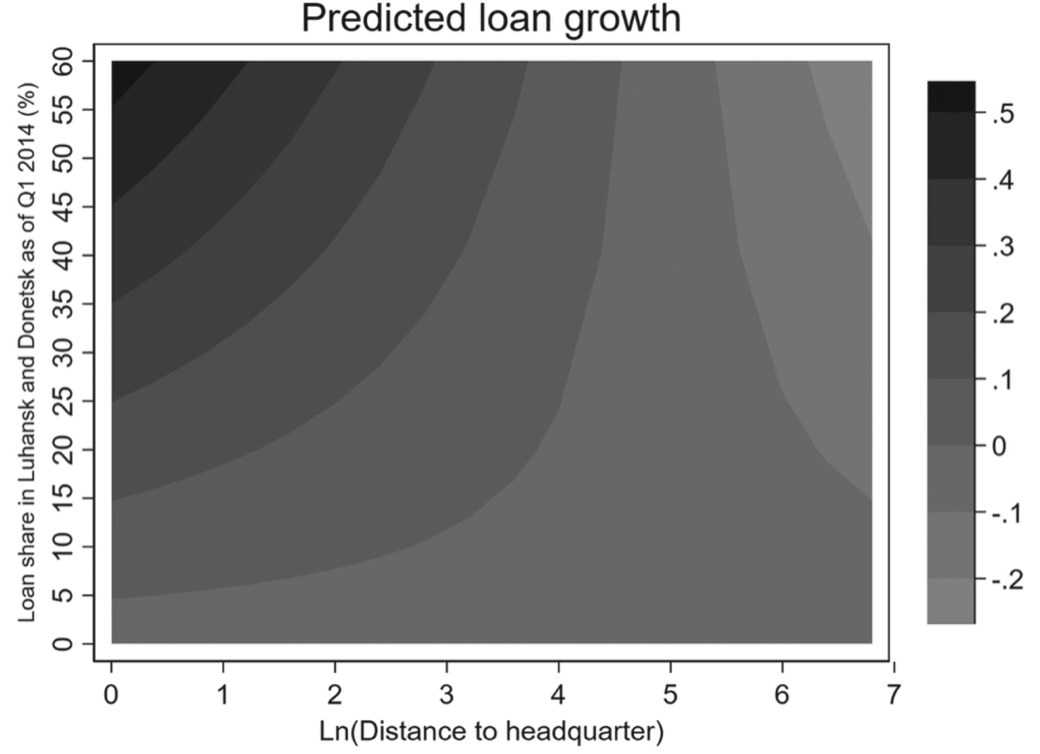 Notes: This figure shows the impact of the interaction between conflict exposure (indicated by Loan share in Luhansk and Donetsk in Q1 2014) and distance to headquarter (DistanceHQ) on the post-conflict loan growth, holding other variables at their means. The darker colour reflects the higher predicted loan growth.

More details on the research can be found following the link:  doi.org

You can follow the official updates on Ukraine’s banking system via this link: bank.gov.ua

The NBU opened a special account to support Ukrainian army. The details are here: bank.gov.ua 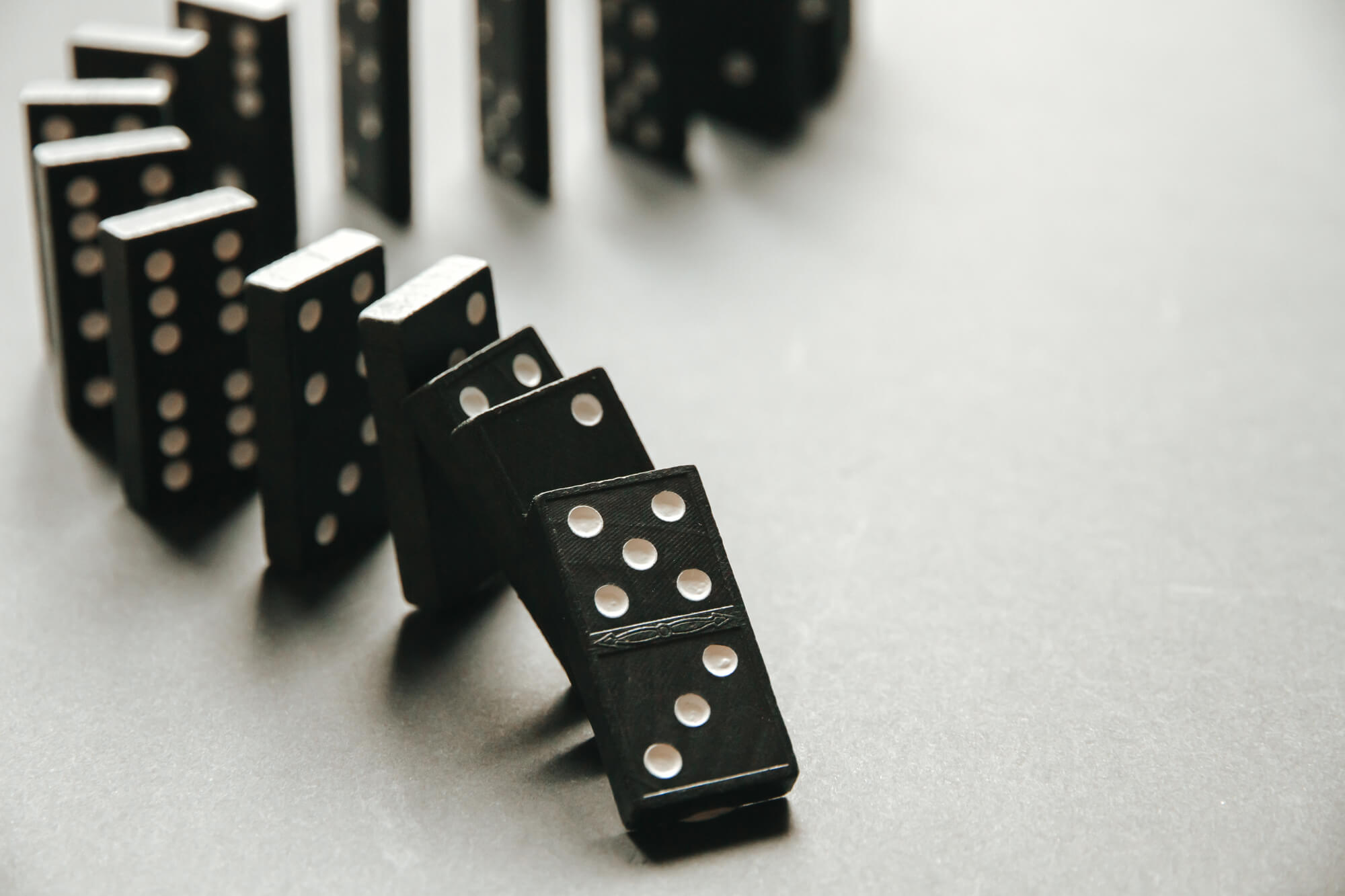 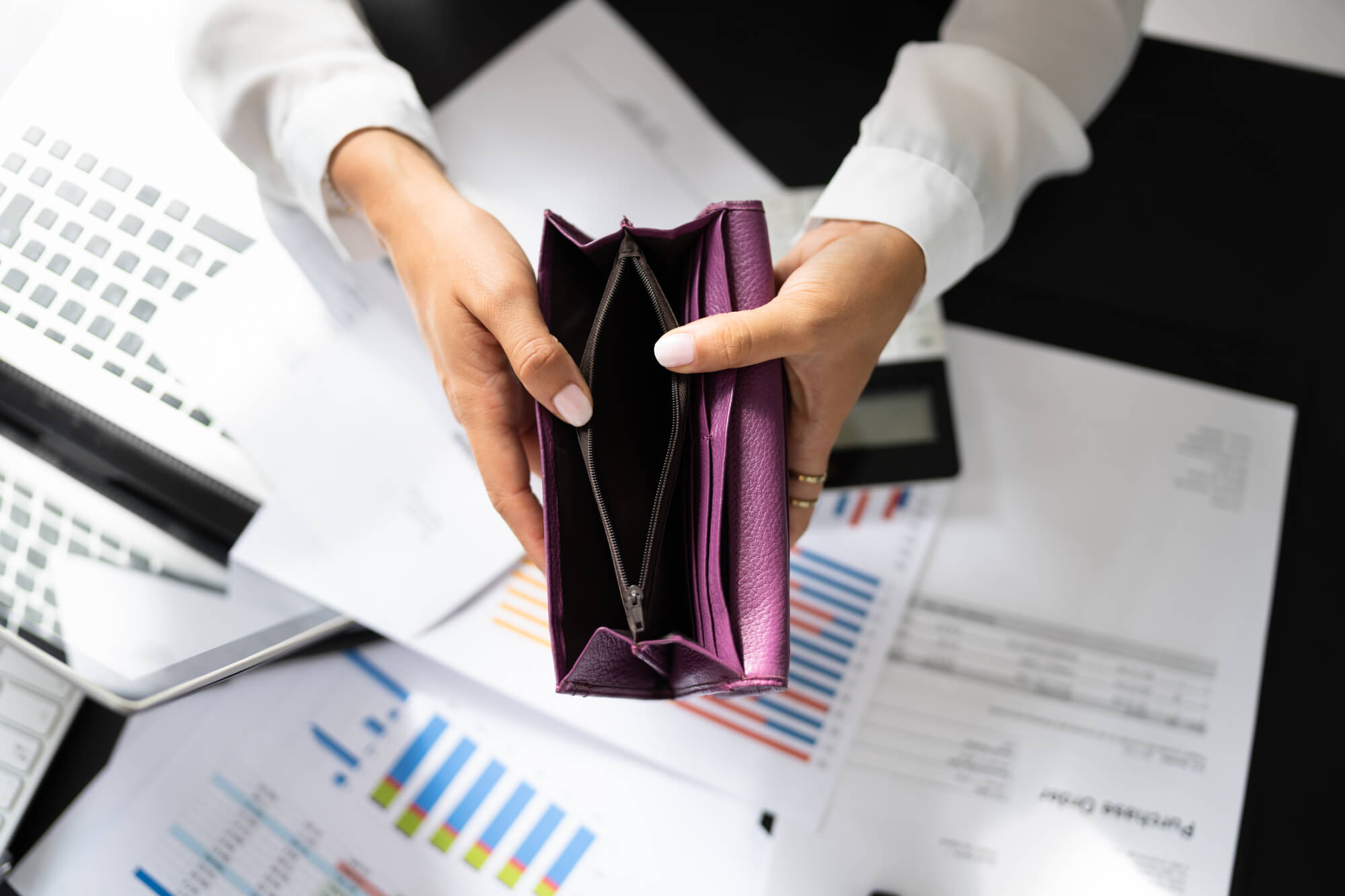