Alternative Parties and Coalitions in Rada

Parties serve as a vehicle to be elected to the parliament but afterwards there is little coherence of voting within a party. Each group of deputies that vote together have representatives from the majority of the parties. Thus, the interests, as reflected in similar votes, span across parties.

What are the real parties and coalitions in the parliament? This article analyzes all votes during the first and second sessions in the 8th Rada and identifies groups of deputies who vote together. The classification algorithm is explained below. We have identified five groups of deputies.

The largest group consists of 292 deputies. This is a super majority which tends to vote together. It includes majority of the members from all parties: 106 from Block Petra Poroshenko, 60 from Narodnyi Front, 25 from Samopomich, 16 from Batkivschina, 16 from Liashko party, 20 from Opposition Block, 25 from Non-affiliated, 12 from Volya Narodu, and 13 from Vidrodzgennya. This is the de facto broad (shyrokaya) coaltion.

The second largest group consists of 44 deputies. It includes 10 from Block Petra Poroshenko, 10 from Narodnyi Front, 3 from Samopomich, 1 from Batkivschina, 3 from Liashko, 8 from Opposition Block, 6 from Non-affiliated, 1 from Volya Narodu, and 2 from Vidrodzgennya.

The third largest group consists of 38 deputies. It includes 16 from Block Petra Poroshenko, 8 from Narodnyi Front, 3 from Samopomich, 1 from Batkivschina, 1 from Liashko, 3 from Opposition Block, 4 from Non-affiliated, and 4 from Volya Narodu.

The fourth largest group is 27 deputies: 8 from Block Petra Poroshenko, 4 from Narodnyi Front, 1 from Samopomich, 2 from Liashko, 2 from Volya Narodu, 4 from Non-affiliated, and 6 from Opposition Block.

The smallest group is 6 deputies. There is one deputy from Block Petra Poroshenka, Narodnyi Front, Batkivschina, and Opposition Block, and 2 deputies from Vidrodzgennya.

There are three main conclusions:

The software is available at https://cran.r-project.org/web/packages/oc/index.html

The data is all the votes from the VII-th Rada, Sessions 1 and 2.

The input command in the algorithm was as follows

Step 2. The members of the parliament were identified with their two-dimensional coordinates obtained in the previous step. We used K-means algorithm to cluster these coordinates, with k=5. The algorithm tries to split the deputies (coordinates) in 5 groups to minimize the average error from the center of the group to its members. The parameter k = 5 was chosen based on the relative reduction of the average error; it flattens out at k=5 (i.e., increasing the number of clusters does not substantively decrease the error). Indirectly, we can see that increasing k beyond 5 is unlikely to change the results since the 5th cluster has only 6 members.

The estimated clusters are plotted in Figure 1 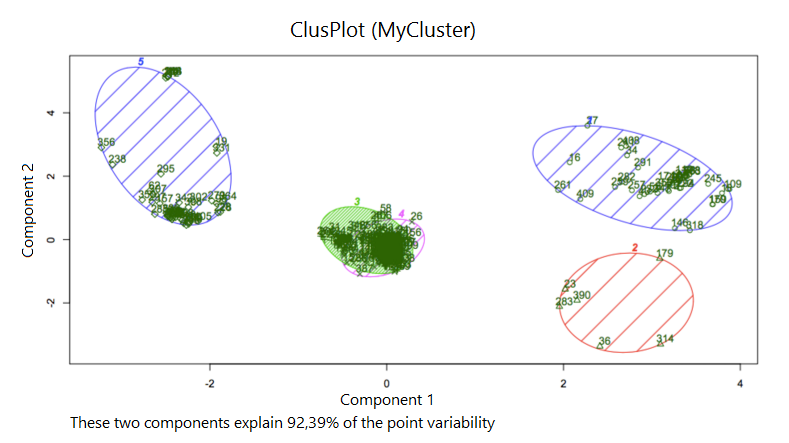