On the group level, the structure of the co-authorship does not correspond to the formal coalition-opposition split. This suggests that MPs of different factions employ strategies for cooperation that go beyond formal cleavages and, in our opinion, reveals the circumstantial and opportunistic character of the current Ukrainian Parliament. The data reveal that MPs operate withing a structure of spontaneous agreements, if not collusions, instead of formal party or coalition lines, and their cooperation is largely based on individual reputation.

The eighth convocation (term) of the Ukrainian Parliament (Verkhovna Rada) started on November 27, 2014. Usually the Parliament consists of 450 members (MPs), however at the begining of the current term 28 sits were vacant. 50% of the MPs were elected under party lists, and 50% under single-member constituencies.

All the MPs who serve the current term are divided in eight majour factions and non-affiliates. Although 302 Members of Parliament from five factions created a coalition, studies revealed that multiple subgroups of MPs voted dissent from the party and coalition lines [1, 2]. In this research we take the matters further and study the legislative co-authorship of Ukrainian MPs.

There are few reasons to focus on the legislative co-authorship. First, factions prove their symbolic alliances by proposing conjoint legislative acts. Second, 65% of the MPs in the new Parliament have not served there under the previous president. Therefore the new MPs may be not experienced enough to make laws themselves. The old MPs may benefit from the co-authorship as well since their old ties were broken. Third, co-authorship may indicate some agreements between MPs that go beyond party cleavages. Fourth, co-authorship ties indicate a presence of the preexisting networks that may affect the process of voting.

We employ the VoxUkraine legislative co-authorship data for the second session of the eighth convocation. A co-authorship is an event of occurrence of an MP’s name with another MP’s name on the title of a law.

You can explore the interactive network visualization to identify clusters and important MPs of the co-authorship network (img.1) [1]. These data are enriched with variables describing MPs. All the variables are described in Table 1.

Image 1. The Co-authorship network of the Verkhovna Rada VIII 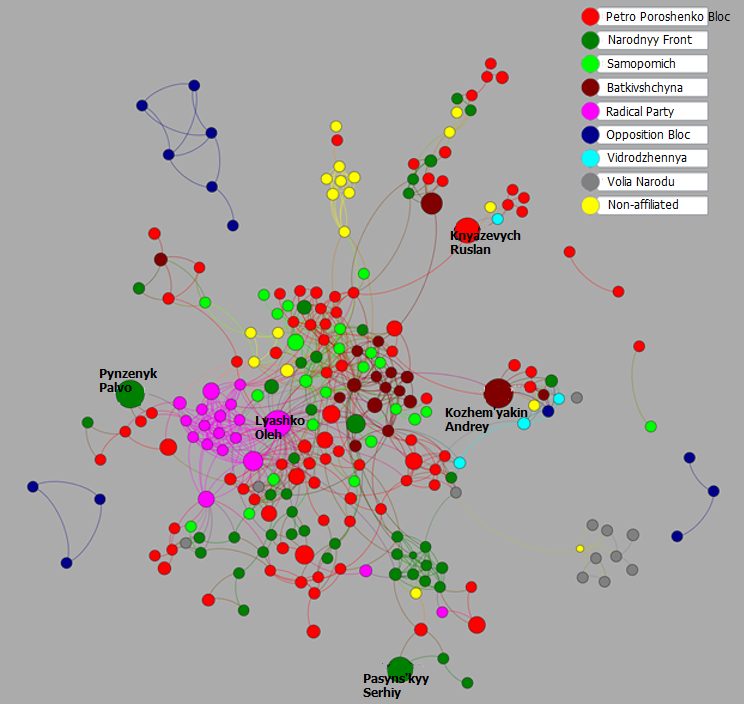 The main feature of the data is that it includes ties between MPs (i.e. events of co-authorships). An example of the data structure is listed in Table 2.

Table 2. An example of ties between co-authors (co-authors for Abdulin O.R)

We employ the methodology of social network analysis, which operates with such notions as nodes and ties (for more details see the previous VoxUkraine posts).

There are 418 MPs in our dataset that serve as nodes in our analysis. MPs are connected to each other generating a one-mode network. We excluded Eremeev Igor, Tymoshenko Yurii, Gvozdev Mykhailo, and Nasirov Roman from the set. They either joined the Parliament later or exited it earlier for different reasons. We do not expect any serious bias since their total amount of ties accounts for only 0.7 (i.e. 125 ties out of 19,148).

397 MPs out of 418 MPs co-authored at least once. Each co-authorship is a tie between a pair of MPs. Sometimes a pair co-authored more than once. Overall, there are 19,148 ties in the data.

We consider two different types of cooperation between MPs.

Group-level. Two different factions may cooperate with each other by means of mobilizing different MPs (some of them are experts in economics, some in civil rights, some in European integration), but individually the co-authorship between a given pair of MPs is not necessarily systematic. In other words, factions may cooperate but this does not mean that a particula pair of MPs from different factions is a pair of allies.

Individual level patterns will be investigated by means of correlations. We employ QAP (Quadratic Assignment Procedure) correlations to study the association between co-authorship, MPs’ attributes, and network properties. Group level patterns are investigated by comparing values of MPs on the aggregated level of their factions. Please note that we do not investigate two-mode networks where MPs are connected to factions. We study our one-mode network where attributes of all MPs (nodes) have certain values. These values are averaged by factions and are discussed in the text.

Overall, the correlations between all the MPs’ attributes and the co-authorship process are close to 0. Thus, we conclude that the individual co-authorship cannot be attributed to socio-demographic profile, MPs’ activities, their type or even their group affiliations.

Only a few of the centrality measures are significantly correlated with certain attributes.

Here we conclude that individually MPs tend to co-author frequently but not systematically.

Imagine if all MPs would co-author frequently within their factions (or within any other clearly defined group). In this case MPs would have very high degree-centrality but very low betweenness centality. Our results suggest that something different happened in the Ukrainian Parlieament. Those MPs who co-author frequently tend to do it sporadically with different people, not restricting themselves to a particular circle of MPs. They also tend to co-author with someone who is better connected which indicates an importance of reputation in the netwrok.

We also discover that attendance is correlated with closeness-centrality. In other words, some MPs co-author directly with many other MPs. These well connected MPs tend to attend Parliement sessions frequently. It seems that daily interactions at the work place are important to facilitate reputation and cooperation of MPs.

Here we move from correlations to aggregated data comparisons. Table 3 shows the mean values of MPs by the factions they belong to [3].

Table 3. Centralitiy measures and the share of ties to other parties for MPs by their factions

Our data suggest that there are two possible dimensions for the group level cooperation. The first dimension represents the cross faction cleavages. Some MPs tend to cooperate more within their factions while other MPs tend to cross these borders (i.e. “binding” and “bridging”). Another dimension concerns with eigenvector-centrality. It shows that whether MPs co-author with influential MPs. We refer to this as the “reputation effect”. All factions are grouped with respect to these two dimensions in Table 4.

Table 4. Two dimensions of cooperation on the group level

Our analysis reveals an importance of the legislative co-authorship as a source of cooperation between MPs. 397 MPs out of 418 co-authored at least once. However, the co-authorship is nor stable neither structured. On the individual level most MPs prefer to co-author with other MPs regardless their formal affiliations or any other attributes. Most ties are episodic and not reoccuring. On the group level, the structure of the co-authorship does not correspond to the formal coalition-opposition split. This suggests that MPs of different factions employ strategies for cooperation that go beyond formal cleavages and, in our opinion, reveals circumstantial and opportunistic character of the current Ukrainian Parliament. The data reveal that MPs operate withing a structure of spontaneous agreements if not collusions instead of formal party or coalition lines, and their cooperation is largely based on individual reputation.

[3] For this table we made calculation for only unique ties between pairs. In this way the outliers who co-authored frequently do not inflate our results