A Lepton “God”: Proof of the Collapse in the Ukrainian Scientific Degree Awarding System | VoxUkraine

A Lepton “God”: Proof of the Collapse in the Ukrainian Scientific Degree Awarding System

In January 2016 Ukrainian scientists were shocked to discover the thesis in the field of Pedagogy that was written by Mrs. Kateryna Kyrylenko containing pseudoscience and plagiarism. Subsequent development of the story became a proof of the collapse in the Ukrainian scientific degree awarding system. After all this case is just an example of a corruption that destroys Ukraine as cancer.

Let us begin with a puzzle and propose to read the following paragraph:

“The soul is unable of practical activity unless it is embodied in an organic form. A lepton “God”, whose mind in its original form was identical with its lepton body, creates a variety of its “bodily organs”. The synergistic systems that it creates become “organs” of its activity. The “Tools” of its activity are the same resonant interactions that take place in synergistic processes of tiered systems’ self-development. One would assume that God with his creative activity is seeking the escape from boredom. Besides, one could argue that it is him that invents a variety of games for himself: he is playing creation of the Cosmos in order not to feel bored.”

What is the origin of the text? Is it a religious manuscript or just a pseudoscientific delirium? In January 2016 many Ukrainian natural scientists were shocked to discover that this is a paragraph from the thesis in the field of Pedagogy written by Mrs. Kateryna Kyrylenko. She got the Doctor of Science (Habilitation) degree from the Ukrainian Ministery of Education in December 2015.

Furthermore, it turned out that the whole paragraph was not originally written by Mrs. Kateryna Kyrylenko, but she plagiarized about 10 pages (pp.153-163) of her thesis by copying large parts of text from a pseudo-scientific work of another author without proper citations.

At least 300 millions of UAH per year are wasted for plagiarism and pseudo-science in Ukraine.

What is even worse, it was revealed that Mrs. Kateryna Kyrylenko included the plagiarized pseudo-scientific material into numerous textbooks and uses it to teach a course “Culture and Science”. The pseudo-scientific text that led nicknaming the author of the thesis as Kateryna Leptonivna Kyrylenko in the Facebook community is just a cherry on top of a pile of the plagiarism in total over 30% of the text that was revealed by a careful examination of the thesis done by Tetiana Parkhomenko. It was her appeal that forced the Ukrainian Ministry of Education to investigate this case.

It has to be stressed that in the Ukrainian scientific degree awarding system this degree is awarded by the State rather than by the University and guarantees a 20% salary increase and a possibility to take an administrative position at a university. There are some estimates that over 300 millions of UAH per year are wasted for paying such bonuses to the people who got their scientific degrees for plagiarism and pseudo-science.

Since the plagiarism in the thesis has a severe copycat character when entire paragraphs are copied, the experts were forced to acknowledge that Mrs. Kateryna Kyrylenko indeed copied the text, but from her own scientific publications where she referred to the papers of other authors. This, as concluded by the “experts”, is not plagiarism anymore. The detailed analysis how “the experts” ignored the obvious facts can be found here. Despite all these facts on 10 June 2016 the academic council where the degree was defended on 15 October 2015 unanimously confirmed its original decision. The whole story reached its culmination on 1 July 2016, where the Council of the Ukrainian Ministry of Education has accepted this decision without making an attempt to consider the allegations of the scientific community. In her speech delivered to the Council Mrs. Kyrylenko acknowledged that she included knowledge that goes beyond science in her thesis, but stated that she simply borrowed these ideas from the other author. She insisted that it is necessary to teach the student this “non-scientific” knowledge as she already does without making a clear difference between science and pseudoscience.

There are two major dangers from this decision – what is called plagiarism in global science is now officially allowed in Ukraine (Mrs. Kyrylenko told in her speech on June 10, 2016 that she did not want to overload the thesis with bibliography – and this argument was accepted by the academic council, as well as the “expert review” allowing copying of large portions of text with mentioning real authors somewhere else, and due to previous resolutions by the Cabinet of Ministers of Ukraine the Ministry of Education was left with little powers to oppose that), as well as teaching pseudo-scientific nonsense to students allegedly to form “holistic picture of the world”. Obviously, no degrees and certificates from such educational system can be recognized anywhere, and that undermines trust to the country in general.

This case is just an example of a corruption that destroys Ukraine as cancer.

It is a right moment to explain why the Ukrainian degree awarding system made such a serious failure. Mrs. Kateryna Kyrylenko is not just an ordinary scientist doing honest research, she is the wife of Vice-Prime Minister of Ukraine Vyacheslav Kyrylenko who defends her in the media and on Twitter (for example, here and here), as well as behind the scene. Mr. Kyrylenko is the current boss of Ukranian Education Minister Dr. Liliya Grynevych (who controls all the system of granting of scientific degrees), and Mrs. Kyrylenko works at the University of Culture subordinated to Mr. Vyacheslav Kyrylenko – so we have a blatant case of conflict of interest that hampers any attempts of the scientific community to insist on a fair investigation of this case. It is interesting to mention that one of the professional duties of Mr. Vyacheslav Kyrylenko is to enforce the copyright laws in Ukraine. Thus, all this case is just an example of a corruption that destroys Ukraine as cancer.

We conclude the text by one more plagiarized paragraph from the thesis of Mrs. Kateryna Kyrylenko:

“Setting aside the matter of “emotions” of “rough” forms of the matter in the physical macrocosm, let’s assume that light and “subtle” leptons, when they are joined in conglomerations, get certain “extraordinary” properties. The psyche in the biological world exists as a result of the nature’s development. It has its actual carrier – a physical particle. This particle is still unknown to the science at its present level of development. We only know that one must look for it in the world of sub-elemental particles leptons. Even though primary particles that constitute the matter of the Universe on the way to the Big Bang are not yet capable of experiencing emotional states. But sooner or later those lepton forms, which are capable of this and which should be natural carriers of mental processes, are reproduced as well.”

The Ukrainian educational system has just confirmed that this kind of plagiarized research deserves a scientific degree. In the essence it states that leptons – elementary particles widely studied in the particle physics develop feelings, passion, thought and self-consciousness similar to those in biological systems. Here is the link to the corresponding publication of Mrs. Kyrylenko in p.81 which is claimed to be a publication in a foreign scientific journal as required by the Ukrainian Ministry of Education. 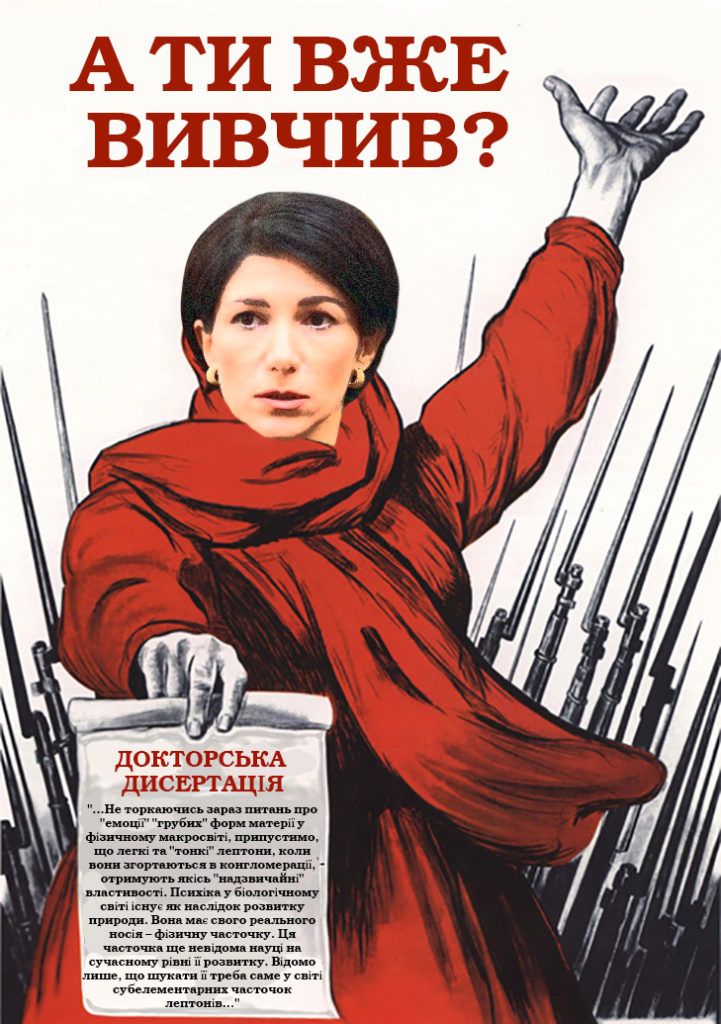 Overall there are two strategies how to improve the present situation with the degree awarding system in Ukraine. The first one is regulatory. It involves closing loopholes in the existing rules, creating the state repository of the theses, where the texts will be checked for plagiarism. This is not a winning strategy. For example, the abovementioned publication of Mrs. Kyrylenko in a “foreign scientific journal” is the result of a previous attempt of the Ministry of Education to increase the quality of theses by demanding publications in referred foreign scientific journals. As a result the “garbage journals” that only mimic scientific approach have immediately flourished. Accordingly, a new version of the rules which is now in progress will attempt to specify better which referred scientific journals are appropriate. The idea to check theses for plagiarism in the state repository sounds good. Nevertheless, this will not help to reveal that the text is plagiarized by translating it from Russian (this is the case of Mrs. Kyrylenko’s thesis) or English. One may at the end simply rephrase the plagiarized text until it will pass the control.
The second strategy is to change drastically the rules of the game, viz. to award the degrees by universities themselves rather than by the state and to remove the automatic salary increase for the scientific degree. This strategy looks more promising, at least because bureaucrats never working in science and interested in higher salary will be excluded. Yet, natural cleansing of the scientific community is only possible if real scientists are present in a particular area of science. There are strong doubts that this will help to improve the quality of theses, for example, in pedagogy.
It took a while before Ukrainian governments learned out that just printing money does not help to resolve economical crisis. It seems it will take even more time before the governments, where people like Mr. Kyrylenko are working , learn out that nepotizing scientific degrees to satisfy ill ambitions to somebody’s wife would make the degree’s certificate a useless piece of paper.