Verkhovna Rada has approved allocation of 2 billion hryvnas for the inefficient social and economic development subvention at the second reading of the draft of the State Budget for 2020. This subvention was not included into the first reading. The politically loyal regions are going to receive it instead of those really needing it.

The problem of politically motivated distribution of funds and its possible solution is explained by Oleksii Hamaniuk, the researcher of Kyiv School of Economics.

Funds distribution in Ukraine is often influenced by political will. In the absence of strict rules of funds distribution, every administration seeks to ensure preferential financing for the regions where locally elected MPs or local administrations are loyal to the central power.    Such principle of funds distribution is inefficient, as the regions politically loyal to the central power are not always in real need of additional funds. That means that other regions are under-financed.

Social and economic development subvention is a typical symbol of politically motivated distribution of funds in Ukraine. There are no strict rules for distribution of this subvention. The Ministry of Finance is supposed to gather a commission to determine which regions get the funds and how much. At least half of the commission seats are given to the parliamentarians from the budget committee of Verkhovna Rada. So, this commission decides how the subvention is shared among the specific regions.

The directive to distribute the social and economic development subvention in 2019 was given by the former government. However, the directive distributed only just above 1 billion hryvnas from the 5 billion allocated in the budget.  Figure 1 shows the subvention distribution per capita by regions. The regions where at least half of the districts were represented by pro-government deputies (Petro Poroshenko Block and People’s Front) are marked by chocolate-brown color. One can see that these regions received much more per capita funds compared to other regions.

Fig.1 Subvention distribution per capita by regions, according to the Cabinet of Ministers of Ukraine Directive dated 05 June 2019 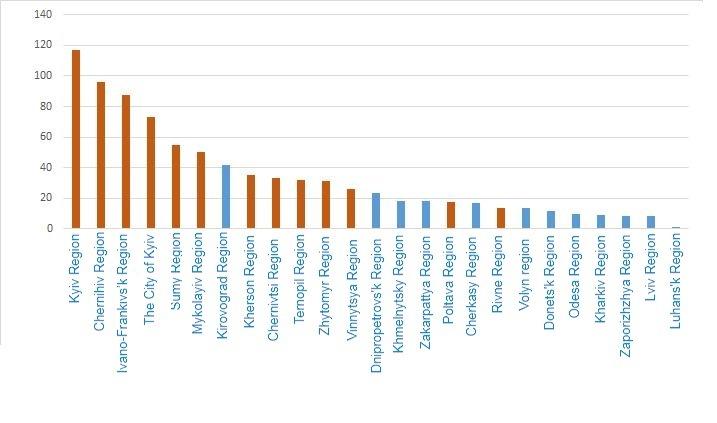 Figure 2. The connection: subvention volumes per capita vs. pro-government deputies per region. 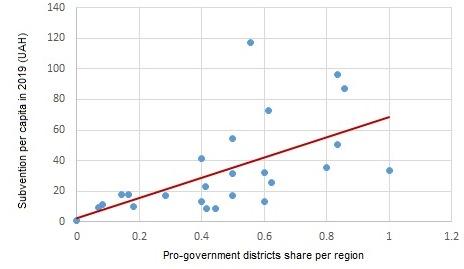 Moreover, the subvention funds are usually spent on small things such as window glazing in schools or repairing roofs instead of infrastructure projects essential for regional development. The Accounting Chamber has also reported about the inefficiency of subvention funds spending.

During the first reading of the Law on the State Budget for 2020 there was no provision for the social and economic development subvention.  However, a number of MPs insisted on returning the subvention. In the long run, the final version of the budget allocated 2 billion gryvnas for it. This is 2.5 times less than in the budget of 2019 but the amount is still large.  If the principle of politically motivated distribution is kept next year, the funds will most probably be shared and spent inefficiently.

The road maintenance funds at risk of politically motivated distribution

In addition to the social and economic development subvention, the above studies reveal political motives of road maintenance funds distribution in 2007-2017. Specifically, the regions where the local administration party was the same as the coalition party in Verkhovna Rada received more funds per 1 km of roads than other regions.

Further studies show that the situation with distribution of funds for national roads started to change in 2018. More consideration was given to the roads length and traffic intensity instead of political factors. Subvention for local roads is distributed proportionally to the length of roads. The changes were made possible after the Road Fund was established in 2016 and the Procedure of National Road Fund financing was approved by the government in 2017. That means that political influence on the road funds distribution is being reduced.

However, this does not keep MPs from trying to turn it back.  Specifically, some MPs tried to amend the draft laws on the medium-term budget planning of road maintenance expenditures. The amendment was to create a commission to specify which construction, reconstruction or repair projects will receive the funds allocated for roads. This commission was to give 50% seats to the MPs from the budget committee or the transport and infrastructure committee, depending on the amendment version proposed.  Moreover, they proposed to create such a commission both for national and local roads.

It is hardly possible to perceive the logics of such proposal, where the parliamentarians but not local administrators are to choose which local roads must be financed. It is worth mentioning that the proposed commission is very much alike to the one dealing with distribution of social and economic development subvention.  It also has 50% seats for the MPs from the budget committee of Verkhovna Rada. If these amendments had been approved during the second reading it could have been highly possible that roads would have been repaired mostly in the districts of the MPs loyal to the acting power.

Fortunately, the amendments were not included into the second reading, and Verkhovna Rada has approved the draft laws 1041 and 1064 without them.

The solution of the problem

That means that the social and economic development subvention must be abolished. There is the State Regional Development Fund (SRDF) in Ukraine. The Fund’s goals are almost identical to the subvention. However, the procedures are different from the subvention as the funds are distributed according to the strict rule: 80% per capita and 20% to under-developed regions. If the funds for regions are allocated through SRDF only, the distribution among regions will be less influenced by political motives.

The parallel action must be taken to control spending after the SRDF funds are received by the regions. The funds must be spent for really important projects but not for small things, without any politically motivated distribution on the local level.

Decentralization is another important mechanism for helping the regions. The recently created amalgamated territorial communities receive 60% of the personal income tax.    These revenues usually exceed funding from the social and economic development subvention or from SRDF. At the same time, the regions are becoming more independent from the central power. So, the creation of territorial communities is the best way to help the regions. However, if the MPs are so eager to finance regional development from the state budget, they should better do this through the SRDF.

In the summer of 2019 the parliament has approved the new Electoral Code which cancelled the majoritarian electoral part and provided proportional electoral system with open party lists.   As of today, the President of Ukraine vetoed it and proposed the amendments.

The author’s article published 1.5 years ago at VoxUkraine began with the following words: “During the last 10 years the politicians – the “orange”, the “white-blue” and the “brand new” ones alike – sent almost 20 billion hryvnas, or two thirds of the subvention amount, to their “home” regions”. The “green” politicians might join the company next year. This remains to be seen.