This week, pro-Russian websites tried to accuse Ukraine of provocations and a deliberate escalation in Donbas. In particular, because Ukraine’s Armed Forces used the Bayraktar UAV  for the first time in response to the shelling that killed a Ukrainian serviceman. And on the anniversary of the expulsion of the Nazi occupiers from Ukraine, they fed the old myths of Soviet historiography and “fascism” in modern Ukraine.

What happened in reality

On October 26 in the evening, the Joint Forces Operation HQ reported the shelling by Russian occupation forces near Hranitne in the Donetsk region. The occupiers fired 122-mm howitzers on civilian objects and the Armed Forces positions, the weapons prohibited by the Minsk agreements. As a result, one Ukrainian serviceman was killed, and another was wounded. On the following day, October 27, Hranitne was shelled twice. Russian mercenaries also dropped explosive devices from an unmanned aerial vehicle near Hranitne.

The Armed Forces Command decided to use the Bayraktar UAV. The Ukrainian military destroyed one D-30 that fired on Hranitne. The General Staff said they did it after the diplomatic methods had failed – the occupiers had not responded to the Armed Forces’ demand to stop shelling Ukrainian positions. However, the Armed Forces used MAM-C, which enabled the servicemen of the Russian occupation forces to flee from the impact point and survive.

Pro-Russian media reported that the use of the Bayraktar UAVs violates the terms of the July 2020 truce signed by the Tripartite Contact Group.

“It will be recalled that according to the truce agreement signed last year in July, both parties are prohibited from using unmanned aircraft systems. Yet this time, the Ukrainian side officially admitted to having used them,” Strana writes.

A ban on the use of UAVs by the parties is in place. The first paragraph “bans the use of all types of unmanned aerial vehicles.” However, another paragraph bans the “use of any fire, including sniper fire”, which the militants constantly violate.

The Bayraktar drone was used as a last resort. The militants did not stop shelling even after the Ukrainian side had used a standard response mechanism demanding a ceasefire through the OSCE SMM. Also, under the terms of the July 2020 armistice, retaliatory fire is allowed in the event of a failed effort to use the response mechanism.

The media outlet also ignores the important fact that the occupiers were the first to use unmanned aerial vehicles. Serhiy Harmash, a representative of the Ukrainian Delegation to the Trilateral Contact Group, explained that Russian Orlan-10 UAVs had long been recorded in Donbas.

Ukraine also did not violate the Minsk agreements because the Bayraktar UAV did not cross the line of contact. The howitzer was destroyed with a guided missile.

Fake news: The use of the Bayraktar UAV is an attack and a provocation carried out by the Ukrainian side

Pro-Russian media argued that Ukraine deliberately provoked Donbas to escalate. And that the Bayraktar UAV was used for attack, not defense.

“The situation near Hranitne is not so clear-cut. Shortly before, the Armed Forces had taken control of the nearby village of Staromaryivka, in a neutral zone, while the heavy shelling on the non-government controlled village of Telmanove came from Hranitne. Therefore, the defensive use of the Bayraktar drone in Ukraine’s overall offensive position looks questionable,” another Strana article claims.

The article makes an argument for the “offensive position” using two more manipulations: the AFU reportedly captured a prisoner, and the Command had earlier “allowed shooting not only in response,” therefore “withdrawing from the armistice.”

First off, the “prisoner” in question is a militant of the so-called “LPR” who was reconnoitering the AFU positions under the guise of minesweeping. He belonged to a unit within the “6th Separate Cossack Motorized Rifle Regiment named after Ataman Matvei Platov of the LPR.” The militant grossly violated the agreement because he had no right to be in the “gray zone,” in addition to being armed.

And secondly, Ukraine did not withdraw from the armistice. Ukrainian military were allowed to open fire in response to the occupiers’ attacks. That is when militants were already violating the ceasefire. Instead, the occupiers are constantly breaking the truce by firing on Ukrainian positions and periodically employing weapons prohibited by the Minsk agreements.

Ginning up false arguments, Strana tried to convince the audience that Ukraine had staged provocations to disrupt the certification process for Nord Stream 2: “Both this spring and today, the escalation goes alongside the issue of Nord Stream 2. Back then, on the one hand, it was about completing it, and on the other hand, about the US sanctions. It was eventually completed with no US sanctions imposed. Now, there is the question of certifying Nord Stream 2 in the European Union and putting it into operation. This process can take several months. If there is a strong escalation in eastern Ukraine, in Donbas, in that case, the process may be delayed even longer, which, against the backdrop of gas shortages in Europe, might bring back the subject of pumping Russian gas through the Ukrainian GTS again. And this is just what Bankova has been after in recent days, even offering discounts and the volumes to pump beyond the contract.” 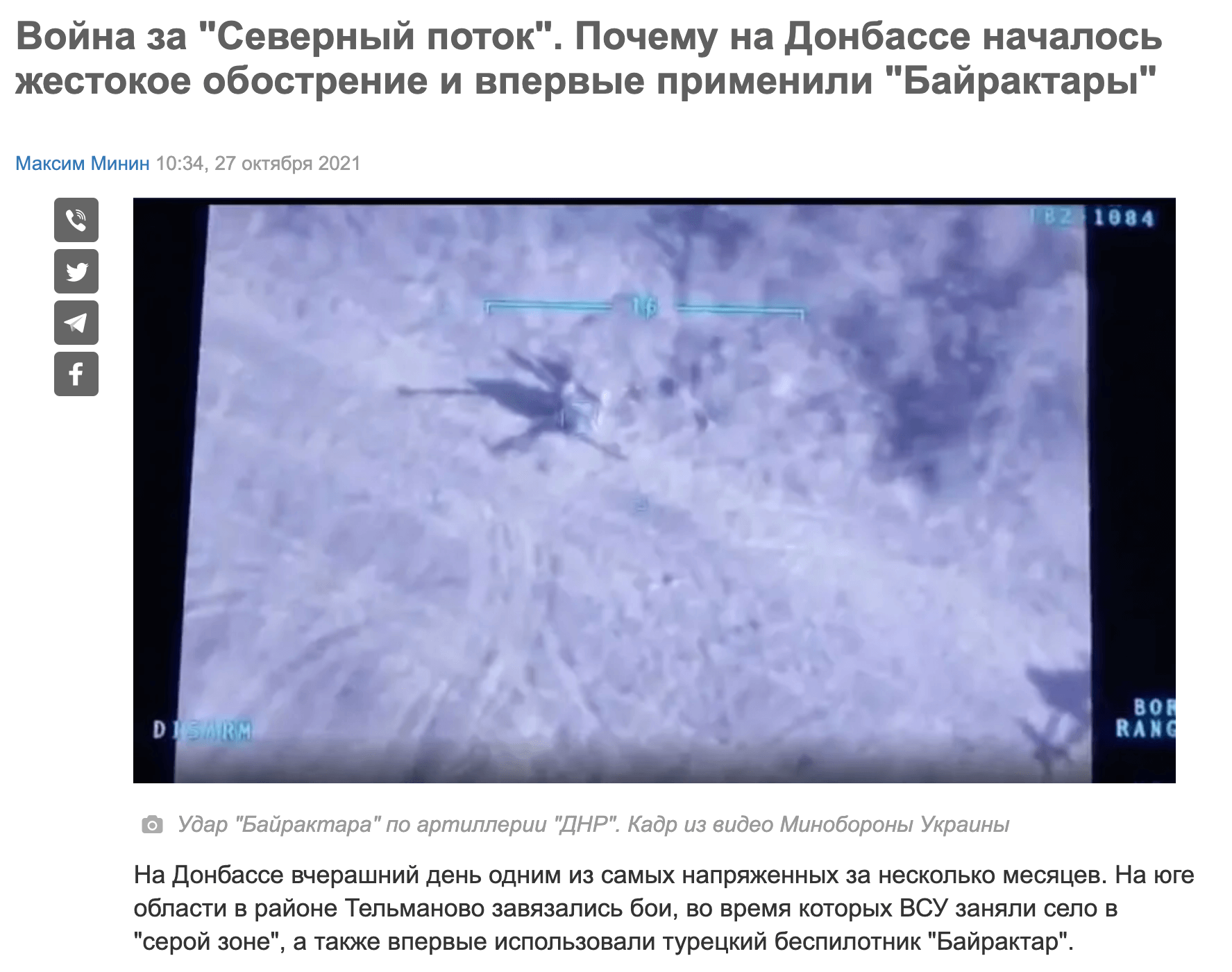 Translation: The War for Nord Stream. Why the severe escalation of the conflict in Donbas began, and “Bayraktars” were used for the first time.

Yesterday was one of the most arduous days in several months. In the south of the region near Telmanove, battles were engaged during which the AFU took control of a village in the “gray zone” and used the Turkish Bayraktar UAV.

Klymenko Time wrote that the Bayraktar UAV was not used for defense, but Zelensky’s PR among the military. “What does that mean?” First of all, the Ukrainian side does not want to seek a peaceful settlement, buying equipment and beginning to learn how to use it as part of a new warfare strategy. Secondly, the situation is clearly starting to “get hotter,” and it is not yet clear whether it is a prelude to a full-fledged conflict or just a situational unfreezing to create a news hook. For instance, there are rumors that they are willing to raise the President’s rating among the military in this way,” Klymenko Time writes.

It never happened, but here we go again: OPFL’s fake stories about fascism in present-day Ukraine

On the 77th anniversary of Ukraine’s liberation from the fascist invaders, pro-Russian TV channels threw in new fake stories about Nazism and fascism in today’s Ukraine. “Today fascism’s been revived in Ukraine, today Ukraine is the cradle of fascism in Europe. Today, fascism is being financed, popularized, and supported by our country’s authorities…, ” Illia Kyva, an MP from OPFL, said on-air in a program on First Independent.

The websites of Medvedchuk’s pool circulated numerous paid stories on how the OPFL party honored the memory of the victims of World War II, as well as statements made by this Party‘s members about “preventing the revival of fascism in Ukraine.” Pro-Russian media outlets referred to World War II as the “Great Patriotic War,” supporting the Russian myth that the Soviet Union is not responsible for unleashing the war as much as Germany. 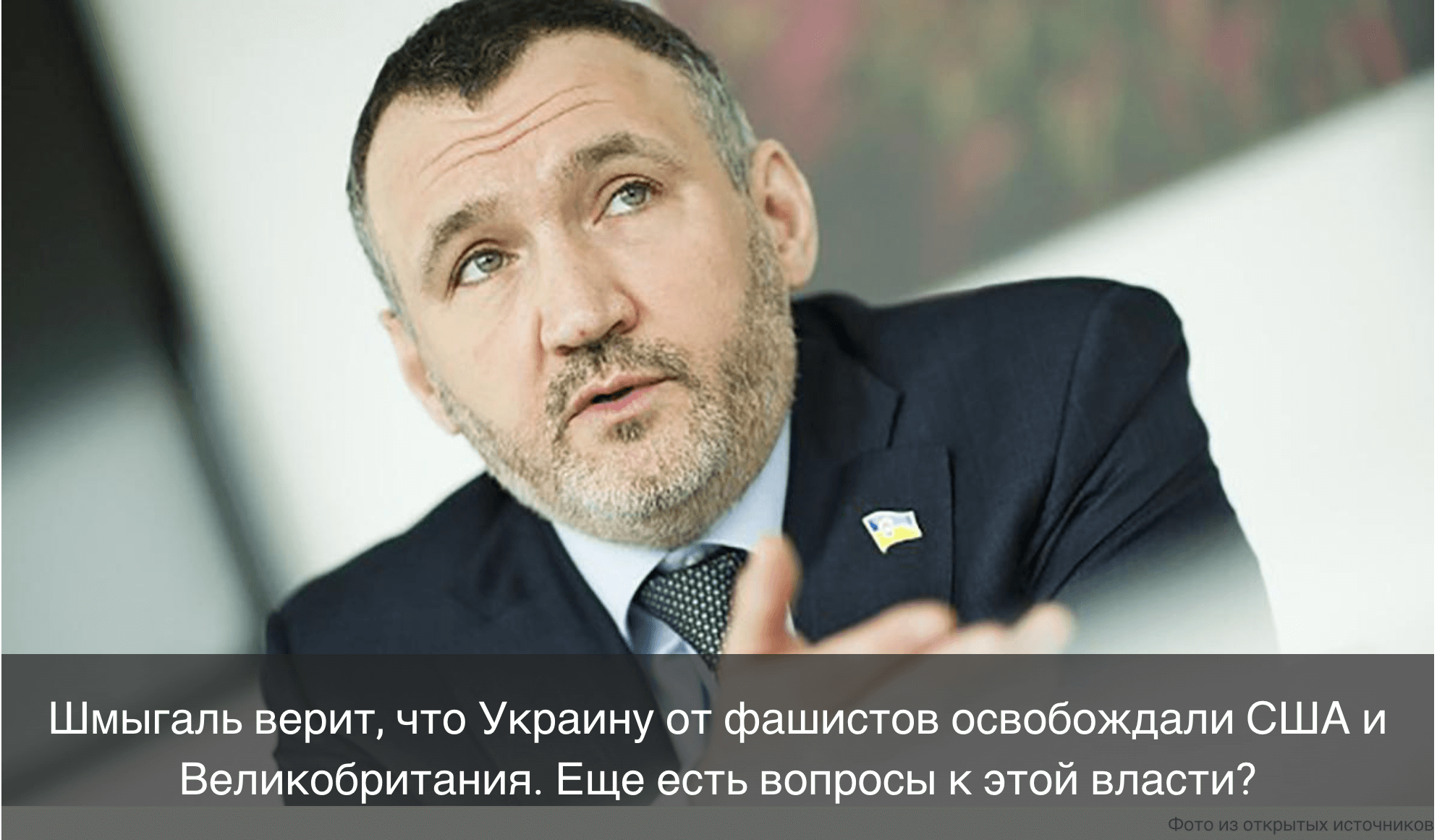 Translation: Shmyhal believes that Ukraine was liberated from the fascists by the USA and the UK. Any other questions for this government?

Pro-Russian media and politicians have traditionally maintained the myth of Russian historiography that Ukraine was liberated from the Nazi occupiers only by the Red Army, without the help of the anti-Hitler coalition. However, such assistance was primarily material. The Allies helped locally by bombing Nazi Germany and its allies and globally by opening a second front. The Red Army is often mistakenly called Russian, although it comprised representatives of all the Soviet republics.

This myth is one more way to deny the participation of the Ukrainian liberation movement (OUN and UPA) in the fight against the Nazis in Ukraine. Because, according to the Soviet playbook, the members of nationalist organizations were also identified as Nazis. In Soviet times, it was done to justify repression of the OUN-UPA members, and today, it is done to discredit the nationalist movements in Ukraine. And by this, to justify Ukraine’s refusal to “make peace with fraternal Russia” – not because Russia has occupied 7% of our territories, but because official Kyiv is arguably playing into the hands of the Ukrainian far-right.

VoxCheck searches for fake news and manipulations to debunk them. The “click and check” method lies at the core of our fact-checking. Anyone can check our argumentation and sources. Fact-checking can only be based on open data with relevant links. A fact-checked article can only be published if signed by two members of the editorial board.