We analysed data from Twitter about the recent firing of Mr. Borovik in the two weeks following the event, from May 13 – May 30. The very good news is that there is substantive diversity of opinions. Furthermore, the media and possibly bot farms are unable to dominate the discussion. Their influence appears to be limited to the timing of the debate and the initial sentiment.

In particular, negative messages tend to originate from accounts with many followers (media and opinion makers) and accounts with few followers (possibly bots). Nevertheless, the average sentiment about Borovik, normalized by the number of followers, is neutral. We know very little about how information spreads on the social networks. Yet, as the following anecdote suggests the interested parties can attempt to sway public opinion using infusion of sentiment on social networks. 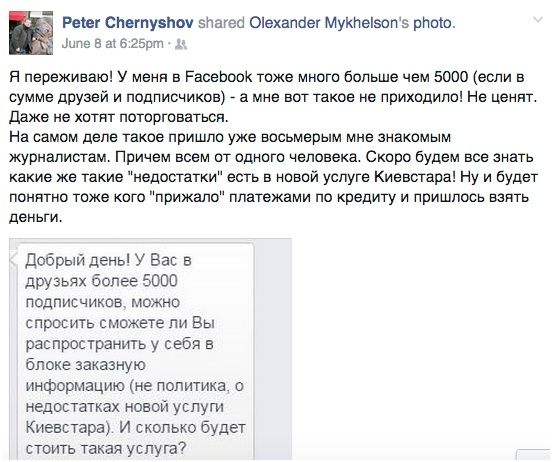 We use the Borovik scandal as a convenient case to study public discourse on the Internet. The case started on May 14 when Mr. Borovik went public about quitting the Ministry of Economics of the Ukrainian government. 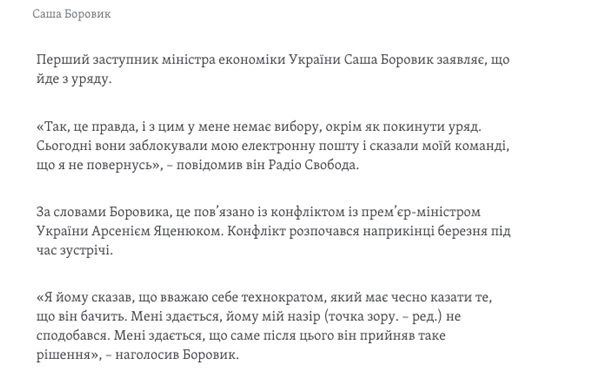 It immediately turned into a high profile media event and Mr. Borovik appeared on all prime TV shows and gave numerous interviews to the media. By contrast, government officials remained quite reserved, with the Prime Minister dismissing the issue and the Minister of Economics providing an uninformative Explanation.

Mr. Borovik’s case was a firecracker. It captivated the internet and media for two weeks, and then it burned out. Allegations and rumours bordering on conspiracy theories flew left and right. For a while, it was unclear whether Borovik was appointed or not, and the ministry was accused of editing its website with news about Borovik’s appointment. 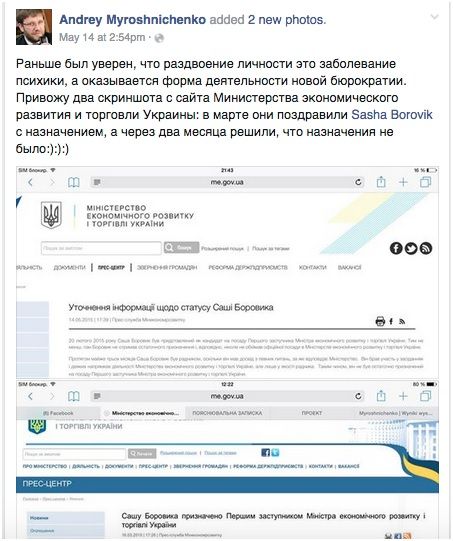 Then, there were articles belittling Harvard’s education of Borovik, and his CV more generally. Rumours circulated about a personal conflict between Borovik and Prime Minister Yatsenyuk. Some suggested that Borovik was threatening to the Prime Minister because of his proposal to make the government more accountable about the use of foreign donor funds. Others implied that Borovik’s resignation is a symptom of incompetence of the government, and lack of understanding of “big picture”. There were hints that Borovik is not a team player, is prone to conflicts, and lack substance or required technical knowledge. Finally, it became known that (long ago) Borovik studied in a KGB school, providing a possibility for a perception of his connection with Russian secret services.

Finally, in an intriguing twist in mid-June, Borovik joined the team of the new Odesa governor Mikheil Saakashvilli.

What judgement does the Internet pass of the scandal with Mr. Borovik? Does it rule Borovik as good or bad? Has anyone attempted to manipulate the judgement of the Internet? If so, were they successful? What was the role of media? Can they shape the discourse on the Internet? Who are the leading influencers among the media and the bloggers.

In our analysis, we focus on Twitter posts regarding the dismissal of Borovik. In the case of Borovik, Twitter is big! Figure 2 reveals that Twitter messages about Borovik in our data dominate other social media platforms.

What have we found?

FACT 2. If adjusted by the number of followers, the average sentiment is neutral.

These facts can be explained in several ways. There is a possibility that bot farms with few followers tried to manufacture negative sentiment about Borovik. An alternative explanations that individuals who are not very well integrated in the social media tend to have a negative opinion about Borovik. We cannot think of a reason why there would be a systematic bias against Borovik among individuals with fewer followers. We, however, have not analyzed this issue in detail and do not have a conclusive proof about which explanation is more likely.

In order to estimate the actual reach of the tweets, we normalized the number of tweets by the number of followers. Thе picture changes significantly (Figure 3).

We can think of two plausible explanations: either the negative messages were pushed by bots (software managed accounts with few or no followers) or they were shared by people who are poorly integrated in social media space and, therefore, were not likely to reach others with their concerns. In both cases, the influence of the negative perception of Mr. Borovik in public space is much smaller than the number of tweets would indicate.

Figure 3. Controlled for followers analysis showed that real negative opinion about Borovik is much smaller and often outweighed by positive messages

Figure 4 offers aggregate statistics. The barcharts reveal overall number of positive, negative, and neutral perceptions in the raw data and the data weighted by followers. The number of negative perception of Mr. Borovik is lower among active internet users who have better capacities to share their views.

Figure 4. Mentions vs mentions weighted by followers of Borovik. While mainly negative messages were tweeted, neutral messages were more likely to reach the audience when compared to negative Messages