Can (Not) Wait: Acceleration of Reforms Despite Quarantine | VoxUkraine

Can (Not) Wait: Acceleration of Reforms Despite Quarantine

The Q2 was marked by two long-awaited reforms — laws on insolvency of banks and on the circulation of agricultural land, which brought to Ukraine a new program with the International Monetary Fund and a $2.1 billion tranche. Unfortunately, the political pressure towards the NBU and letting go it’s head, Yakiv Smoliy, put the continuation of the cooperation with the IMF into question. Therefore, Ukraine has once again taken a step back on the path of reforms.

The most controversial reform of the quarter

The Cabinet of Ministers will determine the administrative centers and territories of communities on the basis of long-term plans (the range of estimates from -3.0 to +2.0 points, the overall score of 0.1 points, iMoRe 134). As of January 10, 2020, 1,029 amalgamated territorial communities with a population of 11.7 million people were created in Ukraine. In the spring, in order to prepare for the local elections scheduled for the fall, the Verkhovna Rada passed a law that shifted the decentralization process from a voluntary to a forced stage. Now the united territorial communities will be formed on the basis of long-term plans approved by the Cabinet of Ministers. According to experts, about 120 communities that do not meet the requirements of the Methodology for Forming Capable Territorial Communities have not been included in the updated long-term plans of the Cabinet of Ministers. Based on the Government’s decision on community boundaries, the Central Election Commission is to form constituencies for the October 2020 elections.

Experts have reservations about the validity of the criteria in the Methodology of community formation. In particular, is the population and the distance from the center to remote parts of the community so important (it should be no more than 20 km or no more than 30 minutes of ambulance or fire)? In mountainous areas, these two requirements may contradict each other. And Mykolayiv and Dnipropetrovsk regions are leaders among violators due to poor quality roads, which make it impossible to transport from the center of ATC to remote villages faster than 30 minutes. Another controversial issue is the share of local taxes in the budget. Communities are not responsible for the administration of local taxes (this is done by the tax authorities), and the maximum rates of local taxes and fees are set at the national level. Thus, following the Capacity Methodology, the CMU can disband those communities that were pioneers of decentralization and set an example for others. This will reduce people’s confidence in both the central government and reform in general.

Another controversial issue is the fate of districts — whether to leave an auxiliary unit of administrative structure between the levels of communities and districts. Opinions of experts differed (on July 17, the Verkhovna Rada adopted a resolution on the formation and liquidation of districts  which reduced the number of districts from 490 to 138).

It is for these reasons that we have recorded such a discrepancy in estimates.

What has changed in key areas?

In this area, 12  important regulations were adopted, 9 of which were initiated by the National Bank of Ukraine. The average score of the reforms is +1.3 points. In addition to the law on appeals against decisions on insolvency of banks and the decision on the management of troubled assets of state-owned banks, experts noted the following important events:

In the two months of spring and early summer, the government and parliament passed 11 laws and regulations driving public administration reforms. The main reformer in this area was the Cabinet of Ministers of Ukraine — on its account 6 regulations. The average score of the normative act was +0.9 points. Among the main, in addition to the above-mentioned regulations on troubled assets of state-owned banks and the law on geospatial data, are:

In the second quarter of 2020, 9 laws and regulations were adopted that affected the sphere of public finances, 6 of which were initiated by the Cabinet of Ministers. The average score of the normative act was +0.9 points.

In the second quarter, the National Commission on Securities and Stock Market and the Pension Fund of Ukraine joined the traditional initiators of significant changes — the NBU, the Cabinet of Ministers and the Verkhovna Rada.

Thanks to the joint efforts of the authorities, the pace of reforms has almost doubled: the average score of the round increased from +0.45 (in the previous quarter) to +0.76 points. The reform index during the period ranged from 0.2 points to 1.4 points.

Among a number of regulations signed during this period, the experts of the Reform Index selected 35 that should significantly change the “rules of the game” in the country (32 regulations were selected in the 1st quarter). The average score for the reform was +1.2 points from the range of —5 to +5 (+1.0 points in the previous quarter). The greatest progress in terms of assessments of individual reforms has been made in the area of Monetary Policy. Public finances and Governance lagged slightly behind. In the second quarter of 2020, we did not record any anti-reform.

Most of the reforms were implemented by regulations of the Cabinet of Ministers of Ukraine — 13, 9 more reforms were initiated by the Verkhovna Rada and the National Bank per each. For the first time in a long time, the list of reforms includes separate initiatives of the Ministry of Education and Science, the Pension Fund and the National Commission on Securities and Stock Market. 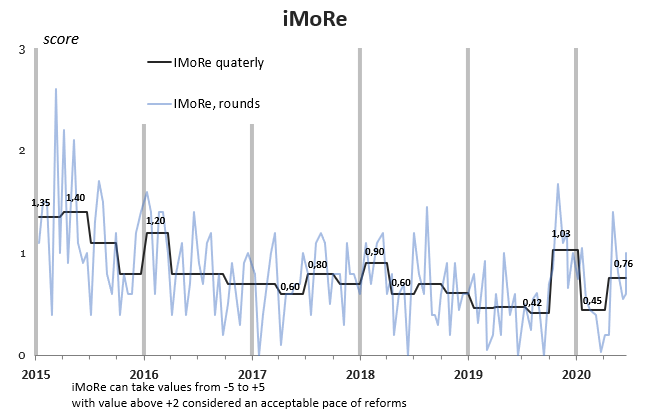