Some of the tight capital controls introduced earlier this year recently were loosened by Ukrainian central bank, but the bulk of regulations will stay in place at least until September 2015. Yuriy Gorodnichenko argues that using capital controls without doing serious reforms to address the fundamental problems is not going to be helpful for Ukraine and can aggravate Ukraine’s problems in the long run.

Earlier this year, the National Bank of Ukraine (NBU) introduced tight capital controls and exchange rate restrictions to address temporary external imbalances, to tame panic in the foreign exchange market, and to stabilize disorderly market developments. The International Monetary Fund (IMF) signed off on this important policy step. Recently, the NBU loosened some of the controls but the bulk of regulations will be in place at least until September 2015. Again, the IMF gave its blessing. What does this policy mean for Ukraine? Is it going to hurt economic growth? Will it make Ukraine’s economy more fragile and vulnerable? In simple terms, is it a good thing for Ukraine now? There are many myths about capital controls and this post aims to clarify some key points.

Myth #1: Capital controls are bad always and everywhere. Not true. Recent theoretical and empirical research suggests that temporary capital controls can be a powerful tool able to stabilize the economy. For example, a recent survey done by IMF economists and Korinek (2011) argue that free capital flows can make a small open economy—like Ukraine’s —vulnerable to sudden stops (that is, quick reversals of capital flows in times of panic), undermine stability of the economy’s financial sector, put the real sector of the economy under considerable pressure, and generate unfavorable trade-offs for policymakers (that is, situations when the government has to choose between policies with “bad” and “worse” outcomes). Indeed, free mobility of capital is like driving a fast car: it can take a driver quickly to where he wants to go but it can also kill the driver if he is not careful. Temporary capital controls can reduce the risk of such adverse effects by introducing “breaks” to the car so that the driver does not run into a tree. One way to implement the breaks is to have capital controls for inflows that in booms, impose a tax or a restriction on inflow of capital and capital controls for outflows that in recessions, impose a tax or a restriction on outflow of capital. Indeed, a typical problem in emerging economies is that inflows of short-term capital during boom years can feed asset bubbles and outflows of short-term capital during recessions tend to make crashes much harder. Capital controls can attenuate such flows and thus make the economy more stable and resilient. So the efforts of the NBU to limit the outflow of capital may be a reasonable policy. 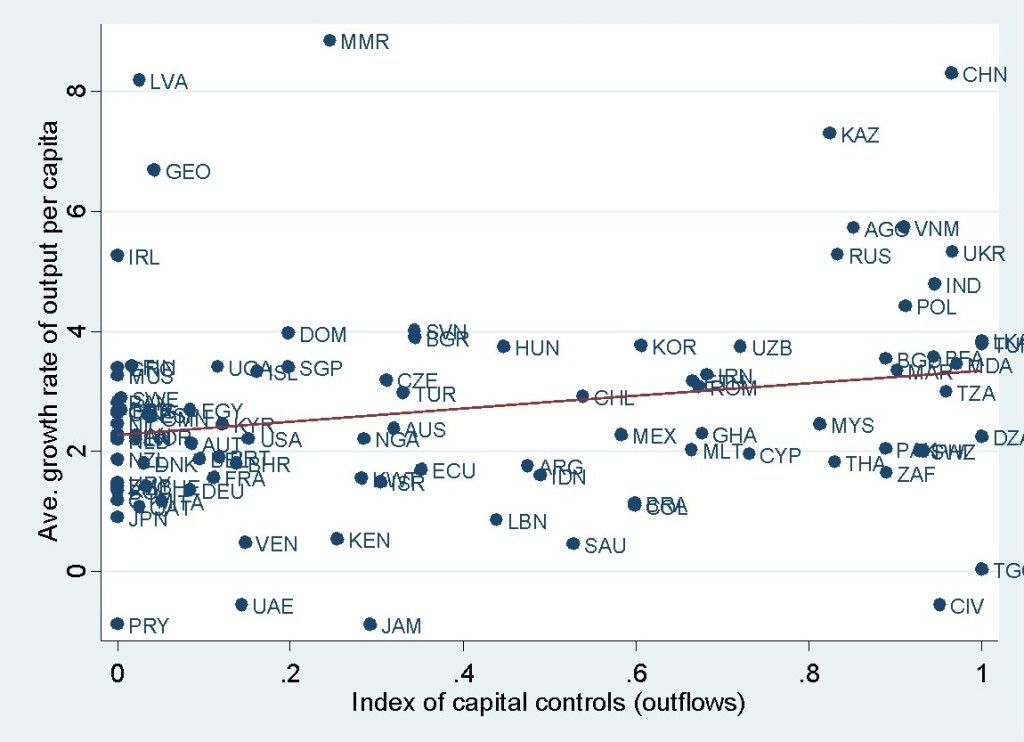 Notes: Data are from Fernández et al. (2015). A high value of the capital controls index means that capital controls are strong. The horizontal index show the average level of controls for capital outflows. The vertical axis shows the average growth rate of output (at purchasing power parity: source: Penn World Tables) per capita. The sample period is 1995-2006.

Myth #3: There has been a global decline in capital controls and Ukraine is an outlier relative to other countries. Partly true. Indeed, there has been a liberalization of regulations on capital flows, but there is a lot of heterogeneity in this process. Figure 2 shows the time series of the index of capital controls as measured in Fernández et al. (2015) for Ukraine, Poland, China and the average for the pool of post-Socialist countries. Clearly, the index averaged across post-Socialist countries has been falling but Ukraine, Poland and China have been similar in terms of the scope of capital controls: high and persistent. China has had particularly tight capital controls for decades and yet it grew at light speed. Likewise, the Polish economy has been a remarkable success story in Eastern Europe. The example of Poland demonstrates that capital controls in Ukraine may be viable policy. Also note that given the history of controls in Ukraine it is unfair to claim that Ukraine somehow moved from free capital mobility to very restricted capital mobility 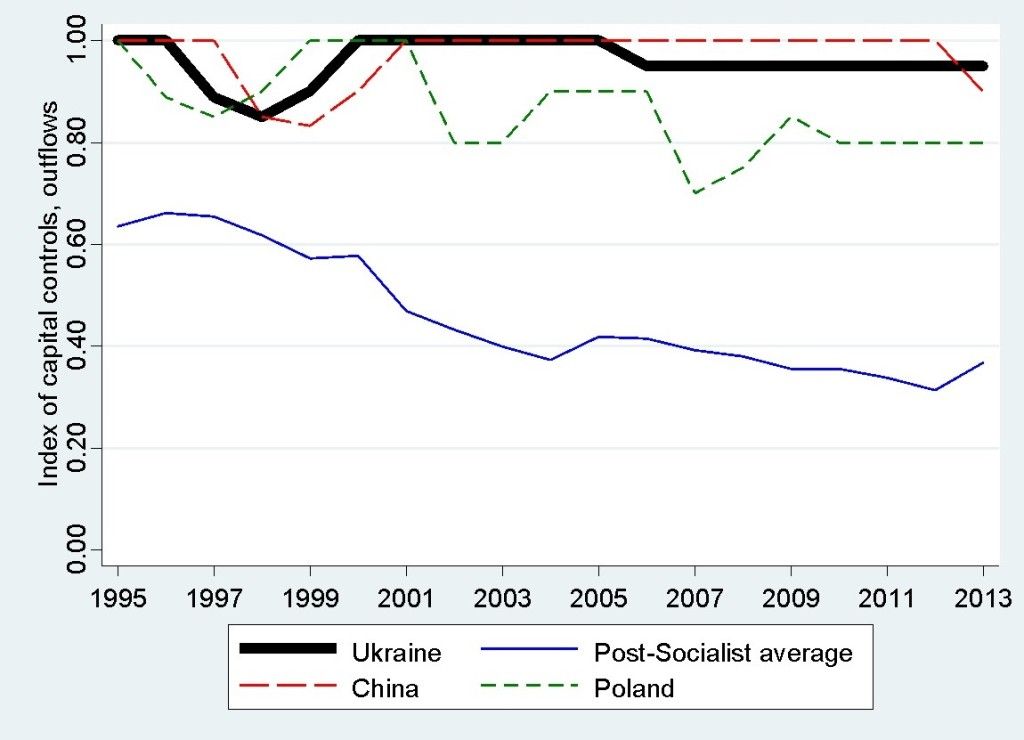 Myth #5. Countries do not use capital controls to address their external imbalances and Ukraine did something extraordinary by implementing capital controls. Not true. Figure 4 plots time series for output and capital controls for Iceland and Greece. Like Ukraine, both countries had major external imbalances just before the Great Recession. A massive run on the banking systems of these countries and capital flight brought an economic catastrophe to Greece and Iceland. To prevent further meltdown, the governments of both countries—with the blessing from the IMF—imposed tight capital controls. Given the current understanding of crisis dynamics, what Ukraine did was a fairly standard move.

Figure 4. Dynamics of output and capital controls for selected countries during the Great Recession 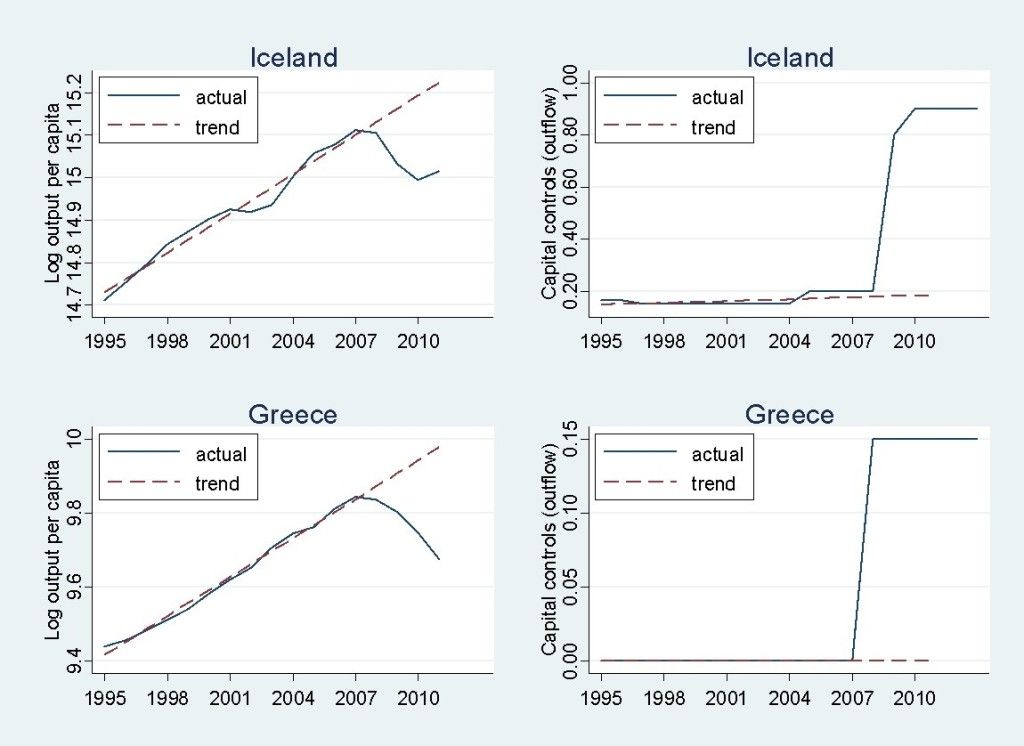 In summary, economic theory and evidence suggest that, while free movement of capital in normal situations is beneficial for a country, policymakers can and should use capital controls in times of crisis and as a macro-prudential tool (that is, use capital controls to prevent economy from overheating and taking excessive risks). In fact, Keynes said in his 1933 speech in Dublin, “I sympathize … with those who would minimize rather than those who would maximize economic entanglements among nations. Ideas, knowledge, art, hospitality, travel – these are things which should of their nature be international. But let goods be home-spun whenever it is reasonable and conveniently possible and, above all, let finance be national.” So there is nothing evil or surprising in the fact that the NBU used capital controls in the current conditions.

Mainstream economic theory is clear that capital mobility is desirable in many ways: it improves diversification of risks, enhances allocation of resources, and facilitates the flow of ideas and technology. My colleague Maurice Obstfeld, a father of modern international economics, observed, “The way to maximize net benefits [of free capital mobility] is to encourage economic integration while attacking concomitant distortions and other unwanted side-effects.”Therefore, very tight capital controls should be used only sporadically, as a temporary measure.

Thus, the NBU should eventually lift most of the controls and, instead, introduce a flexible system of regulations, reserve requirements, taxes, etc. that limits dangerously high levels of capital flows but do not interfere with the good functions of capital flows. The NBU signaled that the capital controls will be relaxed, which is a welcome policy step. Unfortunately, it is less clear if the NBU has a plan to introduce a system of capital controls to prevent future suddens stops and meltdowns.