Contradictory: an Overview of Reforms in the 3rd Quarter of 2020 | VoxUkraine

Contradictory: an Overview of Reforms in the 3rd Quarter of 2020

Among all the regulations issued by the state authorities, iMoRe experts picked out 50 reforms (compared to only 35 reforms in the 2nd quarter). However, a reform’s average score fell slightly, from +1.2 points to +1.1 points.

This is due to the antireforms, and to the fact that many important laws included both positive and negative features, yielding an average score of 0 points.

✓ Specifically, the new Electoral Code (iMoRe 139, 0.0 points). It was needed to complete decentralization and conduct local elections. However, it introduced the complex design of open lists, a rather high electoral quota to change the position on the list (25%) and the parties’ right to recall local deputies, creating a risk of political pressure on them.

✓ Another law that received 0.0 points is the law allowing the use of state budget funds to repay local budgets’ debts connected with construction of roads (iMoRe 138). On the one hand, it can accelerate infrastructure modernization at the local level, on the other hand,  encouraging local authorities to take on excessive debt they are unable to repay. This will increase the pressure on the state budget that already has a significant deficit this and next year.

✓ Because of opposite assessments, introducing a fee per air passenger and per ton of air cargo (iMoRe 140) was also given 0.0 points. Some experts negatively assessed the law as affecting the cost of air transportation, with some providing a positive assessment because it resolved a legal conflict: according to the Constitution, fees can be regulated only by a law passed by the Verkhovna Rada, while in actuality, it was done by the Cabinet of Ministers.

✓ The long-awaited law of Ukraine on the organization and conduct of gambling (iMoRe 141) received the same assessment. Some experts assessed the law positively as it helps bring this activity out of the shadows, and some negatively because of the perils of gambling addiction. Since, apart from creating a register of those addicted to gambling and denied access to casinos and slot machines, the law does not contain any other safeguards against catastrophic losses, such as cutting the maximum bet or setting a cooling off period, i.e. the time between a player’s bets and losses.

✓ The Verkhovna Rada passed the law on the regulation of the derivatives market (iMoRe 141, +3.0 points). In comparison to the previous securities and stock market law, it includes an important innovation: the compulsory implementation of concluded agreements. A party to a derivatives contract used to have an option to waive implementation, if it was unprofitable. This created distrust in such agreements. In addition, the new law will give impetus to the development of commodity exchanges and allow producers to hedge the risks of falling costs of raw materials by concluding agreements in advance. The law also includes a legal controversy: if a joint-stock company’s equity is less than its authorized capital, the placement of shares is prohibited (formerly, only public offering was prohibited). In practice, this can lead to a paradox.

On the one hand, in case of significant losses, a bank’s owners are obliged to financially support it, i.e. infuse capital. Because banks are joint stock companies, it is done through a private placement of shares. On the other hand, losses reduce the bank’s equity that may become less than the authorized capital, depriving the bank of the right to place shares.

✓ The Cabinet of Ministers updated the Procedure for creating hospital districts with support health care facilities (iMoRe 139 , +2.5 points). If the support hospitals used to be approved by hospital councils, now it is a function of the Cabinet of Ministers. The resolution also patched up the legislative “holes”, formalizing the concept of “support health care facilities” and clearly defining the quantitative and personnel composition of hospital councils (now, it has to include representatives of regional state administrations and regional councils). Overall, the updated Procedure strengthens the participation of the central government in the development of medical networks.

✓ The experts rated the attempt to monetize the “baby package” program launched in 2018 (iMoRe 142) at -1.0 points. Instead of a box containing basic necessities for their child, the parents were to get a bank payment card with UAH 5,000 in the account, which could be spent only in certain online and offline stores. This innovation significantly limited access to assistance for low-income families not using Internet and those living in rural areas. To get a card, a person had to pay several visits to a nearest bank branch that was often located in other settlement. The same applied to offline stores, located only in cities. The experiment was unsuccessful, and it was cancelled in early October.

✓ Despite the social importance of the law on the simplified procedure for admission of children from the temporarily occupied territories into Ukrainian universities, initiated by the President (iMoRe 138), this law was given -0.5 points by the experts due to a high risk of corruption. The law actually revived a long-forgotten practice of taking entrance exams directly in an educational institution, where it is not possible to check whether the entrants really passed the exams without outside help, ensuring the same assessment of the entrants’ knowledge in different higher education establishments.

What changed in the key areas?

According to the sum of individual event assessments, the greatest progress was made in the business environment. Events relating to monetary policy and public finances scored twice as low. 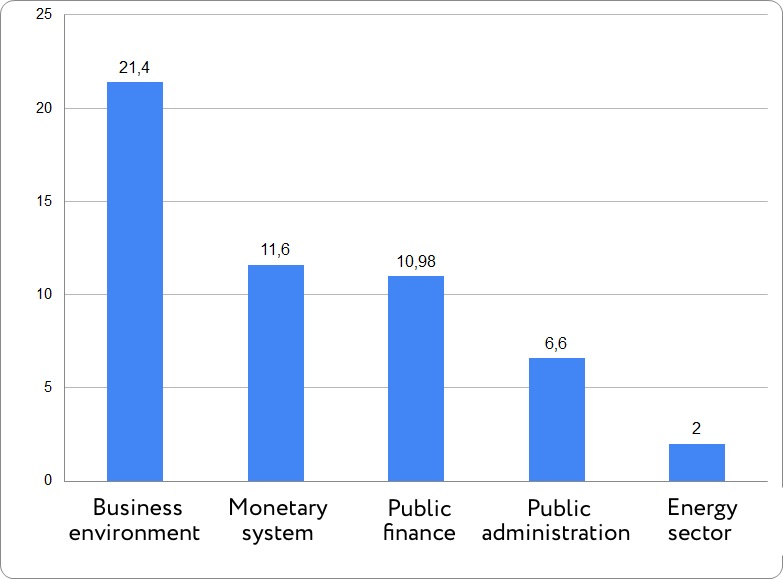 22 regulations that are important for reforms appeared in this sphere. Twelve of them were initiated by the Parliament, with the other ones coming from the Cabinet of Ministers and some ministries. Three reforms received a score of +2.0 points. They relate to patent law and international trade:

✓ reform on the patent legislation (+2.0 points, іМоРе 141). Previously, Ukrainian legislation protected utility models better than inventions. This created a legal gap where applicants could “circumvent” intellectual property rights on inventions by acquiring utility model rights and prohibiting the use of a product or production method, existing in the world for a long time. For example, there were “patent trolls” who registered a patent for the design of matches or door handles and then blocked the import of these items at customs, waiting for the importer to pay for the permit. The new law should resolve this issue by introducing a list of objects that can be inventions or utility models, as well as the possibility of the prompt termination of a patent obtained by an unscrupulous holder.

✓ classification of goods of foreign economic activity was brought in line with the classification of the World Customs Organization (iMoRe 138 , +2.0 points). Most of Ukraine’s main trading partners (EU, China, Canada, etc.) started using this version on January 1, 2017. Before Ukraine joined the current classification,  there had been difficulties in clearing goods through customs due to the difference in the product codes of Ukraine and its partners.

Over the three months, the National Bank of Ukraine (5), the Verkhovna Rada (1) and the National Securities and Stock Market Commission (1) adopted seven reform regulations, two of which received a score of more than +2.0 points. These are:

In the field of public finance, the experts found sixteen significant changes in the “rules of the game”. Ten of them were initiated by the Government and individual ministries, five by the Parliament, and one by the President. It is this direction that includes two counter-reforms: changes in the terms of admission to educational institutions for children from the TOT, and monetizing the “baby package”. Yet, there were significant positive changes too:

In the third quarter, the main initiators of reforms traditionally were the highest legislative and executive bodies, i.e. the Verkhovna Rada of Ukraine (20 reforms) and the Cabinet of Ministers of Ukraine (16 reforms). The National Bank came third with five reforms. The ministries were also quite productive, with their orders being part of the reform list.

Graph 2. Initiators of reforms in the 3rd quarter of 2020

Initiators of reforms included in the Index for Monitoring Reforms No.138-144

The Government managed to keep up the pace of reform. Compared to the previous quarter, the average score of the round hardly changed, being +0.73 points (cf. +0.76 points in the 2nd quarter of 2020). During this period, the iMoRe values ranged from 0.5 to 1.2 points. 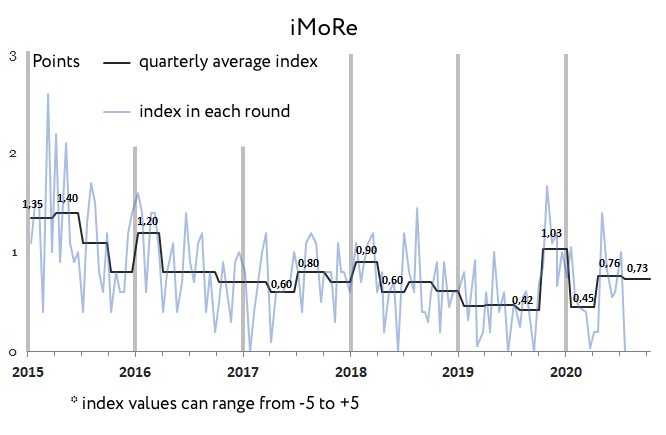