An overview of Twitter activities of ministries and other government bodies

Governmental use of social media in Ukraine is quite different from Western practices. First, Facebook dominates the domain of the social media communication. Second, even high level officials keep wasting their time in numerous battles of arguments, creating their echo-chambers and believing that their 5,000 friends represent the whole country. Western governmental and business organization typically (and Donald Trump is one of the most known exceptions) follow strict social media discipline, are mostly newsmakers and do not engage in arguments, make use of multiple social media channels with a slight preference for Twitter.

Among others, the US governmental organizations have proven successful use of social media to raise public engagement. For example, the Centers for Disease Control and Prevention succeeded in alerting and informing the public about peanut salmonella outbreak in 2009 via Twitter. Some other authorities have also efficiently used social media to listen to the public’s voice and opinions. As an illustration, the United States Geological Survey used Twitter to request public opinions of an earthquake to have a complete picture of what people really experienced. Another example is the US Department of State’s use of the hashtag #AskState in Twitter to collect questions from citizens for speakers to answer during live events.

Ukrainian state institutions have been quite successful in adopting Western technologies over the last 5 years. For instance, the National Bank of Ukraine is more effective in Twitter communication than some central banks of the Eurozone. It is not surprising that most Ukrainian government departments (17 out of 19 ministries) have used Twitter as a part of their public engagement. A few exceptions include Ministry of Culture and Ministry for Veterans Affairs which have not had official Twitter accounts; and Ministry of Youth and Sports the account of which  has been inactive since January 2013. However, there is a clear disparity in the tweeting activities of ministries’ Twitter accounts: some are quite active in tweeting while some occasionally update their accounts. For example, Ministry of Internal Affairs and the Office of the President are very active in creating their own tweets with respectively 749 and 481 tweets created over the last 3 months (24 March to 24 June 2019). During this period, Ministry of Foreign Affairs and Cabinet of Ministers are leading in retweeting with 743 and 324 retweets respectively. Meanwhile, Ministry of Social Policy has not updated its account, and Ministry of Regional Development, Construction, and Housing updated it once a month on average.

To have an effective communication in Twitter, users within a network must stay connected i.e. follow each other. Following function helps users keep track of the most recent tweets and Twitter activities of accounts which they follow. At the same time, being followed allows users to spread information and news to members of their follower networks. Unfortunately, our follower – following network analysis shows a weak interconnectedness among ministries: most of the time, the connection between two ministries is a one-way relationship (Graph 1). For instance, Ministry of Temporarily Occupied Territories and IDPs follows 13 ministries of which only 2 ministries follow this Ministry account in their turn. Another example is the case of the Presidential Administration: this account is followed by 12 fellow state institutions’ accounts but it does not follow any of the fellows. The opposite case is the accounts of Ministry of Energy and Coal Mining and Ministry of Ecology and Natural Resources which are not followed by any of other government bodies’ accounts. That being said, there are some slightly “more popular” accounts such as the account of the Ministry of Education and Science, which has 2-way relationships with 5 ministry accounts. 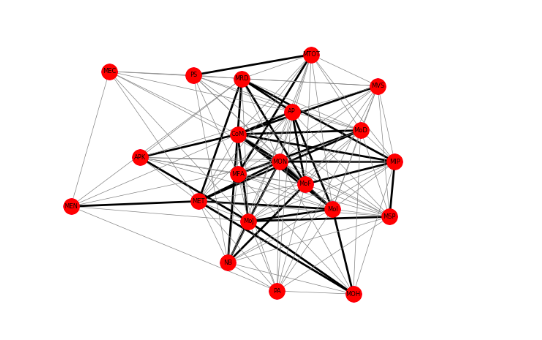 Further, one would expect to see structural changes in the network when there is a change in the government i.e. the inauguration of the new president. However, again, this is not observed in the network of Ukrainian government bodies. Although it has been 2 months since the Presidential Election, the President Zelensky’s account is followed by only 3 Ministries, which is only one third of the number of Ministry followers of the former President Poroshenko. Likewise, the President’s account does not follow Twitter accounts of any government organizations.

In addition to following-follower networks, effective coordination can also be achieved through mentioning and retweeting. Through these activities, users can initiate or take part in dialogues, as well as show agreement with opinions spread by others. Thus, utilization of these tools would allow government bodies to show support for each other and enhance direct engagement not only between ministries but also between ministries and citizens. Yet, the interaction through mentioning and retweeting among Ukrainian ministries is rather weak: government accounts rarely mention or retweet their fellow ministries. On average, there are only 9 mentions and 39 retweets out of 1000 most recent tweets in a ministry account’s timeline. Remarkably, Ministry of Ecology and Natural Resources, despite 3 years of Twitter activity, does not engage in retweeting or mentioning other ministries at all. Other accounts that are inactive in inter-ministry retweeting include Ministry of Social Policy and Ministry of Energy and Coal Mining. This inactivity is not surprising since they are relatively isolated from others in the following-follower networks. To the contrast, being the center of the following-follower network creates a high degree of popularity for the Ministry of Education and Sciences account, and thus it is also the center of the retweeting-mentioning network. 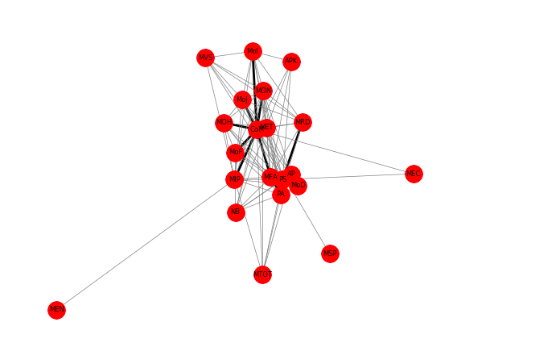 Notes: The graph is based on the total number of mentioning and retweeting each other. Red nodes represent government bodies. The bold lines mean the total number of mentions/retweets between two nodes is greater than 20 and the thin lines represent the opposite case. The length of the line represents the connectedness between a node and the rest of the network. The longer length indicates that a node is relatively more isolated from other nodes. Please consult Appendix for abbreviations.

To this end, we have documented the lack of effective coordination in Twitter among government organizations. We have also suggested that it is important for ministries to communicate in Twitter more efficiently as it will allow them to improve their image as well as communication with the public. The latter benefit is indeed found in our examination of the effect of inter-ministerial retweeting on public engagement on a sample of 40,489 tweets made by Ukrainian state organizations’ accounts since February 2014. More specifically, the number of public retweets is 88% higher for a tweet which is retweeted by at least one fellow ministry’s account compared to a tweet that is not retweeted by any of the fellow accounts. In other words, inter-ministerial engagement can boost the popularity of tweets and increase the level of public engagement by almost two times.

Overall, our analysis suggests the weak Twitter coordination across Ukrainian ministries. Nevertheless, their attempt to use Twitter as a communication channel deserves an applause, given that there are other ministries and government bodies that do not have Twitter accounts at all. All in all, there is a need for improvement in online communication, particularly in Twitter. This communication channel, if used effectively, can help prevent public relations crisis like the recent miscommunication between the President and the Ministry of Foreign Affairs in the future.