A broken system and close ties between institutions and politicians lead to questionable degrees for Ukraine’s political elite. The Editorial Board of VoxUkraine assesses corruption risks of institutions awarding academic degrees in Economics. 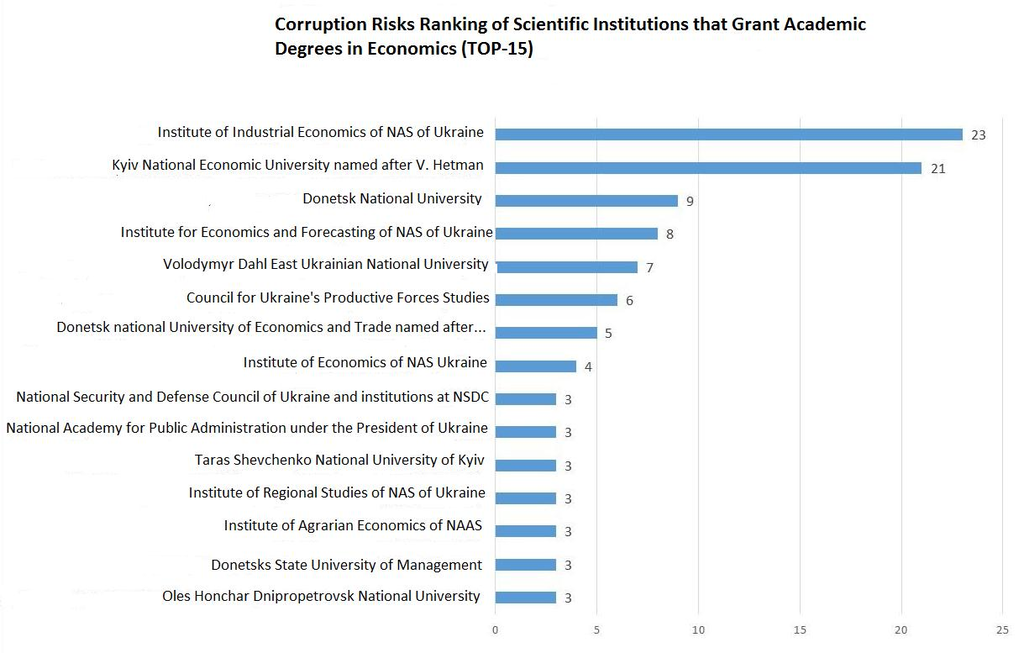 The word “academia” is typically associated with intellectual integrity and progress.  However this is not always the case in Ukraine, especially in the field of Economics.  There are several reasons including unwillingness to integrate into the world of the scientific community, a soviet-style system, nontransparent funding, and the loss of young talent.  However, the biggest issue is corruption, which has compromised Ukraine’s system of higher education. There is a common belief that academic degrees can be purchased and that academics will provide favorable and biased research to any paying customer.  One egregious example is the Doctorate of Economic Science received by former president Viktor Yanukovych, which became a national joke.  Meanwhile, Mr. Yanukovich’s son, as well as the ex-central bank Head of the country Serhiy Arbuzov, also received questionable degrees.

Ukrainian academics recently demonstrated a continued aversion to change during the elections of the National Academy of Sciences.  Boris Paton, who has been instrumental in creating the current system, was reelected as the organization’s chairman.  Also concerning was Serhiy Pyrozhkov’s election as one of the Academy’s vice-presidents.  As the first opponent in his dissertation defense, Mr. Pyrozhkov was a key figure in allowing Viktor Yanukovych to receive his Doctorate of Economic Science.

One of the reasons that this situation persists in academics is the lack of personal accountability among dissertation supervisors and opponents for their decisions in granting the academic degrees. Throughout the history of modern Ukrainian academics, neither the reputations nor the careers of the supervisors or the opponents of so-called “fake” doctors of science have been affected. They continue to teach youth and to squander taxpayer funds that are intended for the development of the sciences

We want to fill this gap by holding supervisors and opponents accountable. However, it is very difficult to prove corruption using publicly accessible materials. On the other hand, we can evaluate cases in which an applicant did not personally write a dissertation and was not engaged in its registration.  These cases provide indicators that the risk of corrupt activity is very high.  On the basis of these cases we will rank institutions awarding academic degrees in Ukraine according to corruption risks. The ranking represents the number of cases where the workers of this institution participated in decision-making process about awarding an academic degree under conditions of high corruption risks.

The methodology of ranking the corruption risk in awarding academic degrees is simple. First the selection of the defended dissertations with high corruption is formed. Based on the abstract of each thesis from a sample set we can determine the institution in which the thesis was prepared along with the supervisors/consultants and opponents. The institution receives + 1 point if (1) it is the place where a thesis was prepared, (2) where a supervisor or consultant of a thesis works, (3) where the opponent works. The number of points the institution receives determines its corruption risk ranking. The higher the ranking, the greater the risk that employees of this institution are involved in awarding academic degrees for bribes, or inappropriate benefits and privileges.

Corruption risks while defending a thesis are considered to be high if:

If an applicant fits any of four abovementioned criteria, his/her dissertation is included in the selection. For example, they fit certain criteria if during the thesis defense they hold a position of MP of the Verkhovna Rada of Ukraine, or if they are the Minister or the Deputy Minister, the Head of the civil service or the Committee, Assistant to the President, Chairman or Deputy Chairman of the regional administration, the Mayor, the head of the large enterprise. In such cases we believe that corruption risks when providing such academic degrees to the applicants are high. At the same time, high corruption risks does not necessarily mean that corrupt activities actually took place.

We will demonstrate the procedure for ranking calculation on the example of Serhiy Arbuzov’s thesis, which he defended in 2009. During the preparation and defense of the thesis, according to information resource Smida, he held the post of Chairman of the Board of Ukrbisnessbank. It is unlikely that while holding this position he was able to carry out a scientific research due to the fact that scientific work in the field of Economics entails processing a large amount of existing literature, as well as developing and evaluating a hypothesis. . This is completely different from administrative work and company management. If we look at ratings of the world best financial managers – none have received a doctorate while working at their current positions. Moreover, he was suspected of corruption while working as the Head of NBU and in the Cabinet of Ministers, and Interpol included him on its wanted list.

Therefore the possibility that Mr. Arbuzov got his academic degree thanks to corruption acts is very high.

Mr. Arbuzov’s abstract indicates that the thesis was prepared in Donetsk National University of Economics and Trade named after M.I. Tugan-Baranovsky. Therefore this institution gets +1 point. O. Papaika was Arbuzov’s supervisor, and he works at the same institution, so this institution again receives +1. Arbuzov’s opponents were N. Sheludko who works at the Institution for Economics and Forecasting of NAS, and V. Prokopenko who works at Kharkiv National University of Internal Affairs. Due to this fact each of these institutions receives +1 point in the rankings calculation.

There is a lack of publicly available information about the applicants so it is difficult to analyze all the cases where academic degree awarding was accompanied by high corruption risks. But still it is possible to deconstruct the most cynical cases of granting academic degrees to the high-level officials who have never been involved with academics. These cases will serve as a basis for creating the ranking system, though we admit that it may create some sort of non-representativeness of the selection. The sources for the analysis is the database of the dissertation abstracts in the Vernadsky National Library of Ukraine and the biographies of these high-level officials that are available on the Internet.

The selection for ranking is formed from the deputies of the past three convocations (2007-2012, 2012-2014, 2014), Ministers, chairpersons of State agencies or committees at that time, their deputies, chiefs of the Presidential Administration. To build the ranking we selected 41 theses that match the specified in the methodology criteria of the corruption risk, where the supervisors or opponents were economists. The list of theses is given in Appendix 1 (Corruption-sci) with the NAME and SURNAME of the author, the year of defense, the post that an author held during the defense, the institution where the thesis was completed, the scientific supervisor and opponents.

It comes as little surprise that four of the fifteen institutions that are “leaders” of corruption risks are located in Donetsk and one in Luhansk. This can be explained, in part, by the number of public figures that began their career in the Donetsk and Luhansk regions.

The worst performing institutions are Institute of Industrial Economics of NAS and Kyiv National University named after V. Hetman. For example, the theses of several Yanukovich cronies, including V. Rybak, S. Liovochkin, K. Zhevago, V. Landyk were prepared in these institutions. Five out of fifteen “leaders” for corruption risks are the institutes of NAS of Ukraine and one more institution – the institute of the Academy of Agricultural Sciences. The opponents for three dissertations from the selection worked in the National Security and Defense Council of Ukraine or in its institutes, in particular, Mr. Yanukovych’s dissertation opponent. The “leaders” of the ranking are located in Kyiv, Donetsk, Lviv, Luhansk and Dnipropetrovsk.

Academic degree trading is the result of overregulation and centralization in science and principle of rigid vertical structures. This situation diminishes the importance of reputation, which should be the basis of scientific community existence. “Proffesors”, as Mr. Yanukovych notoriously spelled it on his CV, would never have received an academic degree if those who participated in making this decision cared about his or her reputation. Mr. Yanukovych and his cronies have already escaped from the country, but the people who awarded them academic degrees continue to teach Ukraine’s next generation. They support each other and will support to the latter to maintain the system by not allowing the others to change it.

Changing the current system to spur new growth in line with international standards, as well as to integrate Ukraine into the global scientific community, is a tough challenge for the Ministry of Education and Science.