Ukrainians have been actively using international crowdfunding platforms, such as KickStarter, IndieGogo and GoFundMe, since crowdfunding gained popularity worldwide as a tool for raising funds for various causes and ideas. Domestic platforms were established as early as 2011, including the Ukrainian Philanthropic Marketplace and Spilnokosht, which provided new opportunities for civil society initiatives, social entrepreneurships, and people in need to reach out to Ukrainian audiences. Donations collected through crowdfunding literally fed and warmed protesters during EuroMaidan. Since the Revolution of Dignity, crowdfunding in Ukraine has gained popularity as a fundraising tool for diverse issues, from humanitarian relief for people affected by the military conflict through platforms such as families.org.ua and People’s Project, to community development and social innovation.

Stanford Social Innovation Review defines crowdfunding as “collection of funds from contributors, usually online to fund an initiative”. For years crowdfunding has been used worldwide from people to people and with the people engaging crowds from different parts of the world. By using online technologies to its best potential,  crowdfunding expands the concept of communities thus empowering civic activism for resolving the real offline issues, from harsh humanitarian crises and human rights threats to developing tech know-hows for making people’s lives easier.

Internationally, four types of crowdfunding are defined as:

In the Ukrainian context, certain circumstances might indicate conducive environment for development of crowdfunding and philanthropy. For example, volunteer organizations collecting funds for pressing issues of Euromaidan and ATO enjoyed the greatest level of trust among the Ukrainian institutions in 2016. Beyond donation-based crowdfunding, Pact’s semi-annual public opinion found that the majority of Ukrainians (55%) believe now is the time “when everyone should take care of joint interests”. In this context experts state the development of the new distinctive type of crowdfunding in Ukraine, community-enhancing crowdfunding, which maximizes donor engagement for a positive impact on the society [1].

International platforms are rewarding for Ukrainian initiatives since they help target Ukrainian diaspora, engage broader international community for charity and to enter foreign markets for Ukrainian business. Ukrainians used international crowdfunding platforms, such as KickStarter, Indiegogo and GoFundMe, before Ukrainian platforms were developed, and they continue to use them. Kickstarter and Indiegogo are rewards-based platforms mainly used by start-up businesses, although they also support charity campaigns. GoFundMe, a donation-based crowdfunding platform, gained popularity for raising money during the EuroMaidan and in response to the crisis in the eastern Ukraine.

KickStarter, launched in 2009, has supported over 119,000 projects all over the world, including at least 82 projects in Ukraine, and have raised $2.9 billion from 12 million backers worldwide (more information on fundraising for Ukrainian projects can be found below in Table 1 and Figure 1). The projects in Ukraine can be found in categories from technological know-how (Gooli) to support for up and coming artists (United People First). One the most successful Ukrainian Kickstarter campaigns is Ohhio chunky knits, which raised over $300,000, received extensive media coverage, and was a huge hit in the “Made in Ukraine” movement.

Indiegogo supports creative and entrepreneurial ideas of all shape and size, as well as non-profit and humanitarian projects. Established in 2008, the platform has supported the launch of 650,000 projects, helping them raise over $1 billion and engage over 11 million backers (including over $750,000 for Ukrainian projects, more information below in Table 1 and Figure 1).). The platform gives special attention to non-profit projects, offering 0% fee for non-profit projects focused on social causes. Indiegogo hosted the crowdfunding campaign of Ukraine’s Hromadske Radio and campaigns for Ukrainian students raising funds to study abroad.

In recent years, several Ukrainian crowdfunding platforms have developed, focusing on diverse issues, such as humanitarian relief for people who suffered during EuroMaidan and in the conflict in eastern Ukraine, business start-ups, and innovative civil society and community development projects. Ukrainian crowdfunding platforms can be classified according to their specialization: support of humanitarian issues, non-profit projects, or social entrepreneurship.

The table and figures below present statistics from Ukrainian fundraising campaigns on various platforms, both international and Ukrainian. Although these data  on platforms does not necessary equal platforms’ impact, it might be used to illustrate some funding habits of Ukrainians.

In Ukraine, we can define three main types of crowdfunding:

Spilnokosht is a platform for community development projects in the sphere of urbanism, art, media, human rights, technology, and education. Founded in 2012 on the basis of the social innovation platform “BigggIdea” and supported by Pact under the UNITER project, Spilnokosht was one of the first and the most well-known Ukrainian crowdfunding platforms for social innovations and community development projects.

Despite relatively lower levels of fundraising compared, for example, to Ukrainian Philanthropist Marketplace (UBB), Spilnokosht is an example of how community funding impacts complex transformation processes in Ukraine. For example, Hromadske Radio campaigns on Splinokosht demonstrate the public’s willingness to pay for unbiased information and support reform in public broadcasting. Hromadske Radio’s first campaign on Spilnokosht opened in 2013, before the start of the EuroMaidan. A turning point in the Ukrainian culture of giving followed, with Hromadske TV’s 1 million hrivna fundraising campaign [1]. Since 2013, Spilnokosht has hosted three campaigns for Hromadske Radio targeting the Ukrainian diaspora.

Spilnokosht promotes the development of a culture of giving, whereby the donor cares about quality project implementation by holding the creator accountable for spending the funds donated (so-called strategic philanthropy). With its recent modifications, Spilnokosht now provides opportunities for initiatives to fundraise for institutional support to enhance the sustainability of non-profit innovative solutions. Institutional crowdfunding can now be managed through Spilnokosht, or via a special button “donate” on the website of many Ukrainian NGOs.

GoFundEd is a new crowdfunding platform for educational projects that allows teachers to raise funds for their innovative projects at schools to develop schoolchildren’s key skills. As of January 2017, the platform has hosted 20 successful campaigns and raised over UAH  300,000.

A completely different crowdfunding model is proposed by the NGO Teple Misto already tested in Ivano-Frankivsk. The initiative aims at engaging 500 investors to crowdfund a city restaurant in Kyiv, 80% 0f profit of which will be redirected for funding of social initiatives.

One domestic platform example is Komubook, the Ukrainian platform for crowd-publishing. In return for contributing funds for a book’s publication, backers are provided a copy of the book. Na Starte is also built on the idea of group buying as a means to fund innovative entrepreneurial ideas. 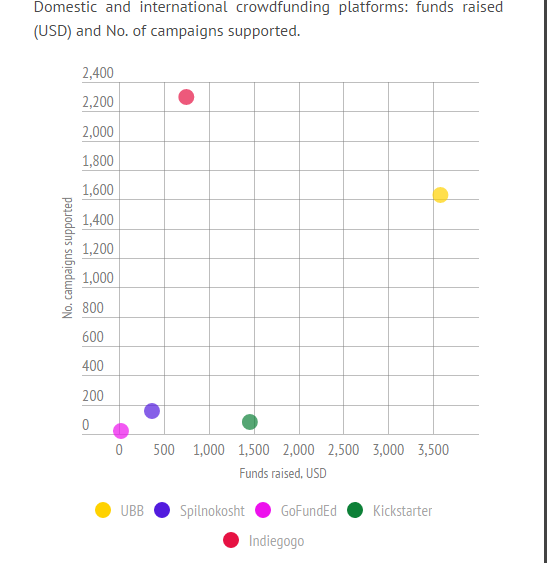 Spilnokosht and the newly established GoFundEd, representing the third type of platform distinctive for Ukraine, community-enhancing philanthropy, were able to fundraise smaller amounts and support fewer campaigns. However, the data (Figure 2.) indicate that the funds raised via Spilnokosht almost doubled each year compared to the previous one.

Figure 2. Fundraising via Spilnokosht: amount of funds raised (USD) and number of givers. 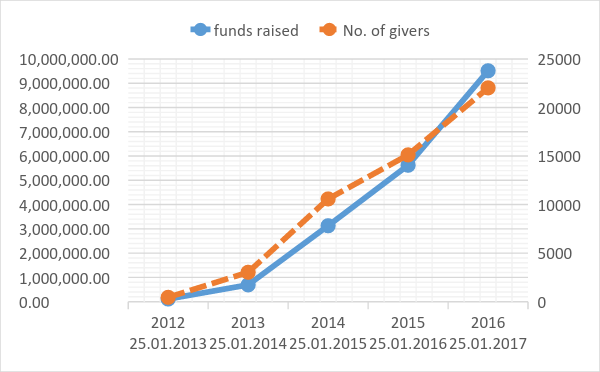 Data on Ukrainian crowdfunding platforms portray certain values driving the activity of average Ukrainian philanthropists. Data show that  there is conducive environment for development of culture of giving since the EuroMaidan events. However, they also indicate that more Ukrainians are eager to donate for pressing issues that require immediate response than for systemic changes offering complex transformations.

The tendency of Ukrainians to donate into quick fixes rather than long-term community solutions points to the need to develop a culture of giving within Ukrainian society. This involves comprehensive research on the audiences and education of donors that will help promote a culture of smart giving within the society and ensure effective community consolidation for change-making solutions. Within these tasks, platform specialization would help develop targeted approaches to the community of donors. In order to leverage the impact of crowdfunding on Ukraine’s transformation processes, its advocates should develop targeted approach to the variety of audiences focusing on incentives driving their activity: