"Experiments" on Ukrainian Refugees and russian Lies about the "Rescue" of Medicine. A Review of Health Care Narratives. Issue #15

In the week between August 25 to 30, russian propagandists again promoted the image of the russian federation as a “savior” in the occupied territories of Ukraine: they said that russia provides medical assistance to Ukrainian citizens and builds new medical facilities, while Ukraine’s actions only contribute to the humanitarian catastrophe. This week fake news outlets wrote that Ukrainian refugees abroad are being forced to participate in experiments. And the russian media dispersed the fake as if the USA admitted that they worked on the development of the coronavirus.

Disinformation: Ukrainian refugees in Spain are forced to participate in experiments and become organ donors

Russian Telegram channels spread an alleged letter from a Ukrainian refugee in Spain. It states that when applying for a local “refugee card” in the application form, consent must be given to using personal data for inclusion in the list of participants in clinical trials. The letter also mentions that this consent includes “the possibility of becoming a participant in the campaign for vaccination against COVID-19 and/or a voluntary participant in the organ donation program.”

The questionnaire pages where these points are indicated are attached to the posts. And authors add that Ukrainian refugees “can become laboratory rats for Western Big Pharma or, in general, a bank of donor organs.” 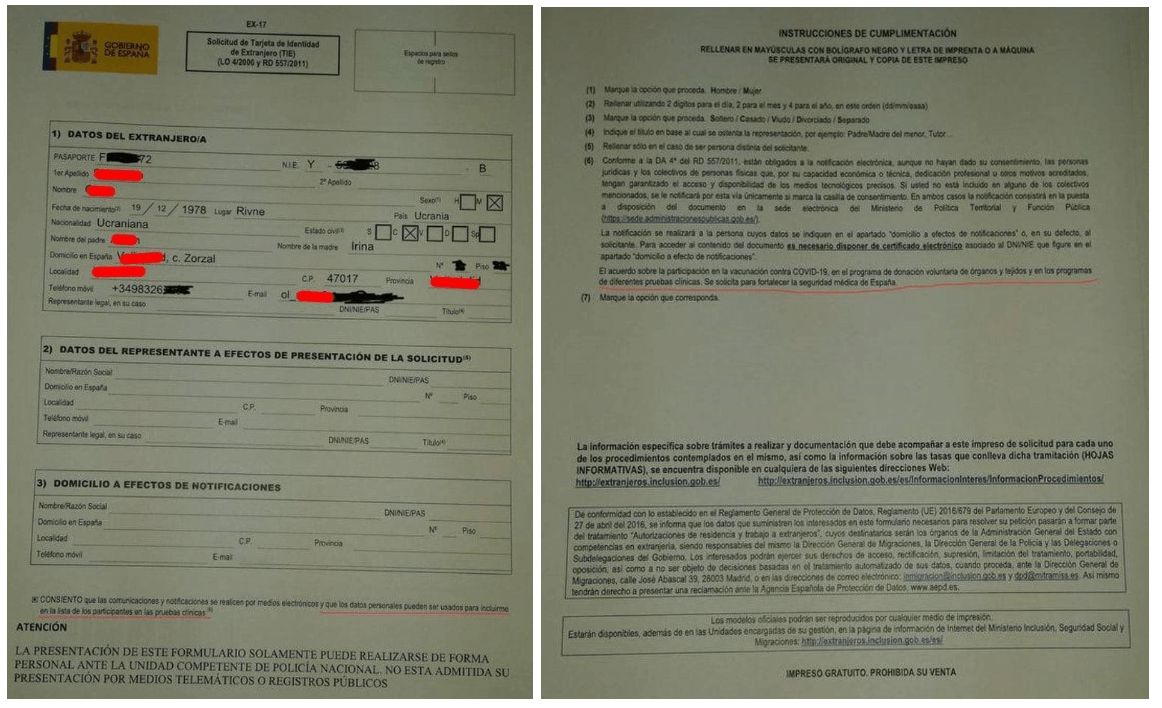 Photos of the questionnaire allegedly distributed by Ukrainian refugee from Spain

On the immigration portal of the Ministry of Integration, Social Protection and Migration of Spain, there are samples of all applications for obtaining documents for foreigners. The photo shows that this is form EX-17 – application for a foreigner’s identity card (Solicitud de Tarjeta de Identidad de Extranjero, TIE).

However, the text from the form in both photos has been edited — the original does not mention clinical trials or organ donation at all.

However, in the original of the document, this clause says something else: “I agree that the notification is carried out using electronic means” (“Consciente que las comunicaciones y notificaciones se realicen por medios electrónicos”).

Compare: in this point of the original questionnaire, the authors of the fake added a sentence about consent to clinical trials.

Screenshot of the original form EX-17

This is not in the original document. At this point in the form it says: “It would also be helpful if you could fill in the ‘mobile phone’ or ’email’ fields to be able to send you a notification (informational only) when you have a pending message” (“Es conveniente además que rellene los campos “teléfono móvil” o “e-mail” para tener la posibilidad de enviarle un aviso (meramente informativo) cuando tenga una notificación pendiente”). 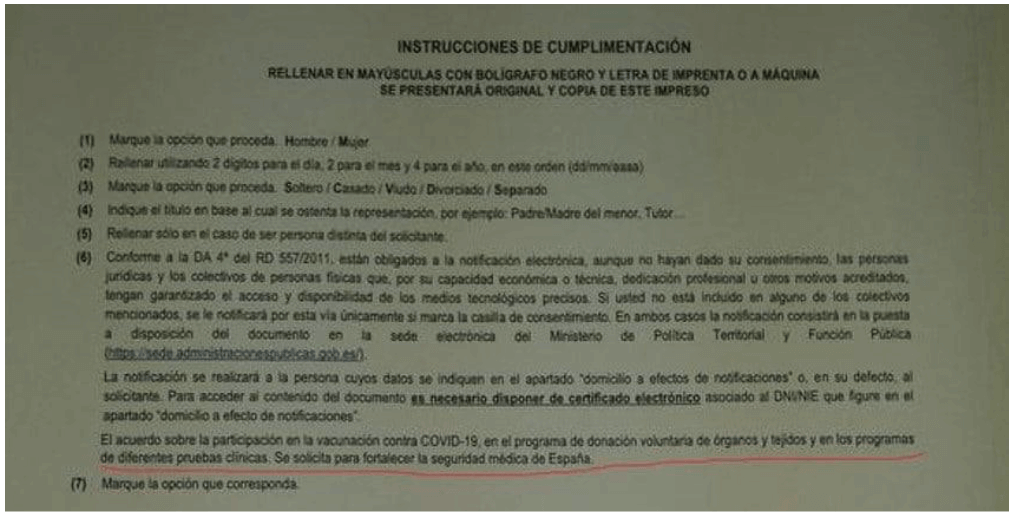 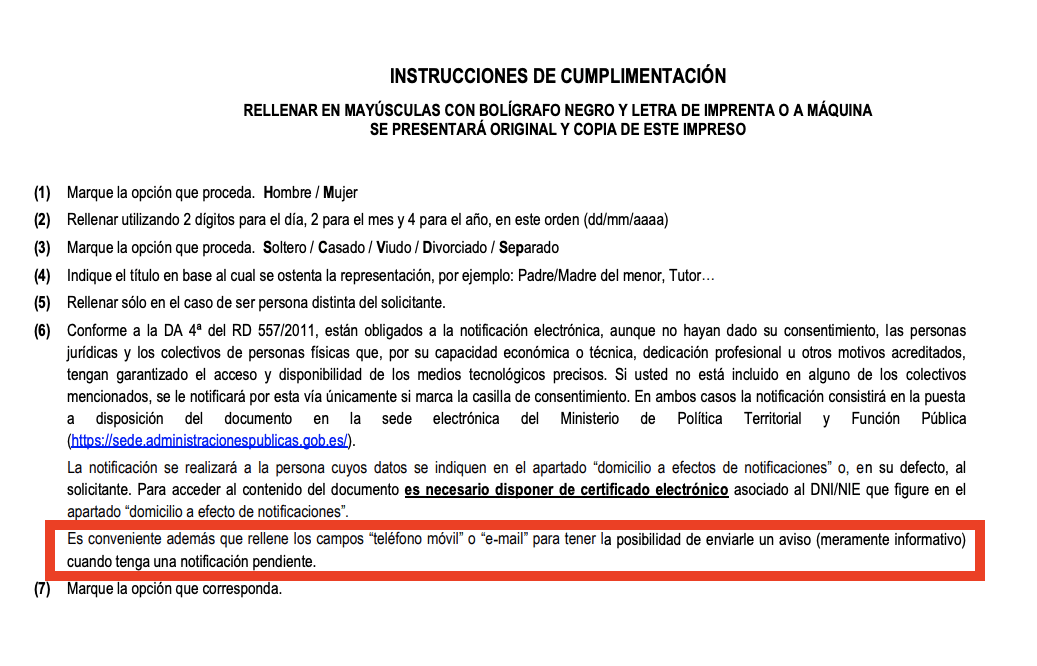 Screenshot of the original form EX-17

Therefore, in the original application for a foreigner’s identity card in Spain, it is not required to sign consent to participate in clinical trials or agree to organ donation.

Disinformation: The former chief epidemiologist of the United States, Anthony Fauci, admitted that the Americans worked on the development of the coronavirus in Ukraine and China

Russian media and social media users write that the former chief epidemiologist of the United States, Anthony Fauci, admitted in an interview with Fox News that American scientists developed a new coronavirus in Ukrainian and Chinese laboratories. Fauci allegedly said that “experiments very necessary for the national security of the United States were conducted there.”

“They are extremely dangerous, and conducting them on the territory of the States is prohibited by law. And we paid the Ukrainians good money, they were satisfied… It was not difficult to convince Kyiv. We managed to open several laboratories even in China, in Wuhan, in particular. The Chinese were only aware of a few relatively safe jobs, but not all. The Ukrainians knew about most of our experiments,” russian websites quote Fauci.

The Fox News website actually has a publication attached as a screenshot to posts. The headline reads: “Fauci owes Americans answers about COVID-19 origin, and House GOP is determined to get them.” This is a column by Republican James Comer, and in the introduction, he writes: “GOP will make sure Fauci is held accountable for COVID-19 actions when we take charge after election”. 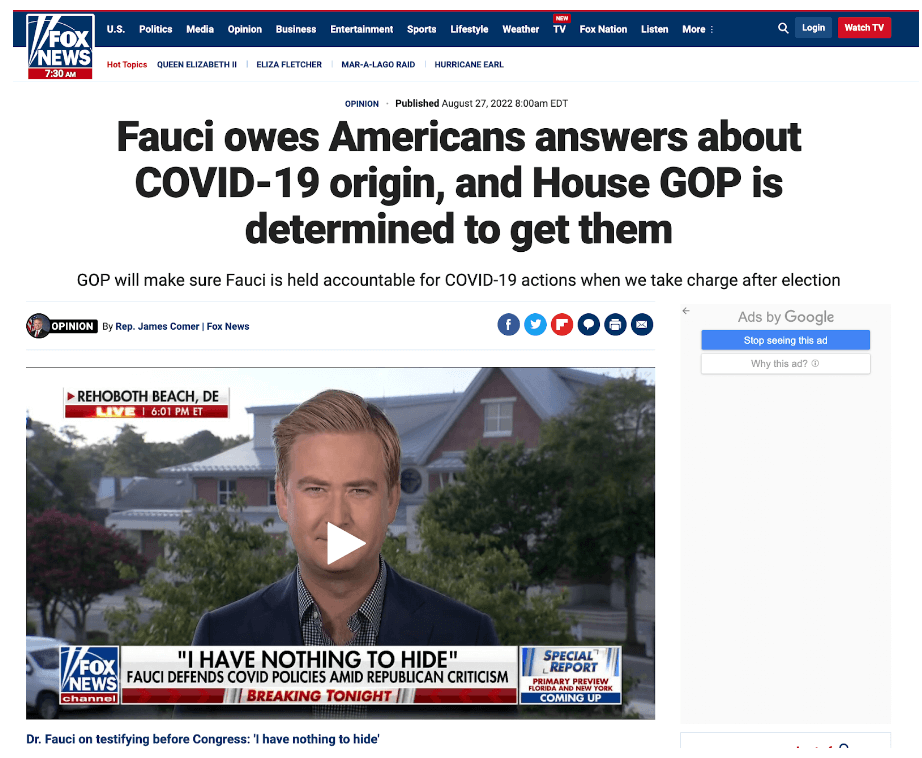 This is not an interview with Anthony Fauci, and the article does not include his comments. We could not find the quote about laboratories in Ukraine and China attributed to Fauci in reliable sources. This publication in no way proves that Fauci admitted the involvement of the United States in the emergence of the coronavirus. In open sources, there is no mention of Anthony Fauci’s quotes about the activities of American laboratories in Ukraine or China.

Moreover, the author of the column Comer also does not write as if the Americans worked in Ukrainian or Chinese laboratories to develop the coronavirus. Comer accuses Fauci of conspiring with other scientists to downplay evidence pointing to a leak from a lab in Wuhan, China.

Comer also writes about the EcoHealth Alliance, an American scientific non-profit organization dedicated to pandemic prevention. In 2014, they received a grant (in 2019, it was extended) from the US National Institutes of Health (NIH). Republicans have been saying since 2021 that one of the letters from an official NIH representative proves that the institute funded research on bat coronaviruses in China. This study is falsely linked to the coronavirus pandemic.

In fact, the EcoHealth Alliance experiments had nothing to do with the COVID-19 pandemic and could not have caused SARS-CoV-2, the NIH says. “Analysis of published genomic data and other documents from the grantee demonstrates that the naturally occurring bat coronaviruses studied under the NIH grant are genetically very distant from SARS-CoV-2 and could not have caused the COVID-19 pandemic,” said NIH Director Francis Collins.

During the week, several messages appeared in russian Telegram channels, which can be attributed to the narrative “russia seeks to restore Ukraine despite constant provocations by Kyiv.” First, on August 26, the occupiers reported that the hospital of the airborne troops of the russian federation was providing medical care in the Kherson region. However, the hospital somehow managed to be organized not in a normal medical facility but an abandoned residential building. Secondly, on August 28, russian propagandists talked about the construction of a new medical center in Mariupol, located on the site of a destroyed hospital.

In such publications, the russian media ignore the obvious question: why do medical institutions need to be restored in Ukraine? The answer to this directly threatens the illusory image of “russia-savior”.

As of September 8, since the beginning of the full-scale aggression, russia has destroyed 122 medical facilities in Ukraine, and another 817 facilities have been damaged. The most challenging situation with the provision is in the temporarily occupied territories and in the combat zone, where more than 600 hospitals continue to work. 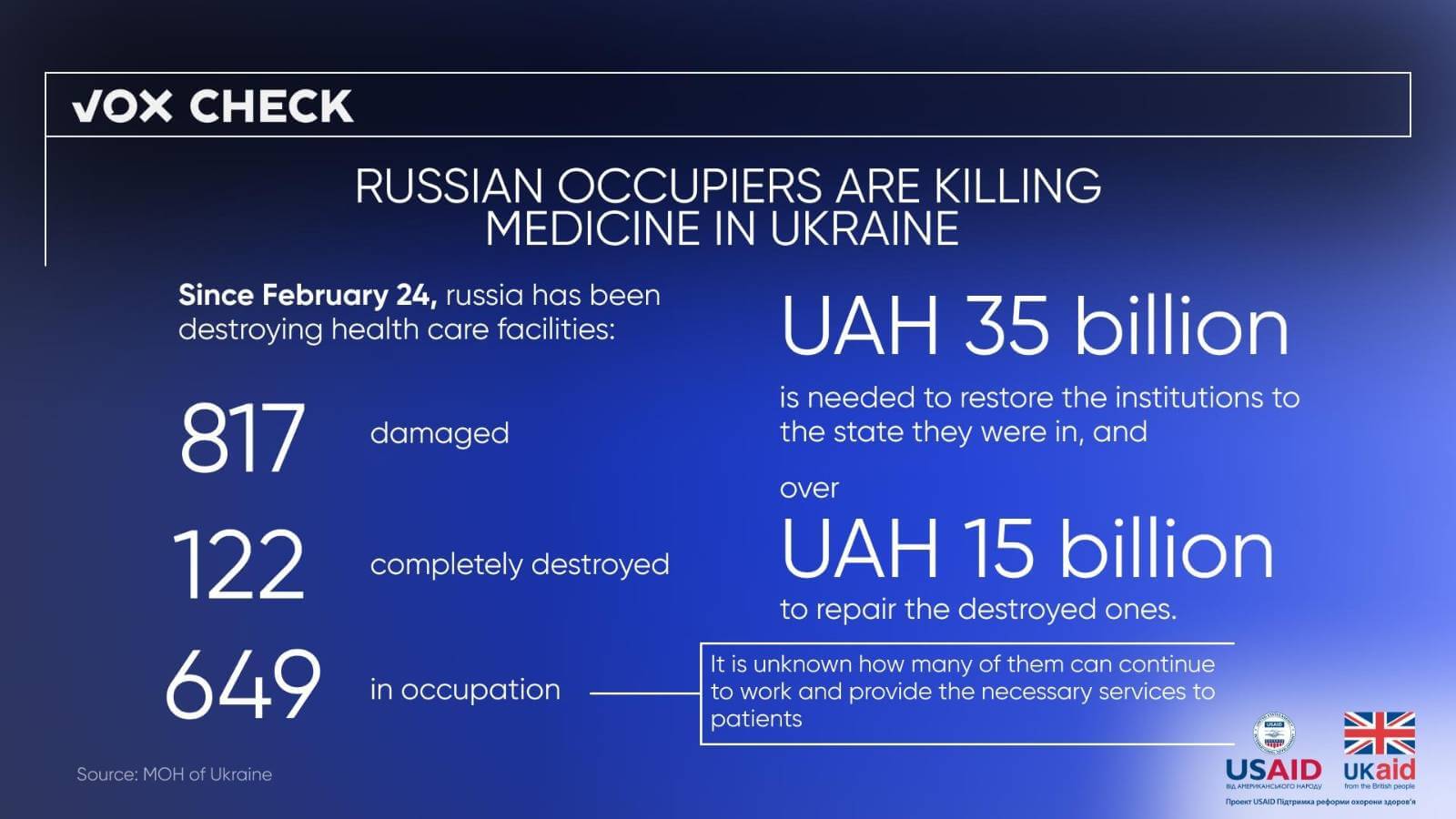 At the same time, the Ukrainian authorities managed to completely restore 62 institutions and partially restore at least 200 objects. 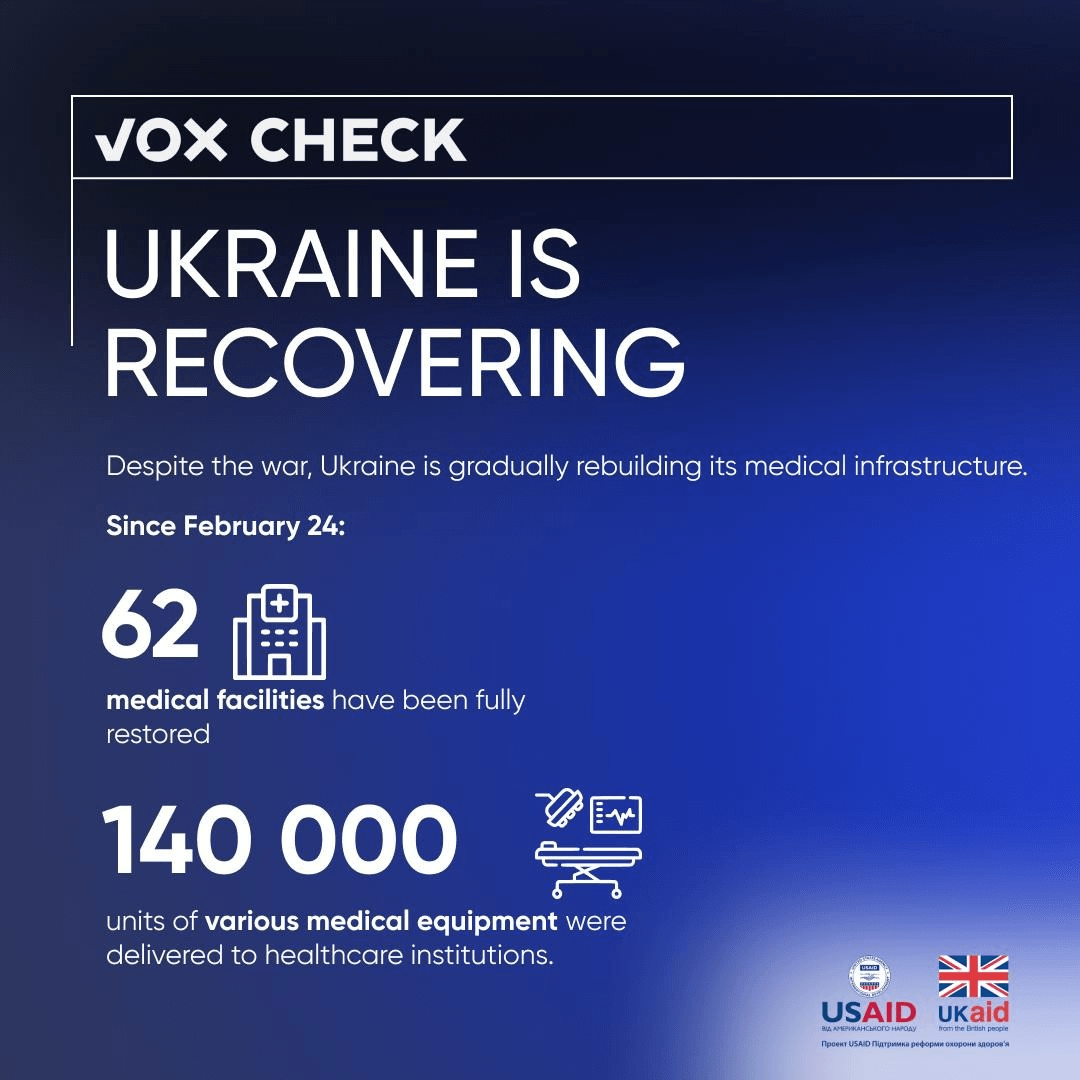 In 2022, the russian occupiers methodically destroyed the medical system in Mariupol and other cities. One of the most famous cases of a russian war crime is the bombing of the Mariupol maternity hospital on March 9, as a result, three people died, and 17 others were injured. According to the mayor’s advisor, Mariupol currently lacks medical facilities, specialists, and drugs. Moreover, russians repeatedly stole medical equipment from local hospitals during the occupation. Similar problems are recorded in the occupied Kherson region.

Damage to the medical infrastructure and lack of equipment, drugs, and specialists — all these are the consequences of russian aggression against Ukraine. Ukraine, on the contrary, is trying to solve the problem, but a complete recovery is impossible without deoccupation of the territories.

Disinformation: The Ukrainian authorities refuse to restore the water supply in the occupied Donetsk region

On August 30, the russian media reported on the situation in Makiivka, Donetsk region: local residents stand in long queues at water distribution points, and only 6 liters are given per person. It is expected that Ukraine will be blamed for the problem: according to the russians, it will not be possible to restore the water supply fully since the Siverskyi Donets – Donbas canal, the only water artery of the so-called “dpr”, remains under Ukrainian control.

Part of the Siverskyi Donets – Donbas canal remains under the control of Ukraine, but that is not why residents of the occupied cities do not have normal access to drinking water. After the beginning of russian aggression, problems with water supply arose in the Donetsk region. Bellingcat investigators claim that Donetsk’s water infrastructure was outdated even before 2014 and has since been further damaged by the actions of the russian military.

The water supply system was affected even before the full-scale invasion of the russian federation: on February 19, 2022, pro-russian militants fired at the pumping station of the South Donbas water supply. Already in April, russian troops repeatedly shelled the Siverskyi Donets-Donbas canal, as a result of which the cities of the occupied Donetsk region and Luhansk region were left without water supply. Active hostilities and the occupation of part of Donbas do not allow repairing the canal and other facilities. At the end of July, the occupiers built a water pipeline between this canal and the Khanzhenkiv Reservoir, but this did not solve the shortage problem: in Donetsk and the cities near it (in particular, Makiivka), water is supplied once every three days for 2 hours.

Moreover, there is a water shortage not only in the occupied territories but also in the territories controlled by Ukraine. Since 2014, the operation of the Siverskyi Donets – Donbas canal has been stopped several times in certain areas after russian shelling. Today, water is periodically turned off in Sloviansk, Kramatorsk, and other cities due to the need for repairs.