A video circulates online that allegedly shows how the military volunteer unit “Tornado” is hearing the Presidential Decree «On the approval of the decree of the General Staff of the Armed Forces of Ukraine on the attack on Belgorod and the Belgorod region of April 10, 2022».

However, this decree doesn’t exist in real life, as well as the volunteer unit “Tornado”.

The text of the “decree” heard on the video:

«Due to the ongoing large-scale armed aggression of the Russian Federation against Ukraine, based on the proposal of the Supreme Commander-in-Chief, according to the paragraphs 2, 17 of the first article 116 of the Constitution of Ukraine, Law of Ukraine «On the legal regime of martial law», I decree:

In fact, Article 116 of the Constitution of Ukraine cannot serve as a basis for this decree. First, Article 116 is about the powers of the Cabinet of Ministers of Ukraine, not the President. Secondly, it does not correspond to the content of the «decree». According to paragraph 2, the Cabinet of Ministers of Ukraine takes measures to ensure the rights and freedoms of a person and a citizen. There is no paragraph 17 in this article at all.

In addition, there are some inaccuracies. Thus, at the end of the text, “decree” is called “order”, and “Armed Forces of Ukraine” were called “Military Forces of Ukraine”, although the correct terms were used before that.

The angle for shooting the video was chosen to focus on the chevron as an element of military uniform and the flag of the former «Tornado» volunteer battalion.

The «Tornado» special forces was a company of special police patrols. In 2015, it was disbanded due to the arrest of a group of special forces fighters, including Commander Ruslan Onishchenko. They were suspected of forming a criminal organization and committing severe crimes: rape, torture, illegal imprisonment, etc. In total, the criminal case includes 86 volumes. Two years later, the court sentenced the defendants from 5 to 11 years in prison, depending on the conditions of the personal case.

However, the chevron from the video “Tornado” does not indicate “МВС” (as stated on the official chevron of the company), but «Добровольча НУА» («Volunteer NUA»). However, this voluntary group doesn’t exist in Ukraine. 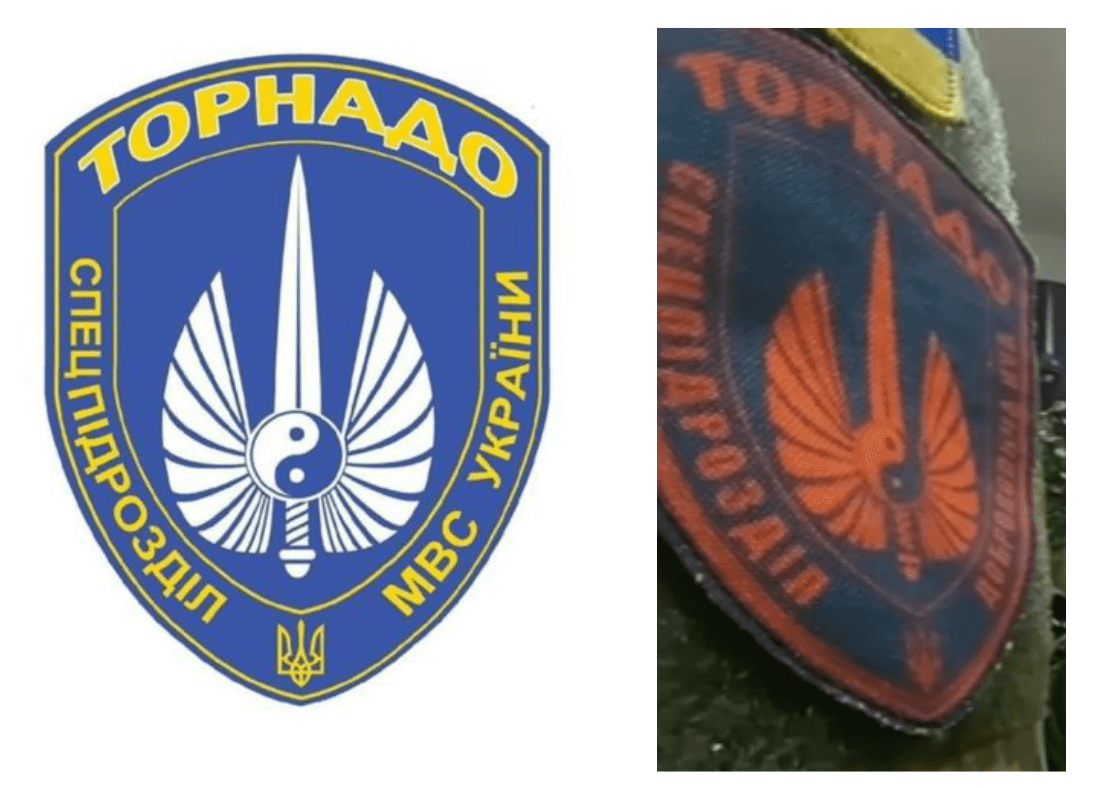 Chevron “Tornado” and chevron from the video

It is known that in 2022 Ruslan Onishchenko applied for participation in military activities, but there is no confirmation of acceptance of this application. However, the amendments to the Criminal Procedure Code of Ukraine do not apply to persons accused of treason, murder; crimes related to violence, rape, organized crime, war crimes. Defendants under these articles, including Onishchenko, cannot be mobilized.