FAKE NEWS: The Ukrainian side opened fire on evacuation corridors in the Sumy and Zaporizhzhia regions

FAKE NEWS: The Ukrainian side opened fire on evacuation corridors in the Sumy and Zaporizhzhia regions

Social media spread information that on March 28, the Ukrainian side “fired small arms and mortars in the Sumy and Zaporizhzhia regions hampering efforts to evacuate citizens.” That is what russia’s defense ministry stated earlier, adding the shelling had come from “territorial battalion militias.” Russian propaganda outlets and social media groups disseminated the statement.

This is fake news, as humanitarian corridors are open only for the evacuation of civilians to Ukraine-controlled territory. Ukraine did not open the corridors on March 28. 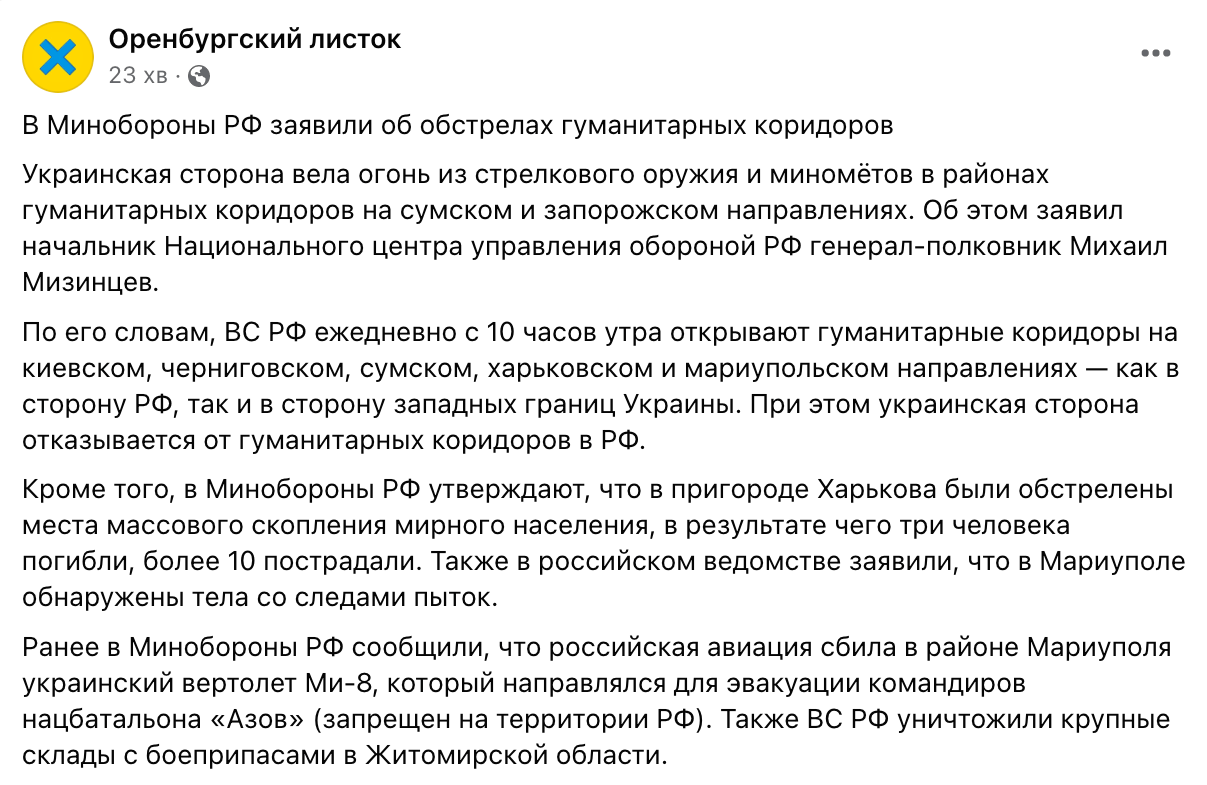 Russia’s defense ministry spoke about the shelling of humanitarian corridors.

According to him, russian armed forces open humanitarian corridors daily at 10 a.m. in the Kyiv, Chernihiv, Sumy, and Mariupol regions to russia and Western Ukraine. The Ukrainian side does not agree to the corridors to the russian federation.

Russia’s defense ministry also says that civilians came under fire in a public place on the outskirts of Kharkiv, resulting in three people dead and over ten injured. According to the ministry, bodies with marks of torture were found in Mariupol.

Earlier, the defense ministry said russian jets shot down a Ukrainian Mi-8 helicopter near Mariupol, which was supposed to evacuate the commanders of the national battalion Azov (banned in russia). The russian army also destroyed large ammunition depots in the Zhytomyr Region.

Minister for Reintegration of the Temporarily Occupied Territories of Ukraine Iryna Vereshchuk said the humanitarian corridors would not be opened on March 28, 2022, for security reasons.

Thus, the Ukrainian side could not open fire on any humanitarian corridors.

Besides, it is not the first time that propaganda outlets have spread fake news about the Ukrainian military opening fire on humanitarian corridors. First, there is no logic behind organizing and conducting an evacuation mission by the Ukrainian side and simultaneously thwarting it by shelling. The so-called “evacuation” of civilians to russia as carried out in Mariupol is the unlawful, forcible transfer of people. They confiscate the passports of Ukrainian citizens and forcibly transfer them to non-government-controlled territories to later transfer them to the territory of the russian federation.

Second, the victims of the shellings themselves debunk the fake news of the Ukrainian side opening fire. The russian military fired automatic weapons at two civilian cars moving through the humanitarian corridor. Two children, three women, and one man were injured in the shooting. The russian military then said the crime was committed by Ukraine’s armed forces. However, the victims completely refuted this disinformation.

Third, the humanitarian corridors and columns of civilian cars are regularly shelled by Russian troops. Just a few examples out of many:

According to Ivan Arafyev, spokesman for the Zaporizhzhia Regional Civil Administration, the russian military at checkpoints initially pretends to allow civilian vehicles to pass from areas under constant shelling and bombing to safer regions. However, as soon as the car is 100-500 meters away, they open fire to kill. The occupiers do not even pay attention to the fact that there are small children in the car.”