FAKE: Russian military is not involved in the mass killings of civilians in Bucha

FAKE: Russian military is not involved in the mass killings of civilians in Bucha

Russia denies its involvement in war crimes by engaging in disinformation campaigns, including on Facebook. The social network’s users disseminate varied versions of why russia does not bear any responsibility:

Some versions contradict others from the same pro-russian sources: the first version links the deaths of civilians to the Azov Regiment, while the second to artillery fire by the AFU. Some versions call the killings “staged scenes involving actors.” Others recognize dead bodies but shift all responsibility to Ukraine.

According to pro-russian users, the russians left Bucha on March 30, and the mass killings in the town became known only on April 3. Both dates are incorrect. 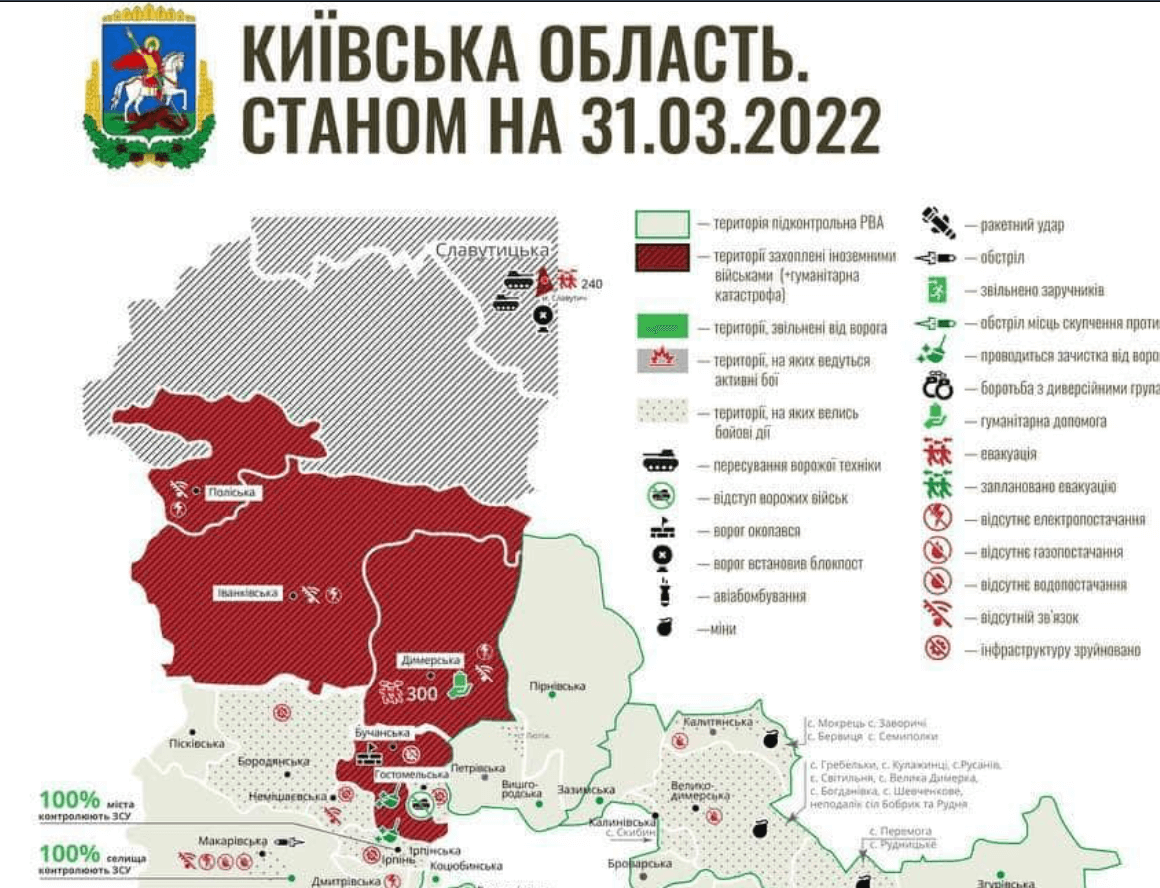 A map of the combat area in the Kyiv region as of March 31, 2022, with Bucha marked as occupied territory.

Here is how the liberation of Bucha was reported at the end of March and in early April:

We assume that the different dates (according to the mayor, the liberation date was March 31, while the military said April 2) come from different interpretations of when the town could be considered liberated from russian occupation. The mayor must have believed the city had been freed when the main russian forces had begun to withdraw. In contrast, the military administration believed the place could be considered liberated only after they completely cleaned out the saboteurs.

Videos showing lots of dead bodies on Bucha streets appeared not on April 3 but on April 1. Therefore, it was less than a day since the withdrawal of the russian army and the first reports of mass killings.

Artillery fire and a clean sweep by the Azov Regiment

Open sources provide no information about the Ukrainian military using artillery to fire on civilians in Bucha before entering the town. Also, this russian version contradicts the nature of the civilians’ fatal wounds. According to the mayor of Bucha, 90% of the killed had bullet wounds.

The Azov territorial defense unit operated in the Kyiv region as part of the Armed Forces. Specifically, its fighters fought in Bucha in early March. However, it is unknown whether it participated in freeing Bucha in April. Notably, Azov is not fundamentally different from other Ukrainian Army units. If it was in Bucha in early April, it most likely performed the same tasks as the army, police, and volunteers, i.e., clearing the town of saboteurs, protecting civilians, and helping demine the area.

A version of a “staged scene involving actors.”

To back up this russian propaganda theory, they provided two excerpts from the video. The first clip allegedly showed a dead body on the road raising one hand. In the second clip, users saw in the rearview mirror a dead body trying to sit up.

The dead body whose hand allegedly moved, according to Facebook users’ version 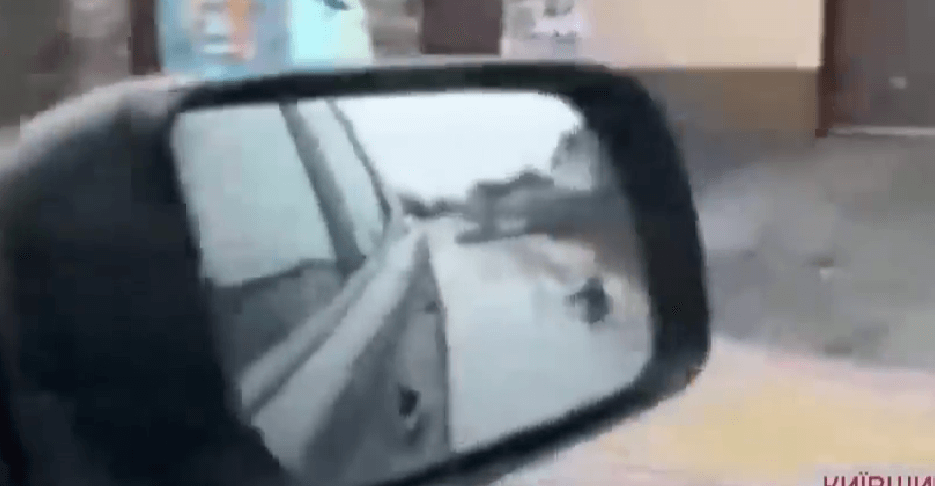 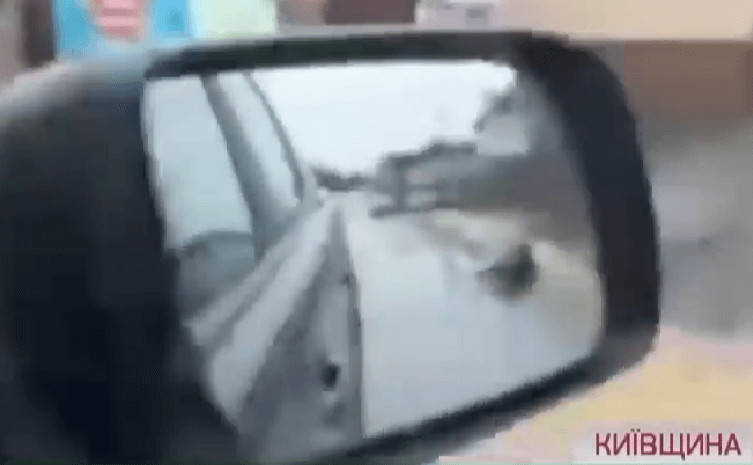 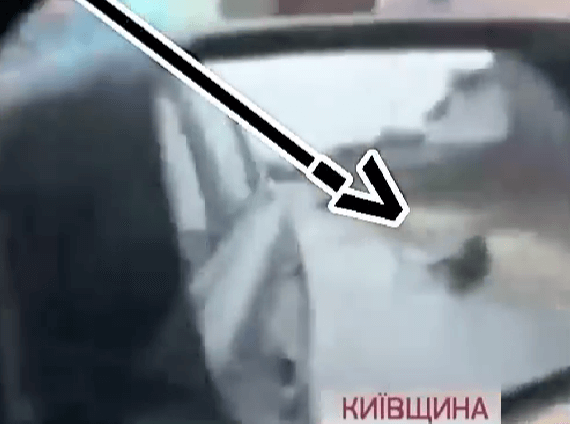 The dead body which allegedly sat up, according to Facebook users’ version

The biggest problem with this video is its low quality, making it hard to see the details. A video of better quality can be found on the page of the lawyer Illya Novikov.

Screenshots of the video posted by Illya Novikov

Looking at the video’s better quality version, we can see that the “hand” is just a dirty spot on the vehicle’s windshield from where it was filmed. The spots can be seen in other excerpts of the video. 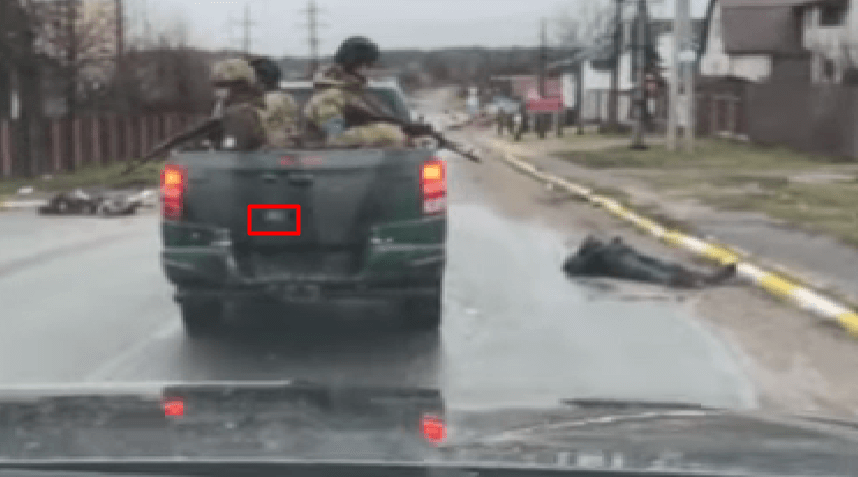 Dirty spots on the windshield

The dead body in the rearview mirror was not moving. In reality, its image kept changing as the vehicle gradually moved away from it. 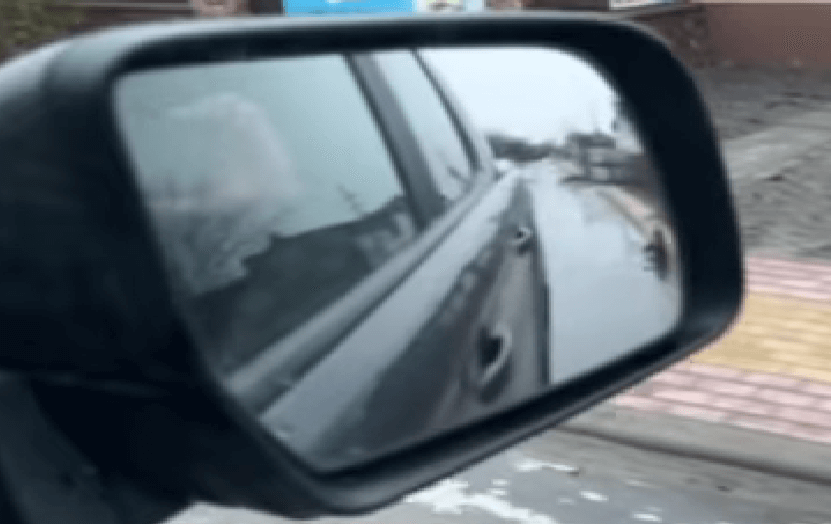 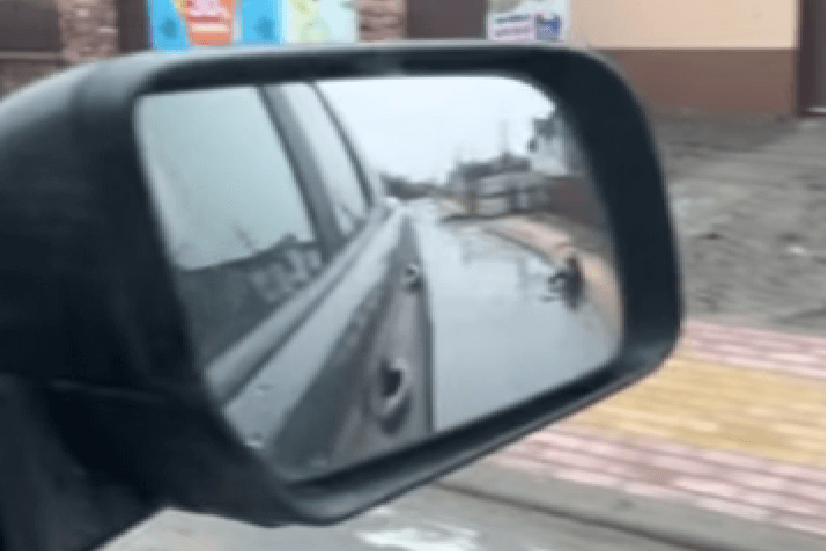 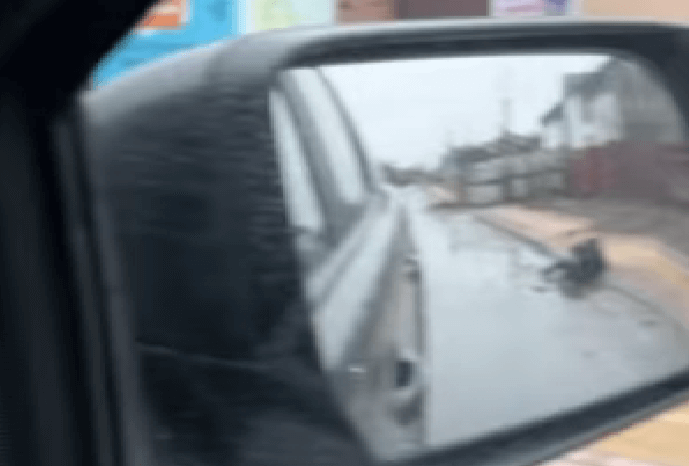 Mass graves and dead bodies in the streets

On February 25, 2022, the Ukrainian military blew up three bridges to the northwest of Kyiv to halt the russian troops’ offensive. In early March, Ukrainian authorities organized the evacuation of civilians from Irpin, Bucha, and Vorzel. There is no connection between blowing up the bridges and the death of civilians. Destroying road infrastructure was necessary for military purposes.

Mass graves appeared in Bucha during russian occupation. Maxar Technologies published satellite images, saying they observed the first signs of a mass grave in Bucha near Andrew the First-Called and All Saints church on March 10. 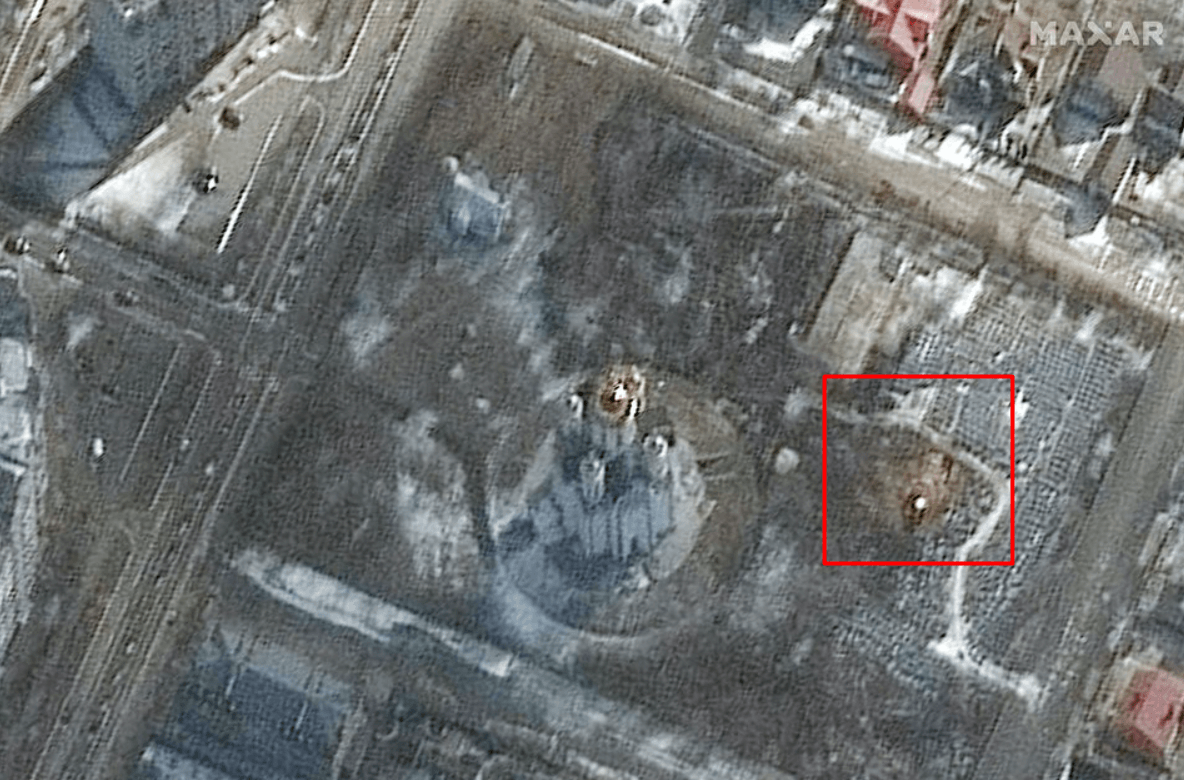 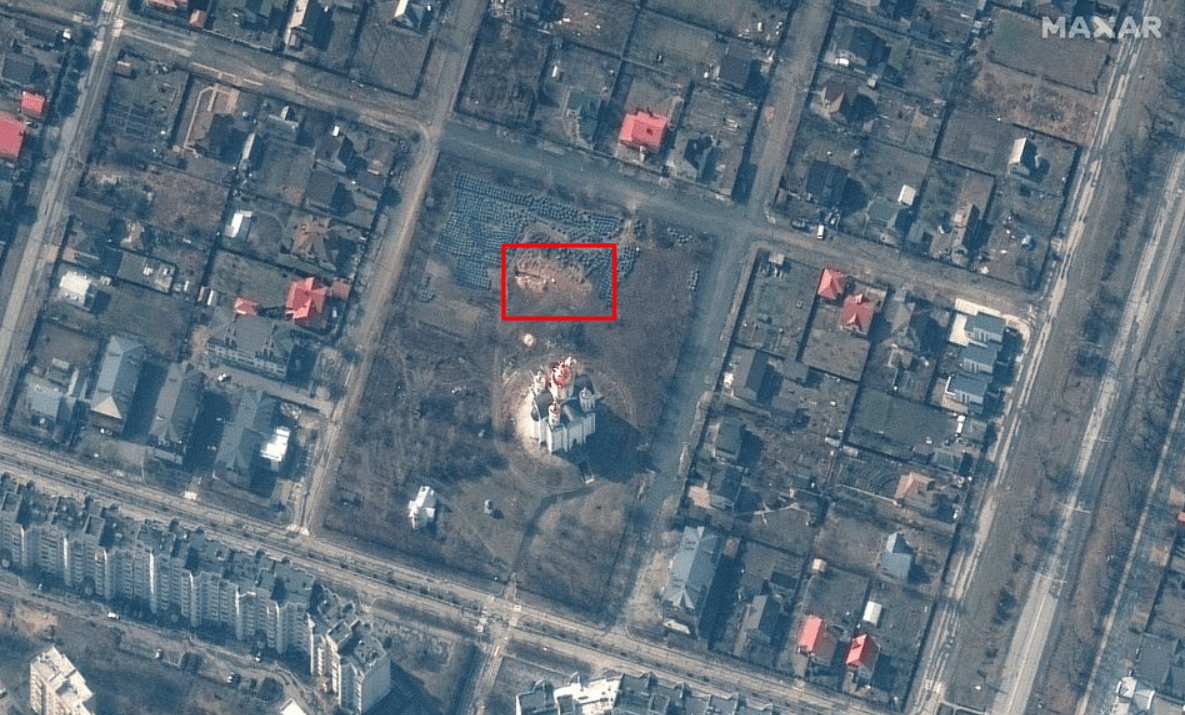 The dead bodies in the streets and those in mass graves are two separate groups of those killed. Exhumations of the bodies in the mass grave began after the liberation of Bucha in April.

The dead bodies remained in the same streets where Ukrainian law enforcement members found them after the de-occupation of Bucha. The analysis of Maxar Technologies’ satellite images, published by The New York Times, is testimony to the fact.

By examining several streets, the media outlet’s team proved that civilians had been killed and left lying on the roads during russian occupation. 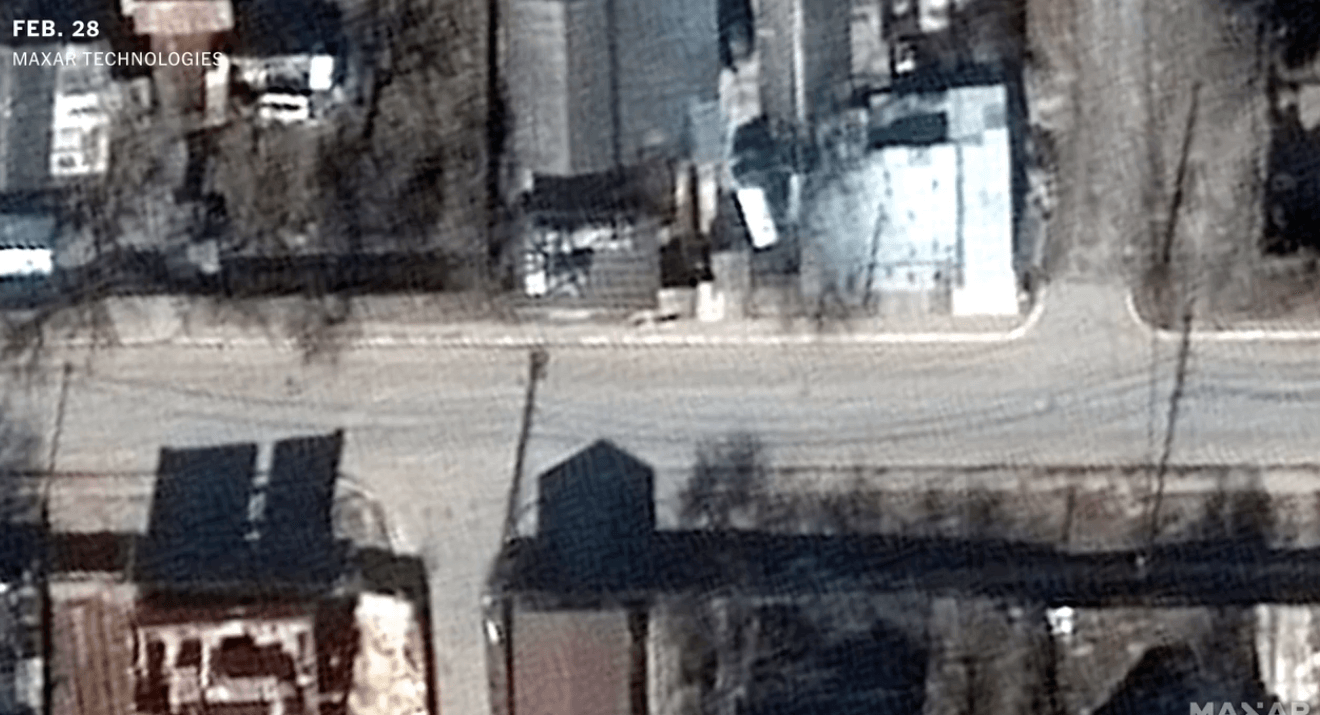 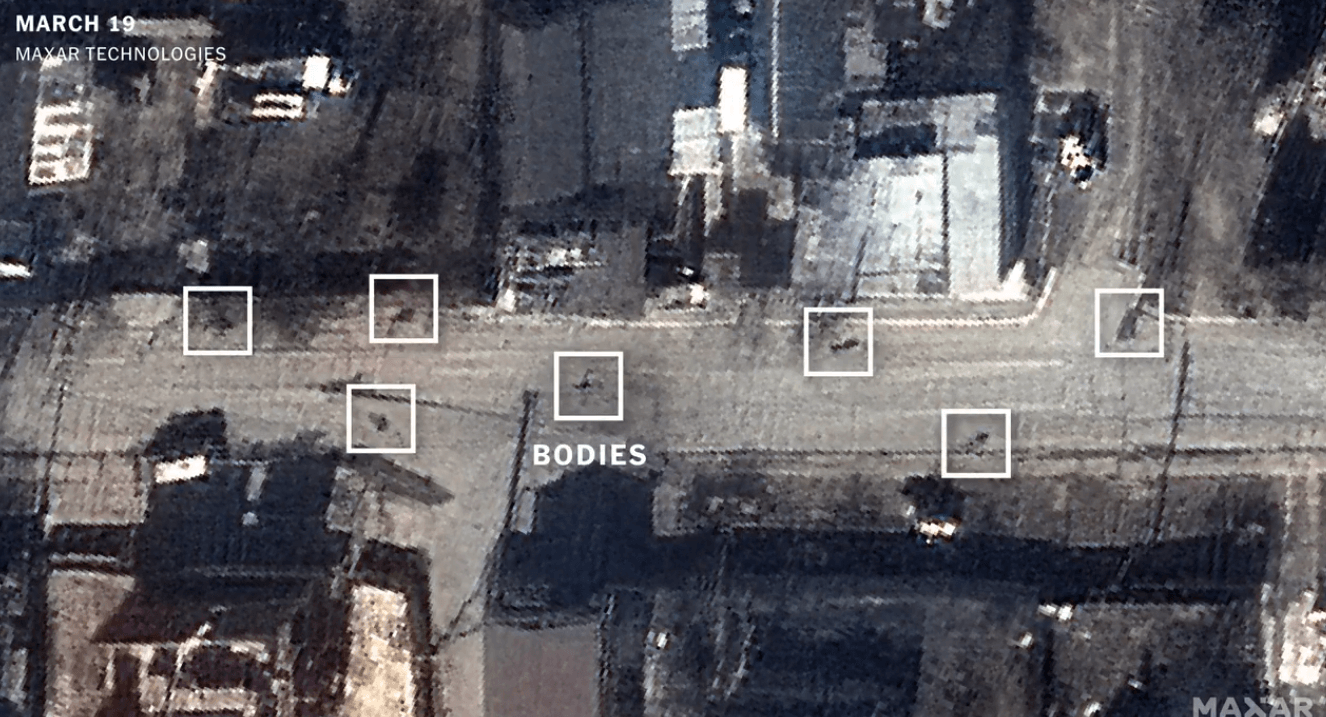 Analysis of satellite images by The New York Times

Another piece of evidence is footage filmed from a drone that Serhiy Korotkykh, a Ukrainian service member, handed over to the russian outlet Meduza. The footage was dated March 23. Meduza compared the images of March 23-30 (period under occupation) to those of April 1-2 (liberation of the town),  concluding the civilians had been killed before the withdrawal of the russian troops.

Besides the satellite images and drone videos, russia’s responsibility for the war crimes (murder, looting, rape, torture, etc.) in Bucha is confirmed by the locals who survived the occupation.

We want to remind you that we earlier debunked the fake news of the Ukrainian military firing on the homes of people in Bucha who took help from the russians. The story turned out to be entirely fictional.