FAKE: Since 2019 russians were preparing for the Ukrainian provocation with the use of chemical weapons in Ukrainian

FAKE: Since 2019 russians were preparing for the Ukrainian provocation with the use of chemical weapons in Ukrainian

Russian media spread information that in 2019 in Mariupol they were preparing for a Ukrainian provocation with the use of chemical weapons. They refer to a correspondent of the russian newspaper Izvestia , who found training plans for protection against chemical weapons at the abandoned base of the International Committee of the Red Cross (ICRC) in Mariupol. The plan seems to have been preserved since 2019, and several of its pages are shown in the Izvestia story. Then the representative of the so-called “People’s Militia of the DNR ” Eduard Basurin is quoted: that in 2019 the United States actively imported to Ukraine various weapons, including – a chemical.

We explain why this is manipulation and untruth.

ICRC training does not prove that preparations were being made for the use of chemical weapons. 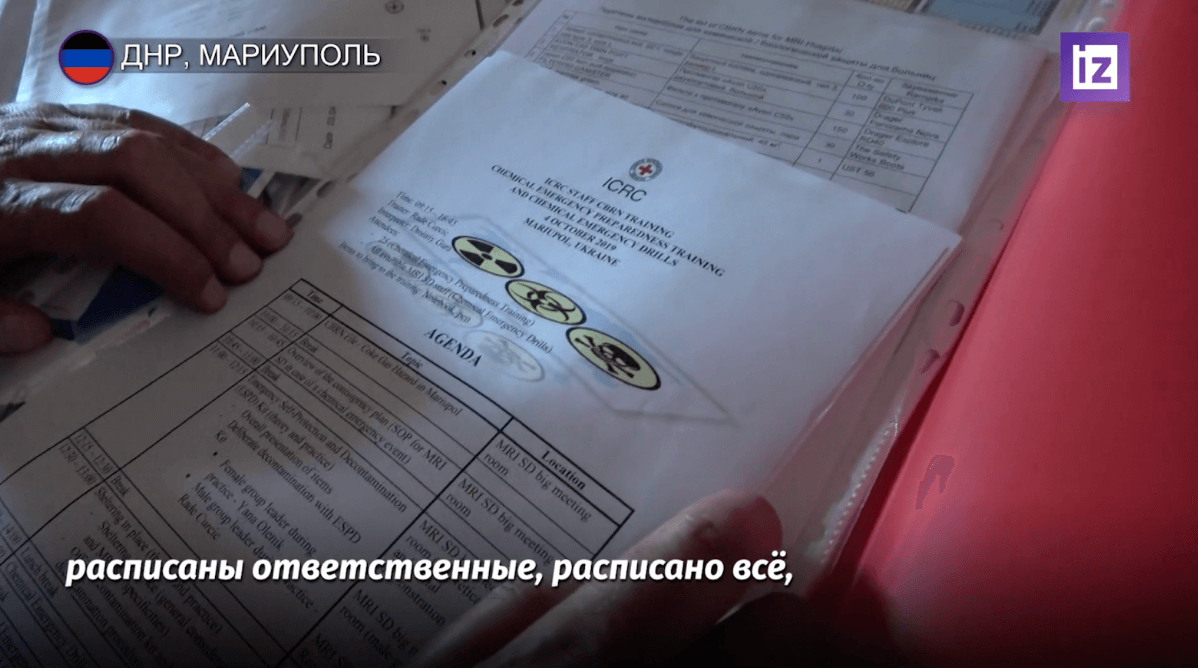 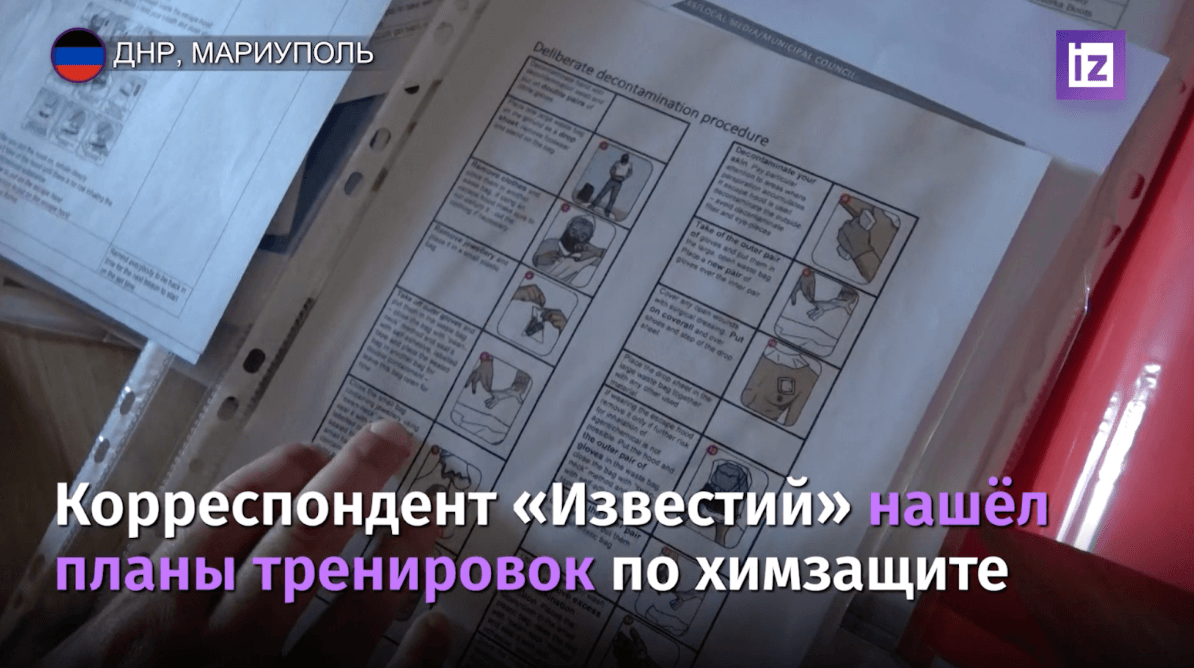 Freeze frame from video . The inscription in English: “Careful decontamination procedure”. The following is a list of rules for handling contaminated clothing and skin 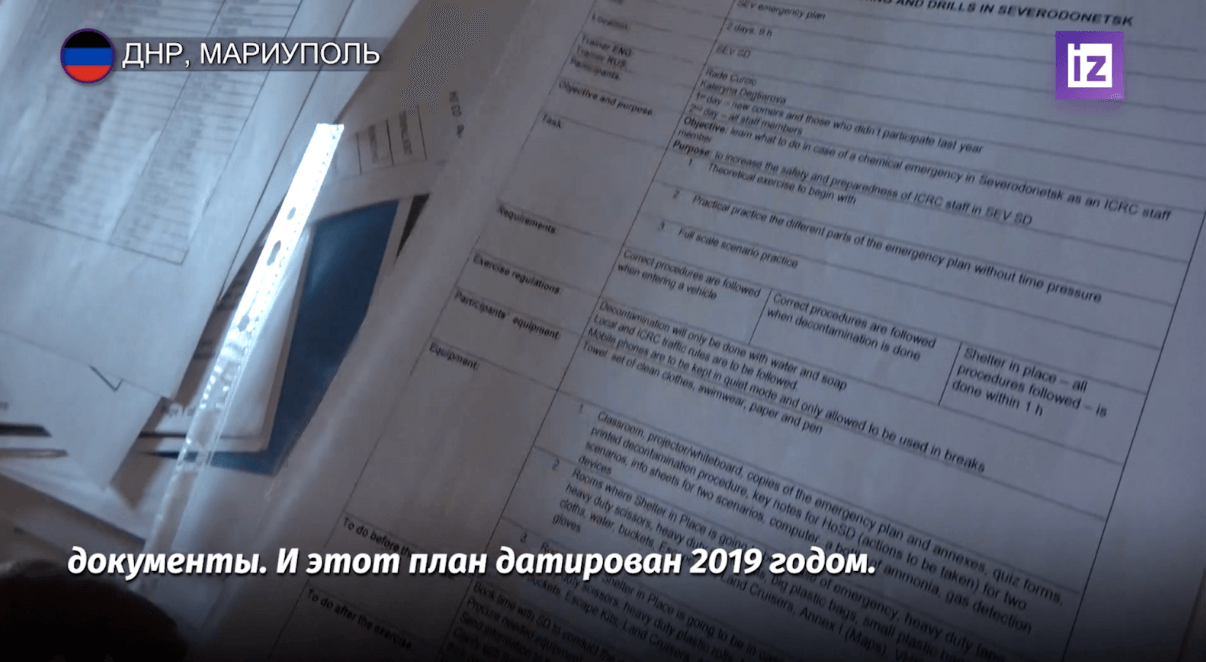 Freeze frame with video . The document refers to training for ICRC employees on actions in case of chemical hazards in Severodonetsk (Luhansk region)

The fact that the ICRC staff was trained on how to behave in conditions of chemical danger does not prove that Mariupol was preparing for a chemical attack. The ICRC is present in many countries affected by armed conflict, so it is justified that the organization prepares its employees to work in emergencies, including chemical attacks. The ICRC conducts similar information activities in all countries where it has offices and where armed conflicts continue.

The ICRC website in Ukraine states that the organization does have offices in Severodonetsk and Mariupol, among others (as well as in Kyiv, Slovyansk, Donetsk, Luhansk and Odesa).

The International Committee of the Red Cross condemns the use of chemical weapons and calls for the complete elimination of their remnants in the world. There is no reason to believe that the ICRC could have been involved in the preparation of the so-called “chemical attack” in Ukraine.

The so-called “People’s Militia of the DNR” is the “armed forces” of the militants of the russian occupation forces in the Donbas; 1st Army Corps with headquarters in rostov, russia, which is part of the 8th Field Army of the Southern Military District of russia. It is, in fact, a regular unit of the russian armed forces, formally subordinated to the “head of the DNR.”

Russia has said for years that Ukraine wants to use chemical weapons in the Donbas – and has never released evidence of this. Chemical weapons were periodically claimed in russian-controlled pseudo-republics to intimidate the local population. Earlier, the DNR said that the United States had brought to Donbas chemical weapons that cause paralysis. The Ministry of Defense and the Ministry of Foreign Affairs of Ukraine called it disinformation, and the US State Department also denied it .

Convention The Chemical Weapons Convention (CWC) is a multilateral treaty that bans chemical weapons and requires their destruction within a certain period of time. The Organization for the Prohibition of Chemical Weapons is implementing the Convention. The CCC was signed by 193 countries , including the United States, Ukraine, and russia.

In addition, the CCP prohibits signatory countries from directly or indirectly transferring or buying chemical weapons: the United States cannot transfer the remnants of its stockpiles to Ukraine.

However, even assuming that the United States could circumvent the ban, it is highly unlikely that they would agree to provide Ukraine with chemical weapons. The United States has for the first time agreed to provide Ukraine with first lethal aid – Javelin anti-tank missile systems – in 2018. Until 2022, the United States did not supply heavy weapons to Ukraine, and even in the context of a full-scale invasion, it does not always agree to supply the weapons requested by Ukraine. For example, in June 2022, it became known that the United States will provide Ukraine with American high-mobile artillery missile systems HIMARS with ammunition that can hit targets at a distance of up to 70 km instead of 300 km. Although Ukraine has asked for long-range missiles. Also, from the first days of the invasion, Ukraine asked for Western fighter jets to close the skies, but so far only helicopters have been handed over to Ukraine from US aircraft.

Cases of use of chemical weapons of the russian federation

To accuse Ukraine or the West of crimes committed by russia itself is a typical information tactic of the russian federation. In particular, to justify the attack on Ukraine.

At the same time, russia already has experience in the use of chemical weapons, and at least two cases have been proven: the poisoning of former GUR intelligence officer Sergei Skripal and russian opposition leader Alexei Navalny by Novachkom. In addition, russia may be involved in mass chemicals in Syrian cities. The Syrian government and related forces have carried out at least 300 attacks with chemical weapons. 98% of the attacks were carried out by Bashar al-Assad ‘s military and allied forces, including the russian-backed Tiger Forces.

By the way, after the full-scale invasion of Ukraine, in April 2022, it was the russian military that dropped an unknown substance from a drone in Mariupol. A military man and two civilians were injured. The day before, Eduard Basurin stated that a chemical attack against the defenders of Mariupol was being considered.

In addition, the russian military is shelling chemical companies in Ukraine, threatening the leakage of hazardous substances. For example, as a result of the shelling of the Sumykhimprom plant in Sumy, ammonia leaked.

Back in March 2022, the British Ministry of Defense reported that russia was likely to use chemical weapons in Ukraine, resorting to an operation “under a foreign flag.” This can take the form of “exposing” chemical munitions or Ukrainian agents who “plan” to attack with chemical weapons.

On March 18, Ukraine, as one of the signatories to the Chemical Weapons Convention, sent a letter to the Organization for the Prohibition of Chemical Weapons asking them to protect Ukraine from a possible chemical attack by russia.

FALSE: The COVID-19 incidence rate became zero in late May 2022