FAKE: The dead girl in a photograph from Bucha turned out to be alive and denied her death

FAKE: The dead girl in a photograph from Bucha turned out to be alive and denied her death

Facebook users shared a screenshot from Nastia Savchyshyn’s post, a girl allegedly appearing in the picture of the Bucha victims. In the screenshot, the girl denies her death.

“A post with a Ukrainian girl who “died” in Bucha had spread across the internet. The next day, the “risen” hype girl said in a post she was misunderstood, and she’s alive and well. She just wanted to draw attention to the topic. A complete lie! That’s how Ukrainians work,” wrote the disseminators of fake news.

That is not true: an entirely different person appears in the photo from Bucha. The user, Nastia Savchyshyn, was never declared dead. She simply posted a photo of herself wearing similar clothes for the flash mob: “I was killed by Russian soldiers because I was Ukrainian.”

After the Ukrainian army liberated the towns in the Kyiv region, numerous photos and video evidence of the atrocities committed by Russian troops against the civilian population appeared. Ukrainians staged a flash mob posting photos from Bucha on social networks, mainly Facebook and Instagram. The idea was to place a picture of yourself on the left, and a picture of those who died in the towns in the Kyiv region on the right, adding the following text in English:

“Hello, world! It’s me. My name is (…); I’m Ukrainian. This is my photo on the left. But this is also my photo on the right. Each of us could be raped by the russians and killed. Just because we are Ukrainians.”

The flash mob aims to draw attention to the fact that hundreds of civilians, unarmed civilians, in the town of the Kyiv region (and other localities still under russian occupation) have been killed for being Ukrainian nationals. The hashtags #GenocideOfUkrainians, #RussiaWarCrimes, #Bucha, #RussiaUkraineWar, #UkraineUnderAttask, and others have been added to these posts. You can use them to find many similar posts. 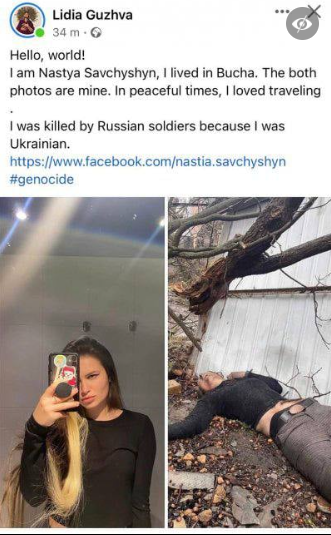 The post was made by distorting Anastasiia Savchychyn’s original post, claiming the photo collage depicts the same person on the right and left.

Nastia herself wrote: “Some people misunderstood and mistranslated the previous post! They even added their own stuff! I’m alive; everything’s OK with me! I wrote the post so that foreigners would understand the situation in Ukraine and influence it to end the war! I do apologize that my message was misunderstood and misinterpreted!” 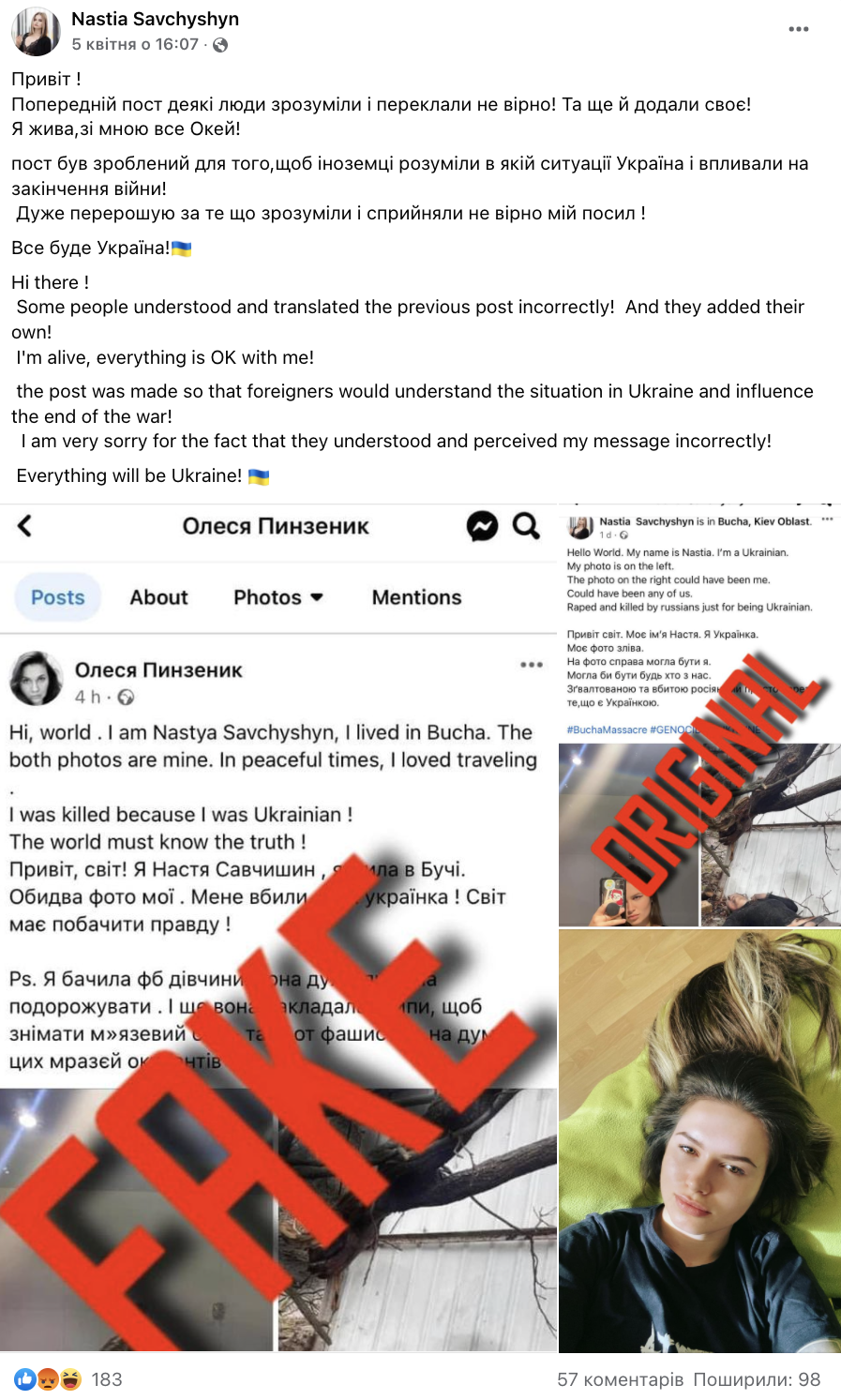 Later, Anastasiia wrote again, saying the idea behind her post for the flash mob was misunderstood. She did not deny the deaths of civilians in Bucha, Irpin, or other cities. She added that all the photos taken in these towns are genuine.

Russia claims the russian army did not commit atrocities in Bucha. However, there is evidence that russian troops killed civilians in the Kyiv region.

The New York Times published satellite images taken by Maxar Technologies in mid-March and a video released on April 2. Many bodies lay on the Bucha roads on the days when russian troops held the town. The images show human bodies that appeared on Yablonska Street between March 9 and 11. The bodies remained in this place for more than three weeks. Maxar images also show abandoned cars and bodies that appeared between March 20 and 21.

Russian media outlet Medusa later posted a drone video shot in Bucha from March 23 to March 30, 2022, proving that people were killed during the russian occupation of the city. Filmed from the air, all victims lie in the same places and in the same poses as in the pictures filmed on the ground. Several videos show military equipment similar to that used by russian airborne units (likely BMD and BTR-D) at a distance of several tens to several hundred meters away from the dead bodies.