FALSE: Photo of heavy bomb attacks on Azovstal in Mariupol

FALSE: Photo of heavy bomb attacks on Azovstal in Mariupol

This time, they’ve really gone off the rails: in despair, the occupiers started dropping heavy bombs on Azovstal in Mariupol. Video footage here. 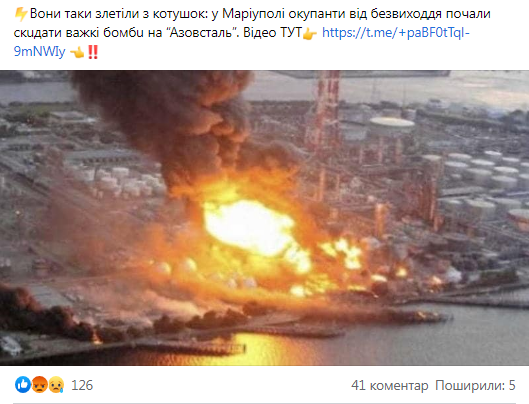 Note that the text of the news is written in a combination of Cyrillic and Latin letters (c.f., the Latin “u” is used instead of the Cyrillic “u” in the words “skudati” [drop]  and “bombu” [bomb]). The text is emotionally charged. These signs indicate that you are dealing with either a fake or a clickbait.

Besides, the posts contain a link to a Telegram channel that allegedly published footage from the scene. However, the link leads to a closed Telegram news channel, not a specific message. You must wait for confirmation from the administrator to access the channel. Such news pieces with impressive photos and headlines are spread to deceptively increase the number of subscribers to the Telegram channel.

By reverse searching on Google Images, we found a piece containing the shared photo and telling about the Fukushima 1 nuclear power plant accident. It occurred on March 11, 2011, caused by a powerful earthquake.

Tsunami waves damaged the backup generators at the Fukushima Daiichi plant. Three of the operating reactors were successfully shut down, but the loss of power caused cooling systems to fail.

As a result of the buildup of pressurized hydrogen gas, explosions occurred in the outer containment buildings enclosing reactor 1 (March 12) and reactor 3 (March 14). A third explosion occurred on March 15 around reactor 2. Touched off by rising temperatures in spent fuel rods stored in reactor 4, it led to the release of higher levels of radiation from the plant.

On April 19, 2022, the deputy commander of the Azov Regiment, Sviatoslav “Kalyna” Palamar, said the occupiers had dropped heavy bombs on the Azovstal plant in Mariupol. Reporting this information, the post’s author used the wrong image showing the accident at the Fukushima 1 nuclear power plant, not the Azovstal plant.